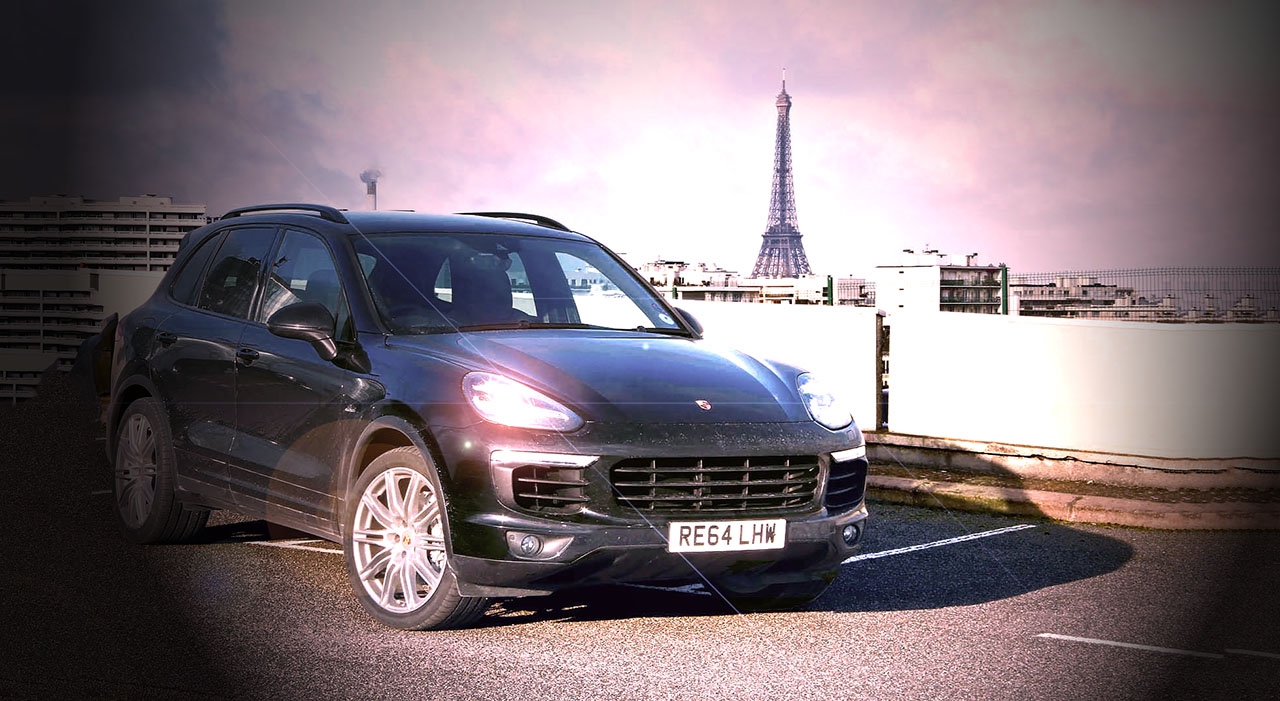 It seemed like a good idea at the time: Paris and back again in a day. We’d need a vehicle, a Porsche, naturally. And what is better at munching motorway miles during the winter months than a diesel Cayenne? Not much. During our recent UK First Drive there was one particular diesel Cayenne model within the allnew line-up that shone… the S Diesel is a V8-powered masterpiece that manages to sound and perform like a petrol. The perfect partner for a Parisian adventure? We’d soon find out. 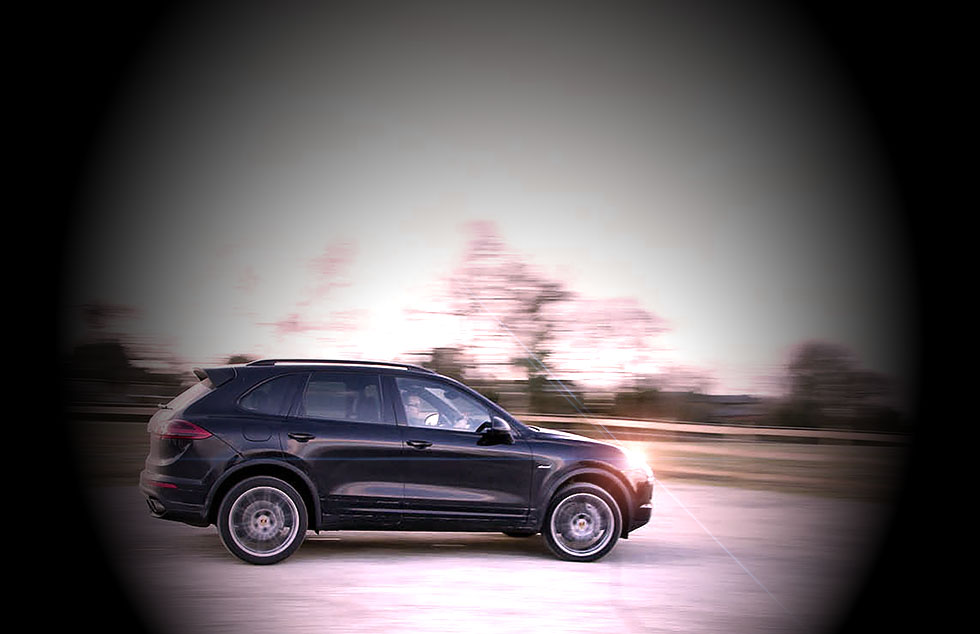 Out of bed and on the road halfway through the night before, the S Diesel immediately acquitted itself admirably, accommodating three media types and related clobber in extreme comfort. Within no time the bonnet was pointing towards France and we dispatched south-east England’s slow roads for the quicker ones with all the smoothness of fresh double cream. The early morning’s light traffic and the S Diesel’s unrelenting torque (627lb ft) made driving a pure pleasure; it felt like we’d arrived in Folkstone almost before we’d even left. Upon check-in at the Eurotunnel it was still dark out, but bacon butties and strong coffee woke the gang, and once safely parked-up inside our train carriage on the lower deck (yes, we lowered the car first via its adjustable air-suspension just to be on the safe side of head clearance) there was time to assess this SUV’s inners.

Cosseting bodies in premium luxury is, of course, something Cayenne has done well since day one and this all-new version takes things further still. Comfort and convenience features have been polished and perfected by Porsche to provide a cabin that is most definitely ergonomically distinguished. Everything falls easily to hand and boasts that reassuring and robust Porsche build quality. Drivers are now treated to a new multi-function sports steering wheel with gearshift paddles fitted as standard, much akin to the design of the 918 Spyder’s wheel. A redesigned rear bench means passengers in the back are comfortable too, and our test car had electronically (count them) 18-way adjustable front seats. Pure opulence. If you can’t get comfortable in this car then I’m afraid there is something medically erroneous going on. Stylish design and unrivalled quality feature in here now, so it’s more than a match for that of the Macan.

Thirty-five minutes after setting off from Kent we arrived in France and were thankfully no longer reliant on train tracks to make progress. In Coquelles it was still dark, but there was an added unwelcome element of excitement waiting – snow. A lot of snow. Unlike in the UK, it seems the French don’t always feel the need to spread grit on their motorways, and within minutes of leaving the terminal we were faced with supremely icy slip roads and autoroutes reduced to single lanes of crawling traffic. Not a good start. Sure, the Cayenne’s all-wheel drive capabilities were enormously reassuring, but over two-tonnes of Porsche on ice can easily become a pendulum of peril no matter how proficient it may be during a cold snap. We passed the scene of a nasty collision that brought it all home, before making happier advancements on fully treated roads. We were back on track.

As the sun came up the Cayenne marched on, tracing France’s featureless northern coastline, and stretching its legs up to eighth gear and full speed without so much as a grumble. Charging the uncharismatic ‘L’Européenne’ (read A16 autoroute), we cleared the town of Abbeville on the River Somme and joined the A16’s ‘Autoroute des estuaries’. It may sound lavish but this part of the world is devoid of many topographical undulations to excite any intrepid voyager. Despite looking like a road with its genesis hailing back to World War II, built simply to move German heavy artillery from Paris to the Channel (and onwards), this road was only carved-out in the 1990s. They could’ve put some bends in, perhaps…

Early February’s golden morning sunlight ricocheted off the Cayenne’s new svelte (tucked and tweaked) stature when we had to make a quick pit stop – required by us, not the car. When an older generation Cayenne pulled up nearby in the service area, the winter glow really highlighted those subtle tweaks Porsche has made, despite our car already being caked in a layer of salt, and sporting a stylish snow moustache. Porsche says the new Cayenne is shapelier than before, with sharper front bodylines and pronounced protruding arch work, and we’d agree. Out back a new rear spoiler and curvaceous light clusters are the big giveaway that you’re looking at the new model over the old one, unless you’re a skilled and passionate Porsche spotter. Noticeably, new veins in the front bumper turn to direct air to the intercoolers as required. Four-point LED daytime running lights and headlamps are strikingly contemporary additions to the new model too.

Miles of A16 autoroute flowed under the Cayenne’s front bumper before we saw Paris on the horizon at our 12 o’clock. Happily it wasn’t far off 12 o’clock, which meant it was almost time for lunch in one of the most hyped culinary cities on the planet. There was just the small matter of central Paris traffic to contend with first. Whether it was the Cayenne’s satellitenavigation system (unlikely) or our terrible sense of direction (more likely), getting into the city centre from the external ring roads proved stressful. The Cayenne’s mass had moved from being an autoroute ally to a Parisian pain and we had to pull the ‘Brits abroad’ card and muscle our way through aggressively a few times. Luckily the Cayenne has presence – plenty of it. Fitting through the entrance to our Paris car park with around five-millimetres of room each side of the vehicle was probably the least enjoyable moment of the trip. While the V8 cooled off, we partook in a delicious steak lunch served within a few blocks of the Eifel tower. It was most agreeable, and with business attended to it was soon time to squeeze back out on to the roads.

If getting into Paris was something of a waking nightmare, getting out was worse. We probably didn’t help ourselves by first steering the Cayenne towards the Arc de Triomphe at Place Charles de Gaulle, but it had to be done, right? Circling the Arc de Triomphe, as you’re probably aware, is not for the faint-hearted – it’s one of the world’s most chaotic roundabouts. In fact it is seemingly reserved solely for partially restrained psychiatric patients and convicted murderers with a death wish. Traversing it in a large black SUV wearing British number plates is, relatively speaking, a Parisian hate crime. The famous monument sits in the middle of a dodecagonal arrangement of 12 avenues that run off from it in different directions. Ultimately it’s the roundabout from hell. Navigating Place Charles de Gaulle required my two co-pilots to act as additional eyes and ears, and at times it felt like we were trying to float the RMS Queen Mary 2 down the Norfolk Broads. I don’t know how, but we managed to survive…

Darkness fell once more as we headed home up the A16, and as the two co-pilots, exhausted from sitting, eating and navigating, fell asleep, I was gifted time to ponder the Cayenne’s outstanding capabilities. Make no mistake this car is an absolute weapon. Not only is it fast, with monstrous torque available whenever you need it, the S Diesel is also incredibly refined. Sadly this engine will be one of Porsche’s last V8s, although the Cayenne and Panamera will receive an all-new V8 engine in future. Whether this will be the last diesel V8 we aren’t sure, and the fact that this engine is the only one in the allnew Cayenne range which does not comply to Euro 6 legislation (rather this is a Euro 5 engine), suggests it may be the final fling for Porsche in this field. If that is the case it’ll be a real shame. Every Cayenne model is supremely capable, but the S, with its big heart, is monumental. It’s economical too; we travelled from London to Paris to London (approximately 500 miles) on a single tank of fuel. We achieved the stated mpg in the mid-30s, which for a machine that weighs this much, has 385hp on tap and can hit 62mph in 5.4-seconds – well, I think that’s pretty damn impressive! At £61,474 the S Diesel also represents something of a bargain in Porsche terms, warranting consideration even from those in the market for a petrol model.

Safely back on UK soil, we pondered what we had just asked of the Cayenne and marvelled at how this sporty SUV simply takes everything you can throw at it in its stride. It gets up and goes. Put simply it’s easy to forget that Porsche has only been producing SUVs for just over a decade, especially when its offerings are this well accomplished…

This car is an absolute weapon. Not only is it fast, it is also incredibly refined.

The presence and prowess of the new Cayenne was useful journeying to, and through, Paris. 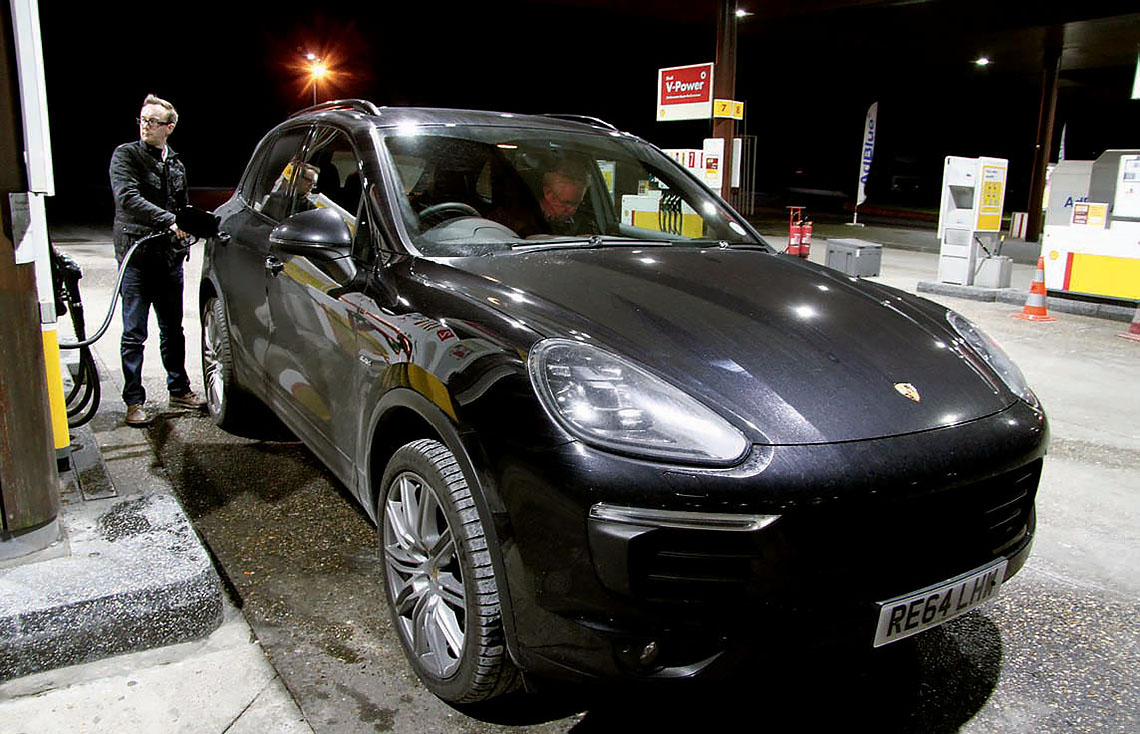 Left: Through darkness, snow, rain and sunshine, the Cayenne S Diesel made the perfect partner for our Continental jaunt. The winter glow really highlighted those subtle tweaks Porsche has made.