Colin Chapman wanted a road car that was easier to build and with less fragile and costly componentry than the troublesome Elite. It was hard to achieve torsional stiffness in an open car with a glassfibre monocoque, so, with designer Ron Hickman, he devised a clever folded-steel backbone chassis to stiffen the GRP shell while adding a minimum of extra weight. With soft, long-travel suspension, it made the Elan one of the best-handling cars ever, with a fine ride too. The new Lotus was announced in October 1962.

For the engine, Chapman and his friend Walter Hayes at Ford conceived a dual-overhead camshaft conversion of its new oversquare small ‘four’. It was to be used in Chapman’s latest model and in a saloon that Hayes wanted to boost Ford’s image with race wins. Former Coventry Climax designer Harry Mundy drew up the brilliant twin-cam head and JAP was contracted to build the engines; assembly moved in-house in ’1967.

Hickman’s styling was simple yet elegant, with faired-in bumpers and pop-up headlights. A Coupé was added in ’1965, styled by John Frayling, but Hickman again took charge of the Elan +2, a longer, wider and more sophisticated fixed-head for families. While all of this was going on, Lotus was winning F1 World Championships and moving its factory wholesale from Cheshunt to Hethel. Up until the +2S of ’1969, all Elans were also available in kit form for home assembly.

Chassis rot was inevitable and most survivors have had theirs replaced. Elans can be reliable if well maintained, and have even been known to clock up 750,000 miles, but not all have been so well cared for. Beware neglected cars, and sought-after models built up from parts – check the history and specification carefully. Originality is now highly valued and converted cars such as chop-top +2s are becoming orphans.

If a car needs a chassis, consider the ancillary work, rebuilding suspension and perhaps running gear, plus all the labour involved. Elan prices are rising, but, unless you do the work yourself, there needs to be a big margin between the purchase price and the value of a pristine car. A tired shell can be even more costly to refurbish, because GRP repair, while straightforward, is labour-intensive. It may well be best to replace a rough body with a new one rather than spend £10k repairing and spraying it. And beware the recent paint-job – has it been done thickly over cracks and crazing, and was it prepped properly?

Twin Cams became steadily stronger and more powerful, but Stromberg carbs fitted to meet US emissions regs are less desirable (you can’t bolt Webers onto a Stromberg head). Check for 40psi at speed, 20psi at tickover and no excessive blue smoke, knocks and rattles. Does it look clean and well maintained? A rebuilt unit costs £5-6000.

Hood should look good and fit snugly. On early cars it sits on a complex set of GRP mouldings and steel rods; S3-on is much simpler, and costs £419 in Everflex.

Cooling is vital with an aluminium head, and the water pump can be weak. Ensure electric fan works, but isn’t on all the time, and check for oil in coolant and vice versa.

Seat frames rot and break as damp gets in. These are S3 seats, with different trim pattern from S2. Specialists have reintroduced most plastic trim sections.

Vacuum operates pop-up headlamps: check they work, and look for crazing and poor panel fit throughout. Glassfibre repair is costly unless you do it yourself.

Almost all Elans have the superb Corsair 2000E gearbox; late models have a five-speed built by Lotus with Maxi gears. Check for synchro and bearing wear.

5 Door hinges for wear and/or weakness

An Elan should feel lively on the road, with a good spread of power through the rev range. The Twin Cam is reliable if well maintained, most critical being the cooling system and the danger of head corrosion with insufficient inhibitor.

Check for leaks around the water pump: rock it to see if the bearings are worn. A ring of bolt heads around it indicates conversion to a removable water pump, a definite plus. Otherwise you have to take off the head to access the pump.

Being on the original chassis isn’t a bonus, because, even if not rusted, it’s likely to be weakened by cracks. The ultimate replacements are those made by Lotus (optionally galvanised), stamped ‘LR’ for ‘Lotus Replacement’. Spydercars’ are also excellent, with extra stiffening and the facility to drop the sump and propshaft.

The front suspension used Triumph Herald components; it wears, but the parts to rebuild it as-new are cheap to fit. The rear set-up, being unique to Lotus, is a more complex proposition and the poor quality of replacement rubber doughnuts has led many to convert to CV joints.

Given the age of the cars and the need for almost all electrical items to be double-wired – that is, earthed back to the chassis – electrics can give problems, so check it all works. Fixing may be simple although damp can wreak havoc.

There’s still little that can stay with a sorted Elan on a twisty, bumpy back road. They’ve all shot up in price, but FHCs go for circa 20% less than DHC or Sprint. Nimble Elan’s cockpit is roomier than you might imagine.

“I bought this 1964 S2 in ’1969 in Canada for $1100 (about £250),” recalls Battrick. “I was 25 at the time. I’d had a TR4A before, which felt agricultural in comparison. The Elan is visceral: even driving down a straight road you feel as if you’re on the edge, it’s fire and brimstone. The front is hard but Colin Chapman put soft struts on the back, which makes it comfortable. When I returned to England in 1972, I converted it to right-hand drive. It was in terrible condition. I fitted a Spyder chassis and a new shell from Boss: the car had been crashed before I bought it – the new body was half the weight and twice as stiff. The doors, bonnet and bootlid are original, as is the running gear, but the seats and colour are S3; it was originally black. I have a 911 as well: they are totally different!”

The Rebuilding of a Lotus Elan Elanman, Brian Buckland

Sweet styling, a stiff monocoque and tasty twin-cam plus five speeds made the Alfa a fine sporting car. Performance was always well behind the Elan, but S2-4 are now better value.

The TR was keenly priced with a smooth ‘six’, versatile overdrive gearbox and injection, even if its traditional chassis construction was decades behind the Lotus. Fun, in a different way.

Against: Not for those who want a shiny new pin.

This S3 SE is incredibly original, and received a new Lotus galvanised chassis in the 1980s. It has never been repainted, so the body is variously stress-cracked, star-chipped, microblistered and rubbed through, with a few tiny nibbles out of the glassfibre. But it is utterly charming. The doors have not dropped, so there aren’t the usual marks on the sill tops. The wheels have some surface rust and the nearside rear rim is a little dinged.

Inside, the vinyl and centre console are good with no cracks. The factory carpets have faded and are worn through and coming adrift at the sills. The dash varnish is cracking slightly, but it retains every original switch plus the gearknob and steering wheel. Everything works bar the left electric window, and the roof is in good shape.

The motor still has its air trunking, with new items such as carb tops, heater valve and starter solenoid. Only the oil-filler cap is non-original, presumably as a result of a repair to the neck.

It starts easily, idles sweetly and drives beautifully, possibly the nicest Elan you’ll ever have a feel of. The controls are light and easy with no slop, the engine is eager with a spot-on exhaust note and a solid 42psi oil pressure (at 75ºC), the gearchange easy and the brakes pull up straight.

There’s a fantastic history file, too. It is a joy to behold and we wouldn’t change a thing: to paint this reference car would be a crime. It needs to be preserved, so we’d call £30k too cheap. PH 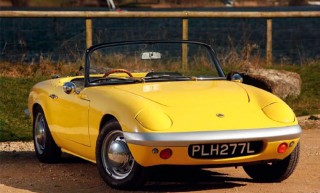 A good Elan, of any model, is an absolute joy to drive and a pleasure to own. Plus, it’s more spacious and practical than it looks. The ideal is a car with full history and a sheaf of bills from respected specialists. Chassis and even body replacement doesn’t harm values, but nonoriginal spec, apart from reversible sensible improvements, does. Choose carefully.