Though it retained the name and overall look of earlier models (and a handful of pre-production cars were built with 4.2-litre engines), the Series 3 V12 was a very different car. It was less road-racer and more luxury cruiser, but with pace to match or even exceed its predecessors, delivered with smoothness and sophistication. Frustrated by the American market’s obsession with cubic inches and V8s, which put many off buying an E-type due to it having ‘only’ six cylinders despite its superb performance, Jaguar dusted off an old four-cam alloy V12 Le Mans engine proposal, gave it compact single-cam heads and squeezed it under the E-type bonnet; the 5.3 V12 is just 39kg heavier than the 4.2 ‘six’.

Extended wheel-arches accommodate a wider track and wheels with low-profile tyres; the original short wheelbase was dropped, the roadster body being stretched to fit the same wheelbase as the 2+2 fixed-head. The vast majority of panels were different, especially on the roadster. Some unspoiled, rust-free, low-mile cars can be found in America, but remember that US models were different in more ways than just big overriders on later examples. They had low axle ratios to give acceleration to match the V8 bruisers – with a 55mph speed limit, this didn’t matter for top speed, but back in Europe these cars really benefit from a higher axle ratio or the ‘overdrive’ five-speed gearbox conversion. They also had progressively more restrictive emissions equipment, sapping power. Many have been imported and converted; RHD chassis numbers began 1S1/1S5 (roadster/2+2), LHD 1S2/1S7. Silver-painted steel wheels were standard at first; chromed steels or wires were optional. Other options included air-conditioning, Sundym tinted glass, a hardtop for the roadster and a heated rear window for the 2+2, plus automatic transmission for both iterations.

While roadsters were generally cherished and little-used, Series 3s, especially 2+2s, became cheap cars for a long time, seen as the poor relation of the E-type range. Fuel consumption in the teens meant that they rarely became everyday hacks, but neglect of servicing and poor storage wrought havoc for many. Check a car’s history and the quality of any restoration work that’s been carried out, because while there are many fine examples out there, there are also lots of horrors lurking under shiny paint.

BULKHEAD AND ENGINE FRAMES Look for rust and accident damage, which can be costly to put right. Check bonnet alignment, too

FLOORS AND SILLS Rust can cause distortion of the bodyshell, especially on roadsters, so check for even door gaps

GEARBOX Check for signs of wear: slurring auto ’boxes and manuals jumping out of gear

REAR AXLE Ensure it’s not noisy, too low ratio, or has seized brakes or ineffective handbrake

INTERIOR Retrimming can be costly

RELAYS Fans, starter, horn and air-con relays corrode internally, but can be recommissioned

Pale Primrose was on the E-type colour chart from 1963 to ’1974; the V12 manual roadster was the cheapest model when new, but is the most sought-after today.

The V12 E-type is a consummate cruiser, the engine delivering a huge spread of torque that makes the gearbox almost superfluous – yet it can accelerate faster than any earlier E-type when needed, and only inferior aerodynamics make its top speed marginally lower. It’s reliable if well maintained, too – albeit thirsty.

Neglect haunts the V12: when looked after they’re usually trouble-free. A siltedup cooling system (from inadequate corrosion inhibitor) leads to overheating and warped/cracked heads. V12s should have a 7S-prefix (some get swapped), and oil pressure should be 60psi+ at speed; watch out for leaks, knocks and smoke. 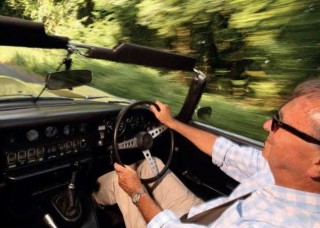 Soft-tops were vinyl; many have been replaced with mohair but it doesn’t always fold well. A cover for the folded hood was supplied when new.

Layshafts and synchros wear on manuals: check the change and listen for noise in neutral. Look for clean fluid and smooth changes on autos.

The V12 was the first to use Lucas OPUS electronic ignition. Engine heat can kill it, so most have been moved out of the vee and/or replaced.

The V12 E-type has huge torque throughout the rev range and should feel effortless and totally untemperamental to drive. If it doesn’t, something is not right. Check what electronic ignition is fitted – the Lucas OPUS is rarely still in place, but can be recommissioned for originality. Don’t ignore a misfire – it may denote a dropped valve or a cracked head.

Oil pressure at speed should be at least 60psi; if it’s lower, listen carefully for rumbles and knocks that may indicate an engine in imminent need of rebuild. Excessive oil leaks and breathing are also sure signs of a worn engine. Replacement with a fuel-injected XJ-S unit is possible but complex, and this may affect the car’s value in the long-term. The Stromberg carburettors give trouble when old, but are easily rebuilt with new diaphragms and so on – a rattle at the front is the timing chain, which is not such a big job.

When driving, the car should feel comfortable and not excessively wallowy. Worn dampers and bushes ruin ride and handling, but are not expensive to replace: parts supply is superb and competition keeps prices keen. If the rear end needs to be dropped, for attention to the brakes, handbrake, drive couplings or axle ratio, costs mount unless you do it yourself because it’s a time-consuming job, and it’s worth doing everything while it’s down. Rear brakes and the handbrake often seize, and discs rust, due to infrequent use. If wire wheels are fitted, check for broken spokes and worn splines.

With a VW Scirocco Storm and a BMW Z4 already in his garage, Paul Cooper added his V12 E-type in ’06 when the previous owner emigrated: “He was an engineer who had labelled every hydraulic line with the date when he’d replaced it – he had done all the hard work and said he didn’t dare keep the bills in case his wife found them! It had been stored for a few years, so I spent around £1000 to get it an MoT and have enjoyed it since. Three years ago it had a misfire that turned out to be a stuck valve – when the head came off, we found that the valve seat and head were cracked. I searched a long time for a replacement head, before buying a pair for a good price from The Jag Workshop. They were rebuilt, with new manifolds – which tend to crack – and I’ve had no problems since.”

Bags of torque means an effortless drive, but it shouldn’t feel wallowy. Tired bushes and dampers hurt the handling, but new ones won’t break the bank.

An attractive sharp suit by Frua turned the Cobra into a sophisticated roadster or coupé, but the unprotected steel/alloy body over steel tubing rots readily.

With a range of V8s from 165 to 425bhp, the C3 was a blunt instrument but could be as fast as a V12 E. Under the plastic body, the steel structure can rust.

A good V12 Jaguar E-type is a remarkably sophisticated and usable ’70s performance car – and it’s not expensive to keep it that way. Roadsters are not excessively costly compared to contemporaries with similar performance, while the 2+2 is still a bargain, at a little over half the price of roadsters. Just beware of neglected, tarted-up cars – try plenty and buy with your head, not your heart.

The effortless V12, plus more space and softer suspension made the S3 a usable all-rounder. Exceptionally well served by specialists and clubs

High fuel consumption is the penalty, especially if you use the performance. Neglected cars can cost a lot to put right

Brakes 11.2in ventilated front, 10.4in solid rear discs, with servo

For Good condition and well sorted

This home-market 2+2 was bodily restored in 1990, and repainted again in its present tenure. All of the structure looks solid, with clear sill drains. As well as a Heritage Certificate showing it’s in its original colour, it comes with its original handbook and various bills dating back to the ’80s. A 1985-dated MoT shows 90,496 miles.

It presents very well, with only a couple of tiny dimples and runs in the paint that you have to look hard for, and good chrome. The doors need a slam on new rubbers and the wheels – shod with well-treaded Mohawks – look newish. It was retrimmed at the same time as the repaint and the perforated leather is all good. The windscreen is slightly delaminating, but that’s normal.

The motor is tidy, with no leaks and clean oil; the coolant level is good, and the ignition module looks to have moved from the middle of the vee.

The best part is how it drives: super-smooth, well sorted and untemperamental. The ride is well-controlled, with no wallowing, oil pressure is 60psi on the move, and temperature sits a third of the way up the gauge. All the synchros work well, and with rebuilt calipers the brakes pull up straight. The only mild annoyance is a slightly pulsing pedal, but a few hard stops may help that.