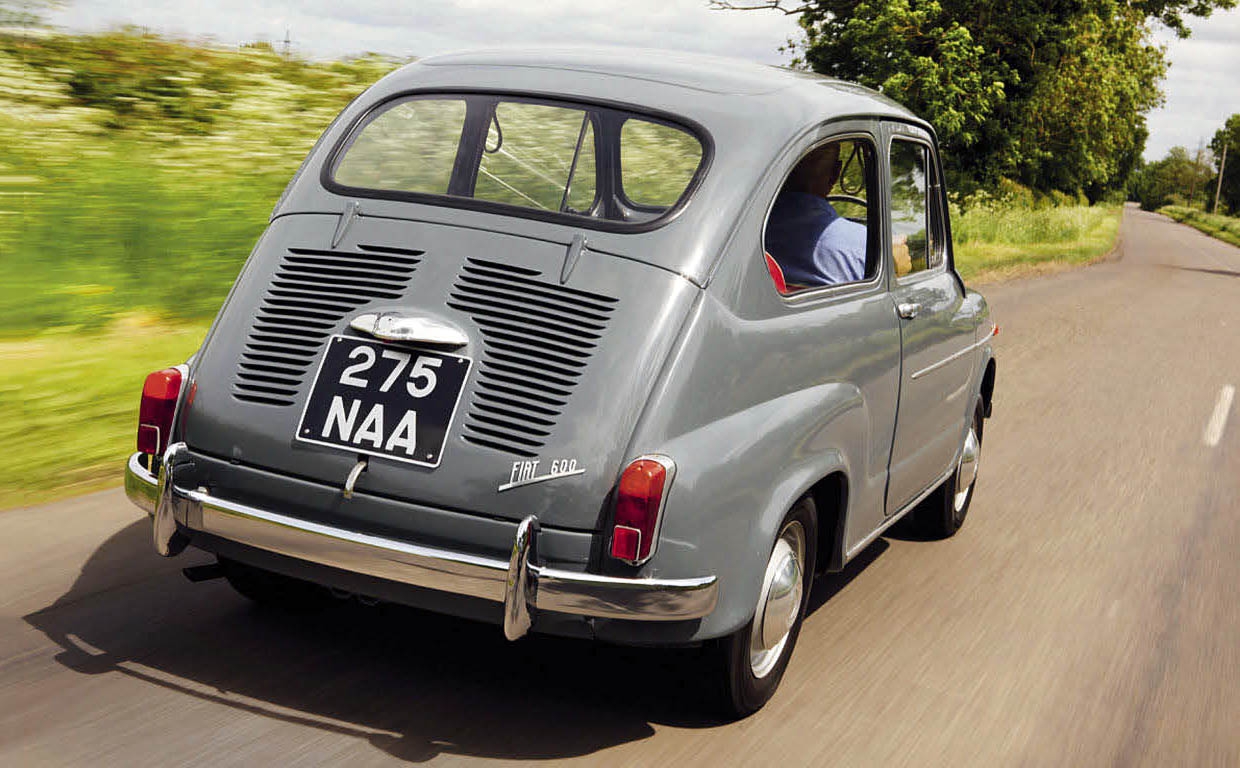 Buyer’s guide Fiat 600. Why Fiat’s perfectly packaged 600 is a better bet than a Cinquecento. The compact but highly practical 600 is a true Italian classic, says Malcolm McKay. Photography Tony Baker.

Scarce in the UK but sold in huge numbers and built for more than 30 years, the 600 is in many ways superior to the cheaper and more compromised 500. Dante Giacosa excelled himself with the 600: there was something wonderfully decisive about choosing a wheelbase of exactly 2 metres, and using it to build a car shorter than The Topolino but with twice the interior space.

Despite its diminutive engine size and overall dimensions, the 600 really was a ‘proper car in miniature’ – monocoque construction with four seats and a four-cylinder, water-cooled engine. It had 12-volt electrics, flashing indicators, twin electric wipers, heating, stalk controls for lights and indicators (from 1957), an interior light and a lamp in the engine compartment as standard – all rare on economy models of the mid-’50s. The Fiat had a remarkably spacious interior for its size, was also available as a Convertible with fulllength sunroof and had all-round independent suspension, with semi-trailing arms at the back.

The 600’s floorpan was so good that it inspired numerous small-volume spin-offs, notably the gorgeous ‘double-bubble’ Abarth 750, the rapid 1000TC, plus the Bialbero and Monomille sports coupés. Giacosa used it for the forward control 600 Multipla – an adaptable vehicle that could be transformed from a six-seater minibus into a flat-floored van in minutes. Ghia produced roofless Jolly 600s and Multiplas, while Autobianchi came up with the Stellina two-seater sports car that surely inspired Fiat’s 850 Spider.

Original right-hand-drive 600s are now rare in the UK and, among the left-hookers, you’re as likely to see a Serbian-made Zastava or Spanishbuilt Seat as an Italian-factory Fiat. Differences are not great, except that Seats were produced up to ’73, four years after Italian manufacture ended (plus there was a stretched four-door 800 from ’64-’67), and Zastavas up to ’85, with 843cc from ’79. Both used some different components (even wheel bearings on the Zastava) and are worth significantly less than genuine Latin-built 600s.

They rust everywhere, but it’s best to walk away if the chassis legs have gone. You can easily spend more than the car is worth on restoration. Parts availability is good (though trickier on early cars) and there are many options for uprating with original tuning parts, or more modern ones. In ’58, the Abarth 750 would get to 60mph in 22.7 secs and top 80mph – but it cost more than a MkII Ford Zephyr in the UK.

The 600D engine was significantly smoother and quieter than the earlier unit and noticeably more powerful, though both feel hard pressed and make plenty of noise with a full load uphill. Excessive rattling can be down to worn spacers between the valve rockers. Gutless performance, if not accompanied by excessive smoke indicating worn bores, may just be a tired or maladjusted carb. Check the heater blows warm air without fumes, especially when the engine is still cool.

The easiest uprating method is to drop in a 70bhp Autobianchi A112 Abarth motor, though it will need a front rad to keep it cool. First-series 850 engines look right, but rotate the opposite way, needing clever mods to avoid four reverse gears and one forward. Late Seats and Zastavas may come with larger engines, but were cheaply built and invariably thrashed, only recently becoming collectable in their home countries.

The ride was always fairly hard and bouncy, but the handling was good, with predictable understeer gently increasing with more throttle. Wayward behaviour indicates wear in the steering box, idler, linkages and kingpins; all can be rebuilt except that new gears are NLA for the steering box, so a good second-hand unit may be required. A conversion to a double-wishbone front end with coils is available for £834. The drum brakes are fine for standard cars, if well-maintained; upgrades to front discs are available (at £594). A transmission handbrake was fitted until November 1959. It should only be used when stationary and is prone to leaking oil inside the drum, which is hard to cure.

“I bought this 600 in 2009,” recalls Cerrone. “Tony [Castle-Miller] at Middle Barton Garage Told me about it – it’s done just 19,000 miles from new and was off the road for 30 years. It had its last MoT in 1972 when it was less than eight years old. I’ve spent a fortune on it, but it’s just about finished now and is running in. “You can get most of the parts; fortunately almost everything on this car is original, although the new badge on the front is plastic. I’m not as confident with it yet as I am with my Multipla – I’d drive that anywhere – but it’s a lovely little car. It really just needs to be used, after being laid up for so long. I also have a Fiat 500 saloon and three Giardinieras, so you could say I’m fanatical about small Italian cars!”

This delightful 600D is in fine fettle. There’s no paperwork to confirm the mileage, but it tallies with the condition and vendor Garry Shortt says that it’s correct according to the former owner. The car is on Italian plates but will be UK-registered once it has a fresh MoT (due after our visit) and comes with a letter from Fiat’s homologation executive to confirm when it was built.

The 600D was repainted before it came to the UK last year and is mint bar a few chips on the lower driver’s (suicide) door hinge and a surface rusted crack where it shuts. The brightwork looks to be original – with minor pitting that you barely notice – and both bumpers are immaculate.

There are a few tiny marks on the factory vinyl upholstery and a small crack in the wheel. If anything, it’s even better underneath, where it has been thoroughly refurbished. The critical chassis legs are perfect at both ends, as are all of the suspension parts, and everything has been properly sealed. The exhaust appears recent, likewise the barely worn 145×12 Sava Effectas. There are no obvious engine leaks, or any signs of oil and coolant mixing. The lubricant was a bit dark, but the car will be serviced before sale. The engine starts eagerly after churning, with no smoke. It’s a little lumpy from cold, but soon settles and picks up quite well as long as you rev it. The steering is sharp, the gearchange slick and the brakes progressive, with a firm pedal.

Decades of neglect, bodging with incorrect parts and poor rebuilds make finding a good 600 a challenge; if in doubt, ask a specialist to inspect it. Early cars are cute but slow and hard to source spares for; a 1964/’65 600D may be the ideal choice. Find a good 600, and you will have a fun, practical classic whose all-round abilities will surprise and entertain you.

• Highly usable and practical (off motorways)

Michelotti-styled saloon, coupé or ragtop with a ’bike derived 700cc flat twin in the back that helped to save BMW from collapse. It’s fun to own and drive, with decent parts support, and easily tuned for motor sport.

A novel continuously Variable transmission using belts and cones enabled the rear-drive DAF to live nearly 20 years, despite its air-cooled flat-twin: initially 590cc; up to 746cc from ’62. Rot and parts availability are the main issues.

Basic but chic and quite roomy; this is a rare RHD survivor.

In its element – on a fun back-road trip where you’ll revel in the handling and won’t mind the lively ride.

Clever Multipla converts from six-seater into a roomy van 600 outruns A35 trio through Madgwick, Goodwood, ’58

The 633cc engine was basic, with a non-counterbalanced crank, but the 767cc unit Was much improved and has easier parts availability. They last well if looked after, but show their age with smoke, excessive oil leaks/breathing and rattles. Check for signs of water/oil mixing (emulsion under filler caps) indicating a failed head gasket. Replacement instruments and warning Lights – of which there were seven – are hard to find; the latter were shared with various Ferraris including the 250GTO! Cooling relies on fan and a thermostat-operated flap underneath that opens when the engine warms. Check that it works (and hasn’t been jammed open). Interior trim is vinyl or cloth and new seat covers are readily available. There’s extra space behind the rear seat, which folds down to accommodate large items. Semi-trailing arm rear suspension was ahead of its time in ’55 and easily copes with more power. Four-wheel alignment and camber adjustment is worthwhile.The gearchange was highly rated when New and should still feel smooth, with synchro on the upper three ratios. It is robust and can handle uprated engines. Kingpin bushes (and steering links on early cars) should be greased every 1000miles and will wear rapidly if not. A worn steering box is expensive to fix.

10 Rear wings, especially around the wheelarches