Lamborghini, Maserati and Porsche all had compact 2+2s with engines of 2.5-3 litres – so it was clearly time that Ferrari stepped into the same market and the GT4’s sales figures confirm that it was a wise move. The boot is a useful size and, with its longer wheelbase, the GT4 handles and rides better than the two-seater 308s.

Performance was significantly affected by the need to meet emissions legislation in different markets and some Federal versions – which also had to bear ugly 5mph impact bumpers – put out 50bhp less. Sales resistance in the US led Ferrari to abandon Dino as a separate marque, and to authorise the replacement of the Dino badges with the prancing horse. For a time, it was the only Ferrari homologated for sale in the US. Bertone’s packaging was really impressive and rear vision – indeed all-round visibility – is exceptional for a mid-engined car. The GT4 was superseded by Pininfarina’s Mondial, which was roomier in the back but was heavier and slower.

Normal running repairs are not unduly costly – if you buy a good example and look after it, you should be pleasantly surprised by the bills – but parts unique to the GT4 can be very expensive. As an example, the rear light plastic surrounds cost £700, plus bumpers and their rubber inserts are unobtainable. As a spokesman for Ferrari pointed out, though: “Classiche, can remake any part for any car that Ferrari has ever produced. We have all the drawings for every component. A client having a car restored by Ferrari Classiche can request items to be remanufactured if not available as new old stock.”

Originally two distributors were fitted, one for each bank. Each had two sets of points, one retarding ignition when idling, the other advancing it for normal running; a micro-switch in the throttle linkage controlled the two. It’s tricky to set up, and best replaced with electronics.

NART GT4 was built by Bill Schanbacher for ’1974 Le Mans. Chris Rea with his in Pirelli Ferrari Formula Classic series.

Original sodium-filled valves (which break) will almost certainly have been replaced by now; check, and budget £12-15,000 for an engine rebuild if it can’t be proven. Cambelt must be replaced every three years (circa £700). A detailed and complete service history is highly desirable, as is getting the motor checked by a reputable specialist.

Gearchange can be notchy when cold, but shouldn’t be obstructive. Fourth-gear synchro is usually first to fail. Clutch kit £294; full ’box overhaul £1250-3500. Electronic ignition packs fitted from July 1978 cured plug-fouling issues that cars were prone to in traffic; retro-fitting electronic ignition is perfectly feasible. All electrical gear should be checked, especially windows (slow), aircon and pop-up headlamps. NLA column stalks can only be rebuilt, for $700 (c£540). Fans on front radiator (£1194 exch) are troublesome; this car has 13in Kenlowes with direct supply via relay. Foam on bonnet ensures all air flows throughrad. Ride is generally good but Teflon-lined suspension bushes do need replacement from time to time. Dampers seize up on little-used cars. Check dates on tyres. Trim could be full leather, hide and cloth, or vinyl and cloth. Rear seats could be replaced by a luggage carrier. Check that all fittings are present: parts are scarce.

3 Alloys, especially the original magnesium ones

4 Front wings, in particular behind the wheels

5 Scuttle panel at base of ’screen (glass out to repair)

10 Reflectors inside the rear light units

Despite it being a 2+2, the GT4 weighs just 60kg more than the GTB – so it’s almost as quick and most people agree that it’s more satisfying to drive. Period tests cited sudden breakaway on the limit in the wet, but it was a very high limit. 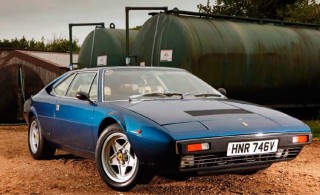 The engine is remarkably flexible given its high power output. Drive to the transmission is by step-down gears, so their noise is a constant accompaniment, plus a roar from the V8 when extended. Well-maintained engines are reliable, plus accessibility for most servicing is good, with one of the easiest oil filters to change on any car.

The crankcase is divided into two parts, one side being the sump for the engine, the other housing the gearbox and limited-slip diff. Oil seals between the two go hard with age and start to leak, allowing engine oil to fill up the gearbox. It’s not disastrous, but the bill to replace the seals is significant because it involves 10 hours’ labour.

Lack of, or intermittent, use is the biggest cause of problems, especially the brakes where the calipers and the marginal handbrake set-up can seize. Michelin XWX 205/70VR14 tyres are over £300 each, but many people convert to 16in Superformance wheels – as on the featured car.

Should your prancing horse go lame, Ferrari offers With You: free roadside assistance for any model built since 1947 not covered by factory or Power warranties. It gives 12 months of help if a vehicle breaks down, plus expenses to get home or reach the Authorised Service Centre to which the car has been taken. The service also covers hotel costs incurred by the owner before returning to base or continuing with their journey.

Ergonomics not great but cabin has a lovely bespoke feel. Crisp lines look their best in a subtle metallic – or yellow (see One to buy).

Newman bought his 308GT4 from a friend four years ago: “I’ve been a Ferrari fan for decades and belonged to the FOC’s Prancing Horse Register, helping out at track days. When I told my wife that I wanted to buy this car, she said, ‘I can’t believe you’ve waited for so long!’ It was built in October 1978 but first registered in the UK in August ’1979.

“The car had five owners in 10 years then had a major overhaul. It was retrimmed (it was tan) and the engine rebuilt. I’ve always liked the shape, it was affordable and I can get the seat further back than in a GTB. I’ve had to do some bodywork – I knew that it would need it – but mechanically it’s been excellent and just gets better with driving: it feels like a big go-kart. I’ll never sell it: I’ve taken it on track, and we had a great trip to Angoulême.”

Brakes ventilated discs all round, with servo: front/rear 10.5/10.9in

Bertone styling, midmounted V8, 2+2 – the Urraco was definitely in Ferrari’s sights with the GT4. Stunning, but it rots for Italy and parts can be a nightmare to find.

The fastest non-turbo 911 of its day outsold Ferrari and Lambo together, due to durability and targa option. Later SC (shown) better value and much more plentiful.

For repainted; everything works

Against handbrake poor (but that’s normal)

This really tidy car has been yellow from new. It was repainted a while back – a proper glass-out, doors off, back-to-the metal job – and presents well. The detailed history confirms its mileage, with bills back to 1983. The cambelts were done 2900 miles ago, in 2012, the clutch was replaced two years later and, at c500 miles between MoTs, it’s only being sold because it isn’t used enough.

There’s no rust, even in the doors, but there’s a tiny crease at the back edge of the driver’s one and a few chips. It has 2004 Goodyear GT2s at the rear and newer Yokos up front, all well-treaded.

Inside, there’s slight wear on the driver’s outer bolster but the velour inserts are hardly worn, just slightly discoloured, plus the door cards and headlining are almost mint. The dash is all good. The motor is nicely detailed, with no leaks, but we didn’t pop the header tank lid because it had been run. We also noted that the suspension rubbers aren’t perished, plus the exhaust and anti-roll bar drop links are in excellent shape.

It starts easily with no smoke and drives well, second coming into play after a mile or two. Bar some diff/bearing noise plus a slight harshness as you get away, it’s vice free, with strong brakes and, most impressively, the temperature refusing to budge from 80ºC when left idling, hot, for 10 mins. Oil pressure is just under 6bar, at 3000rpm and over, but drops to 3bar below 3000 when properly warm. It has almost a full year’s ticket.

Bare-metal Giallo Fly respray still looks smart; alloys, too. Nicely original, minor wear, and clock works (it was rebuilt). Super-clean engine has no leaks but the oil is a little dark.

After years as the bargainbasement Ferrari, the best examples of the practical 2+2 are now sought-after.

The 308GT4 still looks undervalued – despite a surge of interest over the past few years – but beware optimistic asking prices. Rot can be horrendous, so check carefully for filler and poor repairs, and expect a fat file of recent bills showing the care a Ferrari deserves. If not, budget to get it into good order. Experts reckon that there are not many nice ones.