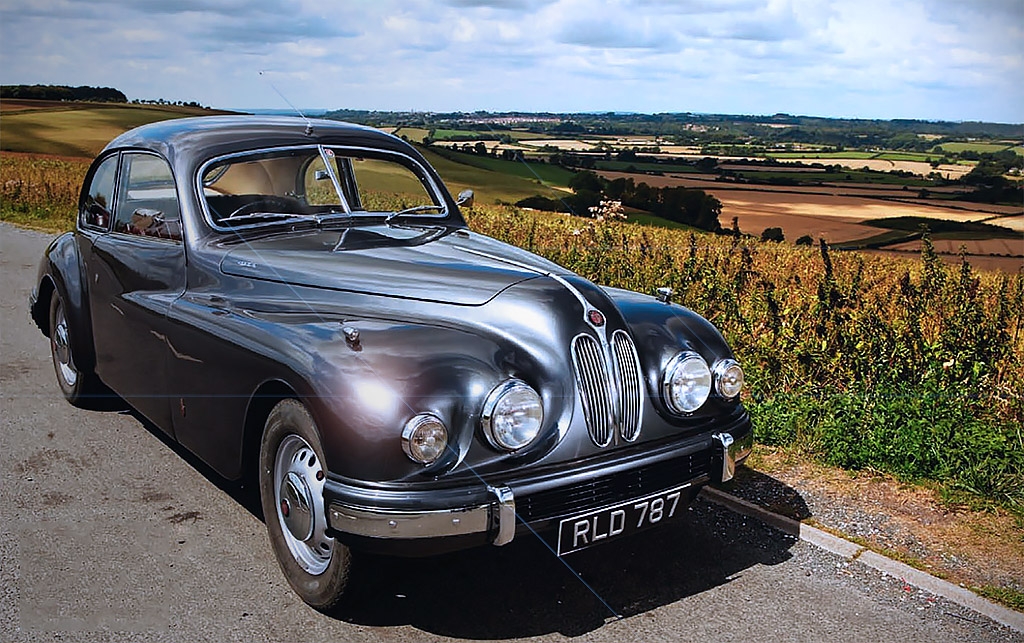 Bristol’s 401-3 was outrageously expensive for a 2-litre saloon in its day-only the likes of Bentley, Rolls-Royce and Lagonda cost more in 1949 – but it feels like a spacecraft in comparison to most of its contemporaries. A stiff chassis, effective suspension, smooth and powerful engine, plus a lightly built yet well-insulated body combine to make a car that feels taut, lively and sophisticated. Some would argue that Bristols only went downhill from here, losing their streamlined styling, gaining weight and retaining ‘advanced’ engineering until it became archaic. 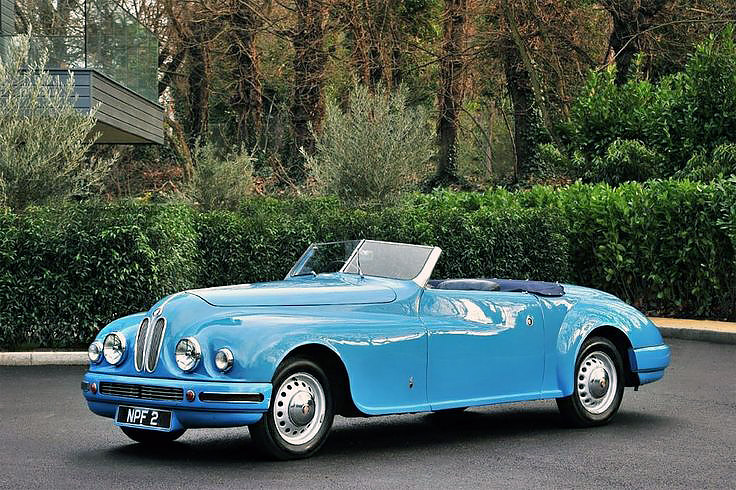 Bristol 401 with imposing backdrop of Brabazon at Filton factory.

The heart of the car’s success was its pre-war BMW-derived hemi-head straight-six, a superb unit, intelligently developed by Bristol, that was sought-after for sports and racing cars at the time. But Bristol made the most of it in the 401. The first 2-litre production saloon to hit 100mph, its all-aluminium body was exceptionally aerodynamic, helped by push-button door opening and internal bonnet/boot releases. Bristol adopted Carrozzeria Touring’s Superleggera construction long before Aston Martin. Even the gauge of aluminium varied: 16 for the tops of the front wings and the bonnet, where pressure might cause dents in a thinner gauge, and 18 elsewhere. Contoured, body-coloured bumpers with chrome inserts, mounted to the chassis via rubber blocks, were decades ahead of their time.

Other clever details include a bonnet that opens sideways (which is safer) in either direction, or can be removed by undoing a bolt, and a bootlid with a spring-assisted strut. Early 401s even had Tufnol floor and engine bulkhead, later replaced by steel. Where the alloy panel edges were wrapped around the steel tubes at the lower parts of the body, however, the sacking between gets wet and electrolytic corrosion can occur. Letting in new metal is the only cure. The paintwork is critical, too: check that it has been done properly, not blown over (which will flake off).

The rare drophead 402 attracted Hollywood stars, early examples going to Stewart Granger and Jean Simmons. In 1953 the 403 refined the idea, its engine boasting a stronger crank and larger valves, with greater oil capacity, to give 100bhp and power the car to 106mph. It boasted fresh-air or recirculated heating/ventilation, automatic reversing lights, multi-adjustable seats and an alloy petrol tank. Bristol phased out the 403 in 1955 after introducing the close- coupled 2+2 404 followed by the four-door 405.

The Autocar was hugely impressed by the 401’s comfortable 80mph cruising when tested in 1949, and by ‘handling qualities very much above the average’. Only the heavyish brakes (improved on 403) were criticised. Dunlop front discs (with servo) became optional on the 405 and are often retro-fitted on 401/3. A Coopercraft four-pot disc conversion is also available, but care must be taken to get the balance correct with rear brakes.

Having a good engine is critical: rebuilds are costly. Check which unit is in place, because upgrading to later, more powerful ones is not unusual; 40Is should have 85C engines and 403s 100As, but you may well find alternatives such as the 125bhp 100D2, the more torquey 2.2-litre 110-series or the 130-155bhp BS (Bristol Sports) motor. The engine should be driven gently until warm – check that the vendor does – and when oil is at 70°C, should show 60psi oil pressure at 3000rpm. Well cared for, these sixes ought to last 100,0 miles between rebuilds.

One-shot chassis lubrication (every 100 miles) needs checking to ensure that the pipes haven’t become blocked. Some oil dripping is to be expected, but confirm that it is not leaking from rear axle hub seals, which are a pain to replace.

Inspect the loom, because only two circuits are fused and it’s pricey to renew. Semaphore trafficators are often replaced with flashing indicators – the function built into the spodights and reversing lights to avoid adding extra lamps.

“I always liked Bristols since they were new,” recalls Davies, “and remember Setright writing about them. I’ve owned various classics and had a Scimitar when I bought this 403 in 2001, but soon found I wasn’t using the Reliant. It has the disc brakes and overdrive, and feels so modern for its time. The performance, handling and steering are not like driving a ’50s car: it keeps up with modern traffic and cruises at 70-80mph on the motorway. I’ve fitted Mahle pistons – the rings and grooves were worn in the old ones – and put fresh bearings in the gearbox plus a new clutch. I enjoy working on it. but had to get Bristol Cars to fit the new headlining! I’ve also reset the carbs; the jets used to work loose. We’ve driven it to France and Spain on holiday.”

Chassis 401/807 with engine 85C/1972 was restored by Brian May between 2005 and ’08 at a cost of more than £35,000. It didn’t appear to need any new metal once the paint was off, and is now nice and straight with excellent door fits and shiny fresh paint. Looking down the sides reveals a few gentle ripples although that’s normal. The chassis and sills are solid and there’s a recent part-stainless steel exhaust, plus a few oil drips from engine, transmission and rear axle.

Inside, the leather, carpets and headlining are all unworn, plus the dash timber and instruments are mint. The only tiny faults are an indicator lever that needs a grubscrew to secure it, and the driver s door lock handle is broken off.

The engine is smart and tidy, with cleanish oil and slightly brown coolant to the right level in the top tank. The original jack is still strapped to the bulkhead, and there’s a spin-on oil filter conversion, with fluid and level okay.

It starts easily and drives sweetly with strong synchros. The steering is properly fluid and the brakes nip up well. Oil pressure is 60psi, rising to 70psi with any revs, with temperature steady at 85°C. The indicators light if you twist the switch spindle, but they don’t flash (to be investigated).

The history file contains much correspondence over the restoration and an original green continuation logbook issued in die 70s. The last MoT test was carried out in 2012.

Who else but an aeroplane builder such as Bristol could manufacture a streamlined saloon that looks as good as a 401-3?

Engine is in fine order, with spin-on oil-filter conversion.

All the chrome is pristine; lots of tread on Austone radials.

Early Bristol saloon prices are rising fast as their exclusivity and quality are finally being recognised: buy a good one and you will not regret it. Beware down-at-heel cars – they were cheap for a long time and many owners couldn’t afford the high parts and repair costs. Neglect of the body and engine lead to severe restoration costs, so choose a project with caution.

•             Complex cross-pushrod engine is pricey to rebuild, and can disintegrate through age

Check for cracked block on right-hand side; it costs c£2500 to repair. Skimming the alloy cylinder head can drastically raise compression; listen for pinking and inspect for signs of overheating or head-gasket leaks. If the radiator is more than 10 years old, it should be recored and the engine coolant passages cleaned out.

Axle oil lubricates the torsion-bar link arm pivot bearing; if it wears, the oil leaks out. This, plus rear hub leaks, can wreck the axle if left to run dry.

Bristol-made gearbox is sturdy and can invariably be rebuilt. Adding a compact J-type overdrive is worthwhile; the kit requires no chassis modifications.

Steering and suspension wear if neglected: look for signs that one-shot lubrication works and has been used, and that springs have leather gaiters.

Drum brakes are okay on 403s (but fade on steep descents); 401’s are heavy. Front discs and a servo can be fitted. Repro master cylinders vary in quality.

Leather-upholstered seats are comfy and front backrests can be set to four angles. A full retrim costs £12k and the thickness of factory hide is unavailable.

Instruments can generally be rebuilt if complete; second-hand ones can be found. Check wood all matches and is good; replacement is relatively easy.

3 Corrosion along the sills and over wheelarches.