The RS Cosworth gave the Sierra range proper ‘street cred’. Ford Motorsport under Stuart Turner needed a Group A saloon to replace the Capri. Conveniently, Cosworth had developed a 16-valve twin-cam version of the Pinto engine that, once turbocharged, would create a stonking Touring Car in the light three-door fleet Sierra bodyshell. Aerodynamic work yielded effective spoilers; a nose intake fed air to the intercooler. Four-wheel disc brakes with ABS and 7x15in alloys were specified, but the RS tag was used only in the UK.

Initial sales network reaction was poor, so Ford massaged the price and spec, restricting the model to one trim colour and three external: Diamond White, Black or Moonstone Blue.

Having built enough cars to homologate for Motorsport by the end of ’86, including 500 shells set aside to be the evolution RS500, Ford’s next Cosworth would be a more civilised road car, not a competition special. The new fourdoor Sapphire saloon shell proved no heavier than the old three-door, but more aerodynamic.

The RS500, modified from standard threedoor Cosworths by Aston Martin Tickford, was the most successful on track and is now the most desirable, but was barely any quicker as a road car. All were right-hand drive, intended for the UK, and almost all were black. The engine featured a stiffer block, larger turbo and intercooler, twinrail injection and modified inlets.

Road power only went up from 204 to 224bhp, but race trim soared from 350 to 550bhp. Spoilers increased downforce and the rear suspension allowed more adjustability. Copies are common: Ford sold a vast range of development parts and it was possible to uprate to RS500 spec. Ford Motorsport part numbers begin with code 909. RS500 chassis numbers on the slam panel and beside the driver’s seat are WFOEXXGBBEGG 38600-39099; engine numbers (remove cambelt cover to see) are YBD 0015-0537.

Finally, in 1987, the new MT75 transmission was strong enough to mate the Cosworth engine to the 4×4 chassis. Ford wasted no time in developing the Cosworth 4×4, with a stronger block, revised head and manifolds, plus a slightly larger turbo than on the Sapphire, giving peak power of 220bhp to cope with the extra friction and 210lb penalty of the four-wheel drive. Originality, meticulous servicing and lack of rot are the key areas when buying any Cosworth Sierra.

Meticulous servicing is vital. Upgrades are common but cause problems: standard engines must stay below 330bhp. The cambelt should be changed every 30,000 miles or five years. Listen for piston slap when starting from cold, and have a compression test done. Misfires can be minor, but indicate serious issues. A rebuild costs £3-5000.

Ford’s strongest 7 ½ in diff was used, but isn’t indestructible; listen for noises. Discs warp with heavy use. Dampers don’t last that long; yellow Konis should be black.

Internal corrosion leading to head gasket failure is common: look for coolant leaks on exhaust side and signs of overheating. Confirm that fans work at full capacity.

Borg Warner T5 transmission is strong, albeit notchy when cold. Check for worn synchro on second and third; baulking on all gears might be a failing clutch cable. 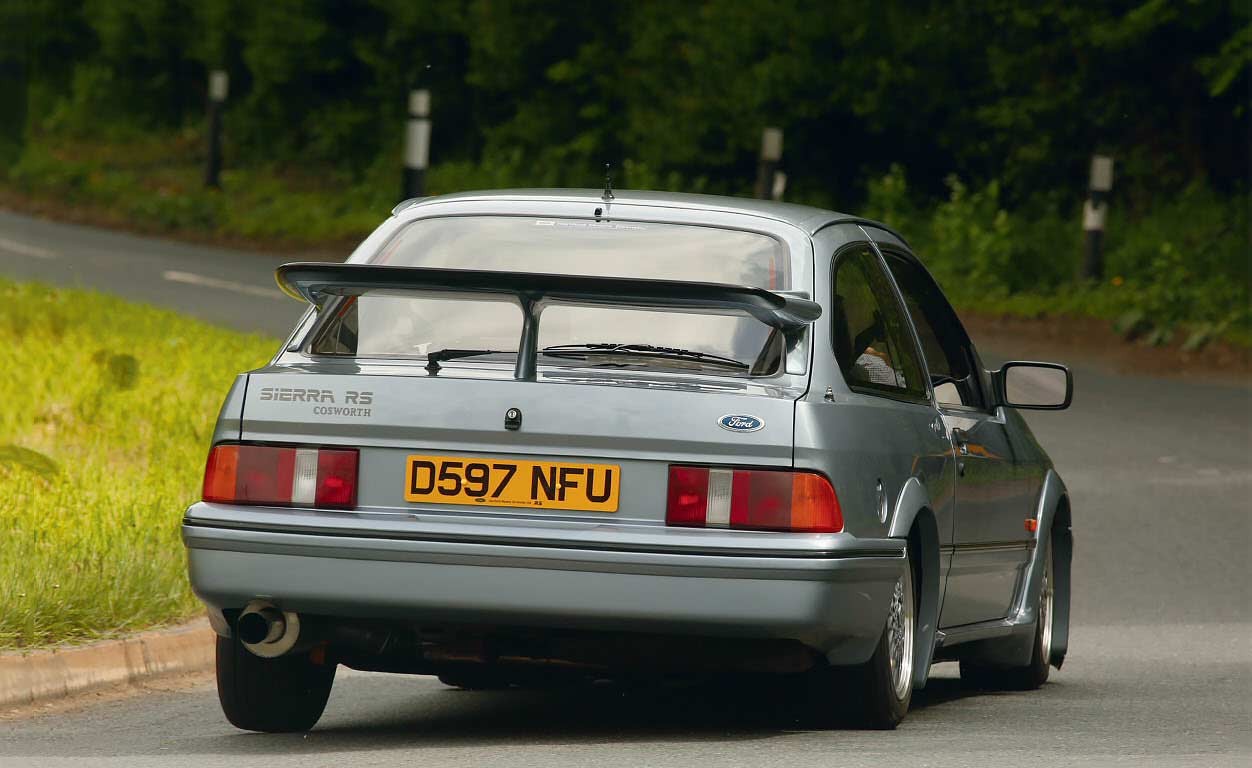 RS Cosworth is in its element on switchback country roads, where its fun handling should be firm and wallow-free. 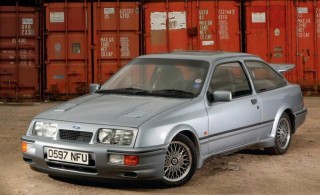 Our feature car is one of the most original examples around, yet even it has had the Stage 1 tune – a simple remap that’s said to be better for the engine, which otherwise is a little strangled in standard form. A Cosworth should be reliable, dependable transport, although minor electrical issues can have a massive impact.

Poor supply to the fuel pump can make the engine run lean and melt pistons: a separate fused supply is vital. Check the fuel pressure regulator at the front of the fuel rail, especially its pipework and hose-clips: leaks, again, have disastrous results. Over-fuelling is equally dangerous, commonly caused by sub-standard ‘uprating’ chips: it dilutes the oil causing rapid engine wear. It cannot be over-stressed how important is thorough maintenance by someone who really knows Cossies: be wary of buying a car that has no evidence of such care.

The cooling fans also need their own electrical supply. Engine bay wiring degrades with heat and age, sending intermittent signals to the ECU: again engine failure can result. Old and poorly installed alarms give many problems.

Misfires are common; the rotor arm, dizzy cap, leads and plugs must be 100% (or uprated to a wasted-spark system). Crank and cam sensor settings are also critical. Always compression test a misfiring engine before buying, in case a holed piston or similar is to blame.

All Cosworths should feel taut and lively, with not too much lag and no wallowing or creaking – anything less needs attention. Check for blue exhaust smoke (valve seals) or white (turbo wear).

“I was 20 when it came out, ”remembers Corner. “I was walking through Hereford when a stunning White RS Cosworth drove past and I wanted one immediately. I love the massive wing on the back, the big gaping hole at the front and the whole attitude of the car. My friend Sean Puckle bought this one from its first owner, a Grimsby businessman who felt so strongly about it that he interviewed Sean before agreeing to sell it to him. Sean won lots of awards with it and said he’d never sell, but one day he weakened and I jumped in quick before he changed his mind. I’ve had the Cosworth four years now and love driving it. It was my first turbo car and I find the lag quite fun; you can feel it coming in and then it really takes off. And it’s better put together than an Integrale.”

Against Paint is a bit thick in places

This Sapphire 4×4 has clearly been extensively renovated, with the result being a nice, stock-looking car. It’s been painted, thickly in places – notably the inner wing channels/bonnet shuts – but the structure seems solid with no rot. The sill trims are a bit wavy on their undersides but that’s normal. It sits on 11-year-old Uniroyals with an unused Nexen on the spare, which lives in a perfect well. The fuel tank looks new, too.

Of most interest is how much money the previous owner spent with Graham Goode, the first £6000-plus in 2009 for lots of replacement parts, followed by another £9k on an engine and ’box rebuild, plus calipers. It suggests that he was starting with a tatty but solid car that he was determined to bring up to scratch. The only non-standard parts are vernier cam-wheels and a Mongoose exhaust, plus various Polybushes.

Inside, the carpets are unworn, plus the headlining is excellent – as is the dash, housing the original Ford-branded stereo/cassette. All four electric windows work, as does the wind-your-own sunroof, the drain holes of which are clear. The YB motor starts instantly with no smoke, just a hint of cam followers that soon settle. It behaves well, with a firm chassis and a nice brake pedal. Temperature, in typical Ford fashion, sits a third of the way up the gauge. Fourth in the MTX75 ’box is a little less than intuitive to find, but this is normal. The MoT runs until 30 May.

Brilliant makeover, with bodykit and massive rear spoiler, turned the humble Sierra into a racing pin-up

A good, unspoilt Cosworth is hugely rewarding to own; a botched, abused one is a nightmare. So buy carefully, especially if you’re determined To own a hatchback. Prices are already sky-high for three-doors and well-preserved Sapphires are taking off, too. They are just as fast and arguably more usable, but will never be worth as much, so beware excessive prices.

• Most original Cosworths have been modified

• Many have been stolen and/or crashed, so a thorough inspection/history check is vital

1986 Series production gets under way at Genk, Belgium; 5000 built by December

With a 16v Cosworth head, the 190 was only slightly slower than its rivals despite its heavy shell. A full history is vital and look out for rot, which can be extensive.