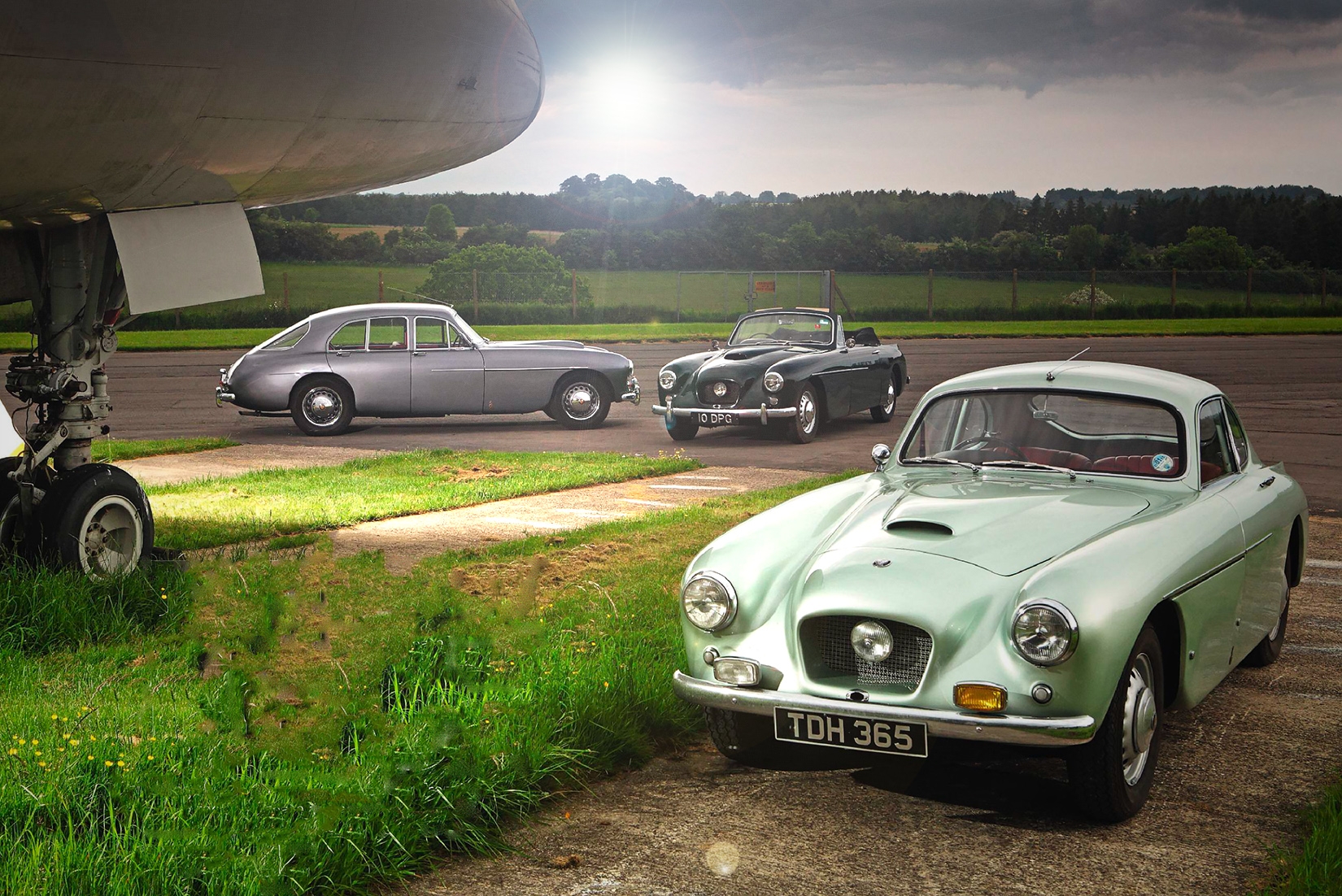 The new face of Filton. During the 1950s, Bristol moved away from its styling roots to create a completely fresh look. Martin Port drives the 404 and 405. Whether you refer to it as a hole, a duct or a Pitot air-intake, this feature took pride of place on the front cover of the Bristol 404 Sports coupe brochure. While the firm’s evolved engineering still contained elements of Longhridge thinking and Eisenach practice, the 404 and 405 of 1953 and 1954 represented Filton design maturing – under Dudley Hobbs – free from the influence of Autenreith and Touring. These are regarded as the most Bristol of Bristols, the ultimate aircraft-inspired models before the company became independent from its parent, Bristol Siddeley Engines Ltd.

The ‘bratwurst’ grilles of earlier designs were replaced by a clean, purposeful aperture – said to have been modelled on one of the lozenge-shaped air intakes from the mighty Type 167 Brabazon. Hobbs, a former wing designer at the Bristol Aeroplane Company, may have been inspired by the idea, but the very different requirements of a 3270cu in, 2500hp. 18-cylinder Centaurus 20 radial and a roadgoing 1971 cc 105bhp, Type 100B straight-six would demand an equally different shape. 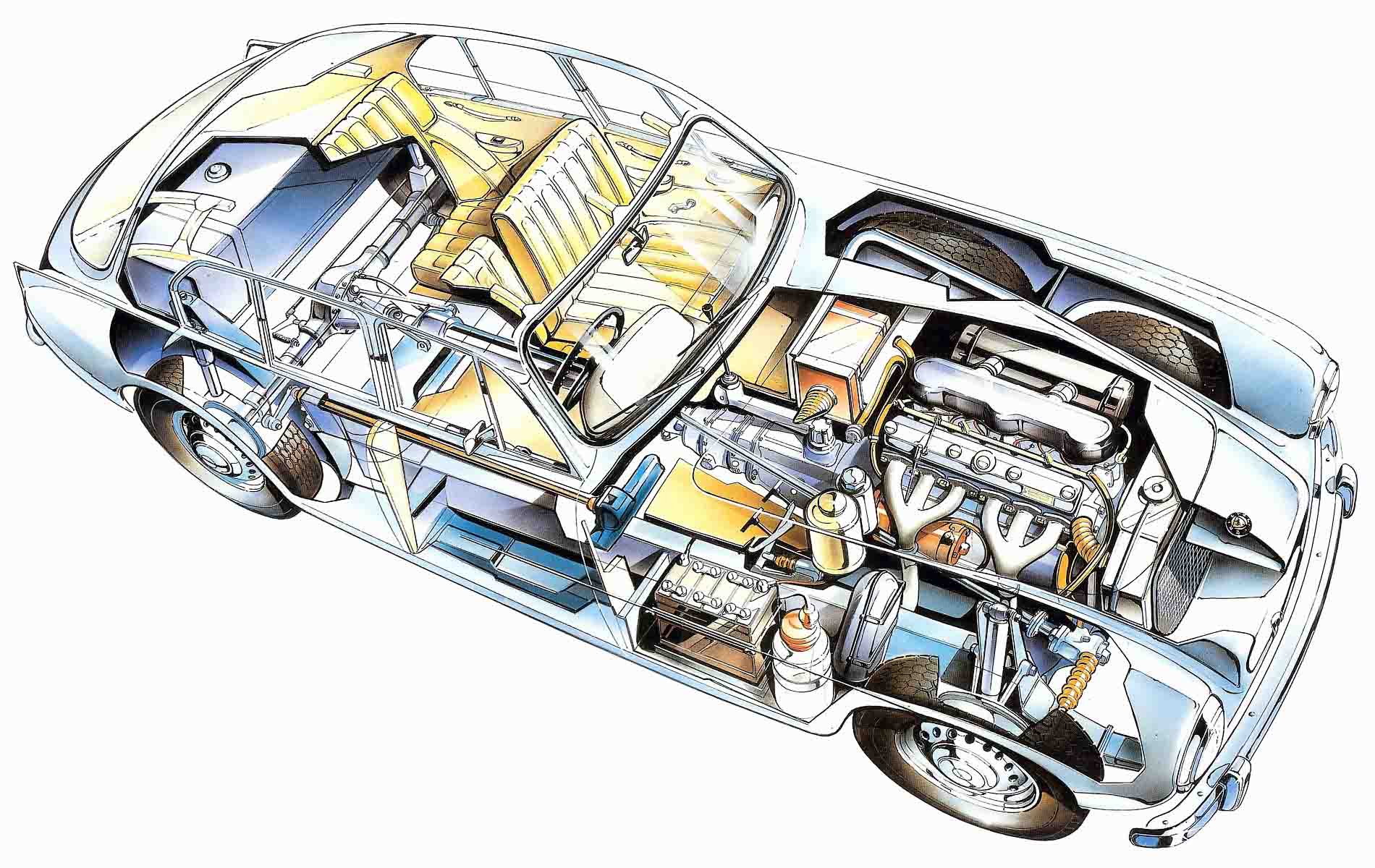 The company’s approach to production changed with the Bristol car. Both the 404 and 405 contained more outsourced components than the 400, a model that was pure Filton aside from electrics, clutch, propshaft and tyres. What didn’t alter was the amount of innovation and forethought that went into these new models. A 405 owner could expect a padded dash-top and knee-roll (the former non-reflective), a laminated windscreen, door pockets, ergonomically placed instruments with anti-glare dial bezels, self-parking two-speed wipers, self-cancelling indicators, an overdrive that automatically disengaged out of top and radial tyres. Paradoxically, the structure of these models could be regarded as retrograde, for they rejected all-metal Superleggera construction and reverted to a partial wooden body frame. 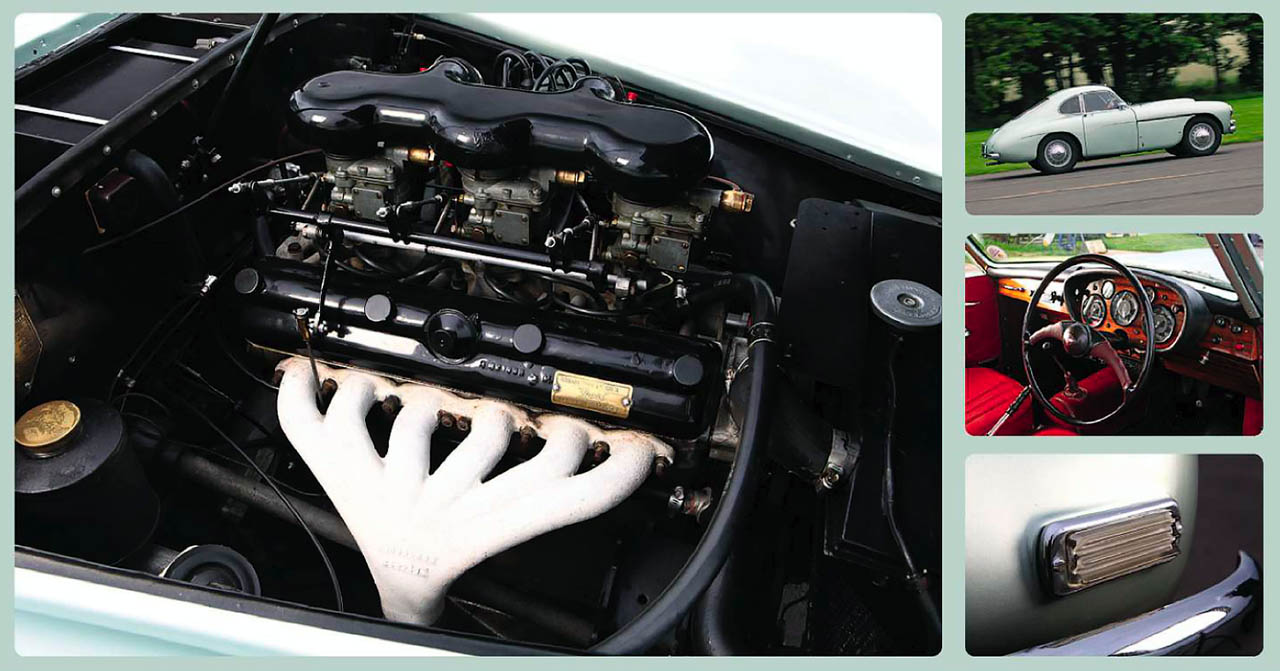 The origins of the move from a single model to two (three, actually, because the 403 remained in production until 1955, when the Car Division became Bristol Cars Ltd) lay in a plan drawn up by George White in 1946. This timetable envisaged Bristol building a larger-engined family car and a short run of a premium-priced specialist model. The larger engine – at that point the prototype 160 was a twin-overhead- cam 3-litre – would never see production, but the specialist model that would become the 404 was based on a 1951 idea by Jack Channer to shorten the A-frame chassis by 1 Bin. Initially declined by the board, the plan would be revived in 1953 with the building of a three-finned prototype christened ‘The Bomb’.

The bodywork was designed by Hobbs and Jim Lane, with the first 404 prototype featuring prominent tailfins plus a third stabilising fin that separated two rear port-holes. This evolved into smaller tailfins with the third becoming removable, before being discounted for production. 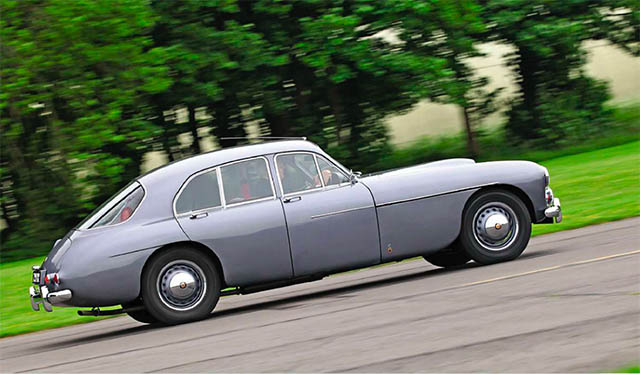 Above: the 404’s front end carries echoes of the Brabazon’s air intakes. Right famous 1971cc‘six’ topped by triple Solex carbs is shared by all three models; the tailfins were toned down for production car; five-dial binnacle for 404; ribbed rear light

In the balance of price versus cubic capacity, the 404 always suffered in relation to its competitors. Even with a seldom-specified Type 100C engine – in which a hot cam increased power to 125bhp at 5500rpm -its price of £3542 15s 10d looked steep compared to a 2580cc, 125bhp Aston Martin DB2/4 at ‘just’ £2621 19s 2d. And that was despite the probability that, in the event of a cross-country duel, the Bristol would leave the Aston owner with either a bill for an engine rebuild or biceps of jelly.

The 404 and 405 – a production evolution of the four-door ‘Black Widow’ concept – were identical ahead of the A-pillar, but the latter had a deeper windscreen. Luggage capacity and high-speed handling issues encountered with previous models were addressed with the adoption of front-wing lockers for the battery and spare wheel – improving weight distribution — while the 405’s dashboard featured the debut of the seven-clock binnacle that would endure until Bristol ceased production in 2011.

Thanks to a radiator that was mounted with a forward tilt-making the main intake shallower – and a separate air duct for the carburettors, the 405’s frontal area was 2sq ft smaller than that of the 403. Overall, however, the 405’s aerodynamics performed similarly to its predecessor due to the company’s adoption of more conventional separate bumpers, quarterlights and non-flush doorhandles. The 405’s greater stability from its retention of the 9ft 6in wheelbase chassis also reduced the importance of its fins from aerodynamic aid to aesthetic flourish.

The 405 drophead coupe, another low-run model, shared the saloon’s chassis but not its four-door configuration. It was converted by F.D Abbott Ltd in Wrecelesham, the company that had produced a unique convertible 404 in 1953. Chassis for the 405 were driven from Filton to Surrey by the half-dozen, with only the panel- work ahead of the A-post/scuttle in situ. A pair of rear saloon wings came with each chassis – for modification — while the rear frame and longer door frames were constructed from wood.

Geoffrey Herdman’s 1956 405 drophead – bought in 1999 – perpetuates the marque’s reputation for longevity and reliability. After 150,000 miles, its original engine was replaced in 1966 – this 100R was then rebuilt at the turn of the millennium. After 13 years of globe-trotting, including a 2010-’11 around-the-world trip, the drophead has done a further 175,000 miles and is still Herdman’s daily car.

The second low-volume machine is Bryn Williams’ beautiful 1955 404. He bought it last year, the car having previously been owned by marque expert Spencer Lane-Jones, and 404 ownership was a long-held goal for Williams. He first fell for it at medical school, before being distracted by the charms of the Lotus Elite.

Finally, we go mainstream with Cyril Mill-ward’s 1956 405 saloon — one of the first to be fitted with disc brakes. It’s a stunning blend of Moroccan Red interior and Rolls-Royce Oyster Grey exterior, and engineer Millward has sympathetically improved his 405 to cope with today’s roads. Eyes wide and palms tingling, it’s time for the enjoyable bit.

‘DRIVING THE BRACE OF LOW-RUN MODELS IS A PRIVILEGE, BUT THERE IS SOMETHING ABOUT THE 405’

Courtesy of its longer doors, the 405 drophead is the easiest to board, for unlike the other pair it docs not require strange posturing and shoulder-swivelling worthy of a Madness dance routine. Inside these cars, your hands cradle a slender Bluemels wheel, your buttocks are cushioned by Dunlopillo seats and your eyes are greeted by a cowled Pitot-inspired binnacle. The driving position is comfortable and the pedals well spaced – the biggest difference being a question of headrooiu: inches versus miles.

It isn’t a matter of comparing musicality, more a case of contrasting venues. The drophead is like a main-stage act at a large outdoor music festival; the 404, a gig in a packed pub; and the 405 brings to mind a chap savouring an album on his Linn Sondek LP12 turntable. 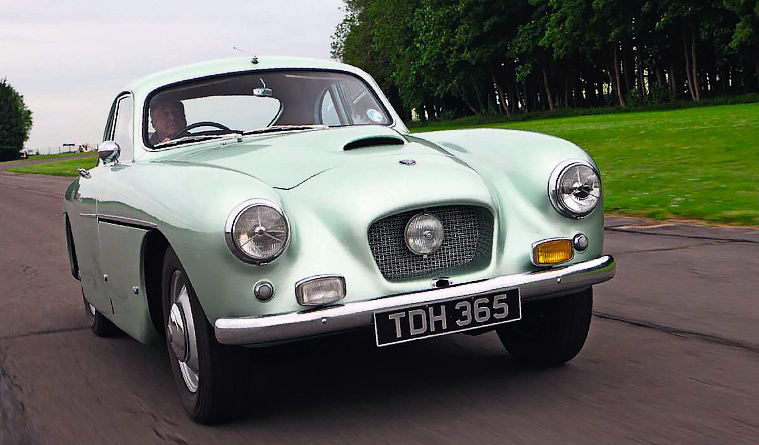 Both remote BW/CR/5 and BW/CR/9 gearboxes are faultless and operated with relish. Swift, precise and with a gorgeous lubricated mechanical tactility, this even extends to the action of the slender self-cancelling toggle switch for the 405’s overdrive.

Nuanced differences between our trio loom into view’ with the brakes – servo-assisted discs versus surprisingly effective Alfin drums requiring more muscle. Discrepancies, though, present themselves in the roadholding department. Each has a connected ride, enthusiastic handling and sublimely geared informative steering- but it is the short wheelbase of the 404 that comes across as the most frenetic, with quicker responses, greater agility and the firmest ride, doubtless emphasised by the rearaxle being in close proximity to your derriere. Radial-ply tyres have certainly helped curtail its reputation for skittishness, but it can still be experienced on a fast road with a crosswind.

At sensible speeds, the difference between the ‘Businessman’s Express’ and ‘Flying Greenhouse’ is drastically reduced. Millward’s 405 is equipped with modern adjustable dampers, meaning that, despite its extra length, understeer doesn’t gatecrash the party when swooping through flowing bends. All three cars turn in crisply with little evidence of roll, complete obedience and a slight sniff of extra heft building up through the outstanding steering. Yes, in the drophead you feel an occasional shiver through the steering wheel, but there is more of an inclination to relax, take in the view and enjoy your ride with Mother Nature.

Picking one couldn’t be easier or harder, for each has its plentiful merits with precious few weaknesses. Driving the brace of low-run models is always a privilege, which never ceases to emblazon a broad grin across my face, but there is just something about the 405 – Filton’s one and only four-door.

Whereas the drophead and 404 arguably have a broader appeal due to their understated class, style, quality and undeniable beauty, the 405 – reputedly one of Dudley Hobbs’ favourite designs – is more of a personal predilection. It is arguably a pioneer of the post-war four-door coupe in all but name, a car that almost- but not quite – ventures into the realm of the unconventionally attractive belle laide.

On 23 December 1942, the Brabazon Committee was established to envisage the future of British civil aviation during a time when the UK’s aiiciaft capacity was dominated by the war. The committee drew up a series of proposals, with the Type I (for a long-range transatlantic airliner) and Type III (medium-range Empire transport airliner) being awarded to the Bristol Aircraft Company. The Type I contract was fulfilled by the Brabazon, while the Type III resulted in the creation of the Britannia which first flew in 1952.

The aircraft was plagued by wranglings with BOAC, development niggles and two aircraft being lost. One problem was that the company’s first turbo-prop engine, the Proteus, initially suffered from icing problems due to its reverse- flow design. The delays brought Bristol so close to the brink that the management re-organised the company into separate Aircraft, Engine and Car Divisions. Sadly, the Pnoteus 625 suffered from reliability issues, and by the time they were replaced by the 765, the turbo-prop looked like yesterday’s technology in the jet age. Elements of the Brabazon/Britannia control systems, however, would live on in Concorde and the Britannia was the first aincraft to fly transatlantic passengers non-stop in both directions.

In 1956, the industry was rocked by expensive new mandatory pressurisation and dynamic stress-testing in the aftermath of the Comet crashes. In an instant, all work on future developments – notably the Type 220 car and Type 160 3.65-litre engine – ceased at Filton.

Of the 85 Britannias produced, XM495 (above) is the only complete former RAF example to survive. Built by Short Brothers, it was the penultimate (of 23) Type 175s to enter military transpont service. When it returned to RAF Kemble on 14 October 1997, it was the last Britannia to fly and has since been maintained by the volunteers of the Bristol Britannia XM496 Preservation Society. It is open to the public at Cotswold Airport, Kemble, from 12-4pmon the first and third Sundays of each month.