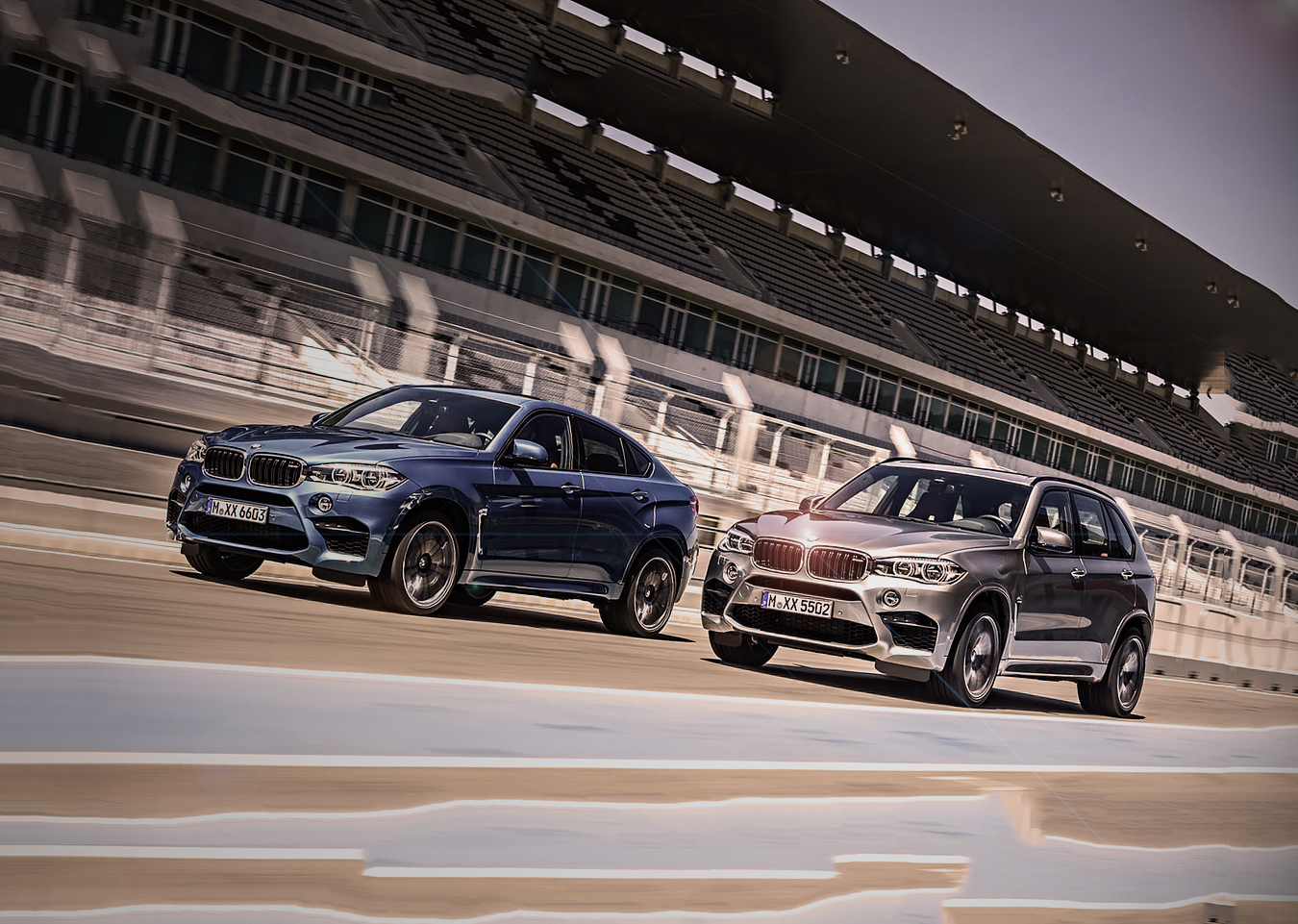 Hot BMW X5 F15 and X6 M F16 models due in 2015. BMW’s latest hot 4×4 M models have been revealed in all their glory as the X5 M and X6 M make their worldwide debut at the Los Angeles Auto Show. Naturally enough they’re based on the F15 (X5) and F16 (X6) and BMW claims they bring big improvements over the outgoing E70 and E71 examples. Power is up by four per cent, torque and performance are all said to be boosted by 10 per cent, while economy and emissions have both been improved by over 20 per cent. Impressive stuff.

At the heart of these beats a twin-turbo 4.4-litre V8 that BMW refers to being ‘new’, but given it shares its capacity and bore and stroke with both the old X Ms E70/E71 and the F10 M5 we reckon it’s probably closer to the truth to call it a ‘revised’ unit.

We probably shouldn’t get too hung up on the semantics— though as it does boast some impressive numbers; like 575hp at 6000-6500rpm and 553lb ft (750Nm) of torque available from 2200 to 5000rpm. That both machines will be quick is a given but a 0-62mph time of 4.2 seconds is impressive for something that weighs two-and-aquarter tonnes and their standing kilometre time of 22.6 seconds is only half a second shy of what the M4 Coupé can manage. Top speed is electronically limited to 155mph (250km/h), although in some markets this can be boosted to 174mph (280km/h) with the addition of the M driver’s pack as an option. On the EU test cycle the claimed economy and emissions figures are 25.4mpg and 258g/km, although in the real world we’d probably expect those figures would be a struggle to reach. 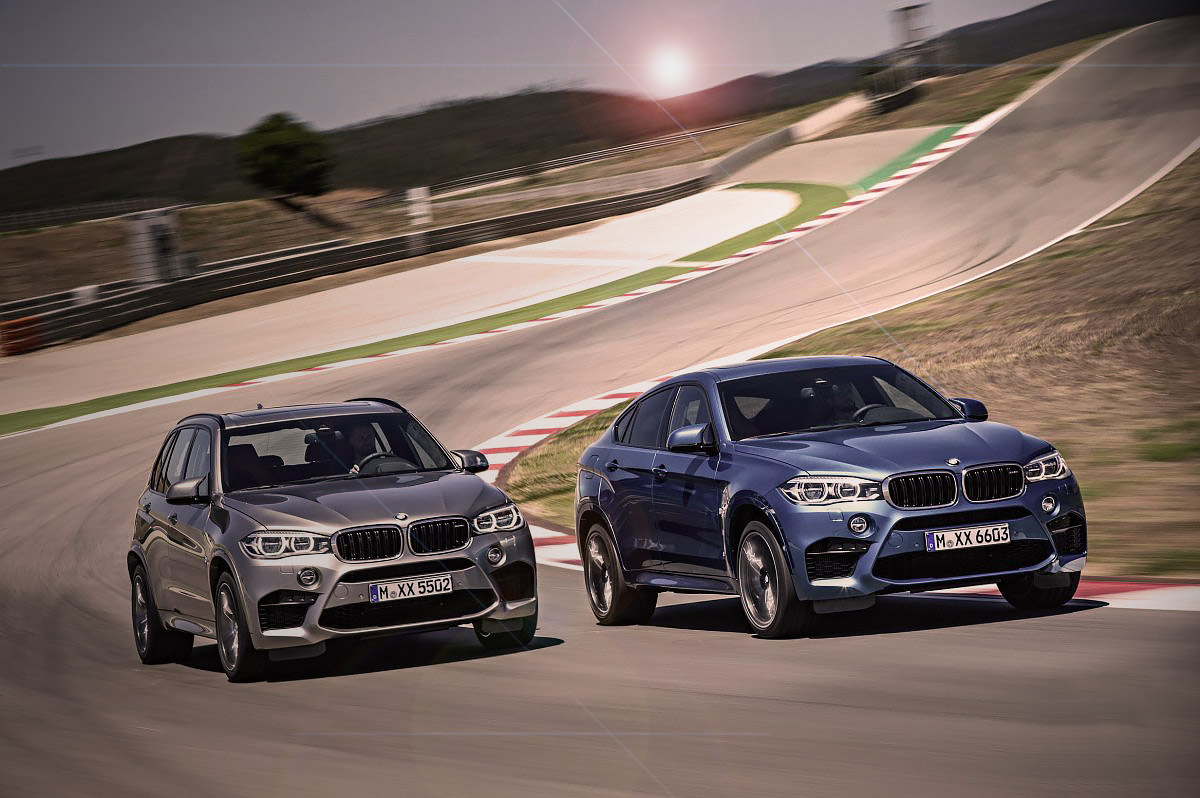 As we’ve seen over the last few months the X5 and X6 Ms have been put through their paces on the Nordschleife – if they can make it there, they can make it more or less anywhere. The extreme lateral and longitudinal acceleration put upon cars when lapping the Nürburgring places high demands on an engine’s oil supply, but sophisticated sump and suction snorkel geometry ensures that the X5 M 2015 and X6 M 2015 can generate up to 1.2 g without problems. Meanwhile, a combination of low- and high-temperature radiators ensures optimum cooling for the engine coolant, charge air and engine and transmission oil. Electronically controlled flaps within the exhaust system help provide a sporty soundtrack.

In the old models, power was transmitted via a six-speed auto ‘box but these new generation of X Ms utilise the ZF eight-speed unit with M Steptronic and Drivelogic. BMW reckons this delivers all the advantages in terms of responsiveness of the M double clutch gearbox in other M models, with the smoothness of a torque converter automatic. It also allows for a wider spread of gear ratios to foster greater fuel efficiency, and for the first time in a torque converter automatic it permits ‘creep on demand’ through the Low Speed Assistant system. The Drivelogic function allows the driver to prioritise fuel economy, comfort or sports performance, while gear changing can be automatic or driver-controlled via paddles on the steering wheel. A Launch Control function is fitted to permit perfect standing starts.

The xDrive four-wheel drive system is fully flexible in the way it distributes torque to each axle, to ensure maximum traction on all roads and in all weathers. Normally the bias is towards the rear to give the X5 M and X6 M maximum agility, but when the occasion demands, 100 per cent of engine torque can be sent to either axle.

Naturally enough the cars’ chassis have been given extensive revisions to ensure they can cope with the extra power and torque and to give the sort of agility that M customers demand. They now deliver improved cornering force through revisions to the upper front wishbones, which have increased camber, camber progression and steering pivot axis, while directional stability has been increased thanks to revised elasto-kinematics with more rigid bearings. The X5 M and X6 M feature firmer suspension tuning than other X5 and X6 models, a 10mm lower ride height, Dynamic Drive active roll stabilisation and self levelling air suspension at the rear. Dynamic Performance Control with Comfort, Sport and Sport+ modes allows the driver to personalise the suspension settings at the touch of a button.

Steering is via an electronically assisted rack and pinion setup with M Servotronic and M specific gearing and tuning and stopping power is provided by six-piston front callipers and pads that have a 50 per cent greater surface area than on the old models.

Inside, the X Ms have been significantly upgraded from their regular production counterparts and feature a host of standard equipment. There are M front sports seats – electric, heated and with driver’s memory – trimmed in fine grade Merino leather with contrast stitching, an M leather steering wheel with shift paddles, a leather-clad instrument panel and an Individual anthracite roof lining. Both models also feature Adaptive M suspension, DAB radio, M-specific Head-up display and the full Professional Multimedia Navigation system. Both models go on sale in the UK in April 2015 with onthe- road prices of £90,170 for the X5 M and £93,070 for the X6 M.