Overall, though, the M10 is a very good engine, but it demands regular maintenance

WHAT CARS, WHICH M10 ENGINE?

You could say that there are two BMW companies, the original firm that made the 328 and ended with the last V8 cars such as the Baroque Angel and 3200CS, and the ‘new’ BMW that began under the Quandt family and the New Class 1500 in 1961. You’d probably be right because the 1500 marked a complete change of direction for BMW, going from hand-built, expensive monsters that didn’t sell very well – and dead-ends like the 700 and Isetta – to a new class of car that led to BMW being where they are today.

The 1500 was announced in 1961, went on sale in 1962 and became Germany’s Alfa Romeo; a compact, four-door with excellent handling and performance, as well as very good build quality.

At the heart of the Neue Klasse was an all-new engine, a neat OHC, four-cylinder unit designed by Alex Von Falkenhausen, a BMW veteran who’d been with BMW since before World War 2.

In 1961, engine technology was like this; British firms were turning out all-iron OHV units, such as the BMC B Series, with a 1,500cc unit developing 50-60hp.

Rootes and Ford also made similar engines with similar power outputs. A 1600 MGA with twin SU carburettors, developed a claimed 79hp, although the British motor industry wasn’t averse to bumping-up power figures in those days! For example, an MG Magnette saloon struggled to 60mph, taking nearly 20 seconds, while the BMW 1500 with a DIN-certified 80hp, did the same thing in 15 seconds – go figure!

The 1500 engine – coded M10 – was an all-new design taking nothing from previous BMW motors. An iron block provided the base, with 82mm bores, and the crankshaft was a forged-steel job with five main bearings and a stroke of 71mm, giving a capacity of 1,499cc.

The cylinder head was an alloy crossflow casting, with big ports and valves, hemi combustion chambers, inclined valves and one camshaft operating all eight valves via rockers on two rocker shafts – one for exhaust and one for inlet. The cam was driven by a Duplex chain with a simple rail one side, and a tensioner blade on the other, with a plunger that was both spring-loaded and oil pressure-driven.

On very early models (until around late 1963, unless you know different), BMW used a spring-loaded idler gear, but this was replaced by the curved slipper rail we all know and love. I’ve no idea why this happened – perhaps due to cost or even reliability issues, but you’ll be very lucky to find one now.

The oil pump was bolted to the front of the block and driven by a short chain from the crank sprocket. It sat in the front sump bulge and delivered filtered oil in the normal way to the camshaft lobes via a steel spray bar – a tube with holes in it that sprays oil between two lobes and gets enough on both of them.

The distributor sat at the back of the head, and was driven from a cam gear. Carburation on the 1500 was provided by a single-choke Solex 34PCIB, and the power output was that previously-quoted 80hp at 5,700rpm, accompanied by 118Nm of torque at 3,000rpm on an 8.8:1 compression.

February 1962 saw the 1500 enter production, and the next logical step was a bigger-engined version, the 1800. It’s not known if that chain tensioner gear made it this far, but the 1800 began production in September 1963.

An 11-second 0-60 time was right up there with the Lotus Cortina and Mini Cooper S, and a special SA (Sonder Ausfuehrung or special version) 1800 TiSA arrived in 1964, to homologate a few trick bits for racing. Thanks to the addition of 45 DCOE Weber carburettors, a longer duration cam and a high 10.5:1 compression ratio, this unit delivered 128hp at 6,100rpm together with a very peaky 157Nm at over 5,100rpm. The special model’s maximum speed was recorded at 116mph, and the car could sprint to 60mph in nine seconds – serious ‘go’ for 1964.

In 1969, a 2000Tii was launched with Kugelfischer mechanical fuel injection, which gave the 2000 great performance as you’d expect, with 130hp and 176Nm of torque and a sensibly-high 9.5:1 compression ratio.

The 121 cylinder head was introduced with the 2000 engine, and filtered its way on to the other M10 units thereafter. The M10 then continued in this form until autumn 1972, by which time the New Class was about to be replaced by the E12 520 and 520i. This first 5 Series used the M10 2-litre engine, but with changes.

Running a single-choke Solex 32/32 DIDTA carb and a low, 8.3:1 compression ratio, that 89hp was achieved at 5,800rpm together with a fair, 140Nm of torque at 3,700rpm. But BMW soon revised this simply because the 518 was so slow. Consequently, a twin-choke Solex carb was fitted from late 1975, but there are no power figures for this.

At the opposite end of the scale from the 518 was the 2002 Turbo. Based on a Tii motor, the Turbo’s engine used a KKK turbo, a different version of the 121 head (with machined chambers), dished pistons and various other details that mean not much directly interchanges. Power was rated at 167hp at 5,800rpm while torque was 240Nm at 4,000 rpm on a low 6.9:1 compression ratio.

The 2002 Turbo made use of early turbo technology, and had the first, small- capacity turbo engine that made it into production. In retrospect, the truth is that it wasn’t very good, suffering as it did with chronic lag and reliability issues that should have put people off turbos for life. However, when properly set-up, it was pretty fast and exciting car to drive. But it was Saab who really took the bull by the horns, developing the turbo-charged four-cylinder into something reliable, easy to drive and economical. 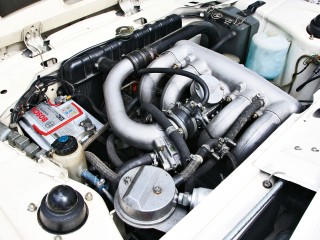 In 1975, the 2002 range was replaced by the new E21 3 Series, which brought with it another raft of revisions. The engine’s head was again revised (coded ‘E21’ on the side), but the biggest change was in the fuelling system. Gone was Kugelfisher mechanical injection and in came Bosch K Jetronic, which was fitted to the new 320i as well as the existing 520i models.

September 1980 saw the end of the 1,600cc engine in the 316, when it was replaced by the 1,800cc. There was also a change to the timing chain setup on all M10s. The original Duplex chain was replaced by a lighter but equally robust Simplex chain and, at this time, the distributor was altered to run in the opposite direction (anticlockwise).

There was a base 315, fitted with a Pierburg carburettor, that produced 75hp and 110Nm of torque, but this wasn’t imported into the UK.

The M10 had been in production for 25 years, yet had barely changed, such was the quality of the original design. However, by 1980s standards, it was heavy, not very good on fuel and engines such as the GM Family 2 were probably better all-rounders by then. What’s more, the M40 was certainly a better unit and a worthy replacement.

The M10 relies on the kind of maintenance that modern engines don’t need. It has manual-adjust tappets that need doing every year or 12,000 miles, and the cam spray bar needs to be cleaned out – remove the banjo bolts, twist it through 180° and run a small drill through the oil holes to open them up a bit. Fit new banjo bolts from BMW as well – the originals always had a habit of coming loose and the new ones have a slightly different thread pitch so they stay in place.

Never ever thread-lock the old ones into place as the stuff will just congeal in the oil hole. The post-1980 Simplex timing chain was very strong, but it has a habit of wearing out the camshaft sprocket. But you can buy these new and they’re simple to fit.

Head gasket trouble is rare, but cracked heads and popped exhaust manifold studs aren’t. The inlet side of the LE Jet injection engines is a swine to work on, and be very careful about swapping cylinder heads – you need the right head for the right pistons and, on the E30, the 318i and 316 heads are different.

Overall, though, the M10 is a very good engine, but it demands regular maintenance. However, it was never quite as bulletproof as some claim, and many were very tired by 100,000 miles, and showing signs of valve guide and cam wear. Low oil pressure can be a problem – you may find it takes ages for the oil pressure light to go out. This can be an O-ring on the pipe from the pump to the block that’s blown out on a cold start, but it’s not too bad to lower the sump slightly and remove the timing chain cover to replace it.