Think of Australia and you’re probably picturing lush beaches incorporating a number of BBQs with the odd boomer, Joey or roo thrown in (NOT on the barbie, of course). Perhaps what won’t have crossed your mind during that rather odd picture is a sleeper-style E30 powerhouse. In fact, you’d be forgiven for thinking that this is just another superclean example, probably running a 325i lump. But, you’d be wrong and to be fair you probably wouldn’t be reading about it here if it was. So, what’s different about this particular E30? Well, it just so happens to be hiding an S38B36 E34 M5 lump under the bonnet… 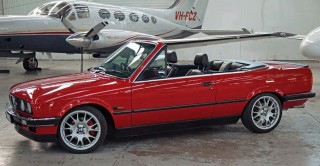 Mike Wilson, from Brisbane, Australia – or the lucky country as he’d so have us believe – is its owner. The 42-year-old factory worker has always had a love for cars and not just Beemers, with his first car being a Mk2 Ford Cortina. “Despite owning a number of other cars, I’ve always loved BMWs. The E30 model in particular is such a great classic driver’s car and the shape is one of the best,” he tells us. His love for BMWs is apparent when you consider his current fleet: an E46 330i, an E21 320i and another E30, a 325i, so it’s safe to say he’s certainly a BMW-head. “The first BMW I bought was an E30 325i that I purchased off a mate whilst living in London in 2003. That’s where the love started, really; I pretty much fell in love with the car instantly. I’d planned on bringing it back to Australia with me, but I went and broke my leg skiing so my brother in law was driving it and was t-boned by a Volvo and it was written off,” laments Mike. After settling back on Australian soil, he started his search for another, which took a few years but eventually unearthed this example, originally a 320i, and Mike admits it’s the first car that he’s really gone nuts with on the build.

The car was in Sydney, which is a good 12-hour-drive from where he’s based in Brisbane, but it was well worth the trip. The E30 wasn’t perfect, with a torn roof and it hadn’t been dry stored or even put in a garage so the carpets were pretty waterlogged. 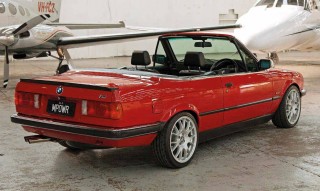 Amazingly, though, there were no signs of rust, which is a big plus when it comes to E30s and wet carpets are an easy sort, after all. Apart from this and little niggles such as worn front seats, a broken odometer and seriously ugly fluorescent orange pinstripes around the wheels, it was in great condition. “After seeing it being left outside and not really taken care of, it turned into a sort of rescue mission.

I just had to have it and do the car some justice, bringing it back to its former glory and then some. And, I don’t regret it one bit!” grins Mike. Initially, there was no grand plan for the E30; “Apart from the obvious replacing of the soft top and removing the horrendous pinstripes from the wheels and a stereo upgrade there was nothing else I had planned for it at the time,” he says. “I was quickly disappointed in the lack of power, though, compared to the 2.5-litre version, so knew I had to do something about that eventually.”

Mike pretty much did all the modifications in one hit and he started by replacing the stock suspension for a set of BC coilovers; “I chose BC mainly because of the price and the good reviews I’d read, and I’m not disappointed!” he says and they’ve been used to give the E30 a purposeful but practical drop. “Because the original 2.0-litre unit was so underpowered, I decided that just dropping in a bigger one was the easiest option. I never expected to buy one that was quite so angry, but this rare S38 just happened to be up for sale as I was looking and in a moment of genius (or stupidity) it was mine,” grins Mike. “The engine itself is stock, but I spent a few months stripping it down, cleaning, painting, powder coating, Zinc-plating and replacing as many smaller parts as I could, as I didn’t want it looking out of place in such a clean car. I bought pretty much everything new including a new fuel rail, hoses, idle screw caps, gaskets, expansion tanks, fuse holder cover and badges,” he adds. While the old engine was out, Mike resprayed the engine bay ready for its new heart but it wasn’t an easy job getting the lump in. 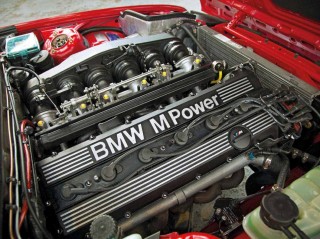 He had to remake andre-route the brake and clutch hoses, as well as relocating the battery to the boot and dropping the front crossmember 20mm. It required new custom engine mounts to get the engine in, as well as doing away with the clutch fan.

He also added an aftermarket oil cooler, custom air box set up, a SPAL pusher fan to the front of a new, larger radiator, a smaller diameter brake booster, which he then moved down and across the firewall a little, as well as a rare thermostat from the older M88 M-spec engines just to make the S38 fit. “Under the bonnet the only thing standard and untouched is the fuse box,” Mike laughs. In addition to stuffing the S38 under his E30’s bonnet, Mike also installed an E34 M5 gearbox, the Getrag 280 five-speed manual, with a 3:45 ratio LSD at the rear end helping to put the power down.

The initial build took 12 months, but by that point he’d ran out of money so had to wait a further six months before being able to order the custom exhaust he wanted. It features ceramic-coated exhaust manifolds with a 3” Magnafl ow stainless-steel catback system, which which splits into two, 2” tailpipes, adding to the discreet look Mike wanted to achieve. The wheels were already on the car when he bought it and were part of the reason the E30 caught his eye in the first place. “They’re a BBS replica, 8×17” all-round, complete with Bridgestone Potenza RE003 215/40 rubber.

I think they’re better than the ones they were replicated from… I do long for a set of BBS RSs though,” he adds. Mike also sourced new wheel bearings along with new bushes and, with the hike in power, decided that the E30 needed a bit of a brake upgrade, so has fitted a set of Mazda RX-7 four-pot calipers up front with larger VW Corrado discs all-round.

As far as styling is concerned, on the outside Mike’s kept it simple and there’s certainly very little here to give the game away. The arches have been slightly rolled, angel eye-equipped headlights have been fitted and the bumpers have been re-chromed, but otherwise the E30 has been left alone, which is no bad thing. 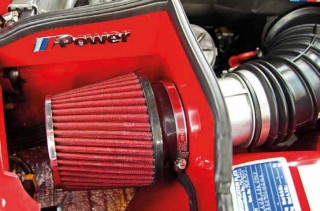 “I just love the classic chrome bumper look, so wanted to keep it original… a classic sleeper, if you please,” Mike adds with a smile. Look inside and you’ll see that the worn original seats have been re-upholstered, an M Tech 2 steering wheel has been added along with an M gear knob and gaiter. He’s also added a dressed up gauge cluster from Germany and a big stereo upgrade running all Alpine PDX and Type R gear. “Much like the outside, the interior is mostly standard, apart from a few tasteful upgrades. I also love my audio so that was a must; I added the speaker pods to the front doors to house 6.5” Alpine Type R speakers, which some would think was sacrilege but they actually look like they belong there,” Mike says.

Mike has built himself a serious E30 and this was no easy job, a lot of work has gone into making this engine fi t into this car and that makes us love this build even more. Keeping the styling stock for that subtle, sleeper look amps up the appeal even further and combining a chromie with an iconic M engine was most definitely a very good move indeed. Of course, even after all that work, Mike isn’t done with his E30 just yet… “I need to raise the rev limiter as it cuts out at 7200rpm,” he says, and then adds “I can barely keep the power to the road as it is but if money wasn’t a problem I’d add a supercharger…

I’m still contemplating it, good dreams,” he smiles. That would make an already special build into something pretty sensational indeed and, with no plans for any new cars at the moment, maybe Mike will be able to turn that supercharged dream into a tarmac-terrorising reality. Watch this space… 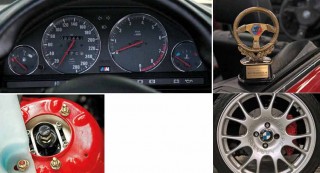 “What’s different about this particular E30? Well, it just so happens to be hiding an S38B36 E34 M5 lump under the bonnet…”

S38 a very tight fi t but worth the effort. BC Racing coilovers with adjustable top mounts. Stylish gauge cluster from Germany. When all that hard work pays off.