Amazing E24 and E28 turbo’d greats. A pair of gorgeous and tastefully uprated sharknosed B7s in E24 and E28 guises.

The function of Alpina, for as long as most of us can care to remember, has been to present a sort of connoisseur’s alternative to BMW’s own M cars. The firm – Alpina Burkard Bovensiepen GmbH & Co. KG, if you want to be precise about it – was established in 1965 as a BMW tuning outfit, gaining many plaudits in racing through the late-1960s and early ’70s, and since the late-seventies it has been synonymous with road cars that offer a certain stylistic and performance-oriented enthusiasm; recognisable by their trademark pinstripes and 20-spoke alloys, they enjoy the distinction of being products of a recognised automobile manufacturer rather than an aftermarket tuner. And in the 1980s, if the likes of the M5 and M635CSi were just too mainstream for you, it was Alpina’s door you’d be beating a path to. 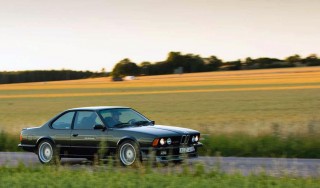 The models in question here are the B7 Turbo and B7 Turbo Coupé, based on the E28 5 Series and E24 6 Series respectively. The former was introduced in April 1984, heralded by Alpina as ‘the fastest four-door car in the world’, boasting a heavily reworked version of BMW’s M30 motor – it had a KKK K27 turbo (the same as you’d find on a contemporary Porsche 911 Turbo), an intercooler, Mahle pistons, a remap and some head work, taking peak power to 300bhp. Production ran for a little over three years, with 236 examples being built (along with an additional 42 ‘B7 Turbo Kat’ catalystequipped cars). And the Coupé version? That also arrived in 1984, and just 130 of these were built, of which 20 were catalyst cars.

These cars positively bristle with geeky details. For example, the 6 Series was both heavier and more expensive than the Five and Alpina was keen to ensure that the perceived flagship wasn’t the slower car, so the B7/1 motor in the saloon version of the B7 Turbo is trumped by the coupé’s B7/2, which offered an even more robust 330bhp, with different cam profiles and adjustable boost settings. The B7 name itself denotes the big-six engine (the ‘A’ designation being for four-cylinder motors, ‘B’ for big-six and ‘C’ for small-six), with the 3430cc units being fully balanced in the Alpina factory – the Mahle pistons are even individually numbered! The intercooler was said to reduce the relevant temperature by around 50° Celsius, and the B7 featured a cunning resonance-intake system that harnessed the resonance from the moving valves to feed the cylinders with extra air, providing up to 0.3 bar of boost up to 2300rpm before the turbo kicked in. These, then, were more than just tarted-up M cars with pinstripes. These were a high-end fusion of sumptuous refinement and race-car technology, smoothed out for the road and ready to play.

Now, there’s one school of thought that considers such machines to be sacrosanct; Alpina put a lot of development time into creating these offbeat miracles, and the discerning customers who bought them did so with their eyes open. As such, many believe these to be the sort of cars that need to be trapped in amber, kept just-so as artefacts for future generations. However, Fredrik Ekroth and Ted Willes are not such people. Theirs is more of a viewpoint that Alpina modified these BMWs to make them better, so why shouldn’t they carry on the tradition? After all, these are first-and-foremost performance machines, and as technology advances it’d be mad not to allow them to evolve, to breathe. Hence the power figures of this striking duo are rather beefier than they once were; at the same time, however, they haven’t been simply blindly chasing horsepower. Usability is central to these cars’ characters, and that is a trait that’s also been preserved. 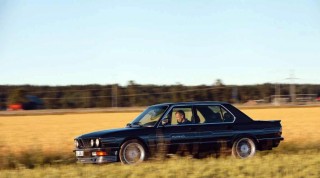 “Why did I choose a B7 Turbo Coupé,” asks Fredrik? “Well, it’s a stunning car! It’s an E24 that goes as fast as it looks. After I bought my 635CSi in 2002 I tried to learn more about the E24, and at the same time I learnt about the B7 Turbos; a B7 Coupé was my dream car for over seven years before I was offered to buy this one in 2010.” Fredrik’s ownership credentials are strong, as his first car as a student was a manual 635CSi which he still owns to this day. And when the chance presents itself to fulfil a dream, it would be churlish to refuse. You only live once, after all.

“The previous owner is a good friend of mine,” he explains, “and is also the head of Alpina Club Schweden. He imported the car from Germany to Sweden in 2005; back then it had a fibreglass bodykit, but as soon as he got it home he started to bring it back to its original looks. I knew everything he had done to it, and that it was in a very good condition! It was partly repainted, and a lot of parts were renewed or changed – for example, all of the front lights, the front spoiler, and all the rubber parts on the bumpers. The cylinder head was renovated and upgraded for higher output, and the boost was raised to 1.1 bar. The clutch was also upgraded, and all three driveshafts were renewed. It also had new dampers and Powerflex bushings up front, the brakes were changed for the current ‘Autobahn package’ E32 750i setup, and the wheels were refurbished.” So not just the chance to buy a dream car then, but to buy one that had received a lot of care and attention, and whose provenance could be easily proven. If only all retro performance car purchases were so smooth. 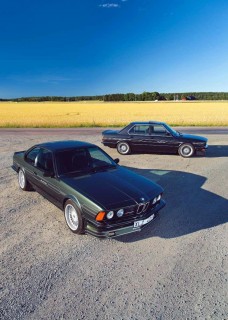 “The car also has a quite fun history,” Fredrik smiles. “It was bought new by a German BMW/ Alpina dealer – Autohaus Borse. They, er, ‘upgraded’ it with a fibreglass bodykit (front, sideskirts and rear skirt), M-tech rear spoiler, and the 17-inch wheels it has today. Alpina launched the 17-inch wheels in 1987 so it was really hot stuff back then! Borse also put special wooden trim around the instruments, and the car was then showed at the IAA Exhibition in Frankfurt in 1987 – that’s cool!”

Fredrik is around six years into B7 ownership, during which time he’s fitted larger injectors, raised the boost to 1.2 bar and had the Coupé remapped to suit – the car’s now producing around 400hp at the crank, which translates to a very handy 355hp at the wheels. The gearbox was also rebuilt by Mobimech in Gothenburg – ‘a Getrag guru’ – while myriad joints and bushes have been replaced. “There’s always stuff to fix on an old car,” he grins.

Turning our attention to the four-door, we learn that Ted’s E28 sits within a broad Teutonic stable of boisterous metal; the collection comprises a Porsche 924 Turbo, 944 Turbo, 996 GT2 and an E36 M3…  as well as another B7 Turbo! That one is no.176, but it’s this car, no.164 that has made us go all weak at the knees today. You see, like Fredrik’s car, it sports all of the 1980s aggression that Alpina’s designers intended, but with some thoroughly modern horsepower figures. In this case, Ted’s car eschews the KKK K27 turbo for a mighty Garrett GT35, which works with an oversized intercooler and the deranged electronic brain from the Alpina E34 Bi-Turbo to produce a solid 360bhp – a sizable gain over stock. “The brakes have been upgraded to the ‘Autobahn package’ E32 750i four-pots,” he says. “The wheels have been slightly upgraded too; the standard 7x and 8×16-inch alloys are in storage as the car now wears 17-inch E34 B10 Bi-Turbo wheels.” You’ll have spotted from the girth of the rear that these offer an extraordinary contact patch; indeed, the rears are 10-inches wide and run 255-section tyres, which certainly helps to harness all of those extra horses.

So how did Ted come by this car then, was it as serendipitous as Fredrik’s acquisition? Um, no, not quite… “There are around fifteen B7 Turbos in Sweden, both E24 and E28, and I called the owners of every single one,” he laughs. “I asked if I could buy their cars, and everybody flatly refused. Most people were nice to talk to but did not want to sell, although some people were not friendly at all and just hung up the phone when I asked if the car was for sale!” But fate did eventually smile on Ted’s quest and, yes, there was an E28-based Alpina B7 Turbo with his name on it; what’s more, the previous owner had given it a nigh-on total renovation, so the car you see here is largely the car as-bought. “I am not a handy man, so I do not repair anything,” Ted admits. “You can ask my wife!” 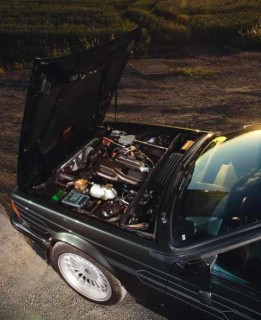 We certainly can’t argue that he’s bought well, the Garrett-boosted saloon offering modern performance in a gorgeously yesteryear package, and the threebox form – which is aging magnificently, it has to be said – is stuffed with all the right bits to combine mischief and whimsy with superlative comfort. Ted almost scoff s when we ask him why he wanted to own such a car. “Stupid question – because it’s fantastic!” A good point, succinctly made.

“I love to drive it when the weather is good,” he continues. “People who know what it is, they usually nod their head and smile.”

“That’s true,” Fredrik agrees. “People are normally positive about these cars, and those who know them really give the thumbs-up! I drive it for joy, and it’s nice to let it breathe on the autobahn when the chance is given – these cars were meant to be driven. And I love to drive it – it’s very different from a regular 635CSi, it’s a much more active car to drive, and when the turbo kicks in it feels like it’s flying! Those long gears and the massive pull is a very addictive feature. The 635 is much more laid back, more of a cruiser – but at the same time, the Alpina is more comfortable.” All things to all men then, it seems. Whatever magic Alpina were weaving in Buchloe back in 1984 has certainly stood the test of time, and with a few choice upgrades, these retro sharknoses are every inch modern classics. Just don’t think of them as museum pieces – as Ted and Fredrik are keen to point out, these cars were built to be driven.

THANKS: “Ando Gunnarsson, Henke, my parents, and my friends Calle and Magnus that gave me the BMW interest.”

“I drive it for joy, and it’s nice to let it breathe on the autobahn when the chance is given – these cars were meant to be driven” 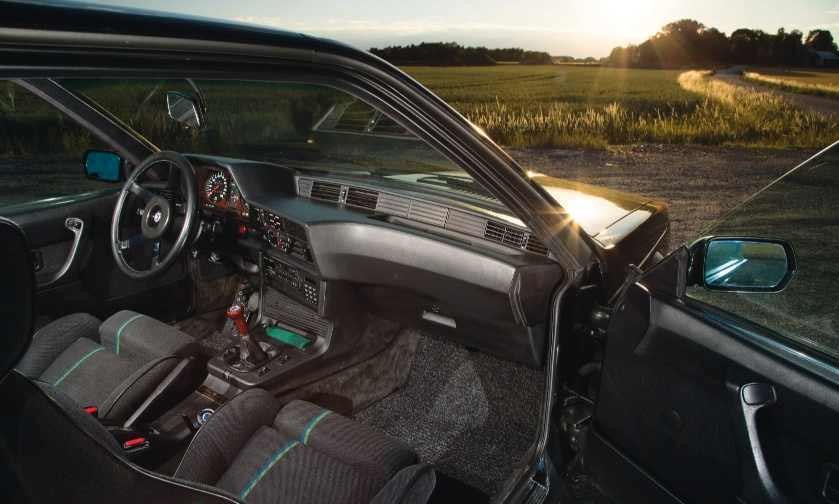 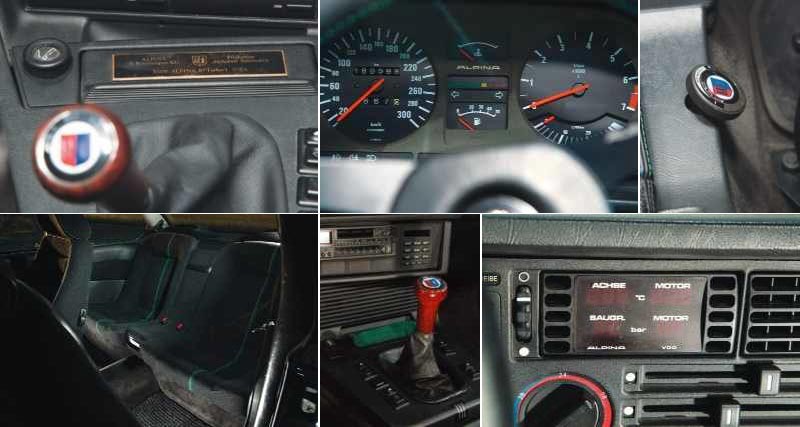 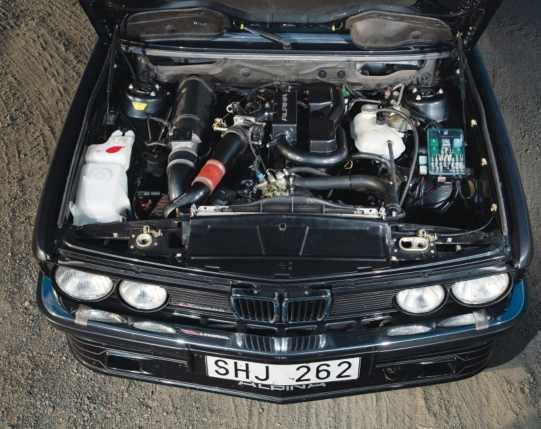