We all want to be different. The desire for self-expression is pretty much the first lesson in psychology and we all find ways celebrate our individuality. But when it comes to classic BMWs who of us can say that they own a unique car, a real one of a kind? Owning the only gravel-spec 635CSi in the world Claus-Peter Werner is one of the select few who can claim that honour. 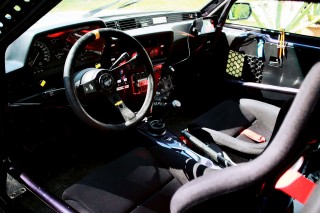 BMW and rallying are not really synonymous like they are in Touring Cars or GT racing. I’ve seen YouTube clips of the glorious M1 on tarmac events in the early ‘80s and used to have an old Duke video of the 1988 Manx rally with Patrick Snijers tearing around the island in the style that Colin McRae would soon come to make famous. But nothing else comes to mind. Certainly not a 635CSi. But the meaning of life is to live and learn, so after seeing this car at the Eifel Rally in Germany I went to the postcard pretty town of Biebrich on the Rhine near Wiesbaden to find out all about this unique machine.

Claus-Peter is a quiet and humble man and in the little coffee shop we met in for the interview he handed me a laminated sheet covered in stamp size shots of some of the cars he has owned and competed in over the years. Over the last 50 years, in fact. Cars like a 1300cc Alfa, Simca Rallye and BMW 318is and a few years ago he ended up renting a battered and not very well prepped 635CSi for a local rally. It was basically a road car with a cage and a sports gearbox… and perhaps not surprisingly it was rather ill suited to the rigours of rally stages. Due to electrical issues and a blown diff just 20 metres from start of the first stage on one event Claus-Peter gave it up as a bad job… He remembered what a nice car it was to drive though, when it ran properly, so when he came across a rust-free track car used for weekend fun on the Nürburgring for sale at just €13,000 he snapped it up… but it wasn’t going to compete against modern machinery.

At a certain age it’s not unusual for rally drivers to turn their attention towards classic cars and in Germany there’s a great club catering for serious classicists. Slowly Sideways boasts over 200 members with some stunning cars but a simple rule that seemed to be firmly barring Claus-Peter to join is that your car has to be either an ex-works example from the ‘60s to the early ‘90s, or is pretty much an exact replica of a historically significant car. All Claus-Peter could find with regard to rallying 635CSis on the Internet were a couple of poor quality photos and he couldn’t tell which rally they were from, nor even which year. ‘Historically significant’ is the catchword for Slowly Sideways, so a 635CSi would have to have had a podium at WRC or ERC level… which didn’t seem likely.

The club founder Reinhard Klien is no ordinary car buff though. He owns what is probably the largest database of rally cars from the 1960s onwards in the world and if a car ever existed it’s in his archive… and his search through the reams of information produced something that made Claus-Peter smile. Back in 1984, in the Cortes de Ingles rally on the island of Gran Canaria Spaniard Fernando Capdevila drove a Group A 635CSi to eighth overall and in the same car the following year got a couple of spots higher, winning Group A both times. (Both events were won by a certain Carlos Sainz in a Renault 5 Turbo.) This meant that there was an eligible car to make a replica of which would be accepted into Slowly Sideways.

But apart from those small photos there was absolutely no more information on the car to be found and the letters Claus-Peter sent to Fernando’s last known address remained unanswered. The original car was a one-off and the replica was going to be as well. But while there are plenty of people happy with their Mk2 Escorts and Opel Asconas there are many in the club who strive to be different. Having the only existant version of a 635CSi was absolutely fine.

Claus-Peter calls himself an office man. An accountant by trade over the decades he’s financed his racing while co-drivers and team-mates doubled as mechanics and this arrangement wasn’t going to change for the new project. Long time friend Rick Kampmann took on the engineering and fabricating work because although the Nürburgring is a seriously tough track to drive a car around fast it’s nothing compared to the pounding of a forest rally stage. The first job then was to weld heavy duty supports for all the suspension mounting points into the body shell.

A set of Bilstein competition shocks were installed but the coil springs were a little harder to find. For the dimensions Claus-Peter needed there was nothing to buy off the shelf so he had to get a set made in a local metal workshop. They’re the same width as the originals but as well as being longer they’re also 15 percent stiffer than standard. The car then stood six centimetres higher which is great for powering through the forest but not so good for the prop shaft which needed to be extended. A sport gearbox from a scrapped car was fitted and the diff and crown pinion swapped with ones from a 518i as they have a 4:11 ratio which helps bias the car more for acceleration than top speed.

Another weak point in the road-going car was the control arms. For 30 years of motorway cruising they are fine but for a weekend on a rally stage… not so much. Rick took a set from an E24 and reinforced them and also replaced the ball joints with uniballs, for both greater flexibility and strength. When Claus- Peter bought the car it had a side exit pipe which although sounded pretty amazing, wasn’t street legal or in keeping with the Group A rules so the glorious and distinctive rasp it now enjoys is Rick’s work too.

The same with the after-market brakes. They might have been much more powerful but for the car to be road legal German law is pretty strict and a set from another 635 had to be fitted. For getting around tight corners in the stages it also needed an auto-release hand brake. From its track days it was already fitted with a well-made cage that fulfilled all the Slowly Sideways safety and period correct requirements.

Instead of completely stripping the car down to paint it the midnight blue body was wrapped in white vinyl and the Shell and Marlboro stickers made by a local graphics company from the photos Peter gave them. The end result, as you can see, is one stunning car and after six months in the workshop it was quite an emotional moment for Claus-Peter to see it for the first time. “I have driven some really nice cars in the past but this is the only one that I really made and it’s an amazing feeling. It’s my car,” he smiles over his cooling cappuccino. “My road car is a Porsche Cayman but when I drive the BMW I get so much more reaction from people. It doesn’t matter what else I pull up at the traffic lights next to because everyone looks at the 635CSi. I love it!”

As good as it looks though it was never intended to be a show car and Claus-Peter wanted to get it into the Slowly Sideways yearly classic rally car extravaganza, the Eifel rally, but with capacity for only 150 cars there is a very long waiting list. The main list included a host of Group B cars, Sandro Munari and his legendary Lancia Stratos, Walter Rohrl in half a dozen of his former works cars, the Pikes Peak Audi…

To prove that he was serious organisers asked him to enter a couple of small local rallies. He did, the car was well received and most importantly was perfectly reliable. Claus-Peter says it’s a joy to drive and last July, a couple of ex-works Audi A2s on one side, Metro 6R4 on the other and a Renault Maxi 5 opposite Claus-Peter parked the 635 proudly… and was astounded that his car garnered as much attention as those around it, especially from surprised BMW lovers who found out they didn’t already know everything about rallying BMWs after all.

And since the car has been finished Claus-Peter has managed to get in touch with the owner of the original. Fernando Capdevila is still fully involved in rally and motorsport and told me little about the original 1985 car. Just like the replica it was a circuit racing car, from no less a company than Schnitzer, which they developed for rally use by the Sauermann BMW team on Gran Canaria. The same as Claus-Peter they had to lift the car with longer springs and softer dampers and also had to change the wheel nuts from a centre-lock to five-stud, but apart from that it was the same as the circuit racing cars.

“The first rally was hard to learn the car,” he recalls. “First gear went all the way to 100km/h so for the next rally we had to change the ring and pinion to get it to perform properly on slow stages rather than the fast circuits it was designed for. With all the weight at the front and all the power through the rear wheels it was always over-steering… but that meant it was a great car to learn how to drive.”

Capdevila went on to win the Group N Tenerife Canary championships in ‘1986 and ‘1987 in a BMW 325i and an M3, then attempted the Paris Dakar with the Camel Range Rover team which netted an impressive stage win. He now owns a rally and race driving school and owns a Metro 6R4. The 635CSi has spent its life on Gran Canaria and is currently owned by a friend of Fernandos as part of a BMW collection. “To find out that after 30 years someone had made a replica of my car was a nice surprise,” he says. “And I would really like to come to the Eifel Rally to see it.” Meeting someone who drives a replica of the car you used to drive is a great way to start a friendship!

This is the 635CSi that Claus-Peter used for inspiration for his replica. It was only with the help of Slowly Sideways organiser Reinhard Klien that he was able to unearth these pictures of the original machine racing in Gran Canaria back in the mid-1980s driven by Spaniard Fernando Capdevila. It was twice a Group A winner.