Buying guide: BMW 3-Series E30 1982-1994 all you need to know about these ’80s saloons. Famous three – buying the car which invented the, er, 3-Series market and gave BMW its ’80s success. Words: Paul Wager. The second-generation 3-Series didn’t invent the ‘premium compact sports saloon’ but it certainly put BMW on the map in the UK and played a significant part in the growth of the brand to its current dominant status.

BMW’s first attempt at a car in the 3-Series mould had been the ‘02 range launched in 1962 as a two-door version of the Neue Klasse saloon which is often credited with saving the company: at the time, its range consisted of motorbikes and bubble cars at one end and expensive V8-powered saloons and roadsters at the other, with not much between. The Neue Klasse cars with their neat, modern style and up-to-date engineering were just what the upper middle market needed and the company hasn’t looked back since. Slotting the 2-litre engine into the two-door cars created the 2002 and its combination of sports car pace, tidy handling and compact size was just what the market wanted, especially the USA. 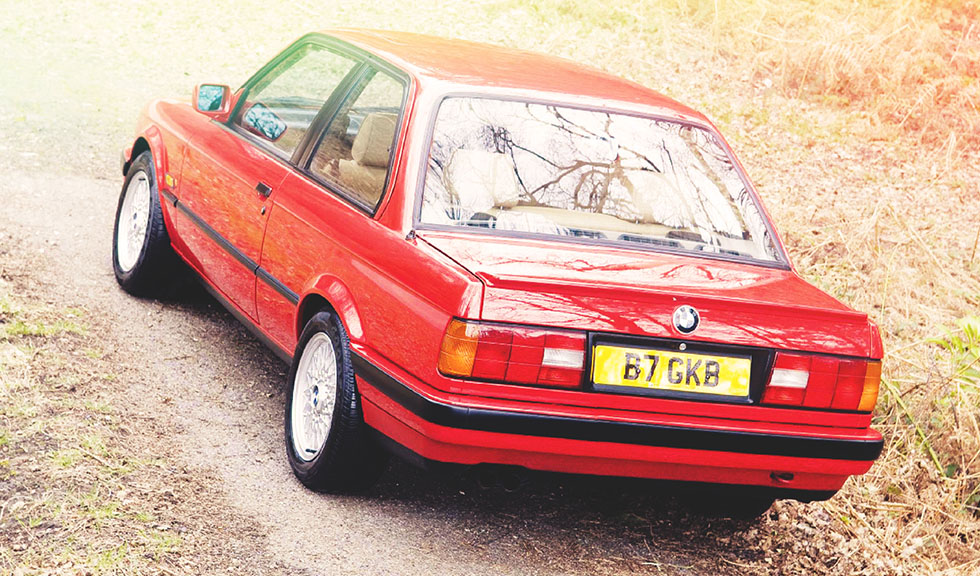 The ’02 was replaced by the first 3-Series in February 1975, in BMW-speak known as the E21 model. It offered a dramatically modern style and continued to offer the same attributes which had made the older car so popular, although now BMW had a new trick up its sleeve: the four-cylinder cars may have carried over the running gear from the ’02 but in 1977 BMW played a master stroke by adding the six-cylinder powerplant from the larger 5-Series cars.

Suddenly an entirely new class of car was created and even though the range-topping 143 bhp 323i was the ‘halo’ model, the more restrained 320i was the bigger seller, buyers loving the refinement and pulling power of the straight-six without having to run a larger saloon car. Some 1,364,038 examples of the first generation 3-Series were sold before it was replaced in 1982 by the second generation, better known to BMW fans by its internal designation E30.

An extensive revision of the first-generation E21 car, the E30 used similar styling but noticeably softened for the ’80s, with its appeal broadened by the addition of a four-door model from 1983, the Touring estate from 1988 and an elegant full convertible from 1985. Like its predecessor, the E30 offered both four and six-cylinder power with the range-topping model now being the 325i, boasting a fuel-injected 171 bhp and looking perfect for the ’80s on BBS crossspoke wheels with the option of a chunky styling kit in Sport guise.

The E30 saloons were effectively replaced by the all-new E36 model in 1990 but the convertible and Touring lived on until as late as 1994. A total of 2,339,251 were sold and in the UK market the E30 was the most successful BMW to that date. The E30 has always been a popular car, with the more desirable models mostly managing to escape the banger years which means there are plenty out there still. Parts support is superb, both from the main dealers and the many aftermarket BMW parts specialists, while the cars are also easy to work on at home. If you like the idea of an ’80s classic with modern performance then the E30 can be a very practical choice. Here’s what you need to know.

Yes, these were well made cars but remember, they were developed in the ’70s and they can rust as well as anything. The 325i Sport has the worst reputation, with grot hiding behind the bodykit and proportionately more of them having taken unscheduled off-road excursions. Look behind the rear wing sections of the bodykit on Sport cars and look at the rear inner arches under the boot carpets: if you can see the tyres, it’s bad news…

On all models, rear wheelarch lips will rot, plus the lower front wings by the sill. Roofs can bubble up around the sunroof, with an odd bulge a way back from the sunroof being a sign of rust between the sunroof mechanism and the roof skin. A new roof skin is the solution so it’s pretty terminal. Also check the scuttle panel by the lower corners of the screen, plus the area round the fusebox under the bonnet together with the same area on the other side.

The four-cylinder M10 engine is essentially a ’60s unit and is pretty bulletproof if it’s properly maintained. The later M40 (belt-driven single cam) and M42 (chain-driven twin cam) can be more troublesome and can suffer from top-end wear and noisy hydraulic tappets if not regularly serviced. The M40 cam belt should be swapped every 25,000 miles. The 16-valve unit is more robust but can suffer from a cracked head.

The six-cylinder cars do have a reputation for cracked heads, so check for oil and water mixing. Otherwise, they’re pretty trouble-free, although they can be a bit clattery from the top end with valve and injector noise even when the tappets are correctly adjusted. The camshaft is belt-driven with replacement every 30,000 miles at which time it’s a good plan to swap the water pump too.

Oil leaks from a cam cover gasket or camshaft oil seal are easily sorted, although a leaking oil cooler and sump gasket are more involved jobs.

The manual box is the Getrag 240 in four-cylinder cars and the 260 in the six-cylinder cars, and both are solid, reliable units which will only give problems if they’ve been run low on oil or badly abused. A vague shift can be fixed by replacing the knuckle in the linkage at the base of the lever – a fiddly but cheap job.

The automatic is the familiar ZF 4HP22 unit which again is a reliable unit but it does pay to check the fluid isn’t brown and burned. Check it using the dipstick with the engine running and selector in Park. The switchable sport/ economy unit commonly found in the 325i uses an ECU housed in the boot and water leaks can cause havoc.

The E30 uses a conventional set-up of front MacPherson struts and rear semi-trailing arms and is easy to work on. The original dampers on all cars will be tired by now and there’s a big choice of replacements from standard-spec to uprated kits and even coil-overs.

Movement from the rear when taking up drive is often the rear axle bushes which need a special tool to change, while failing front outer balljoints are easily sorted by fitting a complete lower arm with joint. Rattles from damper top mounts are similarly easy to swap.

Many of the aftermarket suspension kits will lower the car by 25-35 mm but excessive lowering makes them drive very badly and the camber change will wear the rear tyres quickly. Broken coil springs are common but again are straightforward to swap.

The basic set-up is very reliable and problems will generally be common ones: crusty brake pipes are a common MoT issue, while stuck calipers are easily replaced with an exchange unit. The Bosch ABS can be more of an issue. If you’re lucky, the warning light coming on at 50-60 mph will simply be down to corroded rear hub sensors. More serious issues can be caused by valve blocks and control units but the system must work for an MoT pass which means the light must come on with the key and go out with the engine running.

The electrical system on the E30 is very conventional and as a result is pretty reliable: BMW didn’t start to use electronic control modules until the following generation. The famous service lights will often refuse to go out after a reset which is generally down to failed rechargeable batteries on the circuit board. Replacements can be obtained from Maplin and soldered in.

If the sports seats feel loose, removing them and tightening up all the bolts can make a big difference.

The E30 is one of those cars where the values tend to vary massively. The four-cylinder cars are less sought-after and tend to be the most affordable with respectable examples starting at £1500 and really nice cars from £3000. The exception is the 318iS which tends to command around £6000 for a nice example.

The 320i tends to get overlooked as it’s less economical than the 318i but not much quicker. The model everyone wants is the 325i, preferably in two-door Sport trim which means you’re looking at £4000 for an average car or £6000 for nice standard examples.

The Touring also tends to get overlooked but can be a good way into the E30 experience: reckon on around £1500 for a usable 325i. The Convertible has its own following, and commands similar money to the Sport models.

We spoke to the experts at Lancaster Insurance (01480 484826, www. lancasterinsurance.co.uk) regarding the cost of a classic car policy for a 45-year old living the Gloucestershire GL2 postcode area and driving no more than 3000 miles a year in an unmodified 1988 BMW 325i saloon. Our imaginary owner keeps their BMW in a garage next to the house and has a clean driving licence which they’ve held for over 20 years The car’s got an agreed value of around £5000 and the estimated annual premium to insure the car for 12 months could work out at around £82.31 if the owner is a club member or £99.31 if not. Policy benefits and discounts offered by Lancaster Insurance may vary between insurance schemes or cover selected and are obviously subject to underwriting criteria. An additional charge may be payable.

The factory E30 convertible was produced from 1985 and is an elegant four-seater.

Interior plastics are solid and hardwearing, although the cloth seats can often end up looking pretty shabby. The huge following for these cars means there are loads of used parts available and swapping to leather isn’t out of the question. Non-functioning service reminder lights in the dash are common.

With 171 bhp on offer, the 325i is the most sought-after model in the E30 range and their enthusiast appeal among BMW fans means prices are correspondingly higher than the four-cylinder cars.

1982 The E30 is launched, initially comprising the four-cylinder carburettor 316 and injected 318i, alongside the six-cylinder 320i and 323i.

1986 All 325i models get standard ABS. The 325i Sport is launched, with close-ratio box, LSD, Bilstein suspension, 15-inch alloys, M Tech body kit and sports seats.

1987 The E30 range receives a major facelift. The original metal bumpers are replaced by plastic items, the rear wheelarches are lower set, the rear lamps enlarged and the front and rear valances reshaped. The carb-fed 316 retains the M10 engine, but the 318i gains the new M40 engine. The Touring estate is also unveiled, the original prototype having been created by a BMW engineer in his spare time.