Audi TT 3rd – is the styling of the new TT 8S 3rd generation what you expected?

We know that Audi enthusiasts, waiting for the launch of the new TT, fell into two camps. There were those who wanted the new model to be radically different from the current one, while others, the majority we suspect, didn’t want to see too much of a change.

Well, if you fall into the latter group, you ought to be pretty happy. Yes, there have been changes to the styling and, particularly from the front, you can see that it is a different car, but the overall shape has been retained, so that one might regard this almost as a facelift rather than a new model. But, under the skin, there are important changes which fully justify this being classed as the Series 3 TT.

Let’s start with the overall dimensions. The new Coupé is virtually the same length as before (4180 mm or 13.7 ft,), but the wheelbase has been increased by 37 mm to 2505 mm. This means that the wheels are closer to the ends of the car, and the longer wheelbase ought to have a beneficial effect on ride comfort. The height of the new model is the same as before, while the width is now 1832 mm (fractionally over six feet).

As you will see from the images, the front grille has the bevelled top corners which are becoming a universal feature across the Audi range, and the grille itself is wider and shallower than before. As with the R8, the four rings have been transferred to the panel above the grille.

The headlamps are clearly different to those of the current model, and xenon discharge units will be a standard feature. As an option, it will be possible to order matrix LED headlamps, based on 12 separate LEDs. Combined with these are dynamic turn signals, at the front and the back, which produce what appears to be a moving strip of light, travelling in the direction being indicated.

The rear lights now have a different shape and the high-level brake lamp is a slim band which links the two of them. The fuel filler is typical TT, circular with its set of screws around the edge. Interestingly, there is no filler cap underneath it: the flap itself seals the fuel filler pipe. We believe that this is the first time that Audi has done away with the separate filler cap.

As before, there is a built-in tail spoiler which is raised automatically when the speed exceeds 75 mph. Theoretically, this means that, in Britain, it will never be deployed! S line models will be lowered by 10 mm and are fitted with 18-inch wheels, at least in Germany. Standard models will have 17-inch wheels (although this may not be so for Britain), and 11 different wheels will be available as options, ranging from 17 to 20 inches. 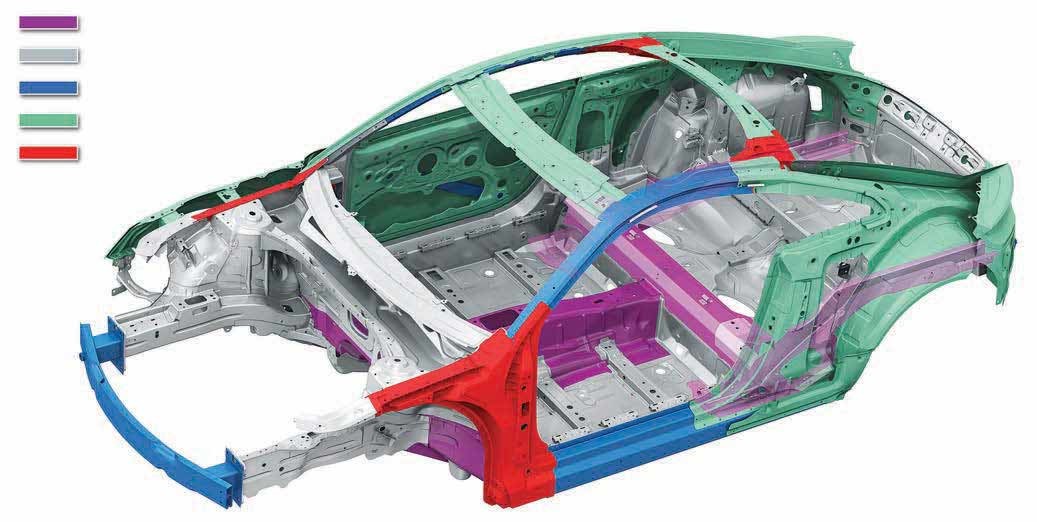 One of the most important aspects of the Series 2 TT was the hybrid construction of steel and aluminium alloy. In order to give a better balance between the weights on the front and rear axles, steel was used at the back end, while aluminium was used at the front. Apart from the improved weight distribution, these measures brought about a weight reduction of 90 kg, and now the engineers have taken this a step further, saving another 50 kg.

Although there have been relatively few changes to the exterior styling, the same cannot be said of the interior. When the first TT was launched, considerable praise was given to the interior design and, to a large extent, much of this was continued over to the Series 2 cars. Now, though, there have been more radical changes, the main one being the advanced instrument panel in front of the driver, where conventional instrumentation is combined with the MMI system. The MMI switches on the console are very similar to those of the latest A3.

A further change has been to place the controls for the air-conditioning system in the air vents themselves. The flat-bottomed steering wheel has been redesigned with rather more aluminium on the spokes, and the airbag inside it takes up 40 per cent less space than before, without affecting safety.

The new instrument panel will have different modes. In normal mode, it will display the normal instruments, with the tachometer and speedometer being most prominent, but these are digital images, rather than the usual mechanical instruments. In the infotainment mode, these instruments become smaller so that there is room, for example, for the navigation maps. With the TTS, there is a third mode which brings the tachometer to the fore.

To begin with, two engines will be available for the TT, a 230 PS version of the 2.0 TFSI unit, and the 2.0 TDI, developing 184 PS. A third engine, another 2.0 TFSI, but with an output of 310 PS, will be available only for the TTS. The 2.0 TDI will only be available with front-wheel drive and a manual gearbox. The 230 PS TT, with S tronic and quattro drive, will have a claimed 0-62 mph time of 5.3 seconds, while the 310 PS TTS, again with S tronic and quattro drive, will achieve this in 4.7 seconds. The control system for the Haldex coupling has been revised so that drive is more readily distributed to the rear wheels. With Drive Select, putting the car into Dynamic mode ensures that drive is transferred to the rear wheels earlier than normal.

Magnetic ride dampers will be available as an option, and these have been upgraded so that three settings will be available, comfort, auto and dynamic. They will be controlled by the Drive Select system which will be an option on the TT and standard on the TTS.

The TT will be available in 11 colours, two of them completely new for Audi, Nano grey and Tango red. Two colours will be kept exclusively for the TTS: Panther black and Sepang blue. Inside, there will now be three colour schemes to choose from and, for S line models, two-tone upholstery will be available, with contrasting stitching. The S line sport seats will have quilting for the centre sections.

Gone is the conventional handbrake lever, replaced by the small control for the electronic parking brake on the console. The TTS has newly-developed aluminium callipers which save 5 kg, and has 338 mm discs at the front. Interestingly, despite the fanfares at Geneva, the new TT is not yet ready for sale because Type Approval is still being carried out. It should not be long, though, before the new TT is in the showrooms. Britain has always been one of its best markets and so, hopefully, it won’t be long before right-hand drive cars are available. As yet, there has been no indication of prices, but we would expect only a modest increase over the current model.

We’ll soon be reporting on many of the technical aspects of the new TT.

Above: The instruments look conventional, but are actually digital displays. Left: The MMI controls are similar to those of the new A3. Note the electronic handbrake control.

Left: The filler cap has disappeared – the flap seals the tank inlet. Below: The airconditioning controls in the centre of the vents. Bottom: Flat-bottom steering wheel now has more aluminium.

Matrix LED lighting will be an option.