The quattro is one of the most important cars Audi has produced. It brought fulltime four-wheel drive to the masses, and went on to become a true automotive icon. It also established Audi as one of the leading innovators – a company ready to push the boundaries with their philosophy of Vorsprung durch Technic – progress through technology. 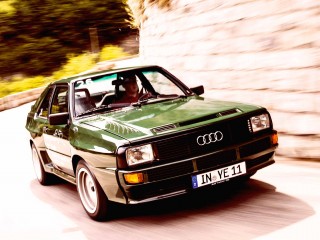 The Ur-quattro (Ur, taken from the German for original) was launched at the 1980 Geneva Motor Show. It wowed the automotive world as the first production car to feature full-time four-wheel drive, something that had previously only been seen on off-road vehicles, such as Land Rovers.

The project was originally conceived when chassis engineer, Jorge Bensinger, had driven VW’s Iltis in Finland. The four-wheel drive military vehicle was so competent in the snow, that he suggested using the technology in a road car, initially an Audi 80.

The project was given the green light in 1977, and, following various tests, including at the notorious Turracher Höhe (one of the steepest roads in Europe) work began.

The breakthrough came after a centre differential was deemed necessary to improve the driving experience. A second differential was placed longitudinally via a hollow propshaft, which simplified things and reduced weight, so no heavy transfer box was required.

With their eyes on competing in rallying, Audi planned an initial run of around 400 cars to satisfy the homologation rules of the time (this stated that a minimum number of road cars must be produced, and many stock parts used on the competition version). However, such was the demand for this new, four-wheel drive coupé, full production was given the  go-ahead.

British designer, Martin Smith, was in charge of creating the quattro’s unique style, a task he  took to with some verve. The sombre looking 80 Coupé on which it was based certainly needed livening up, and the iconic box-arches transformed the car into a muscular beast. It included deeper, more aggressive front and rear bumpers, twin-exit tailpipes and a larger rear wing, plus  sporty alloys and a lowered ride height. The design still looks fresh today, more than 37 years since the quattro was launched. Each quattro was hand-built in Ingolstadt. It took a full week (around 40 hours) to build each car, which was then put through a punishing testing schedule. This included road and track driving and the  relentless ten-minute rain test. Around three cars per week were produced by a small team of around  50 – remarkable for a high volume manufacturer such as Audi.

When it was launched at the 1980 Geneva Motor Show, the quattro was a revelation. It boasted permanent four-wheel drive, a fuel injected 160bhp engine (later 200bhp) and two extra lockable differentials. However, at getting on for twice the price of a regular Coupé GT, the quattro, although highly accomplished, was a very premium product.

The quattro received many revisions over the years, perhaps the most significant being the MB-engined 2.2-litre version in 1987. Refinements to the ECU and differential, plus many other small updates transformed it into a far more refined car. By the end of the ’80s Audi wished to end production of what had become an expensive product. Let’s not forget that it was still hand-built, something that really could not be sustained.

So, after 11 fantastic years, production ended with the final version – the RR-engined, 220bhp 20v model, rolling off the production line in 1991. The Ur-quattro remains a true motoring icon, as instantly recognisable today as it was back in the ’80s. Technology may have moved on immensely in the last 30-odd years, but every quattro sold today owes its existence to the original and, many would say, best performance car that Audi has made.

Back in the 1980s, motorsport homologation rules dictated that manufacturers must use a certain number of production parts in their rally cars. This forced limited runs of cars to be made (at least 200). The Sport quattro SWB Coupé featured lots of parts that would be needed to make the rally car competitive. This included a new, alloy 2.2 20v engine (making 306hp), lashings of Kevlar parts, uprated suspension and, of course, that distinctive, 12.6in shorter body (helping reduce weight by 300kgs). 214 Sport quattros were produced, with just 164 actually sold, so they are extremely rare beasts. In late 2016, a UK-registered Sport quattro was sold at auction for over £403,000. We’ll be featuring it later this year.

The Ur-quattro was tested to its very limits. 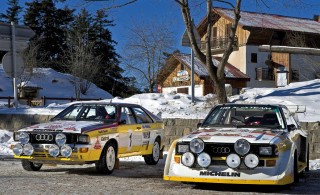 Part of the reason for developing the quattro was so that it could be used in competition. It was no surprise then, that the first four-wheel drive car went on to dominate the World Rally Championship. In fact it was the association with rallying that really put Audi on the map.

With no experience, and a brand new car with a complex set up, Audi struggled to begin with. Although the car was very quick on account of its staggering grip, reliability let the team down. It wasn’t until the A1 and A2 arrived in 83/84 that things began to improve. The new Group B car was heavily revised with an alloy block and an overall weight of around 1000kgs. By 1984 Audi finally succeeded and claimed the WRC and drivers titles with Stig Blomqvist at the wheel.

By 1985, dominance by the 205 T16 forced Audi to make drastic changes to the car. Rather than develop an all-new Group B machine, they heavily modified the existing quattro to create the ‘Short Sport’. It also led to the legendary Sport quattro road car, of which just 214 examples were made to satisfy the rules of homologation.

With more power and many other improvements, the much shorter  S1 E2 became a real contender and the poster car for a generation of petrol heads. This squat, almost cartoon-like machine, had a huge number of fans, not least because of the sound of that glorious  shrieking five-pot, punctuated by the bang, bang of anti-lag. After Group B was outlawed in 1986, Audi continued with the S1 E2 in Pikes Peak guise. Power rose to over 600bhp and a wild aero kit was developed. At the hands of The Master, Walter Röhrl, Audi won the Pikes Peak event.

40 hours to hand-build each car

1977 Inspired by a 4WD VW military vehicle, the green light is given to engineers to begin developing a four-wheel drive production road-car.

1980 The quattro goes on sale in Germany. The left-hand drive only coupй featured the 2.1-litre 10-valve WR engine, making 200bhp and 210lb/ft. Early quattros can be differentiated by their quad headlamps.

1983 The digital dash appeared with its distinctly ’80s green glow (which later became orange). This year also saw the quattro launched in America.

1984 Revised suspension was fitted, along with the steering wheel from the Audi 200. The tyres were also improved, moving up from 6 to 8ins wide.

1985 In 1985, there was a mild facelift with the front grille and headlights being replaced with sloping items. Tinted rear lights were fitted and the diff lock was changed to a rotary knob rather than pull type.

1987 In 1987, the 2.2-litre 10-valve MB engine was fitted to meet tougher emissions tests. It featured many revisions including ECU controlled timing, boost and fuelling and a knock sensor. The brakes were improved and the open diff replaced with a Torsen.

1991 The final quattro rolls off the production line and heads to the Audi Museum.