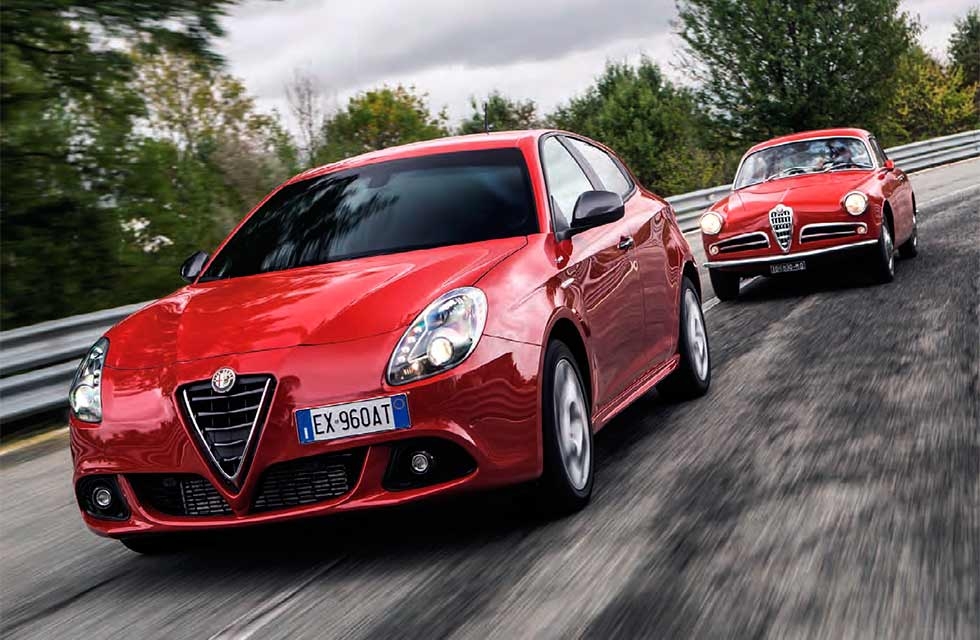 What’s in a Name? Alfa Romeo’s revival of the Sprint title is a bold move, but does the new car live up to its name? Story by Richard Bremner. Photography by Alfa Romeo and Phil Ward.

Alfa Romeo Giulietta Sprint Living up to its name

Gambling – an often solitary activity, involving horses, scratchcards and fruit machines. Occasionally it turns slightly sociable with roulette, poker and office syndica tes of hopeful lottery winners. And then there are your industrial gambles, where big businesses make high-risk bets on investment-heavy industrial strategies. Which was precisely the kind of bet that Alfa Romeo was taking in the early 1950s when IRI-Finmeccanica, its state-owned holding company, gave the go-ahead to invest in a new small car. That was one aspect of the gamble. The other involved a lottery, some interest-paying bonds, glittering prizes and eventually, the whiff of a scandal.

The interest-paying bonds were sold to the public to part-fund the project. To give the buyer an extra incentive, Alfa planned to give away one new car for every 1000 bonds sold. It was certainly a novel way to finance a new model, and an apparently successful one at that, the company providing no less than 200 cars to these randomly chosen lottery winners. And it is the 60-year anniversary of the car that these bonds paid for that Alfa has lately been celebrating.

First, with a car that you can actually buy, called…. Giulietta Sprint. Sadly this is not a small, pretty, rear-wheel drive coupe but a new version of the Giulietta hatch, which is undoubtedly one of the better cars to have emerged from the company. In this form it comes with a new 150HP (148bhp. Ed) version of the 1.4 turbo MultiAir engine, which fills the sizeable gap between the 120HP and 170HP petrols. The Sprint also wears a modest array of add-ons, among them a rear diffuser, sill extensions, new 17in alloys, ‘Sprint’ badges and an ‘oversized’ exhaust tailpipe. Not a huge number of practical differences then. It’s the same story inside where ‘Sprint’ stitched Alcantara and fabric seats, revised instrument graphics and weirdly squidgy faux carbonfibre décor inserts are the most noticeable signature features. The Sprint is based on the recently facelifted Giulietta and as we shall see, produces a surprisingly agreeable package, even if it’s a little cynically conceived.

Alfa also celebrated by laying on an impressive array of older Giuliettas at the Sprint’s launch, the most mouth-watering a 1962 Giulietta SV Coda Tronca. But there was no key-rattling until the attendant hacks had heard the intriguing history of the car that was the making of the modern Alfa Romeo. The Giulietta set the design, mechanical and market template for the next two decades, and defined the soul of post-war Alfas too. It provided the company with its four cylinder twin-cam building block, set new standards of steering, handling and roadholding, established the pattern of offering a saloon, a coupe and convertible derived from the same mechanical confection and launched a compact, premium, sporting saloon years before BMW did the same. It also transformed Alfa into a mass-maker of small, high-quality cars from a low-volume maker of handbuilt, high quality cars. And even made it a profit.

Alfa needed a small car because its big ones weren’t selling. The war had flattened much of its Milan factory, despite which it had managed to make the 6C 2500, a large, quietly glamorous car that was too expensive and too dependent on pre-war technologies to provide much of a business future. The less expensive 1900 followed, this unadventurously contemporary-looking saloon was the company’s first monocoque design and the first user of a four-cylinder twin-cam. It was closer to what the market needed, but still too big and too pricey. Something more affordable was required.

Alfa considered 800cc, 350cc and even two-stroke machines, as well as a front-drive 750cc powertrain that gave the Giulietta project its 750 codename. But it eventually settled on a 1300 positioned above Fiat’s new 1100 saloon. The commercially vital saloon would come first, followed by a low-volume coupe and spider. That was the plan, but the reality was different. The science of noise, vibration and harshness suppression was a young one 60 years ago, and the Giulietta was emitting rude mechanical rumblings that were proving as difficult to shift as a Chianti stain. It was late, and by 1953 the newspapers were beginning to sniff a scandal around the non-delivery of prizes from a government-owned business. The winning bondholders had been told to expect their prizes during 1954, but the saloon was a year away.

It was then that engineers Francesco Quaroni and Rudolf Hruska had a brilliant idea. Because the Sprint would be produced in far lower numbers, its design and build were to be outsourced to coachbuilders who could turn the project around far more quickly. Only 1000 Sprints were planned, requiring nothing like the manufacturing automation of the saloon. Work on its unique design had begun in 1952, a set of concept sketches and 1:10 plaster models produced by in-house designer Giuseppe Scarnati.

These were used to produce a pair of prototype mules for testing the Giulietta’s mechanicals. Scarnati’s design was provided as a starting point to the Bertone, Ghia and Boneschi bodyshops with a rapid request for their own proposals.

Bertone’s proposal won, designer Franco Scaglione adding elegance and harmony to what was recognisably Scarnati’s work. Bertone would manufacture the bodies, which were shipped to Alfa’s Portello plant for final assembly. Hruska was able to display a finished example of the Sprint at the 1954 Turin show, a development that reassured the winning bond-holders if not Bertone, whose small coachbuilders wasn’t geared up to deal with a huge influx of orders. Which is exactly what arrived when this pretty car was unveiled, 700 orders taken in just a few days. In time, Bertone would build 39,654 Sprint bodies, the Giulietta propelling his business into the big time.

It did the same for Alfa, too. The saloon appeared at the Turin show a year later, together with Pininfarina’s Spider, all three becoming a major success. And this trio was far from the complete family. Still to come were the lightweight Zagato-created SV coupe, whose alloy body was built out of a crashed Sprint Veloce, the sylph-like, ultra-aerodynamic Bertone SS and more prosaically, the Giulietta Promiscua estate.

And it’s the most exciting of these that we’re trying today. Zagato built 200 SZs, the last 30 flaunting elongated bodywork and an abruptly cut Kamm tail to produce what became know as the SZ Coda Tronca. The resculpting smoothed the Alfa’s high-speed passage through the air to 124mph, an amazing speed for a 1300 in 1962, as was the twin cam’s 100bhp output. That it had just 874kg to propel only heightened the SZ’s pace, and the pleasure of driving it.

Which is considerable, even at speeds well below 124mph. It starts simply with the business of getting in, the low roof and delicate alloy doors demanding more than average contortion to land your rear on the driving seat. Which is small, and with its flying buttress side supports, surprisingly comfortable. Not long after you’ve occupied it you notice that the floor is covered with the very same vinyl. Before that, however, you’ll be feasting on the immaculate, crackle-black finish of a dashboard that’s utterly bereft of padding, though not short of an instrument or two. A rev counter dominates – the SZ was at least as much race car as road car – flanked by a speedo and a cluster of lesser dials that include water and oil temperature gauges to encourage you to warm the twin-cam through before quick-spinning its crank.

In fact, it won’t be long before you’re wondering if somebody has already damaged this engine, so forceful is the rhythmic cracking that erupts at 2500rpm. This is the sound of the deep and potent air ingestion achieved by two high-lift cams, their valves and a pair of Webers almost as big as the cylinder head. But while you’re wondering if this is what the expensive mashing of a failing big-end sounds like, the revs climb to 4000rpm and an atmosphere of (relative) calm arrives, the twin-cam sounding sweet, keen and free. There is nothing wrong with this engine.

There’s not much wrong with the rest of this car either. Although your head almost rams the ceiling, your knees are bunched like a rower’s and its pedals hinge from the floor, the SZ is an easy car to drive. Its engine is well-behaved despite the high tune, the gearlever reminds you that it’s attached to what is possibly the most satisfying shift ever and the brakes deliver enough stopping power to tempt you into plenty of go.

In fact, the SZ isn’t especially fast – road-tests of the day quote around 11.2 seconds to 60mph for the short-tailed version – but feels it because there’s such an exciting commotion of motion. There’s exquisite tactility too, from steering that feels so like the live mechanism that it is, to a seat that tells you plenty about the forces playing on this car at speed. The SZ noses into bends on little more than light twist of lock, and with no signs of unsettling instability. Though you might be unsettled at first, this car rolling, you’ll think, as if something was missing from its suspension. An anti-roll bar, perhaps, or damper oil.

But this is as it should be. All cars rolled more 60 years ago, the Giulietta among them, and once you’re used to it you realise that it does rarely damage the SZ’s agility (although S-bends demand some delicacy) and delivers a ride far more comfortable than you’d expect. Best of all, though, is the harmony of its controls, the mechanical faith of their reactions to your inputs. It doesn’t take long to feel deliciously embedded with this car despite its ancient ergonomics. And it’s wistfully easy to imagine how satisfying it must be to race.

All of which seems a long way from today’s front-wheel drive, ESP-protected, practical hatchback of a 2014 Giulietta Sprint. And it is. But what the two have in common is an engine that pulses rortily under acceleration, even if the MultiAir’s music is vastly mellower. You can hustle today’s Sprint through tight turns with impressive abandon too, the Q2 traction control and subtle ESP tightening the car’s line to unexpected effect. It’s hardly as rewarding as the SZ, but it’s also vastly less likely to throw you off the road, and almost certainly faster. As a 150HP Sprint, the Giulietta has developed into a well-rounded car with few serious drawbacks other than its disappointing CO2 numbers, which is a modern complaint that would mean nothing to the driver of a 1954 Giulietta, never mind the helmeted pilot of an SZ.

BELOW: Beautifully prepared SZ Coda Tronca put in a spirited performance on the track.

ABOVE: Wheel design is exclusive to the Giulietta Sprint. UK market will have this single exhaust version. RIGHT: A fine selection of classic Giuliettas including a rare SZ Coda Tronca.