Smooth and stanced, a glittering monochrome glowers out of the white. No matter where you send your eyes, from the barren floor to far off ceiling, the car brings them back. Left, right, up, down and they always land on the E92’s strong shoulders, sliding down past the pop of an angel eye headlight and settling on the five jagged struts of each BBS RF alloy. Outfitted in Space grey and accessorised with the dense glitter of clear-lacquered carbon fibre, this 3 Series is four-and-a-half metres of customised car couture. 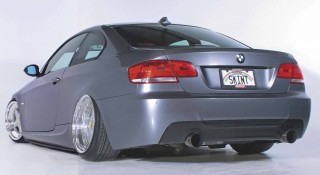 The filled front bumper, custom dual 4.5” exhaust pipes and everything in between sit low; the Unique Customs side skirts graze the ground as Elliot Carter’s 325i pouts out towards the world. The V5 says 2009 but this coupé can’t be nine years old: every styling slash speaks more of tomorrow than yesterday. Stare a little longer and each mod talks of an alternate future, a mechanical metropolis where the car’s the star and an air-bagged E92 is a six-cylinder supermodel.

Sweet and neat the build might be but Elliot didn’t originally plan to end things here. Until the prospect of an E36 project caught his attention, he was all lined up to throw another six grand of spec at his low-slung 325i. Changes were to include a carbon fibre CSL boot lid, carbon fibre front wings and Recaro Pole Position front bucket seats. The paintwork would have also seen attention, with a full respray in rich, yellow-tinged Porsche Mode Grey, while the wheels were to reappear either in black and gold or with complete copper-plating.

Backtrack 18 months and Elliot was collecting the 325i, which was then an entirely standard road car. After months of saving and years spent tooling around in his previous car, an aggressively-lowered Vauxhall Corsa, he finally had the chance to slip into the Coral red driver’s seat of his new BMW. “I was set on an E92 and this is only my second car,” he explains, “I wanted a Space grey example with Coral and a petrol straight-six so those were the only cars I looked for.” Having finally found an example which met his specifications, Elliot enjoyed the car bonestock for six months. 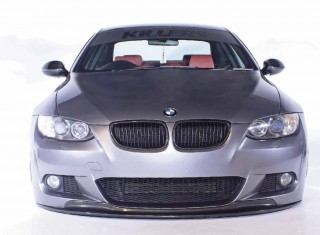 Before any mods could appear, disaster hit. And hit hard. While Elliot was enjoying a meal with his friends, someone kicked the rear quarter panel concave. “They did a good job of it! I had to get a new rear quarter, a new boot lid and a new rear light. It took £2500 at cost but would have been a full £13,000 if I’d gone through a BMW dealer… Sometimes you just have to bite the bullet.”

Just two days later, the 325i rolled into Doncaster suspension specialist Only Charged Dubs as a standard BMW and rolled out a tarmac-toucher. It’s all thanks to full air suspension, using Air Dynamics performance struts and air bags front and rear to bring the E92 as low as Elliot might want to go. It wasn’t all plain sailing, though. Only Charged had to get creative at the rear, using a tailormade arrangement with custom bags to avoid fouling the driveshafts. Head to the rear, pop the boot lid and you’ll spy the components that keep everything under control. Also added by Only Charged Dubs, the system uses an AccuAir air tank and twin Viair 400C compressors to inflate and deflate at will. While the Only Charged team were working behind the seats, Elliot asked them to install something special: multi-coloured LED under-lights. “They’re more of a show point,” Elliot explains, “it was something more to add to the car, something to add to its arsenal. I wanted to show-off the boot build, I didn’t want it to be bland and wanted people to have an interest in it. They’ve captured that really well.” Operated by a remote control, the system can bathe the boot carpet in almost any colour you can imagine.

It’s not the only piece of electronic action fitted to the E92. Two days after getting his car back from the suspension builders, Elliot added an AccuAir iLevel system to manage the flow of air to the bags and an E-Level controller for setting his stance from the driver’s seat. Were that not enough, the system also has an app which allows him to adjust the car’s ride height from his phone. Swish. 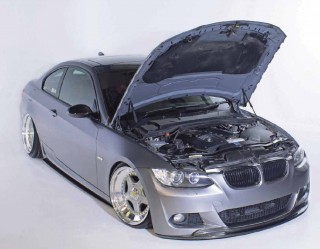 If you’re going to rest arch on alloy, you might as well have the rims to match. With air suspension complete, Elliot started the search for suitable wheels. First thoughts turned to Rotiform and their three-piece BM1s but price ruled them out. “I still wanted to be different, so I phoned my friend Harvey, who owns a modified 1 Series, and said ‘Sell me your wheels!’” He agreed and Elliot found himself the owner of four 17” BBS RFs. The wheels were right but the size was wrong. Elliot wanted 18s and decided a step-up kit was the way to go. Wheel Unique took on the challenge, and what a challenge it was.

“We had problems,” Elliot confesses, “the first guy backed out and it took quite a while to source another fully-custom stepup kit from the USA.” It was all worth it. Four months later, the wheels were on the car just in time for Modified Nationals, where the Elliot entered and won the Best Wheels award.

Walking around Modified Nationals, Elliot also stumbled on another aesthetic flourish for his build. “I saw it and thought why not? It gets a lot of attention. All my money goes into cars or fashion, so it really resonated!” He’s talking, of course, about his ‘Skint’ show plate. Today, it’s surrounded by an equally eye-turning BBS plate holder. Elliot secured it from an American Instagrammer and BBS ambassador who was selling brand memorabilia. “He wasn’t interested in sending stuff outside the US,” he remembers, “but I showed him my cars and my wheels and he sent it over!” Over summer 2017, the E92 was treated to more go and more show. Performance came first, with an RK-Tunes intake and ECU, raising the rev limit and adding a little power, while a full MSL Performance 3” exhaust system with custom 4.5” dualexits lays down the rasping, stone-edged loud. A month later, the 325i got the look to match: a spending spree with SSDD adding a front splitter, mirror casings, kidney grilles and a 335i rear diffuser, all made of carbon fibre. Custom side skirts, designed and directed over the phone, complete the transformation. “It definitely raises some eyebrows,” Elliot smiles, “I’ve taken it to a London work meeting where literally everyone else turned their nose up!” 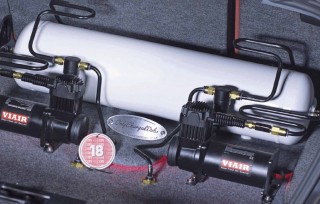 With the E92 complete, Elliot has set his eyes on more performance-oriented pastures. “I’ve bought an E36,” he explains, “and some E28 alloys, so hopefully I’ll be telling you all about that in 12-18 months. It’s just going to be a bit of track-focused fun: the plan is to add big brakes, a full roll-cage, bucket seats, centre-lock alloys… and a turbo!” Further along the road, Elliot plans to graduate from straight-six sweetness to a full on, V8-powered super-saloon lunacy. Right now, he’s torn between the cloud-crushing roar of a Mercedes-Benz C63 AMG and the 560hp thunderclap of an F10 M5. With options like that, he can’t lose.

But that’s future talk. For the rest of 2018, the focus is on enjoying the 325i, both as a daily driver and at shows around the country. “Within the UK, we do every show you could imagine,” Elliot smiles. He’s not afraid to take the E92 long distances either, with a channel hop to the French VW Days event also planned. “When we go to Goodwood for Players Classic, for example,” he adds, “it’s a four-hour- drive but it doesn’t bother me. You’re with your friends, you’re having a laugh and we’ve all got a common interest. If it isn’t modified, it’s just traffic!”

THANKS Wheel Unique, he’s been a mad help with wheels and spec, everyone at Auto Finesse for helping with sponsorship and cleaning products, Chace Gittings and Adam Jasper, two very close friends who have helped me do everything from prepping it before shows to mechanical work and servicing, Team Untamed, who’ve supported me a long time, my mum and dad for supporting me through anything I’ve wanted to do, Mark Jones, my uncle, who’s helped me mechanically and Rufus Wilson of Rufless Films and his infinity cove for letting us shoot there (@ruflessfilms) 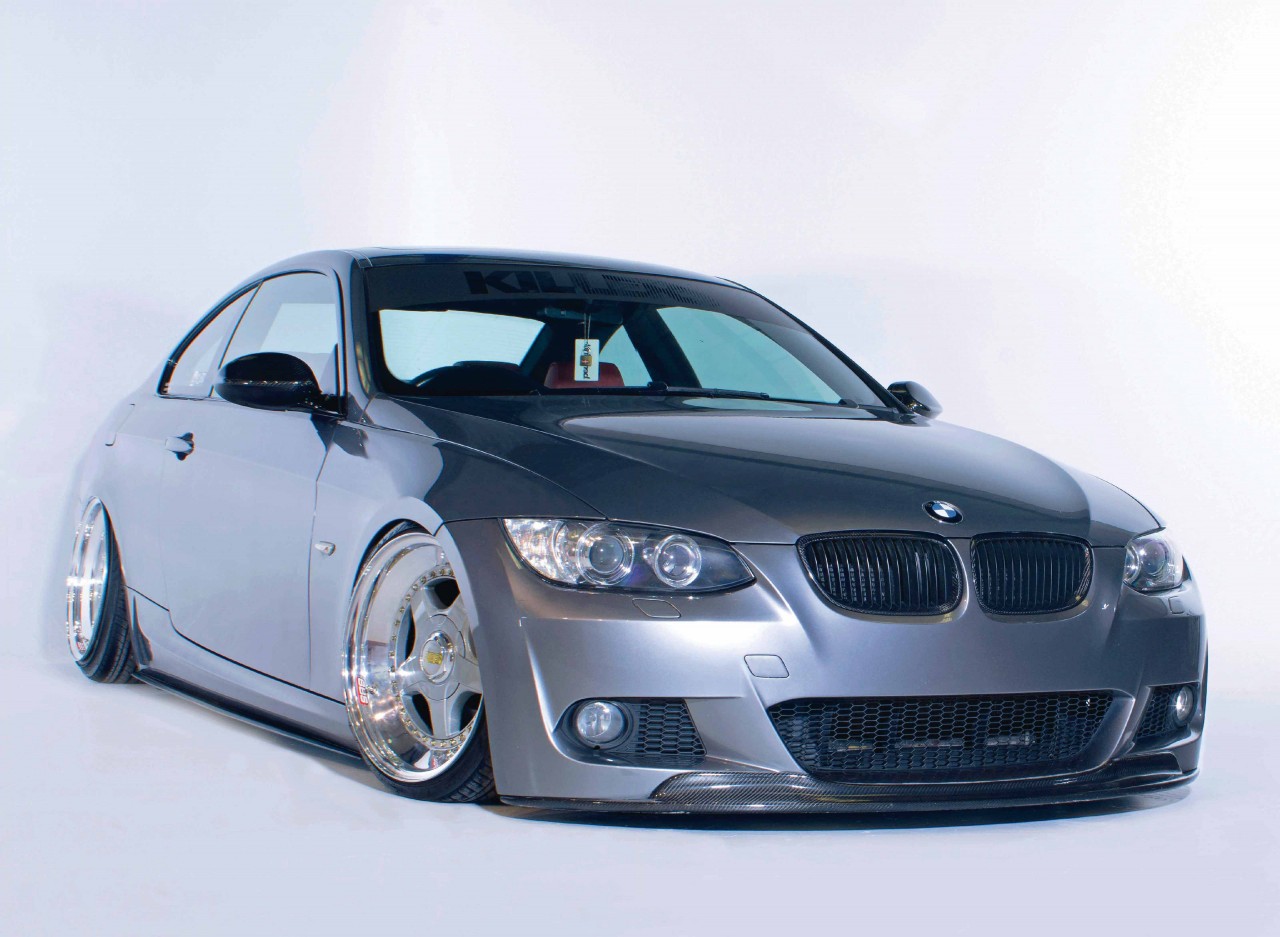 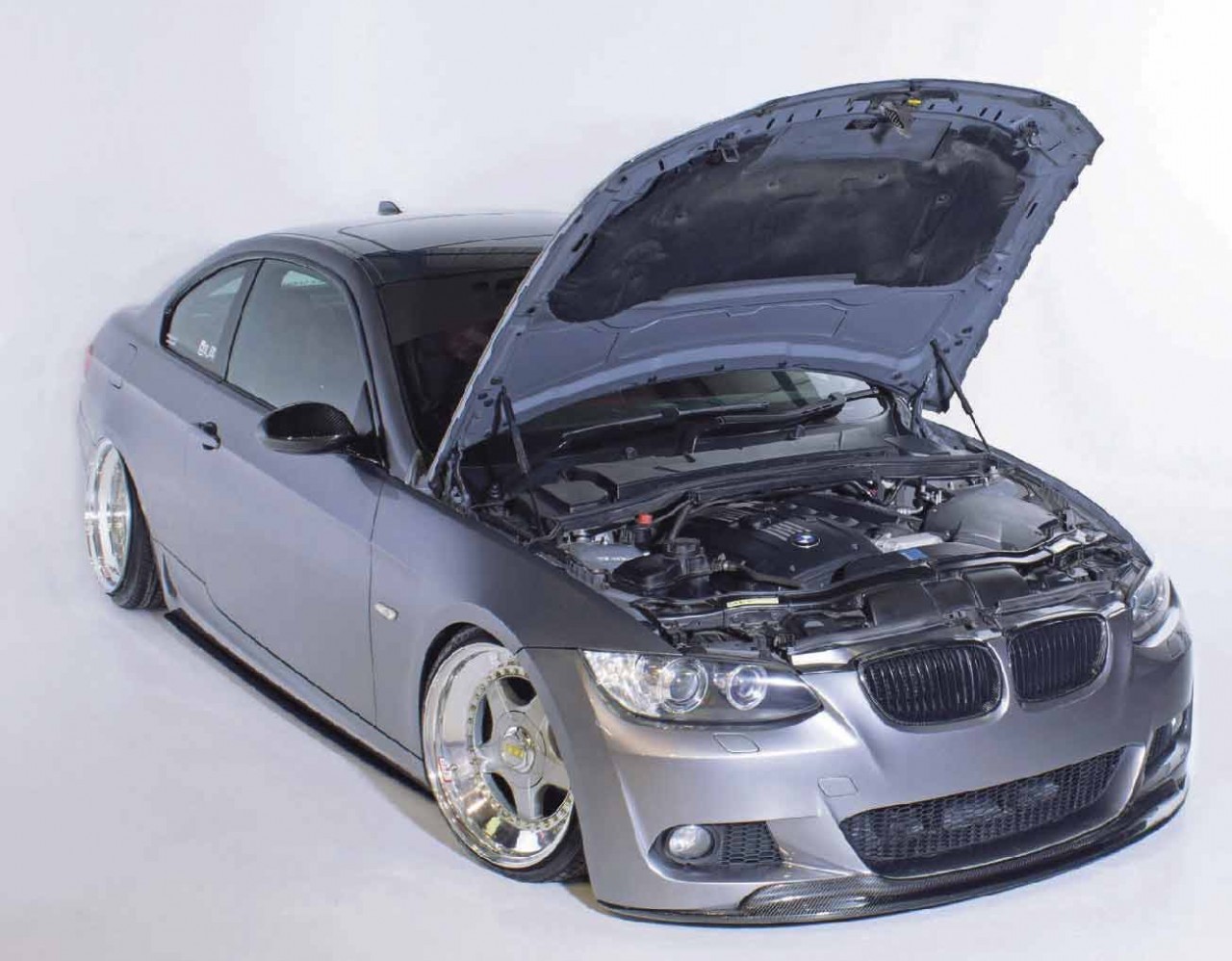 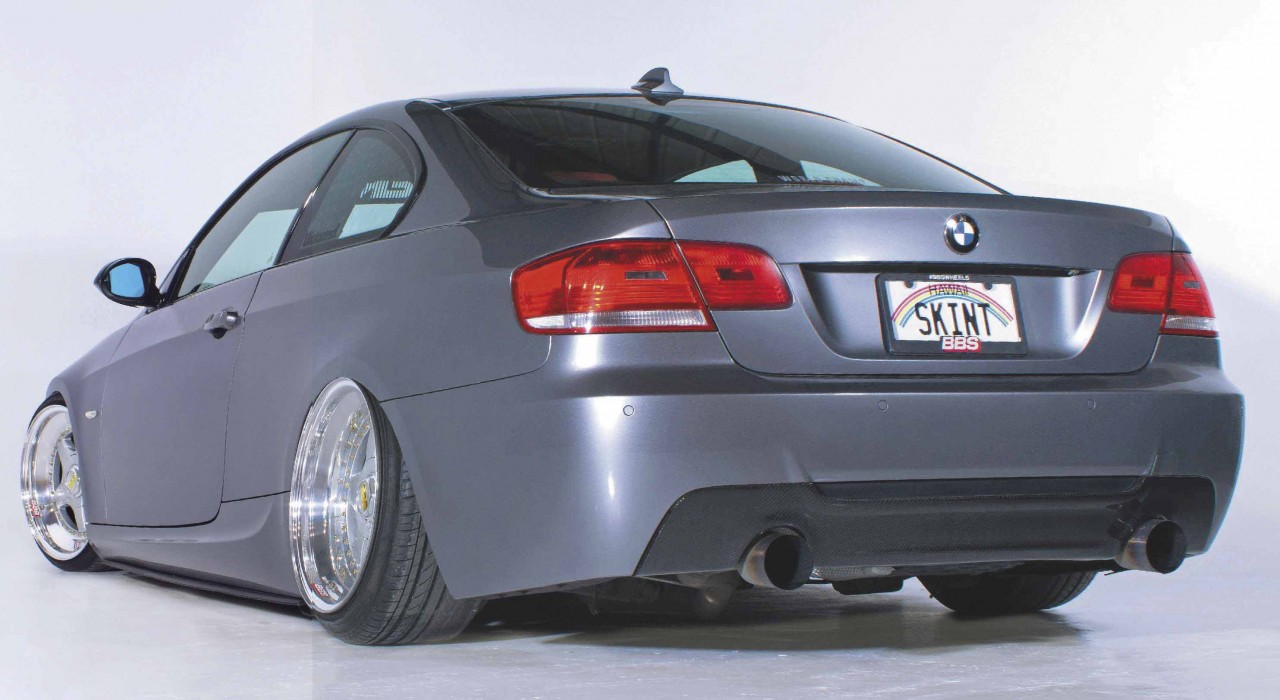 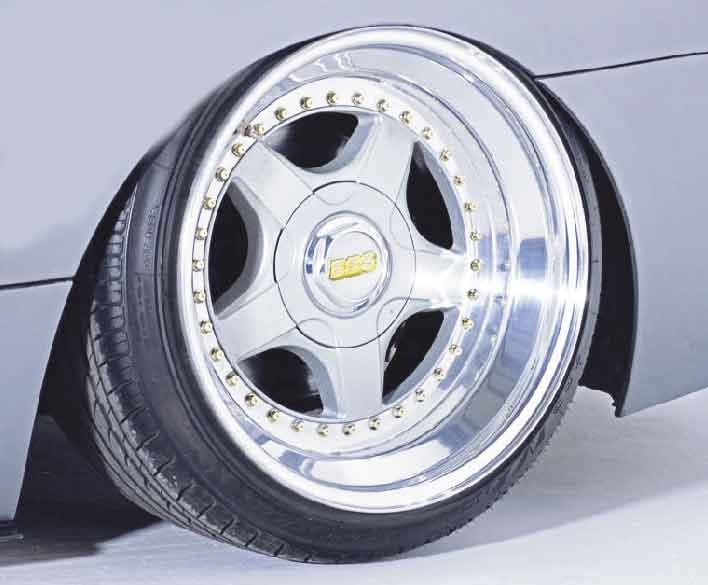 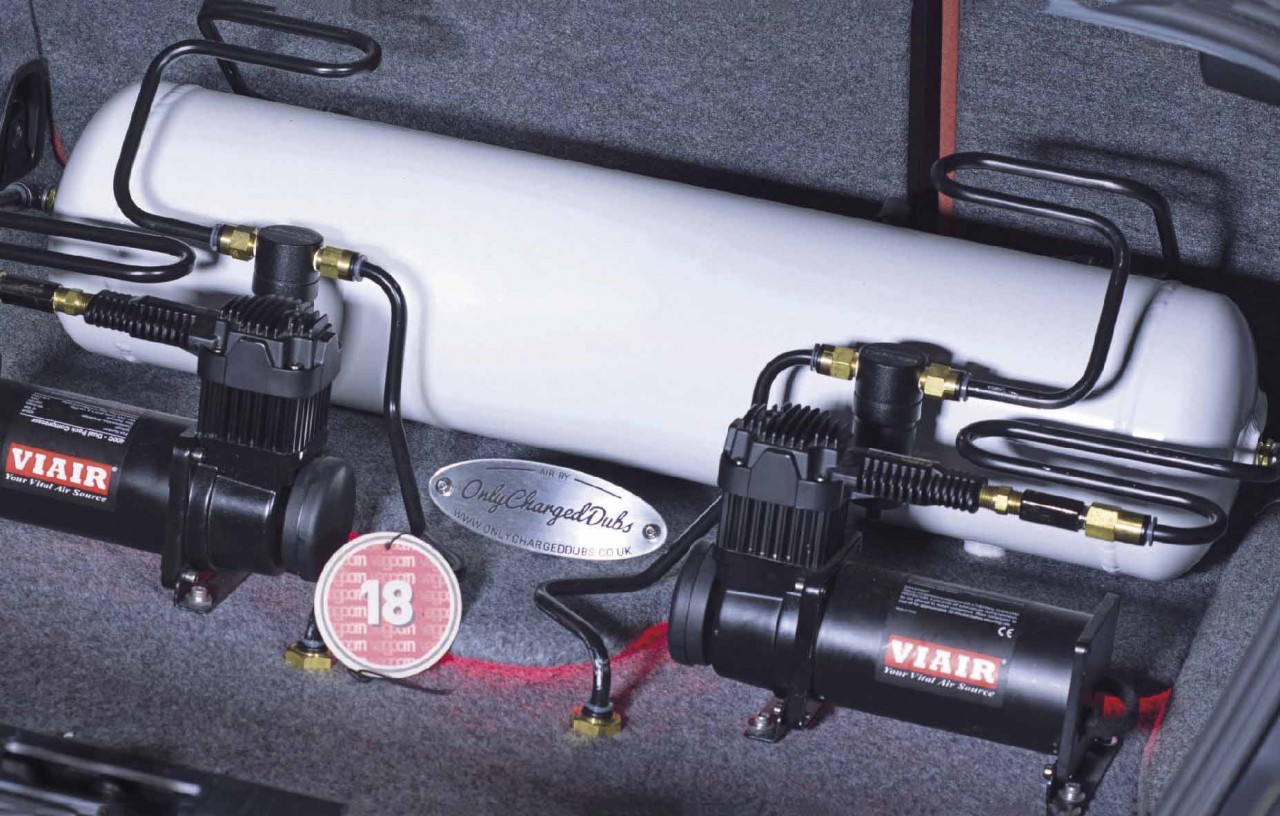 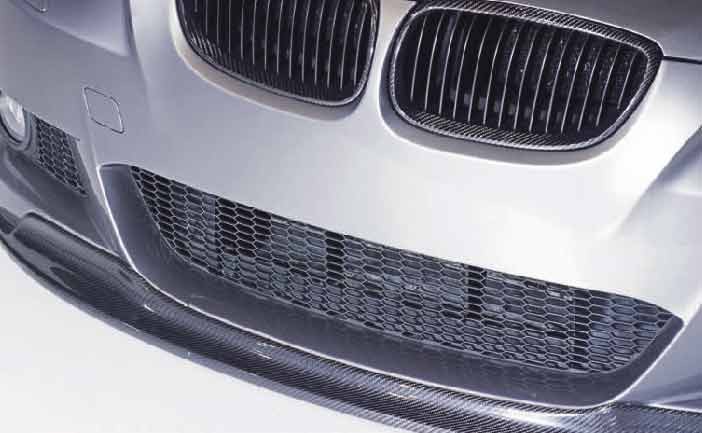 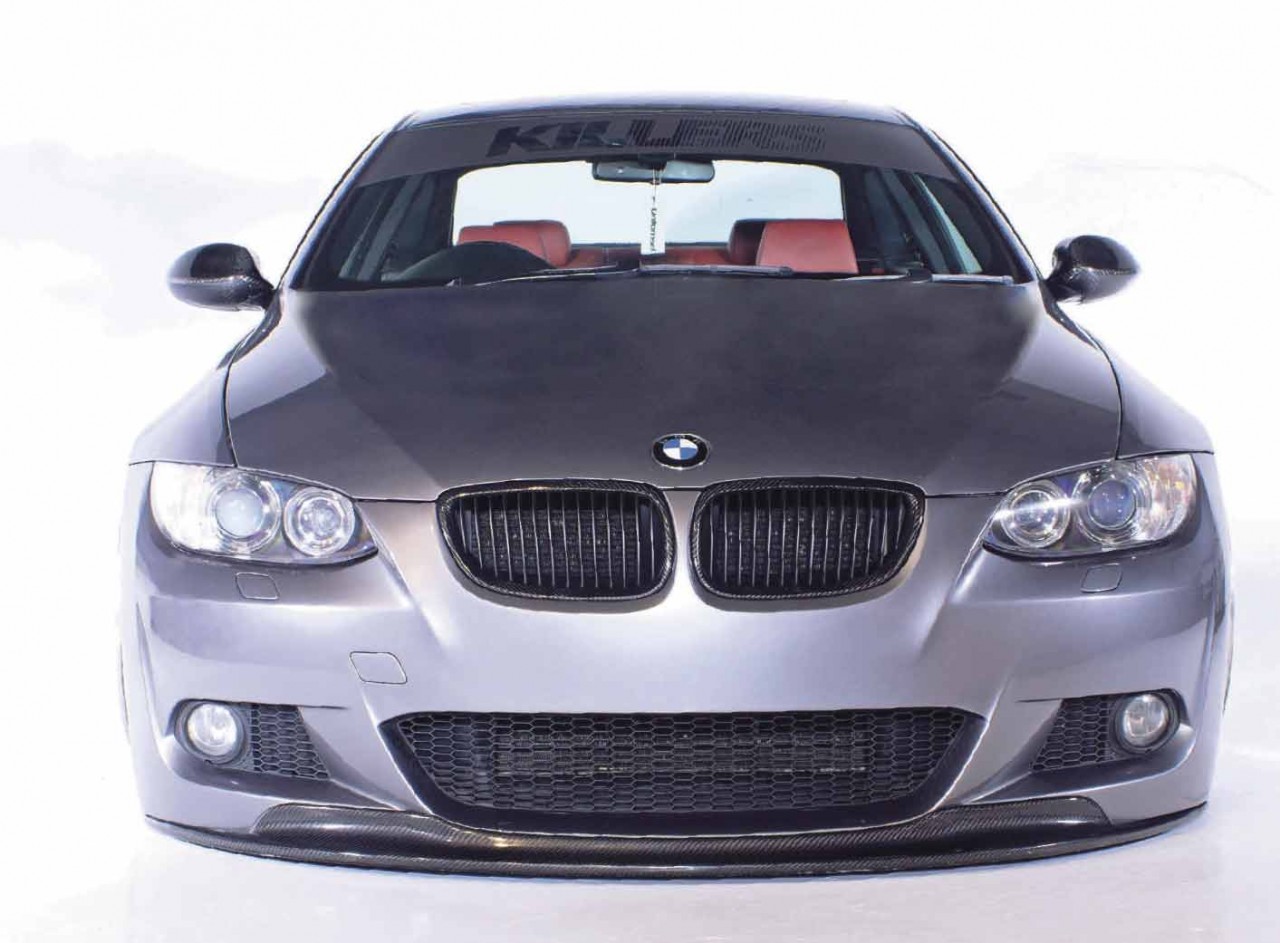 “The 325i rolled into Doncaster suspension specialist Only Charged Dubs as a standard BMW and rolled out a tarmac-toucher. It’s all thanks to full air suspension, using Air Dynamics performance struts and air bags”