If there’s one thing we can probably all agree on in life, it’s that quite often, you really should just get on with things instead of being left thinking ‘what if?’ all the time. It’s why you’ll find that those who spontaneously pack it all in to go travelling around the world or conquer their phobias to become a seasoned deep-sea diver are the ones that always seem to have the biggest smiles on their satisfied faces. 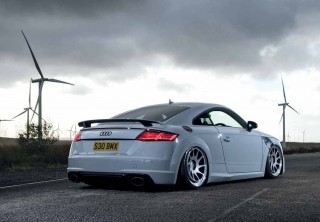 It’s an attitude refreshingly found in spades from the owner of this stunning TTRS, Steve here – a young man who’s successfully used this positive mindset to his advantage when it comes to his colourful car history. He might only be in his mid-twenties, but he’s already owned some pretty tasty metal in his time, not least his previous project car – an 8V S3 saloon that graced the very pages of a previous issue of this fine publication thanks to some serious tuning work and a killer show-car aesthetic.

Gaining a reputation on social media and in national tuning circles for being someone that certainly doesn’t mess about when it comes to modifying his rides, it’s fair to say Steve had his work cut out when it was time to swap up the beloved S3 for something even more special. “Giving up on something that had 500bhp made things more difficult as I love a powerful car and therefore needed something with plenty of potential,” he explains.

After plenty of deliberation, Steve’s radio silence was finally broken when he eventually revealed the S3’s replacement to his thousands of Insta-pals. And it certainly didn’t disappoint. “I like the older-shape TTs but the Mk3 shape absolutely nails it in my eyes – it’s basically a mini R8!” he grins as he shows us around the car picked up only a few months back – this super-sharp Nardo-grey coupé that was snapped up from a dealer in York when it boasted just 1000 miles on its Digital Cockpit-based odometer.

When asked what their initial intentions were with their modified rides, the majority of owners explain how the tweaks came as something of a surprise and gradually over a long timeframe, but as you’ve probably gathered by now, Steve certainly wasn’t letting anything stop him from going all-out with this pristine new car from the word go. “It had its air suspension on within three days of me owning it,” he modestly reveals – touching on one of the most crucial points of the entire build so far.

“The power is without a doubt my favourite part of the car already, the way it delivers it gives you a serious punch!

It’s undoubtedly one of the first of its kind to be rocking such a system in the country, if not the world; now boasting range-topping Air Lift Performance struts and a digital 3H management system that allows it to switch between several vastly different ride heights in a matter of seconds. Certainly a controversial move that might seem confusing to the more die-hard sports car fanatics out there, but Steve is no stranger to air and knows that with a little respect and patience during set-up, it really can offer the best of both worlds…

“Air suspension is always going to cause debates between people and that will never change,” he ponders. “I’ve run air on my cars for eight years now and can tell you that if you spend time setting up things like your strut length and damping settings properly, it will handle just as well as any coilover setup.” After a couple of days lying on the floor tinkering with the finer details, Steve’s proud to reveal that he’s now over the moon with the way the car performs when he’s pushing on in it – no mean feat considering these puppies perform so well in standard trim!

Like a rapper’s trainer collection, another secret to Steve’s success has always been keeping people on their toes when it comes to switching up the choice of rims as frequently as possible. As we caught him for this photo shoot, the car was rocking its first quartet of aftermarket hoops in the shape of some sumptuous 20in Rotiform OZT splits – looking extremely naughty against that body-drop and serving up an incredible aesthetic that’s gone down extremely well at the various shows he’s attended recently. “I’ll keep changing the wheels up to keep it fresh; I’ll probably buy another set of splits over the winter for next year…”

Aside from a smattering of carbon fibre and converting all badging to gloss black, the Nardo Grey exterior effortlessly ticks all the boxes in its near-standard trim. But Steve’s been keeping himself busy elsewhere on the car, like with the goings-on under that bonnet. Boasting nigh-on 400bhp as stock, the recently-revised 2.5-litre TFSI ‘EVO’ engine is nothing short of a work of art from the factory. But following the recent cracking of the ECU by American tuning powerhouse APR, who promptly release a savage Stage 1 map, Steve had to be one of the first to get in on the action.

“It’s got 503bhp now and the power is without a doubt my favourite part of the car already, the way it delivers it gives you a serious punch!” he says with a glimmer in his eye, keen to ensure no matter how show-focused his cars may look, they must always have the grunt to match the looks and not become something of a one-trick pony. Also boasting one of Eventuri’s beautifully-crafted carbon fibre intakes, a Forge Motorsport intercooler and full Milltek exhaust system, it’s clear that Steve is fond of a B-road blast as much as the next man.

“It’s actually my daily as it’s the only car I own,” he refreshingly reveals, explaining how it remains remarkably comfortable and capable when required and meaning it’s surprisingly something of the perfect all-rounder.

Steve’s spearheading a refreshing new way to build show cars – one that stems from the instant-gratification iPhone generation that likes nothing less than spending long periods of time waiting for things to happen. With his project coming together as rapidly as his car now goes when booted, it’s amazing at what’s been achieved so far, especially when you remind yourself he’s only had the car in his possession for a matter of months. Just imagine where it might be in a couple of years…

THANKS Becca, my other half, as well as my parents for dealing with my hissy fits when stuff goes wrong!

The ‘less-is-more’ approach that’s effectively been applied to the rest of the car also continues into Steve’s black leather cabin. No one would deny that the TTRS’ interior is something of a work of art from the factory, meaning our proud owner was left with the task of adding some small touches here and there to merely enhance the awesomness.

This has been achieved with a custom carbon fibre steering wheel that’s based on the stock car’s dimensions – one of the most stunning part of the entire build that we imagine is nothing but a pleasure to come in contact with on a day-to-day basis. The carbon fibre theme continues with some comprehensive seat backs, that’re topped of with a recently-installed rear roll cage to bring more of a clubsport vibe to the table. 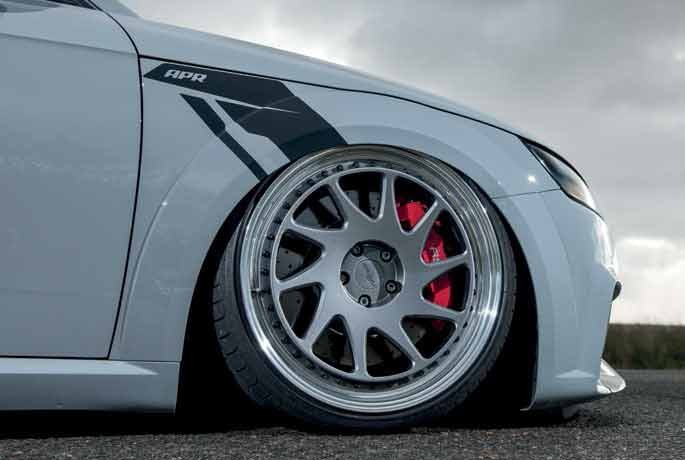 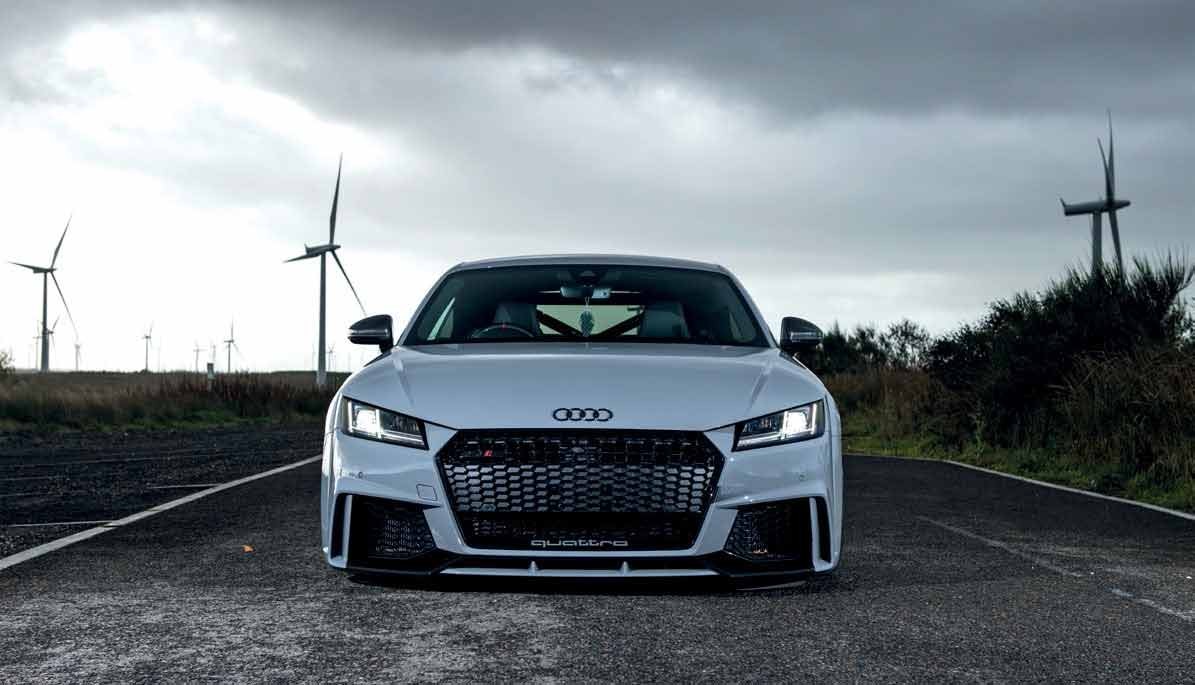 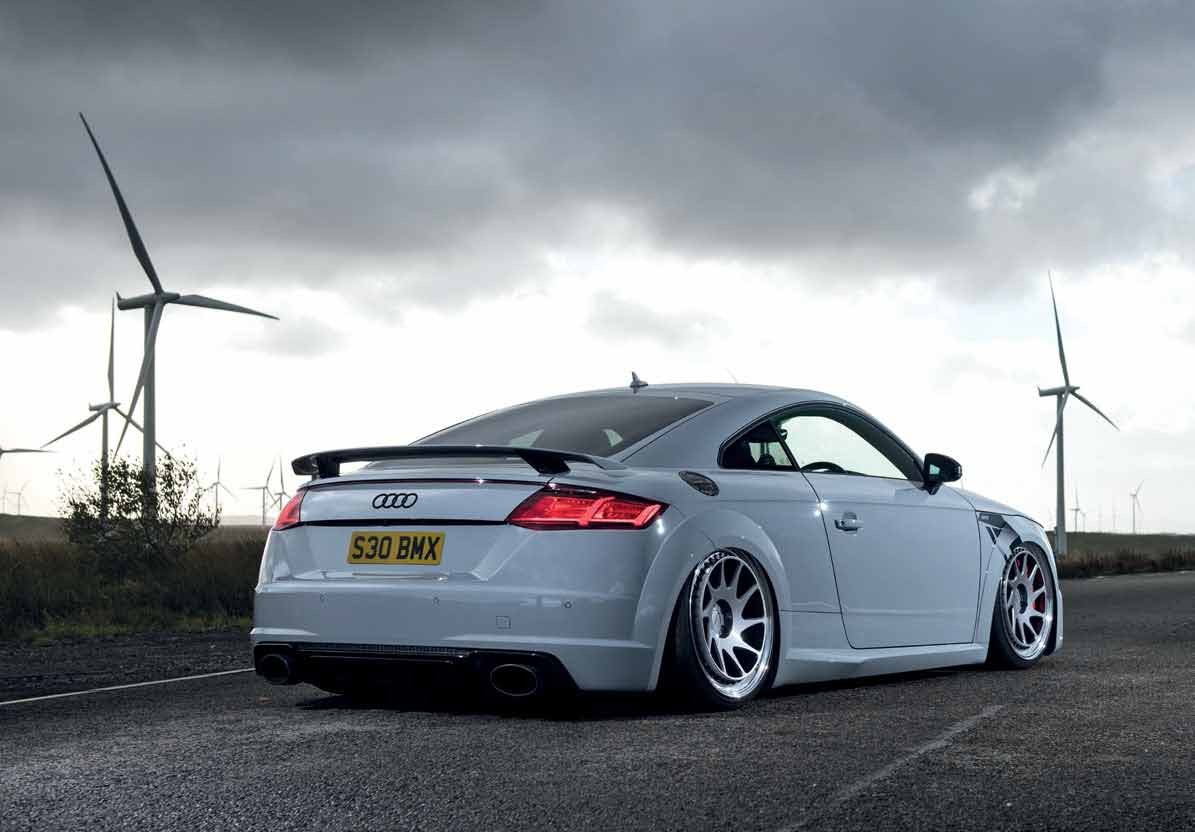 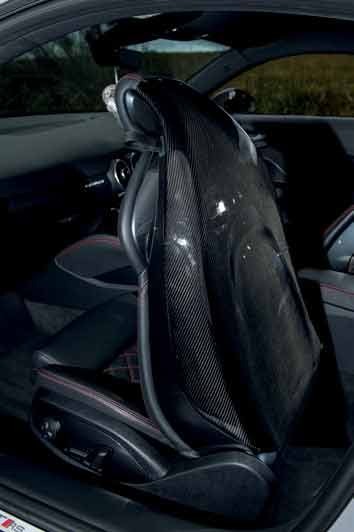 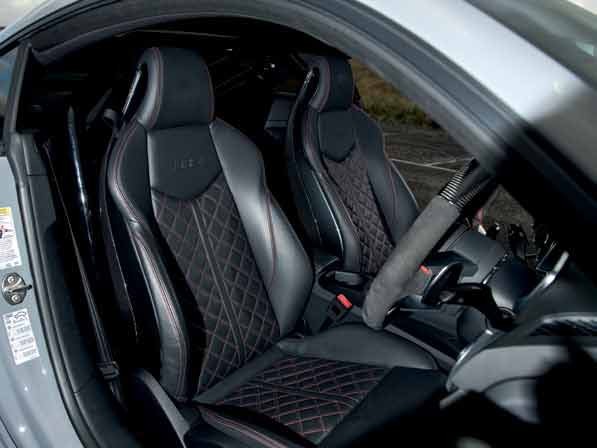 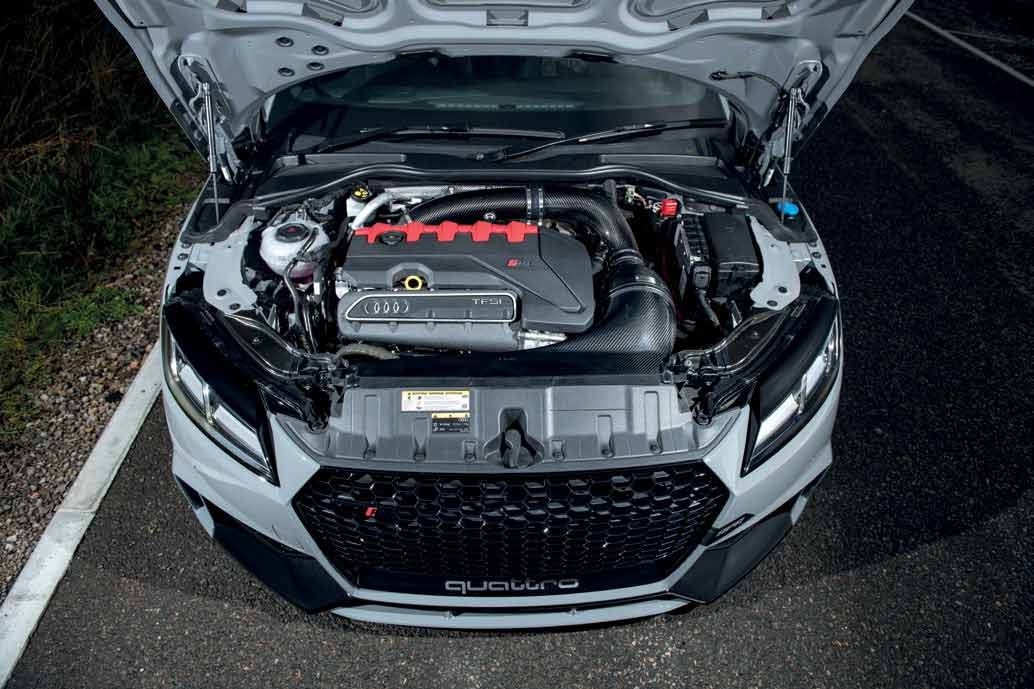 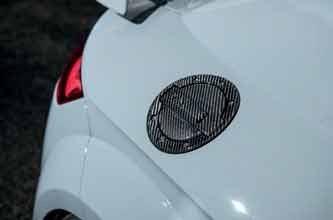 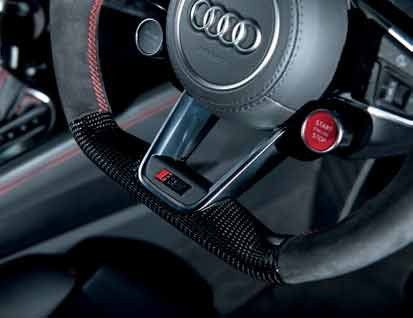 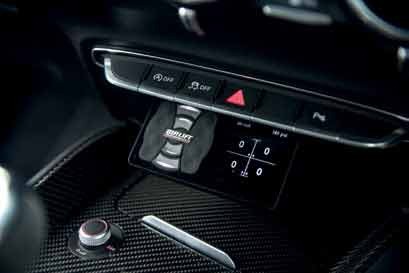 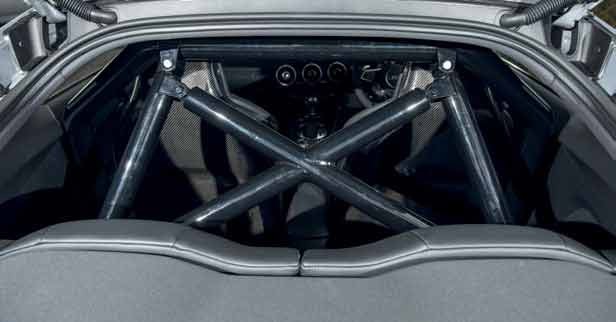 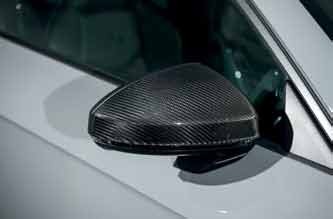 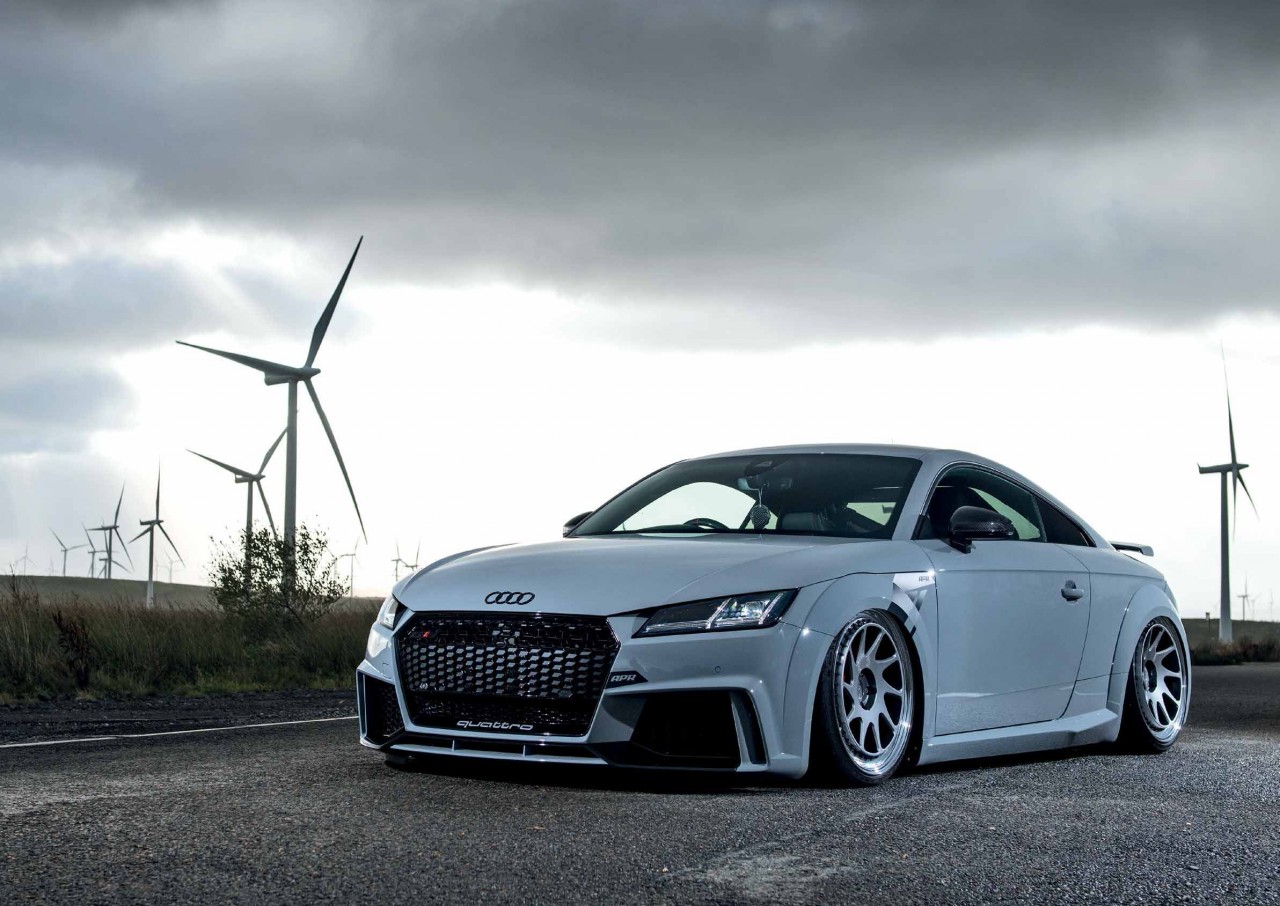 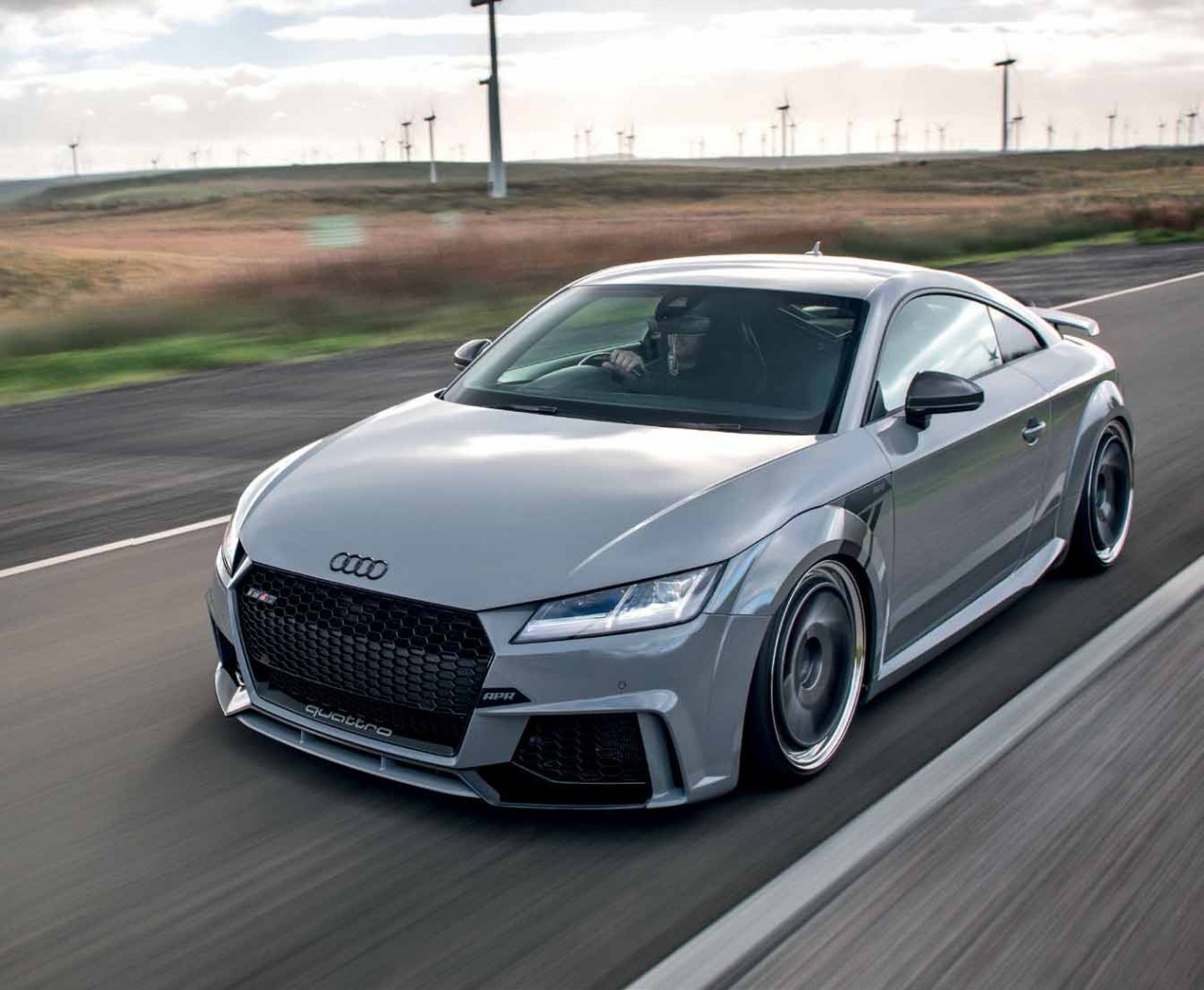 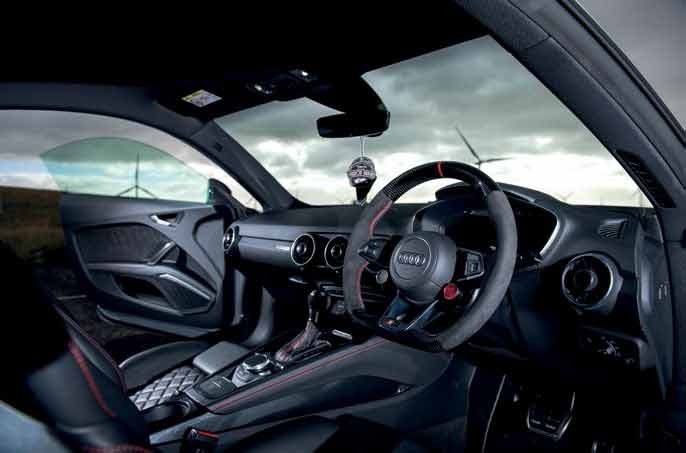 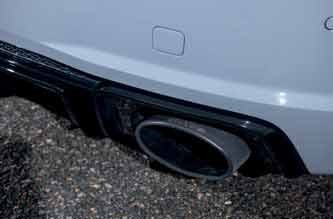 “I love a powerful car and therefore needed something with plenty of potential,”