Germany might not be the first country that springs to mind when you think of rock ’n’ roll, as an infamous exchange from High Fidelity neatly summarises: “You wouldn’t be familiar with our immediate influences, they’re mostly German.” “Kraftwerk? Falco? Hasselhoff?” 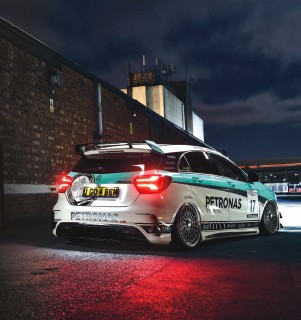 Nevertheless, they’ve had their musical moments as a nation. Who doesn’t like a bit of Can, Faust, or Die Toten Hosen? The spirit of screaming rebellion is there. You’ve just got to look beyond all of the lederhosen, foaming steins, huge suspicious sausages, and unnecessary racial stereotypes.

The Bundesrepublik’s prolific guitar-band heritage directly feeds into countless areas of popular culture, not least the design and manufacture of automobiles. So let’s shoehorn in a painfully stretched ‘what if’ here, and imagine that the Mercedes-Benz showroom line-up were a rock band. What would fulfil each role? Well, you’d have to have the G-Wagen on bass for starters; bass players are rugged and hardcore. The CLS350 Shooting Brake would be the drummer – it’s a bit naughty, but also very practical. Guitarist? That’d be the GLA45 AMG, simultaneously deranged and precise, and unashamedly larger than life. And the frontman? You’re looking at it right here across these very pages – the crowdsurfing mentalist that is the A45 AMG W176.

Every credible band needs a wild, noisy lunatic at the front of the stage, and the shouty A45 fulfils this role with gusto. If you haven’t driven one of these yet, there’s something that you really need to add to your automotive bucket list: full-bore flatshifting one of these in a tunnel. The whipcrack explosions from the spangly tailpipes sound like you’re being strafed by Spitfires. Spitfires with whips. It’s hilarious.

The A45 really is beautifully antisocial. It’s Johnny Rotten. It’s GG Allin. It waves two fingers at the traditional concept of the hot hatch. Whereas the bloodline of the original Golf and 205 GTIs, and of course their numerous brethren, may have somewhat transmuted over the years from ‘sensible car that’s quite quick’ to ‘quick car that happens to be quite sensible’, the A45 AMG takes the concept of the 21st-century hot hatch to an absurd and extreme caricature. It has somewhere in the region of 380bhp in factory-standard form – the same as an early Lamborghini Countach – from a four-cylinder motor. That’s a pretty rock ’n’ roll hatchback. It’s all about hedonistic excess.

The Petronas-liveried car you see here, lovingly curated by Ben Walker, is currently working its way through an inevitable chapter of every frontman’s story: the part where they’ve burnt themselves out in a narcotic haze after countless months on the tour bus, been in and out of rehab, and opted to reinvent themselves as a cleanliving, straight-edge upstanding citizen. Bourbon and smack make way for quinoa and artisan mineral water. Sport and healthiness suddenly become paramount.

So what better icon for a recovering AMG to aspire to than the long-standing association with the Malaysian oil conglomerate Petronas? This is a name that’s been slathered over the Mercedes Formula One team’s race cars since the 2010 season, and Lewis Hamilton certainly seems to be doing all right under those colours. It ticks a lot of boxes.

This is an interesting manoeuvre for Ben. The trajectory of his automotive adventures essentially being a short flat line followed by a long and steeply raked one. His first car was a bone-stock VW Fox, but by the time he was on his third car he was bolting hydraulic suspension to his Mk7 Fiesta Zetec S, winning the show and shine at Ford Fair and sitting proudly on our very own stand at TRAX. Following that came a 2015 Scirocco, running 370bhp and air-ride and swallowing up about £15k in mods. It’s fair to say that, by this stage, he was very much one of us. So why the shift from Wolfsburg to Stuttgart?

“I quickly become bored and unhappy with the Scirocco,” reasons Ben. “An overpowered FWD car is all good fun, until it rains. So I started to strip the Scirocco and at the same time look for its replacement – which ended up being the A45. I think compared to its rivals like the Audi RS3, Ford Focus RS and VW Golf R, it’s a much more exciting car all round, as well as being something that isn’t modified by many people.”

With a clear plan of attack, the A45 was purchased in February 2018 from Mercedes Approved, Teesside – a completely standard facelift example, bristling with exciting additions from the options list including the AMG Performance exhaust, aero kit and panoramic roof. And impressively, the mods were getting mapped out way before the keys were in his hand; in fact, three months before he’d even found the car, Ben had bought the 19-inch Rotiform LAS-R wheels and the suspension setup, which consists of AirREX struts and bags along with Air Lift Performance 3P management. The man knows what he wants.

“The wheels then had to be machined to fi t, which was done by Fix A Wheel,” says Ben. “When I came to fit the suspension, the rear initially sat much higher than the front, and I was sure that if the bags were manufactured differently the car would go much lower. I contacted Indy at The Performance Company, and within a couple of weeks I was sent a pair of redeveloped rear bags, free of charge, which made the car sit perfectly all round.”

One of our favourite elements of the A45 AMG W176 is the optional AMG Performance exhaust, as it makes some pretty incredible noises. But although Ben’s car came with this option box ticked, it was one of the first things he unbolted. He had sound reasoning, however: “I’ve always had Milltek exhausts, and their A45 AMG system is next-level,” he grins. “MG Auto Motorsport fitted my decat downpipe and non-resonated, valved cat-back, and the car is equipped with Milltek’s Active Valve Control – a Bluetooth app that lets you control it and override the standard valve settings on the A45.” How cool is that? The car doesn’t sound so much like a strafing Spitfire these days as a Led Zeppelin drum solo, in a colossal stadium, with your head between two Marshall stacks. It’s insane, frankly. Proper recipe for tinnitus.

“Forge Motorsport have pretty much taken care of the performance side of the build,” Ben continues. “The A45 has the Stage 2 remap, side-mount charge-cooler, centre charge-cooler, air intake, blow-off valve, strut brace, under-chassis brace kit, and the new oil catch can, which was developed on my car. They fitted everything – and it’s now pushing out 440bhp.”

Yeah, you can’t really argue with that, can you? A hot hatch running the sort of horsepower that was once the sole preserve of supercars, along with high-end footwear and the kind of suspension that makes it look devastatingly aggressive on the showground as well as providing ultimate control on fast-road and track driving. This angry little Merc rocks on every conceivable strata. But the thing that really pushes it above and beyond is that unique and eye-catching wrap.

“The design is based on the Petronas Mercedes Formula One cars, along with a British GT style livery,” he explains. “I designed it myself, using Forza Horizon and Photoshop, then the graphics were cut on my plotter, and fitted with help from my missus and my dad.” It’s an offbeat route to creating a custom wrap and the flawless execution is mirrored by the quality of the design – it’s a world apart from the artfully dishevelled race-wrap that featured on our cover last month. But it’s every bit as enticing. This wrap, combined with the gleaming wheels and on-point stance, is what’s gained Ben entry into every prestigious show hall across the 2018 season. But don’t go thinking it’s a one-trick show-pony. This thing gets used and used hard.

“I own a van and drive that for work, but I use this car for everything else,” he assures us. “It’s bad on fuel, so pretty expensive to run, but worth every penny as it’s such an exciting car to be in! I went to Wörthersee, Austria, in this car, where it was driven just like any AMG car is built to do, and on the autobahn it got to 166mph – and that was before it was remapped. And it excelled on the twisty-turny roads of the Nassfeld Pass. I also took the car on track at Castle Combe at the Forge Action Day, and again the A45 was pushed to its very limits.”

This shouty little rock star is a long way from Ben’s roots in that budget VW Fox, and he’s already pondering the future of the build: option one is to ramp up the power, throw in a load of carbon and make the engine bay all pretty, while option two is to swap the bags for a static H&R setup along with some OZ Racing wheels.

This is a frantic little car with a constantly changing outlook; it’s a Jimi Hendrix solo with a Matt Freeman bassline, with Travis Barker on drums and Bon Scott yelling at anyone who comes near. Forget Falco and Hasselhoff, this thing rocks on a whole other level.

“The design is based on the Petronas Mercedes Formula One cars, plus a British GT-style livery” 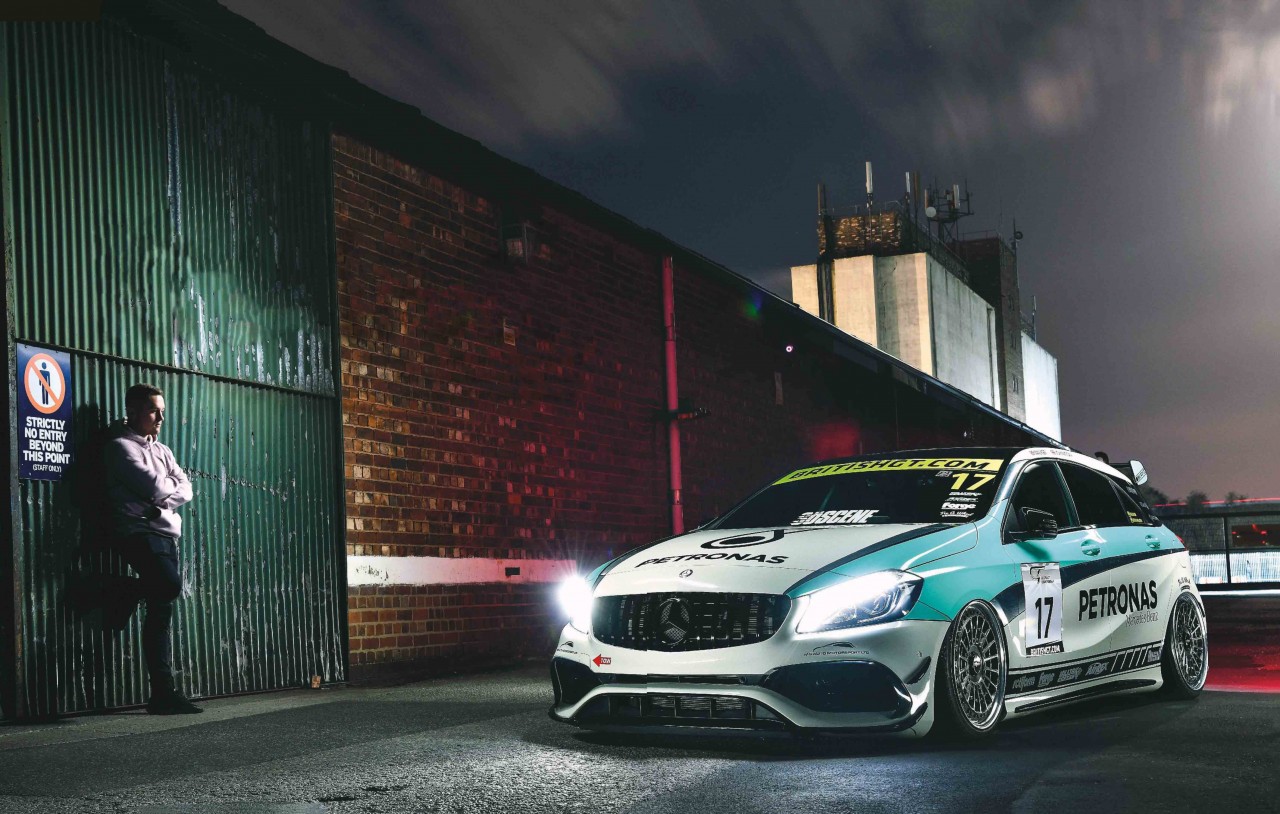 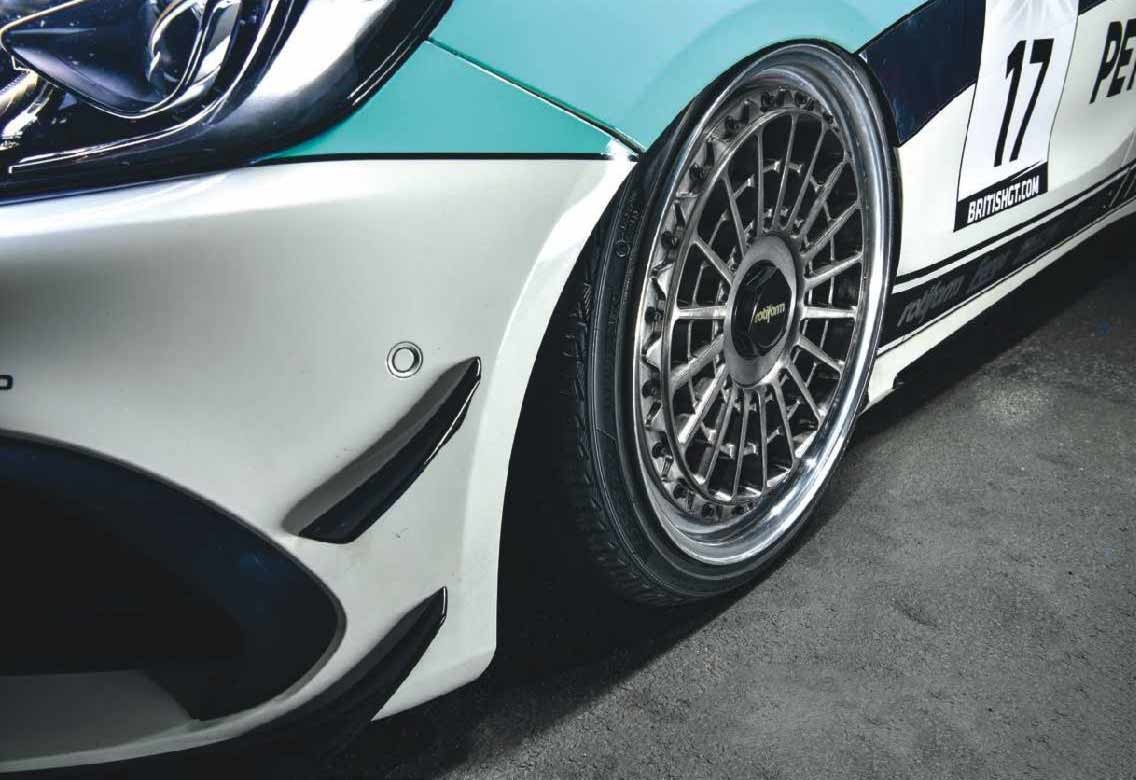 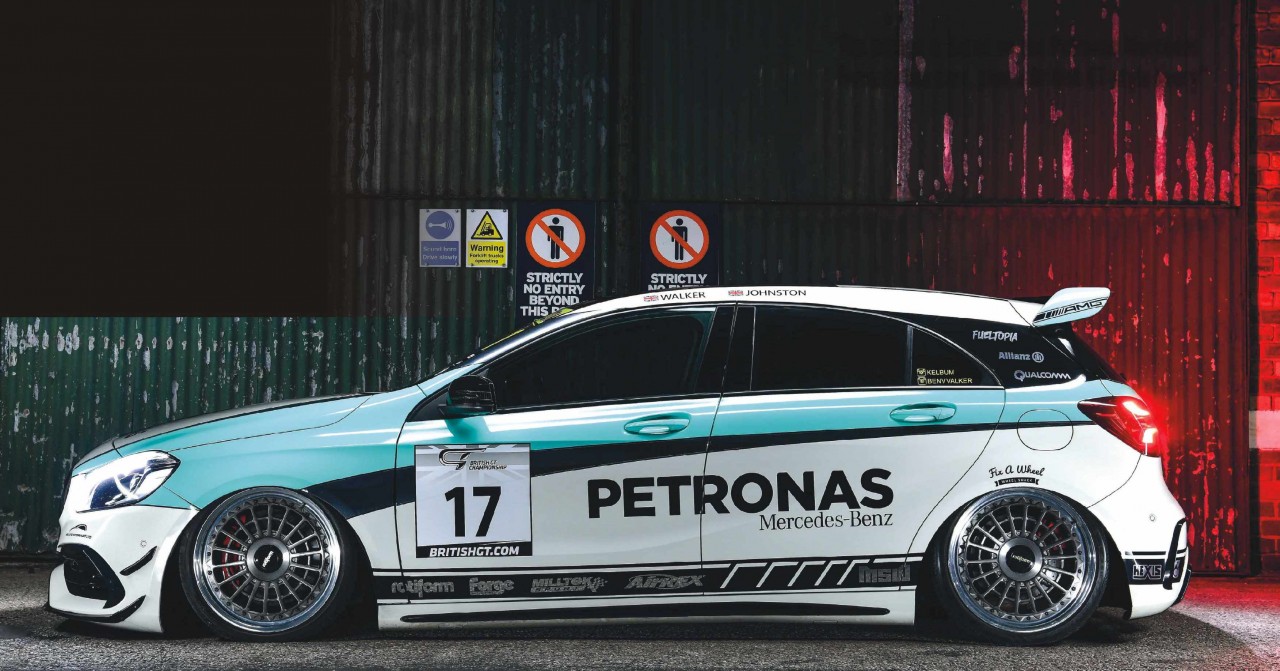 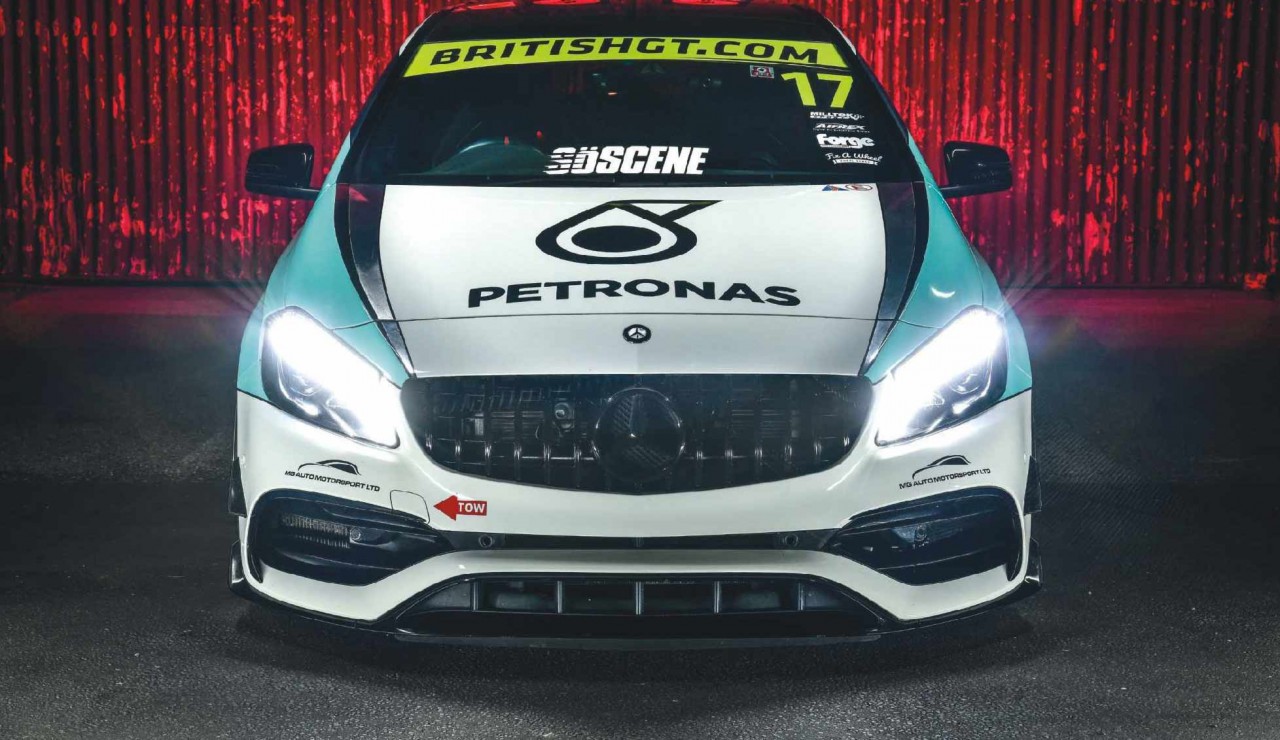 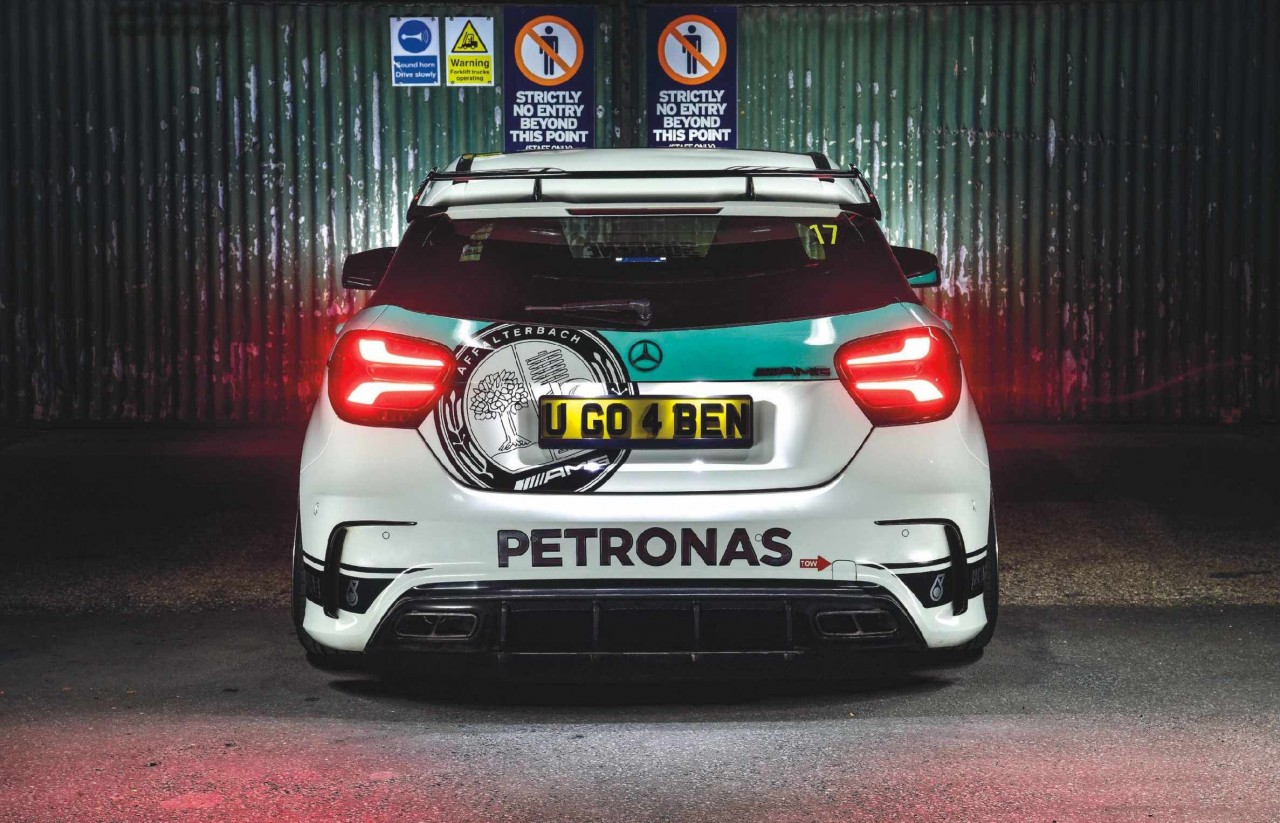 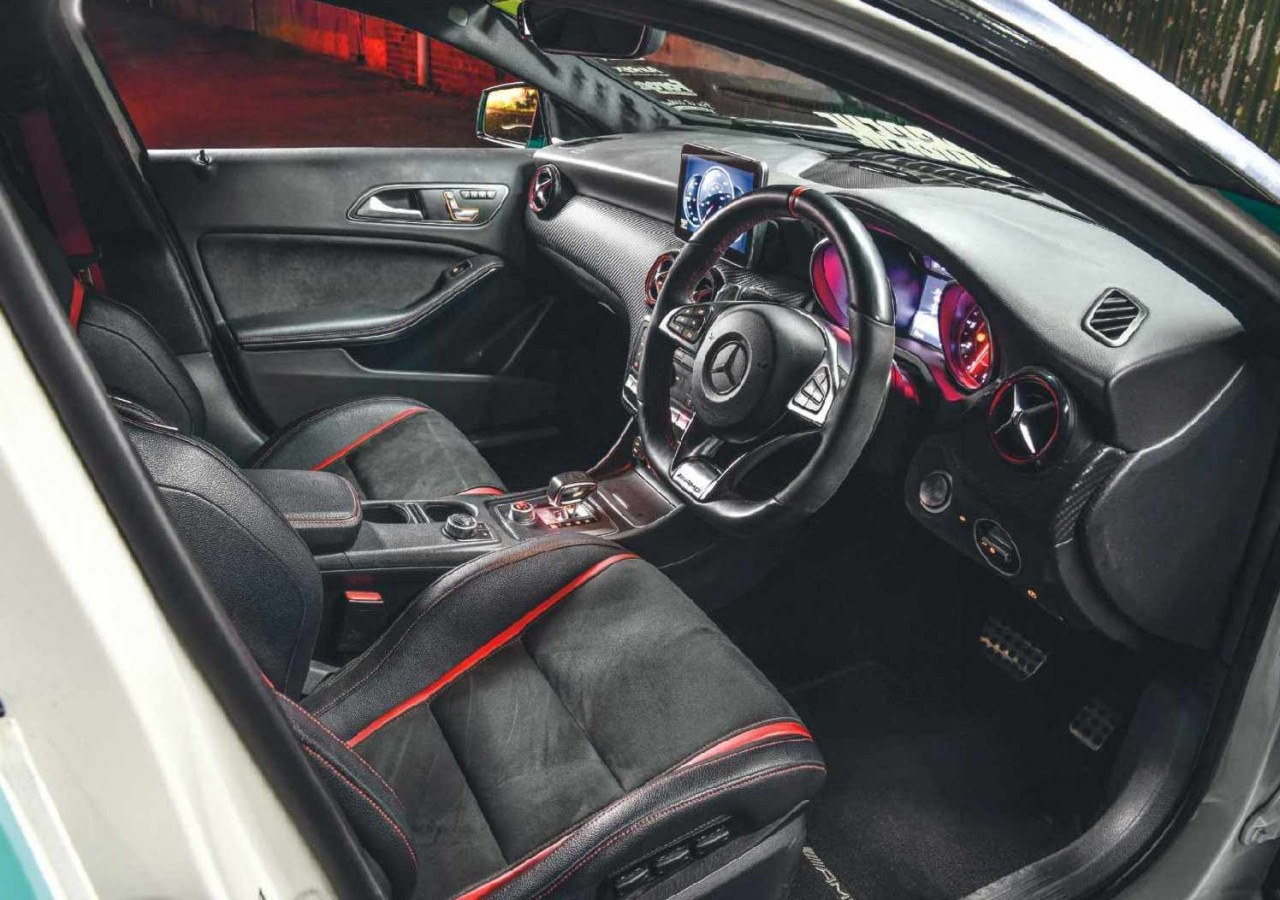 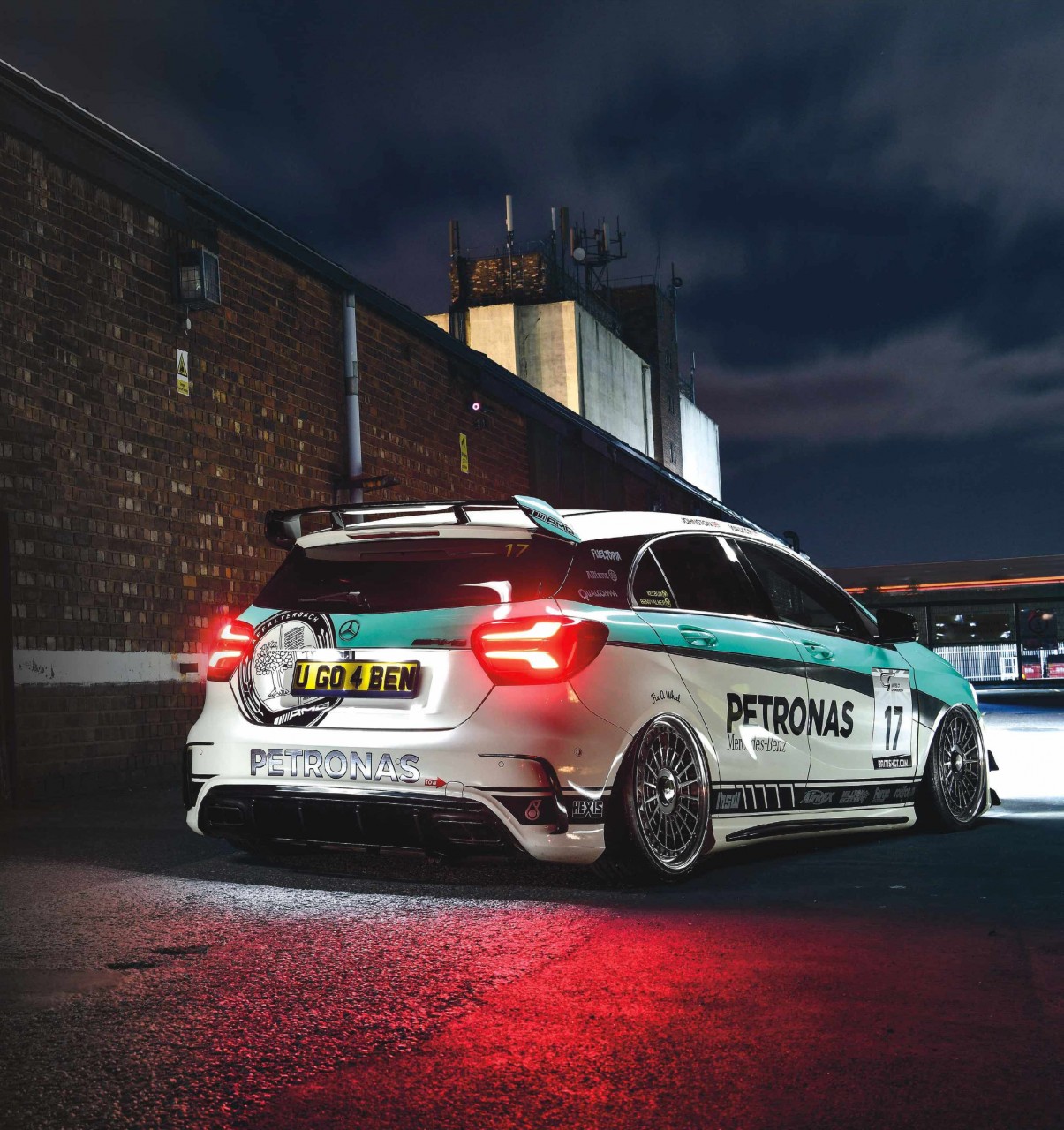 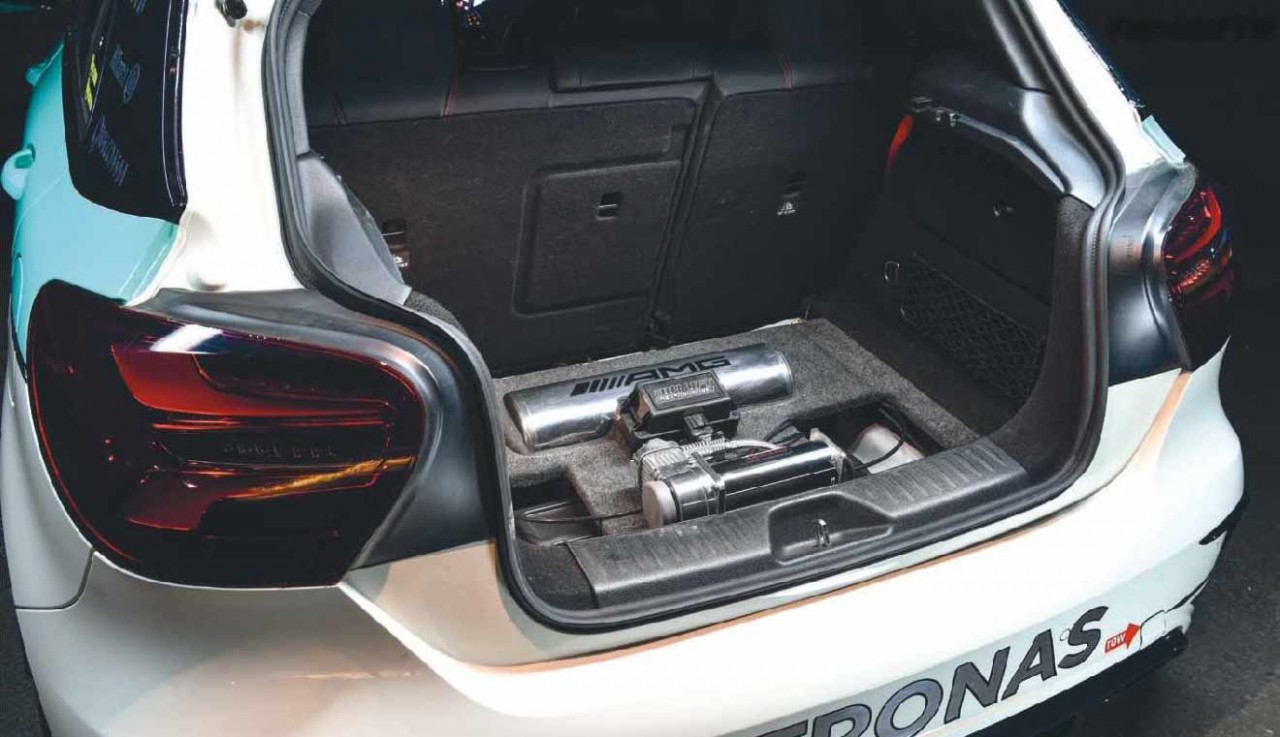 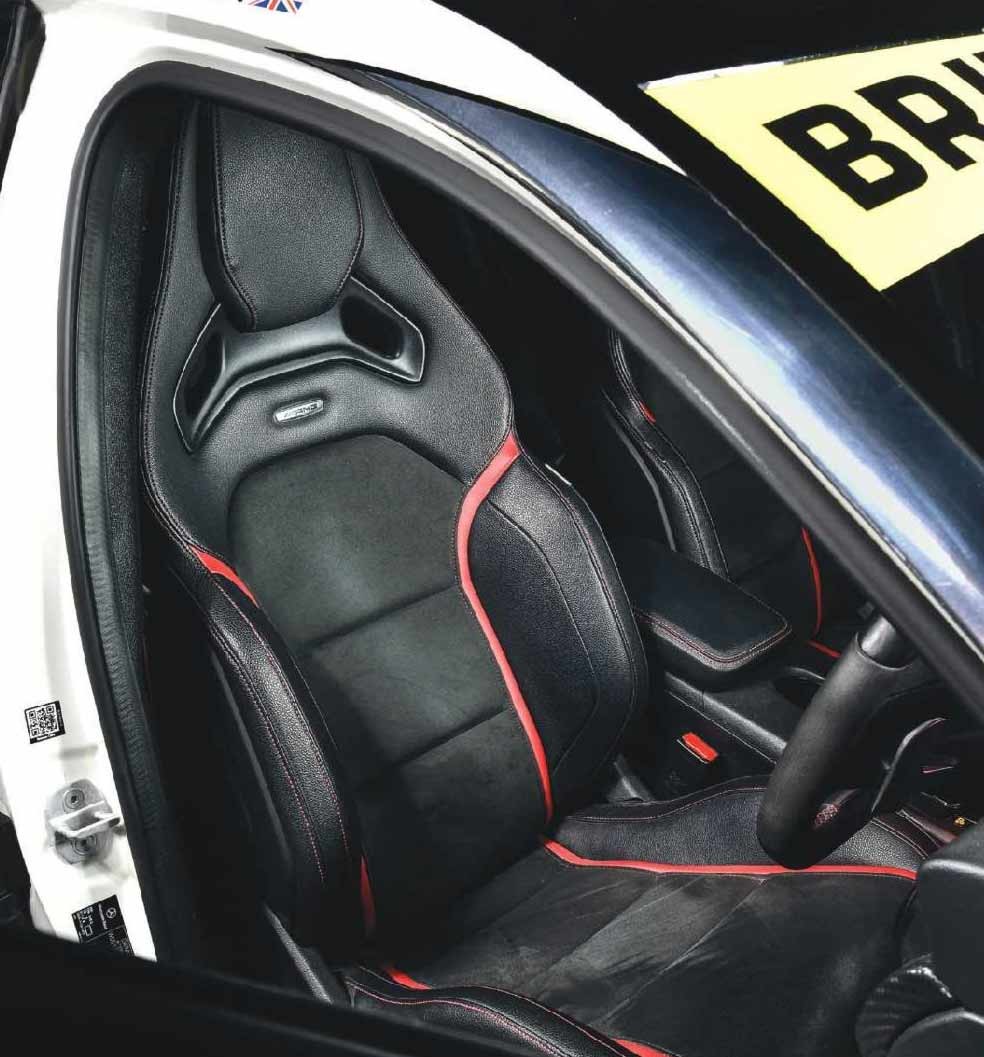 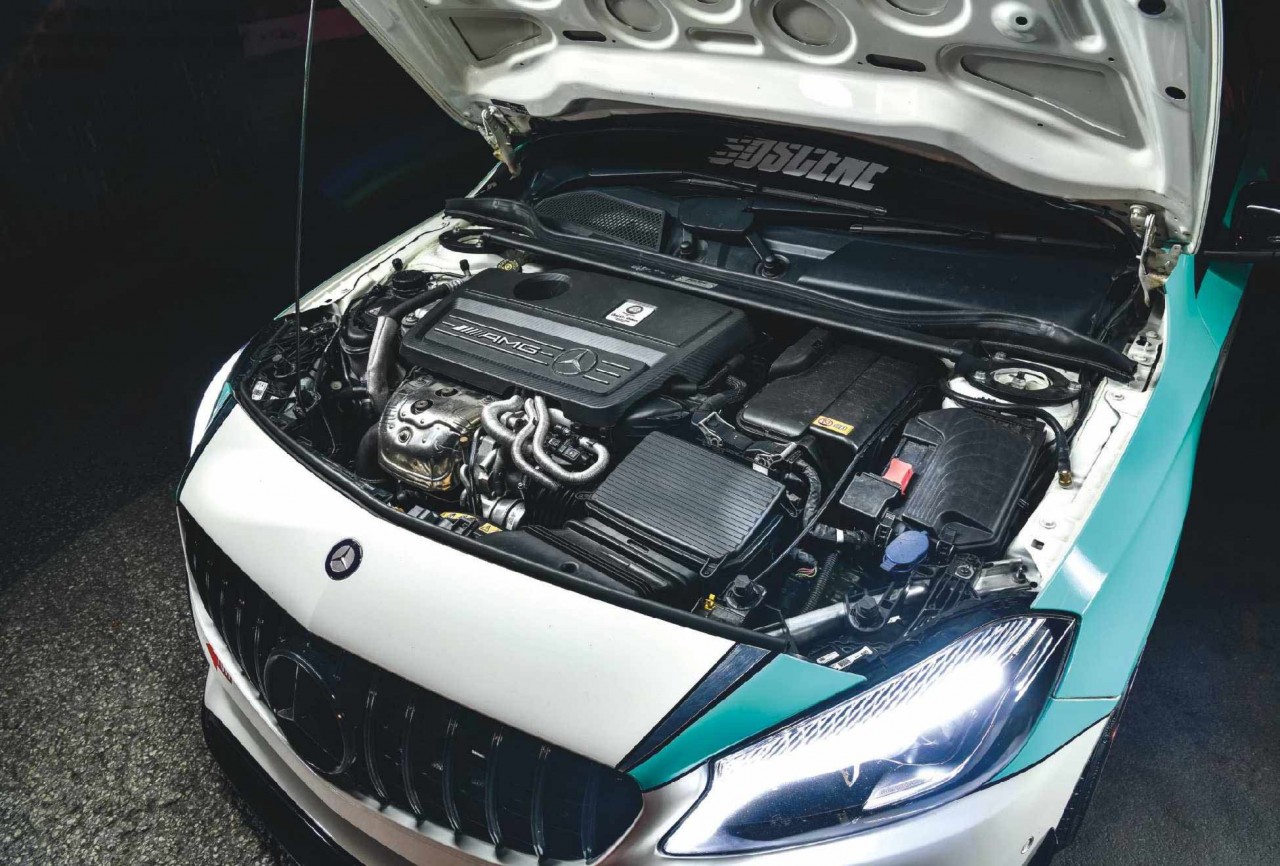 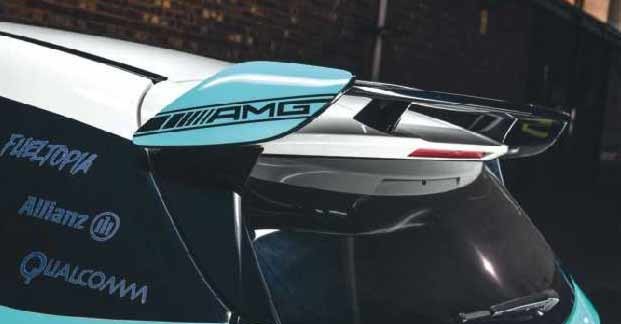