“W124s are famed for their ability to provide years of outstanding service.”

Mercedes-Benz’s W124 series spanned a lengthy production run from 1985 to 1997 and is still to this day the most prolific passenger model from Stuttgart, with a phenomenal 2.7 million examples produced. 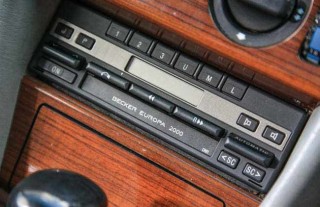 Production across individual engine variants was fairly evenly spread, reflecting the W124’s appeal to a wide range of clientele. For those seeking six cylinder smoothness with the durability and economy of a diesel, the 300D saloon was the model of choice. 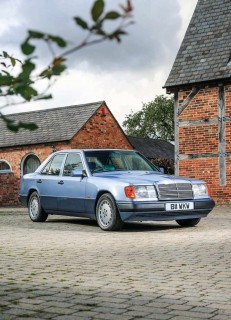 Given the longevity of the W124 range, the majority of the 2.7-million examples produced wear their scars well and are famed for their ability to provide years of outstanding service even to the present day. First launched in 1985 and running in European markets until 1997, the W124 was the E Class version of Mercedes’ modular line which began in 1982 with the W201 190E series. Bruno Sacco’s inﬂuence meant the models were big on aerodynamics and the W124 in 200 base form famously quoted a drag coefﬁcient of 0.29 which was class-leading for its time.

A big departure from the chrome bumper W123 it replaced, the W124 was the “pivot” unit of the Mercedes passenger car range, with the largest range of engines ever offered on a Benz product to this day.

Expensive cars in their own right, a 300D saloon such as the type owned by Adams would have cost as much as £60,000 if ordered in overseas markets such as Australia, where pecuniary import duties made these vehicles almost exotic.

However a degree of cynicism has crept into the classic car market for cars of this type in recent years. Older than 20 years but not quite 30 in most cases, they have slipped into the “grey zone” of vehicles which are not quite recognised classics in some people’s eyes, but are no longer seen as reliable daily drivers in others’.

Inevitably this has led to claims that the W124 is not worth restoring given resale prices are affected by this trend, and some claim the cars’ original glamour can never be recaptured once the miles have taken their toll.

This car will make them think again. Adam Adams’ W124 300D has been described as among the best available. Guess the mileage? Well, that question was put to our photographer. His guess: 20,000. But a quick check of its MoT history reveals this car has passed its last 11 consecutive MoTs without any advisories. That same online check also reveals this car’s biggest secret: 309,000 miles. Used every day without fear or favour, this is an ideal demonstration of what Mercedes were capable of building in their heyday and the message is clear: find a good example now, improve and stick with it: this could be your car in a few years’ time. 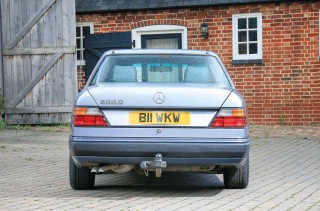 Adams is surprisingly upbeat about the restoration costs also. “I basically sent the car to my engineer to arrange paint and panel and do whatever needed doing. It was sort of carte-blanche in that I didn’t want to have to approve every bolt, washer and nut so I told him to get on with it basically. The end result was a decent bill but certainly not the down payment on a new Lexus, let’s put it that way.”

Amortised over the course of anticipated future use this car could turn out to be the best value on the road today. And with 4x electric windows, electric sunroof, leather upholstery and cruise control, it’s hardly spartan in terms of equipment. Refi nished alloy road wheels and brand new tyres encourage the viewer to double check the mileage. Could this be the first ever car to be clocked forward?

Adams laughs, “I hadn’t considered that! No, that wasn’t a part of the restoration. Actually, it is sort of a badge of honour but not one that is more important to me than the car itself.”

This attitude to mileage is refreshing in an environment increasingly dominated by an obsession with sub-100,000 mile examples, irrespective of condition or price. We now live in a post-5 digit odometer world, where scrutiny of distance travelled is at a fever pitch, driven by finance deals and mileage surcharges. This obsession also affects classics, even those which have been restored. 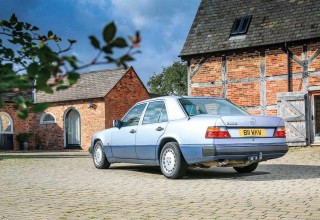 “Mileage has never been the motivating factor behind any of my purchases” says Adams, who is a serial collector of automobiles from the 1950s through to the 1990s. “I look for soul, condition and above all, whether I like the concept and what the vehicle does. I consider myself a saloon car man – those are the proper automobiles”.

In order to keep his pride and joy in tip-top condition, and inspired by stories of Greek taxi drivers and their millionmile diesels, Adam has invested in this car with both courage and conviction. Items he has attended to over the years include new head gasket, valve stem seals and piston rings, meaning the engine runs quietly and smoothly and is in fact hard to determine as a diesel with the bonnet closed.

The cooling system has been rebuilt to ensure total reliability and the diesel injection system has also been refreshed, which is an extremely costly procedure but one which results in economy figures nudging 40mpg. For a 3.0 litre powerplant and automatic transmission, that’s impressive indeed. That figure causes one to question why dual clutch transmission are so necessary for fuel conservation given today’s average mid-size passenger saloons barely achieve the same figure in real world use.

Refurbished alloy road wheels really do lift the side profile of the automobile and remind readers of the near limitless selection of options purchasers could select when ordering a W124, which could also be had with aerodynamic plastic wheel trims which were progressively facelifted through the series. 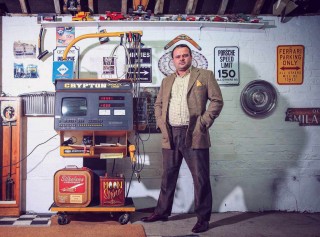 Shrewdly, Adams performed these restoration tasks before component prices begin to hit the roof in the same way they have done for the preceding W123 range. “I was able to source some parts second hand which kept costs down, but Mercedes’ policy of hiking prices for parts serving models no longer in production would probably have put this car’s future in danger had I not acted early with preventative maintenance.

“The car is also a pleasure to work on”, he adds, noting that access within the engine bay is good and that as a model, the W124 is very resistant to corrosion with probably the best factory underseal in the business for its day.

“My only disappointment was Mercedes’ first attempts at waterbased paints, these are not as good as their baked acrylic predecessors – but the car’s interior has that classic hewn-from-the-earth feel, and is probably my favourite part.”

Also in Adams’ collection are an E28 5-series and an absolutely sensational Series I XJ6 4.2, so in this company the W124 earning daily-driver status is a compliment in itself.

“I love the look and feel of the XJ6 but as an everyday prospect the W124 does everything you could ask and then more” says Adams, who proudly shows off the recent repaint. Getting properly into detail, the owner refers to the in-depth requirements of Mercedes’ secondary paint codes, required for these two-tone examples. The equivalent secondary tone for the primary Pearl Blue of this example is 5301 Andor Blue – a challenge for the paint shops. 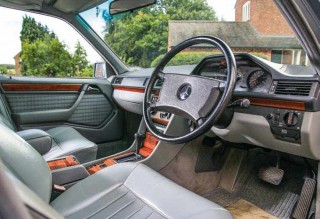 “You can only obtain the colour code from Mercedes’ factory system so that was a challenge, but once obtained it was straightforward” says Adams, who is a seasoned car restorer. His engineering shop is testament to his commitment to classic automobiles and their use on the road, rather than as museum pieces.

“Unlike other forms of collecting – and I am a serial collector – cars are my favourite because you can take them places and engage with people because of them. They are portable.” The collection of tin signs and most notably a mid-1980s Jaguar diagnostic terminal are notable indicators of Adams’ ability to spot quality but also value.

“I saved this fully functional Jaguar diagnostic terminal from the skip a couple of years ago” he says before demonstrating its still-working gauges. “Imagine what else is out there that people miss every day?” This W124 is a timely reminder than there are high mileage, well serviced quality automobiles out there that with the sort of attention Adams has shown, can become just as glamorous, functional and pleasing as this one.

“I fitted the MB-Tex interior as an upgrade but aside from that and the paintwork the car is entirely original and numbers-matching. Everything works, including the cruise control, and it’s very strong to drive, I think it would surprise a lot of people.” It certainly surprised the photographer. 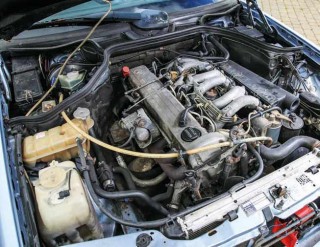 We would love to hear about your high-mileage stunner (or survivor) – email [email protected] to tell us all about it.

Right: Nothing has been overlooked – even the wheels have been refurbished. 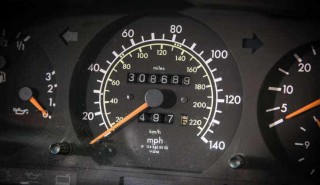 “The W124 does everything you could ask and then more.”