The BMW E32 7 Series is a treat to see in PBMW because it’s a rare beast. The E38 is arguably the most prolific Seven on the scene, though that’s still not saying much as it’s not exactly saturating shows, but the older – and newer – Sevens are a much rarer sight. That the newer stuff is rare isn’t that surprising – the E65 never really found that much love on the scene and so isn’t very well-catered for in terms of mods, and the F01 is still a pretty expensive thing to buy and equally difficult to find parts for. Going the other way it’s a similar story – both the E23 and E32 are rare and values have been creeping up so finding one, let alone a good one, is far from easy and then you are also faced with the problem of what to do with one once you’ve actually bought one. Luckily, they are cars from an age when the modding approach of less is more is most definitely the way forward; they’re elegant, classy and, in fact, slapping all sorts of styling on them is akin to slathering a Michelinstarred meal with gallons of ketchup or brown sauce – it’s just not the done thing.

Case in point, Bono Janssens and his E32 – as you can see, this is a project where the classic Seven’s natural elegance has been allowed to shine through and it’s all the better for it.

While the E32 might have the air of mature businessman about it, Bono is just 23, which makes his attraction to and choice of 7 Series an interesting one as we’d sort of assume that someone in his age bracket would opt for something like an E38 and give it more of a VIP vibe, rather than this devastatingly simple yet elegant setup, so what’s the deal? Well, as far as cars are concerned, the young Belgian mechanic has been into them ever since he came into this world and he’s been into modding them since he started to drive them; “My first car was a 2012 Opel Corsa and I lowered it and put some different rims on it. My second car was an E46 Cab that I lowered on KW V1 coilovers and fitted with Japan Racing wheels and my other current car is an E91 Alpina D3 Touring that I’ve lowered with an Eibach coilover kit,” he says and from this you can see Bono’s modus operandi: buy a BMW, drop it, change the wheels, enjoy and it’s a philosophy that’s certainly served him well with this E32. 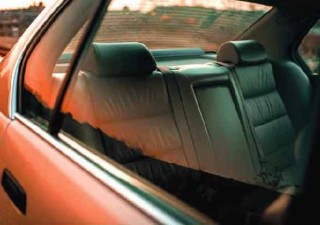 “I chose an E32 7 Series because I liked the classic and luxurious appearance of the car and I find it way too underappreciated by people,” explains Bono and we’re totally with him there. “I had already bought myself a 730i, and a good friend of mine knew someone who also had one so we went to visit him; he owned a garage with his best friend and he gave me a lot of info about his bad-ass 7 series. Unfortunately a couple of months later he died in a car accident. Afterwards I became good friends with the other owner of the garage and he offered me a job at his shop. After six months he asked me if wanted to buy his 7 series, so I sold my one and bought this one,” says Bono. “The car was in a great condition when I bought it; it had almost a full BMW service history and even the original purchase invoice,” he says, making this one E32 that needed to be snapped-up. “The car was already modified but I wanted to add a personal touch and make it the way I liked it the most,” continues Bono and he’s certainly done that.

The first thing on Bono’s list was a set of killer wheels to really bring out the best in the Seven and his chosen set does just that; “I chose a set of BBS RCs because they give a classic appearance,” he says and he’s not wrong. The RCs are also known as Style 5s and are without doubt one of BMW’s most iconic wheel designs, gracing countless models in both single-piece and two-piece form over the years. It’s a timeless, supremely elegant wheel that works well on just about any BMW you might care to mention, especially cars of this sort of vintage. The intricate mesh design is arguably what BBS does best and the RC is a fantastic-looking wheel as standard but, with Bono’s touches, he’s elevated his set to the next level. Perfectly-polished lips are, of course, a must, and the next step was to give the centres a coat of grey paint, just to add a flash of contrast against the Bronzit beige bodywork. Then the centre caps were given rich gold surrounds to tie them in with the gold hardware that Bono has also added, and they look absolutely stunning as a result. They mirror the E32’s classic elegance and also reflect Bono’s individual approach to his E32 and they really were the perfect choice for this 7 Series. 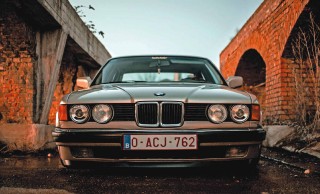 With his Seven sitting on the right wheels Bono and his project were in a good place, but there was more to come as even the nicest wheels alone weren’t going to cut it. The next thing to sort was the ride height and while he has a history of keeping things static, for his luxury cruiser Bono decided air was absolutely the way forward. Trouble is, that’s easier said than done when it comes to a car of this vintage; where modern motors are wonderfully well-catered-for, with countless kits available off-the-shelf, start delving into BMW’s back catalogue and suddenly you find yourself with rather less choice and that’s when you have to get creative, which is exactly what Bono did. Up front the E32’s stock struts have been modified to accept air bags while at the rear it’s running an E60 air-ride setup, which has also been modded to correctly fit the E32. The system uses a simple single tank and compressor setup and for management Bono has opted for AccuAir’s SwitchSpeed system; it basically offers an advanced form of analogue control, giving you a sleek remote that, while not offering ride-height presets, does deliver full control over each bag, as well as allowing Bono to work the bags in pairs. Bagged classics only ever look stunning and, airedout, this E32 is positively majestic and this was definitely the right suspension option for this project.

The rest of the car has been left much as BMW created it back in 1991 when this 7 Series was new, and we have no complaints about that. The exterior, with those stunning, long, elegant lines and chrome bumpers and accents throughout is one of BM’s best, featuring everything we love about BM styling from the ’90s and there’s a sense of timeless grace about the car. That’s not to say it doesn’t have presence or drama and it’s still an imposing machine of obvious luxury, even after all this time. The M30B30 straight-six that sits beneath the long bonnet is a strong performer, delivering as it does 188hp and a strong 192lb ft of torque in silky-smooth fashion, and it’s perfect for how Bono likes to enjoy his 7 Series, cruising low and slow and the cabin, with its opulent leather and acres of wood, is just the sort of place you want to be for doing exactly that. 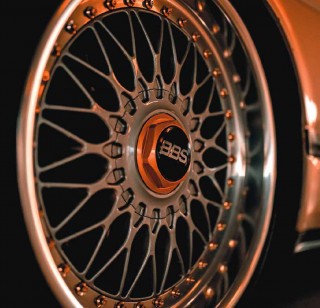 This project may have been a simple build but that doesn’t take anything away from the end result and this is a painfully cool and seriously sexy 7 Series and, above all else, Bono absolutely loves it. “I just like everything about my car, every time I open up my garage it creates a gigantic smile on my face,” he says, with a broad grin and who can blame him? This is a pure feel-good car, one that you will always enjoy driving and which will always make you happy, and that’s exactly what a car should do and it’s not just Bono who gets to enjoy it. “Everybody is in love with the car, I’ve got a lot of positive reactions about it. It’s funny when some people think your suspension is broken because it’s lying on the ground,” he adds with a laugh and building a car that everyone can enjoy is no mean feat and just makes you feel good when you’re greeted with a sea of smiles and thumbs-up whenever you go for a drive. Bono does have a few other possible mods in mind; “Maybe another set of rims – I have a set of 19” three-piece Hartge wheels I want to fit on it, and maybe a bumper lip from a 740i,” he says, but beyond that there’s nothing else he’d change. He’s got his E32 exactly how he likes it – and clearly how everyone else likes it too – and that’s all you could ever want from a build.

“Up front the E32’s stock struts have been modified to accept air bags while at the rear it’s running an E60 air-ride setup, which has also been modded to correctly fit the E32”