It’s often tricky to get across the sound of a car in a written feature, so you’re going to have to use your imagination a little with this one. Conjure up the throb of a straight-six that’s being forced to do unseemly things, propelled into the tortured hinterland between rumble and gargle. Overlay that with the relentlessly rising crescendo of whistles from a colossal turbo which has no right to be where it is, muscling its way into the song sheet with insistent elbows; add in the punctuating sneezes of a dump valve and howl of a wastegate that would be at home in a top-flight WRC car, along with the subtle but ever-present chattering of a hardcore valve train and, of course, the deep-lunged bellow of large-diameter pipes that just can’t get those spent exhaust gases out of there fast enough, accompanied by the explosive pop of vast orange flames. A multi-layered punk symphony of aggression and malevolent sonic disturbance. Even with your eyes shut, this BMW is hard work.

Imagine what it’s like to drive, then. With 941hp going straight to those mercilessly abused rear tyres, it’s no wonder that Henrik Nygren (Nygren Motorsport across all social media) has arm muscles like marine hawsers. This isn’t a car to gently trundle to the shops in, this is a visceral and exhausting pursuit of the destruction of the very concept of physics itself. A 1980s 3 Series shouldn’t be this powerful. A Bugatti Veyron, yes, but not a 3 Series. Exactly what manner of fresh hell is this?

The lunacy of it all stems back to Henrik’s introduction to the world of BMWs, many years back across the crackling time circuits, and the notion of sensory befuddlement has been chief in his affections ever since. “My first BMW was a purple E21 323i,” he recalls. “The reason I bought it was that when I went to view it and the seller took me for a test drive, he pulled a bunch of doughnuts. I just had to have it, I bought it that same night.” It’s safe to say that Henrik’s journey with the fabled propeller badge was never going to be one of gentle pampering and mechanical sympathy, then. And his back catalogue since those boisterous early days shores this up with gusto; he’s had an 5-Series BMW E28 with an S38 motor swapped in, four E30s and an E36 that got turbocharged, and he’s also boosted all sorts of customers’ BMWs too. Purity here always takes a back seat to performance. “I’ve been into BMWs since I was about 10 years old,” he assures us. “I love the quality, and I’ve found that it’s easy to use parts from other models to make them faster.”

“The S50’s exhaust manifold has been replaced by a custom item upon which is mounted a Garrett GTX8435RS GEN-2 turbo, a unit the size of a football”

Rather brilliantly, the build of this startling E30 wasn’t precisely mapped out from the beginning, but actually started from a speculative purchase of a half-built car Henrik found on Blocket (Sweden’s largest buying-and-selling site; he hails from Strängnäs on the south-east coast). Having found himself confined to quarters with sickness for a few days, he was idly browsing the classifieds and found an E30 – this E30 – complete with roll-cage and D2 coilovers. It looked like fun, and he’s an impulsive kinda guy, so he took a punt. “I just went out to Västerås, about an hour from where I live, and bought it,” he shrugs. “And I blew the engine on the way home…”

The initial plans were basically nonexistent as, with a bunch of work already done to the shell and the chassis, Henrik was looking forward to simply playing with his new purchase and seeing what it could do. Of course, seasoned modifiers with a taste for fireball horsepower can be tricky to contain, and with his gung-ho approach to driving cars till they break and then building them up faster, there was a certain inevitability to what happened next.

“I started by putting an M60 V8 turbo motor in there, since I’d blown up the engine it came with,” he says, as if that’s the most normal thing in the world. “After three broken M60s, it became an LS V8 machine,” he continues, “and after a while I sold that and built this S50B30. In that time there have been 10 clutches, six gearboxes, and endless amounts of rear tyres.” Again, he’s not boasting here, it’s just his way of keeping the E30 in line – it may be hard work to live with, but Henrik compensates for that by giving the car hell.

It fights back, but he always wins. The S50 motor he’s built is a hugely impressive thing too; the straight-six of the kind you’d find in an E36 M3, Henrik’s seen fit to butch up the bottom end with DP pistons and forged rods from PPF, fully balanced and overseen by MaxxECU Race management. “My aim was to break the 1000hp barrier, which I’ve now achieved with 941hp measured at the wheels,” he nonchalantly mutters, the butterfly effect of his startling casualness causing several far-off suns to collapse.

How was this astonishing feat achieved? Massive, massive boost, that’s how. The S50’s exhaust manifold has been replaced by a custom item upon which is mounted a Garrett GTX8435RS GEN-2 turbo, a unit the size of a football. This works hand-in-hand with a Precision wastegate and dump valve, chunky 4” intercooler and, naturally, vastly increased fuelling courtesy of a Nuke fuel rail and Bosch 2200cc injectors. It all snorts through a custom exhaust system that’s 3.5” all the way along, with dual side-exit pipes, plunging us right back into that cacophonic maelstrom of noises we came in with.

Sporting a muscular chassis setup and that rugged roll-cage to tie things together, the underpinnings were running on the right lines to keep all of this insane power in check, although Henrik did have to make a few evolutionary adjustments along the way. This included having some custom driveshafts made up, along with swapping to a five-stud setup to allow for stronger and more heavy-duty hubs; this all works in tandem with those trusty D2 drift-spec coilovers, and he’s also opted for a Wisefab steering kit for enhanced angle mischief as well as a 750i four-pot brake upgrade to rein in the madness as much as possible. Inevitably all of this is so much pushing against the tide with such genre-redefining horsepower steaming forth, but that’s just the nature of the build. It’s a vicious, terrifying thing, and Henrik wouldn’t have it any other way. While it would be fun to tie all of this up in a stealthy package – say, making it look like a stock and unmodified 316i – that’s not really practical once you have to start widening the track and bolting on whacking great intercoolers and whatnot, and the consequent exterior package here is a masterstroke. We’ve seen the VMR Customs/Rebew Design wide-body kit in these pages before, and it really does befit a car with hypercar-rivalling horsepower, its staggering girth topped off by the E30 M3 rear spoiler complete with carbon Gurney flap. “I saw Viktor Mårtensson’s E30 at the Elmia Custom Motorshow,” says Henrik matter-of-factly, “and later when he started producing and selling the kit, I ordered one directly.” Sitting over those 17” Corvette sawblades (one of numerous sets of wheels he likes to chop and change between) it provides the perfect fusion of retro racer and contemporary scene-stealer, and that’s a theme which continues inside the car. You’ll find little in there beyond that ’cage, Bimarco buckets and RRS harnesses. It’s all action inside; Swedish tuning legends Suvi Performance have been tapped up for their high-quality pedal box, handbrake and gear-shifter, giving it the appearance of a 1980s Touring Car with its enormous functional levers looking like they were stolen from a traction engine. There’s no messing about here. Not even a little bit.

“All in all, it’s taken me about three years to get the car to this point,” Henrik ponders. And if money were no object and he were able to farm it out to a big race shop instead of spannering it in his garage, what would he do? “Oh, nothing,” he grins. “It’s just the way I want it now.” With that, he bangs that abused transmission into first, revs the tortured S50 until its mighty turbo is howling like a jet engine, dumps the clutch, and colourfully fishtails toward the horizon in an impenetrable billow of tyre smoke. As visual references disappear into the smoke, all we’re left with is that deranged symphony of mechanical sounds. Growls, shrieks, rasps, pops, clunks, bangs, it’s like every single Warner Bros. character fighting one another in a cloud just out of view. What an utterly terrifying car this is, and we love it for that.

THANKS Thanks to Svensk Prestanda for tuning the car, all my friends who have helped me along the way, and my understanding girlfriend and son who support me so much

“ It’s all action inside; Swedish tuning legends Suvi Performance have been tapped up for their high-quality pedal box, handbrake and gear-shifter, giving it the appearance of a 1980s Touring Car” 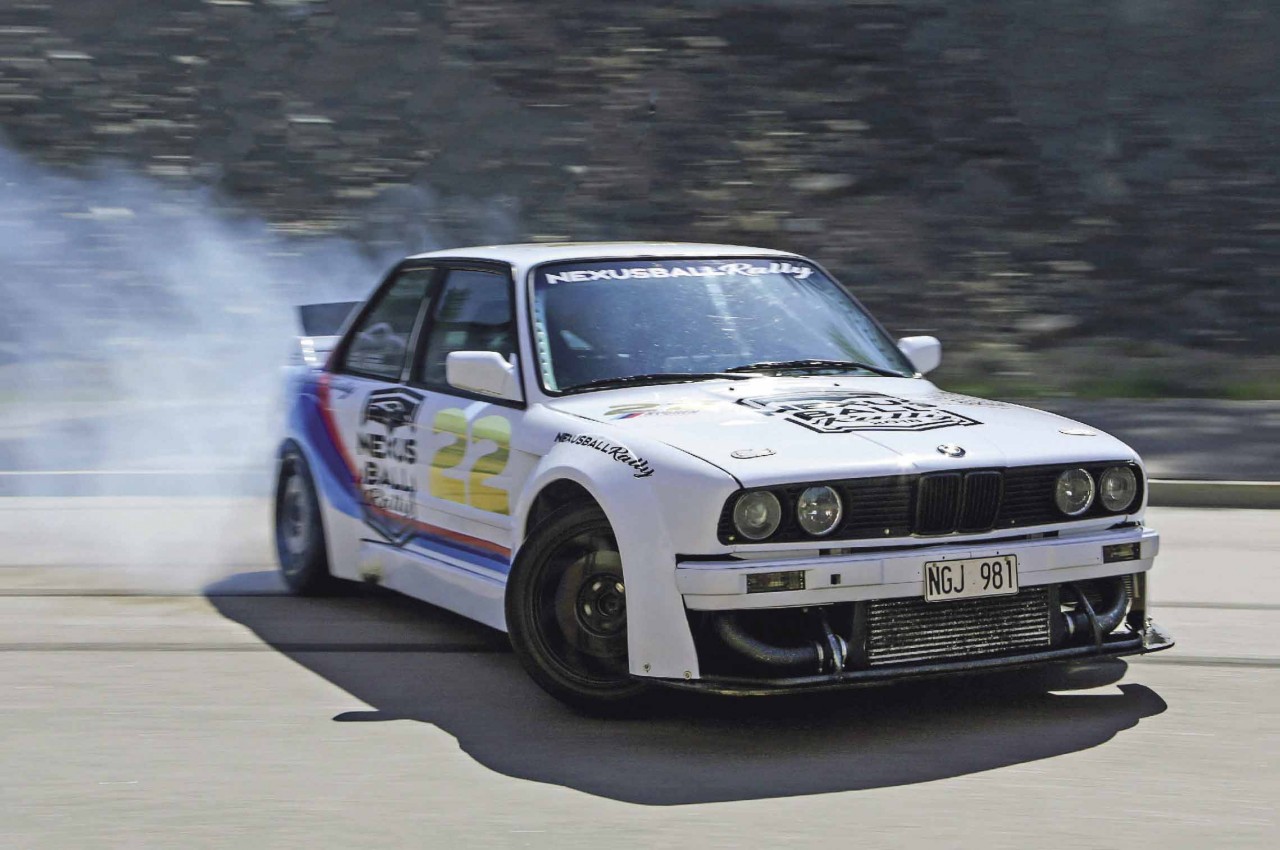 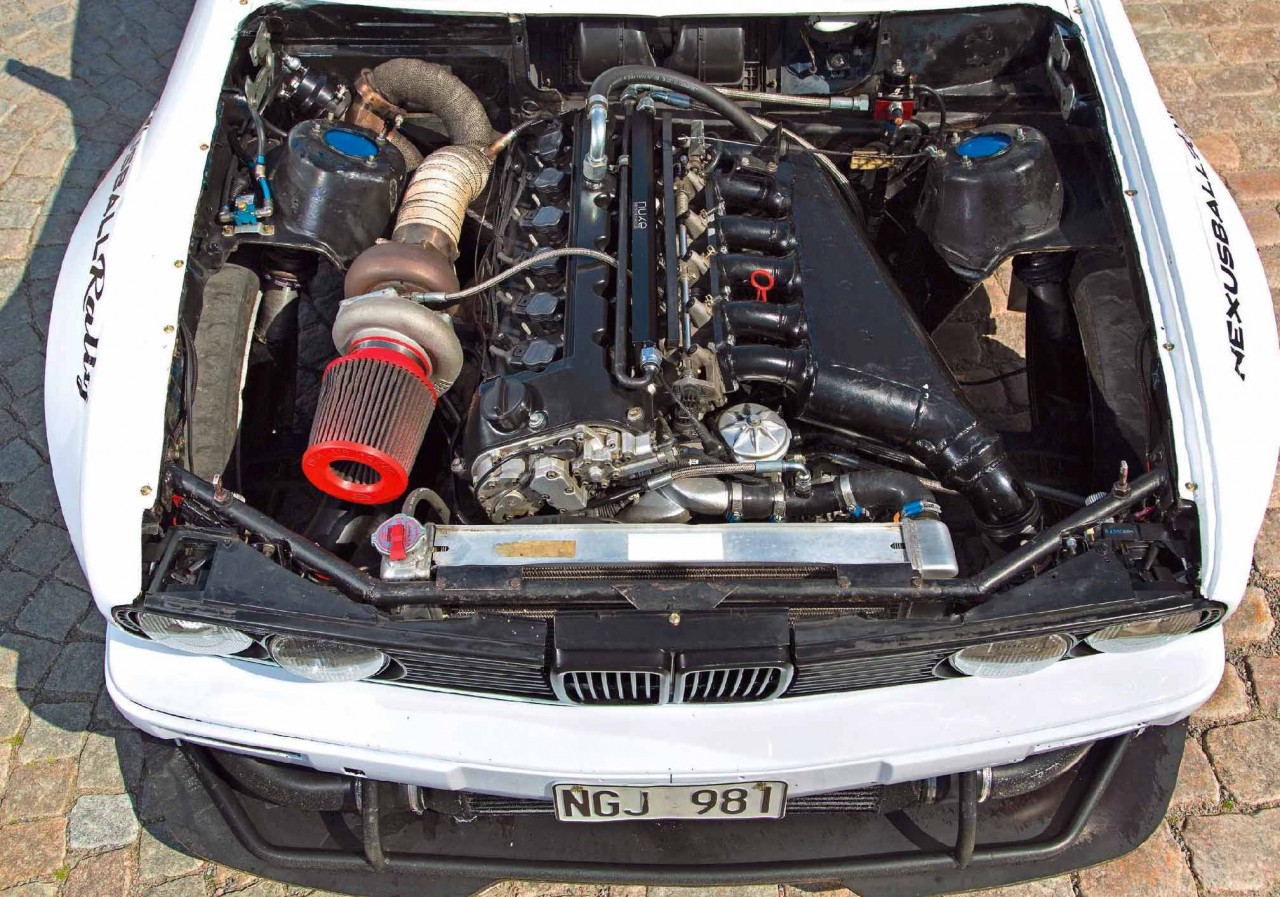 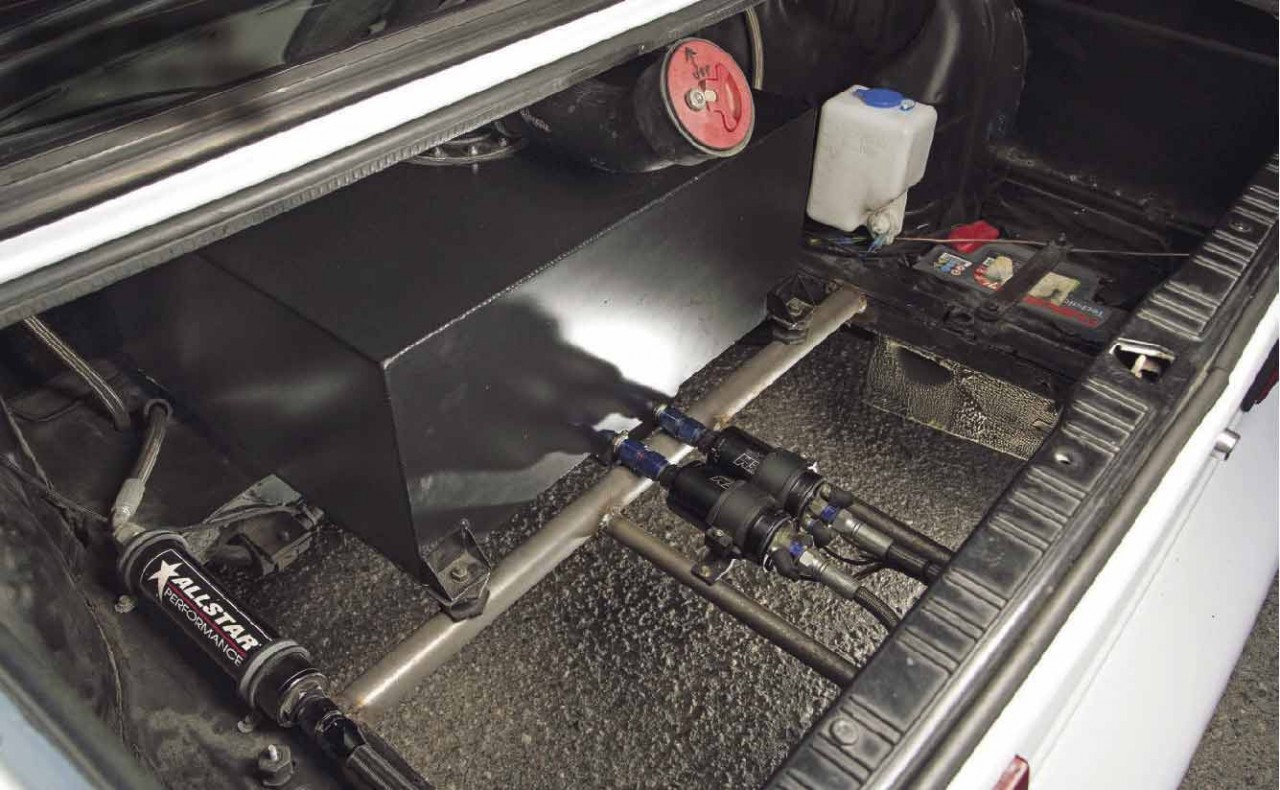 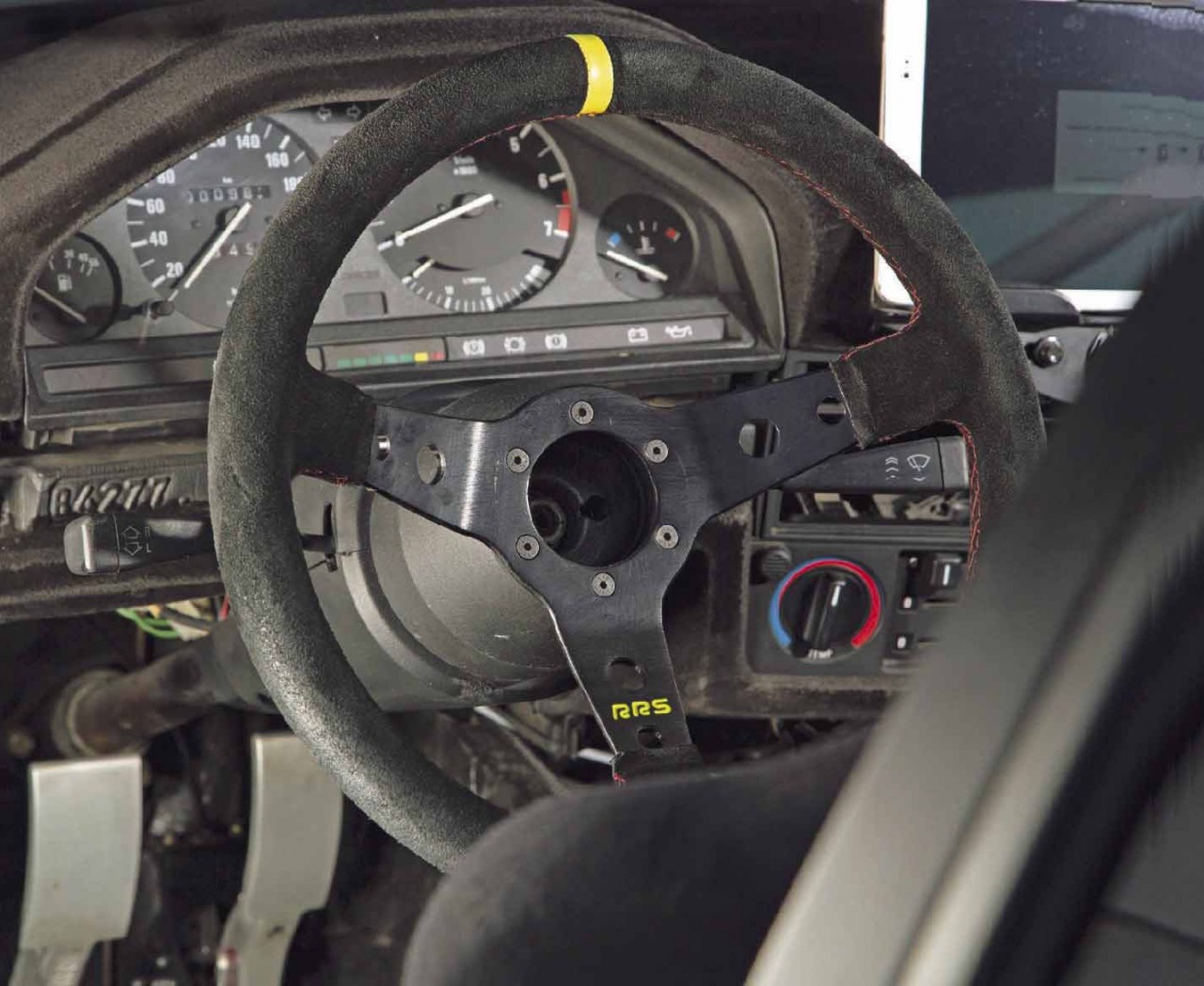 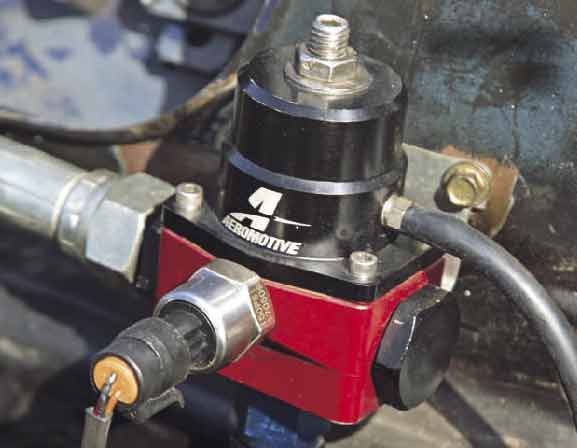 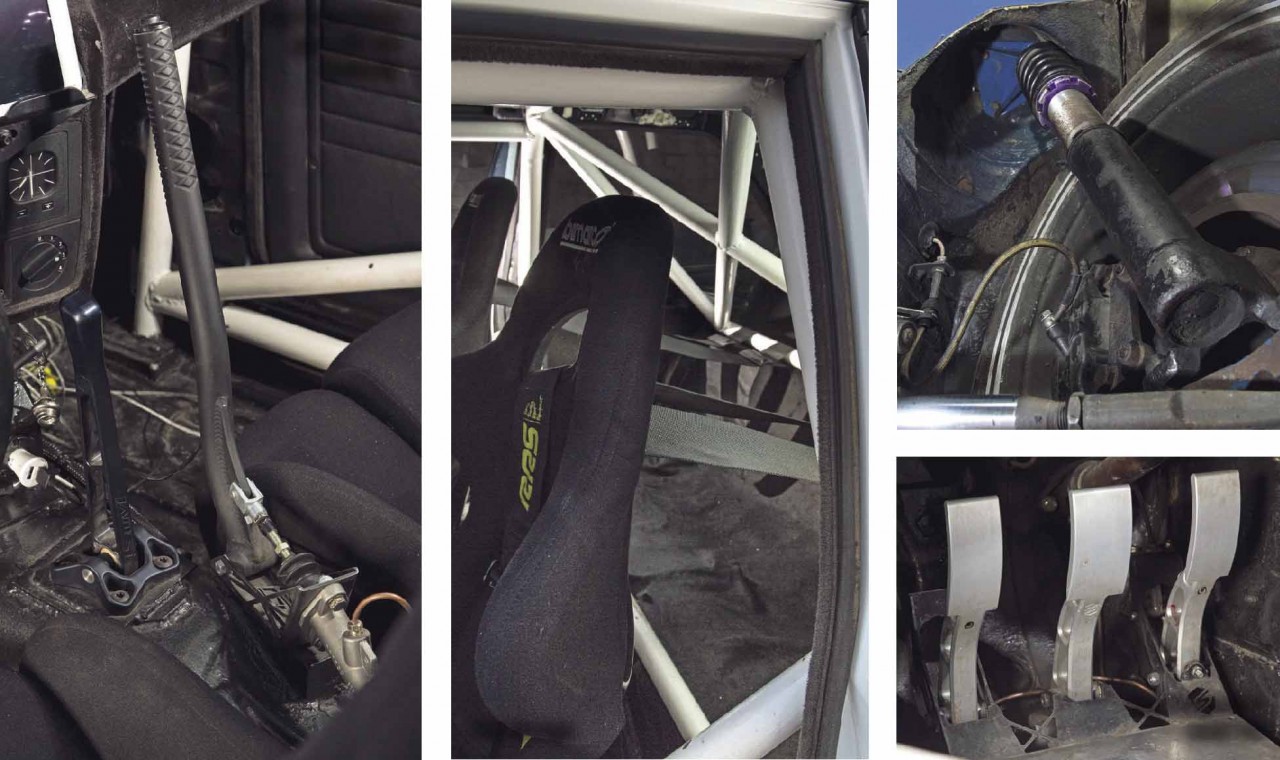 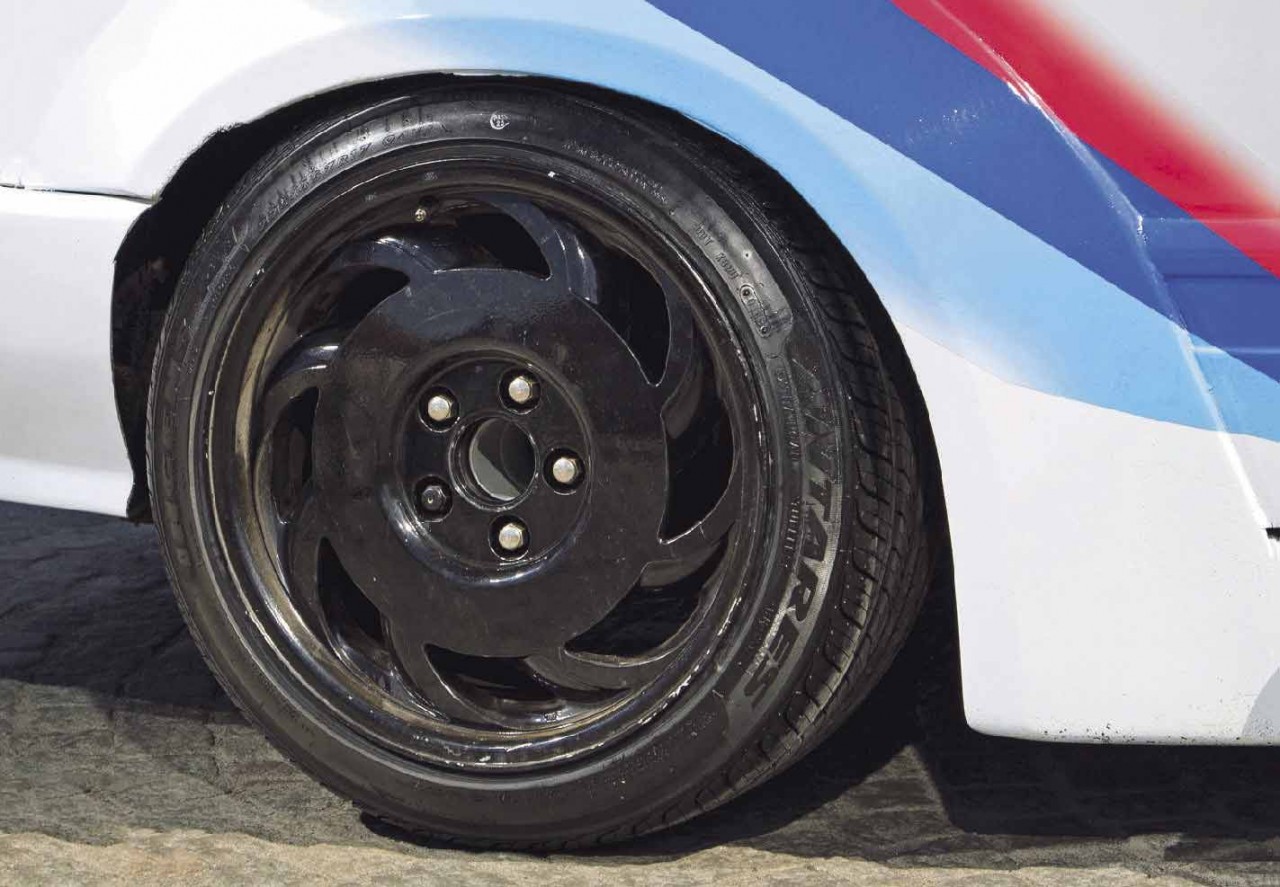