4WD CORSA B The ‘90s may be seen as a bit of an old skool era nowadays… a tirade of modern classics at the very least. But Crank’s Corsa here, brings with it 20th Century chic, but with proper 21st

HATCH MADE IN HEAVEN CORSA B 4X4

For as long as cars have existed, people have wanted to muck about with them. Ever since mankind first started nailing together automobiles as an alternative to horses, plucky young daredevils have been uprating parts and getting up to mischief. Early hot-rodders blew off steam in the wake of various wars and military tours by getting together to share their skills in the pursuit of going faster; NASCAR evolved from the criminal element’s enthusiasm for building super-fast sleepers for bootlegging purposes – and it’s not all battlefields and moonshine. It’s a basic, ingrained human behaviour. We’re compelled to modify our cars because, well, we just have to. And there’s a whole weight of history behind this that we can happily blame for it. 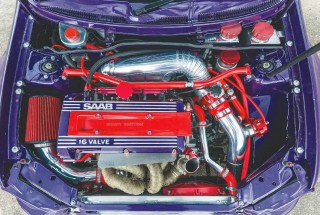 The’80s and ‘90s were definitely the era of the hot hatch. This newfound thrill represented everyman performance in a brilliantly accessible package; everyone from Clarence at Lloyd’s of London to Bob at Jewson’s hankered after a shopping car with stealthy firepower, and how did people modify these cars? Why, with plastic, of course. It started in the eighties, the decade that celebrated plastics more than any other.

Window louvres were bang on-trend, and the real big business lay in bodykits. All the cool kids had an assortment of plastic addenda bolted onto their cars; all colour-coded, of course, and if the wheels were colour-coded too, all the better.

The keenness for bodykits really ramped up in the 1990s; the Ferrari Testarossa in particular seemed to capture the public imagination, with everyone clamouring for sidestrakes, and as the decade wore on the aesthetic treatments grew ever-more extreme. Headlight swaps from other cars were where it was at, along with smoothed bodywork, bad-boy bonnets, oodles of mesh, wing vents from Mercedes vans, and the biggest rims possible – remember when wheel manufacturers started making 19s rims in 6 and 7-inch widths?

Suddenly nineteens fitted on Novas! So where does all this leave the humble Corsa B in 2019? A bona fide hatchback survivor, forged in the smoky crucible of the old-school hot hatch era (back when they weren’t old-school!), this was once the rude-boy hot ticket – if you had a decked GSi on Venoms then you were basically king or queen of the seafront back in the New Labour days… but time’s moved on and the second-gen Corsa is increasingly sidelined as a relic of the past… but not, however, for Andrew Crank (or just ‘Crank’ to his mates).

As you can see here, he’s built an ultra-modern interpretation of the Corsa B platform, taking up-to-the-minute technology and offbeat engineering decisions to create something astonishing. This is like no Corsa you’ve seen before, this is completely deranged.

The purists had better avert their gaze lest they froth themselves inside out, as Crank’s approach has been to apply a sort of taster-menu effect to cherry-pick the most piquant ingredients from a smorgasbord of manufacturer options. It may be Corsa shaped (albeit drastically pumped-up, nineties-style), but there’s a Saab engine under the bonnet and Audi quattro running gear underneath. There really is no logical earthly reason for shoving all of this madcap tech into a Corsa, but then a few minutes with this effervescent and creative tuner will teach you that logic doesn’t necessarily come into the decision-making process all that often. And why the hell should it?

“I built this to be a track toy as well as a show pony,” he says, which explains why the stellar engineering is complemented by a pristine and flawless finish. “I’ve basically always had Corsas, aside from one Mk4 Astra; I’ve had this Corsa for five years now, and it started off as a standard 1.0.” This all feeds beautifully into the idea of 1990s modding, as anyone who grew up in that age will be keenly aware – particularly those who used to rip around in their mums’ one-litre hatchbacks and mod them with bolt-ons when they weren’t looking.

“I originally built it up front-wheel drive,” Crank continues, “but the engine seized up and when I set about fixing that, I decided to make it 4WD at the same time.” Sure, as you do. But before we delve into the tantalising world of just how all of that was achieved, let’s first consider the aesthetics. After all, the Corsa B has an inherently 1990s profile (obviously, being a ’90s car), and Crank’s cleverly created a generational bridge with the styling: bodykits, as we’ve discussed, were all the go back then, and of course the widebody trend is massive in 2019. So what he’s done here is to fit a BAT Motorsport wide-arch kit, which is both classic and modern at once, and embellished the look with the retro-fabulous Morette lights, DTM mirrors and Euro tails. This wouldn’t have looked out of place on the cover of Fast Car in 1999, and yet it looks funky-fresh right here and now. The carbon fibre work is more of a modern touch – the full roof skin is carbon, as is the bonnet and rear spoiler, while the tailgate is fibreglass and the windows are Perspex – this thing is as light as a feather. The banded Astra steels are a particularly clever touch too, eschewing the arms-race for blingin’ wheels of both generations and instead turning the wide-arch stance aesthetic on its head. We like this idea, lots But let’s stop teasing and look at that pan-marque drivetrain. Under the bonnet you’ll spot the simmering fury of a Saab B234 motor, a 2.3-litre turbo affair which Crank has sneakily hopped-up with a platter of tasty treats: forged pistons and rods, ported head, hot cams, juicy fuelling, and a Mamba turbo. It’s all beautifully colour-coded, following the purple-and-red theme of the exterior, and what particularly jumps out at you from the engine bay are the custom inlet, the writhing snake-like mass of heat-wrapped pipes that make up the exhaust manifold, and the perky screamer pipe which pokes through a vent in the carbon bonnet. With the stock Saab ECU expertly remapped to account for all of this lunacy, you’d expect the numbers to be big… and you’d be right. Peak power is currently in the 500bhp ballpark, while Crank’s shooting for a meaty 600bhp in the near future.

And while all of these engine shenanigans were going on, he was working hard to engineer a way to get all of this power down to all four wheels. The answer, after a lot head-scratching, was to graft in the quattro system from a Mk1 Audi TT 225. Now, if you’ve ever driven one of those, you’ll know that the turn-of-the-century Haldex system was essentially some sort of witchcraft; in a TT 225 you can take any corner (or roundabout) at any speed you like, and the chassis will just cope with it. You never run out of grip. So you can imagine the hysterics involved when you stick all of this into a Corsa and throw 500bhp at it. This is a sort of life-sized Hot Wheels toy, which is just begging to be thrown about at maximum attack because half-measures are pointless in something like this. It’s amazing he can keep it so clean, with the temptation to wring its neck and kick its arse at every opportunity being so great.

“There were a lot of hurdles through the build, it certainly didn’t make things easy for me,” he says, with the grin of a man who really relishes a challenge. “The main issue was the 4WD fabrication and adapter plate to mate the gearbox to the engine.” But hard work and tenacity got him there; indeed, that’s the standout of the whole build – Crank’s done every single thing on this project himself, including the painting and the mapping, and the results are little short of astounding. What he’s done here is to harness the lengthy history of hot hatch modifying, and indeed the very essence of modifying itself, and distil it into a modern interpretation of a ‘90s formula. Deftly proving that you can teach an old dog new tricks, this retro nineties hot hatch is one of the coolest builds on the scene ever.

“I’VE HAD THIS CORSA FOR FIVE YEARS NOW AND IT STARTED OFF AS A STANDARD 1.0!”

The quattro system is clever – it essentially uses a centre differential to apportion the engine’s power to whichever axle has the most traction. For example, if you start to lose rear grip in a corner, it’ll send more torque to the front to pull you out of the slide. Of course, you might not want it to behave this way, and that’s where standalone Haldex controllers come in. (Haldex Traction being the name of the company that makes the quattro system.) You see, quattro road cars are engineered for safety – most of the time they send the majority of the power to the front wheels, and it all operates within strict bias parameters, so it’ll never send 100% of the power to either axle.

However, by plugging in a Haldex controller, you can tinker with the system’s brain and tell it to send more power to the rear or the front as required – so you can make it heavily rear-biased all the time, if you so wish. And you can imagine why that’s desirable…

THANKS “Thanks to Nick from Welham Performance Engineering for engine machining work and rebuild parts, Tim Hicks at SAS for injectors, map sensor and fuel pump setup, Raj at Autoflock for the carbon fibre roof skin, and the missus for putting up with it!”