Way back in 2003, when the world was still reeling from Cilla quitting Blind Date and we were all excited about The Libertines before we realised Pete Doherty was a bit of a twat, when Johnny Cash died and Greta Thunberg was born (those two things probably weren’t linked), something seismic happened at the Frankfurt Motor Show. With a theatrical flourish, Audi whipped the covers off the final episode of a stellar trilogy – a series of concept cars beginning with the Pikes Peak quattro, followed by the Nuvolari quattro, and finishing in a glorious crescendo with the Le Mans quattro. Audi was absolutely on fi re at this time, in terms of design and engineering, but also in predicting consumer trends: the Pikes Peak quattro informed the myriad SUV models that exist today, the Nuvolari quattro developed into the extremely popular A5, and the Le Mans quattro was essentially the R8.

“I’ve been a petrolhead from day one, right back to when I was a little kid” 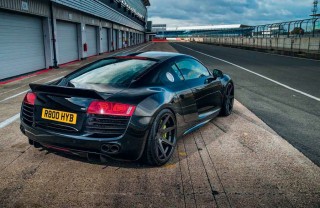 Dreams were spun on that fateful day. This rakish, mid-engined concept won hearts around the globe, with its bejewelled headlights, unusual side blades, and Lamborghini-sourced aluminium structure clothed in carbon fibre and aluminium panels. The excitement was too much for quattro GmbH, who sensed the quivering wallets of a generation of buyers who’d grown up with posters of Countachs and Testarossas on their bedroom walls, and developed the Le Mans quattro into a production car: the R8, taking its name from the R8 LMP race car, which had won the Le Mans 24-hour five times and was thus considered something of a dream-weaver itself.

Five hundred miles away in Harlow, Essex, Dave Perryman’s ears pricked up as those covers shimmered away. He was exactly the target market, the car enthusiast who grew up coveting those mid-engined supercars, who had those posters on his bedroom wall as a kid. The only problem was that Dave is just a normal guy, not some moneyed tycoon who can happily drop a massive wedge of cash on a shiny new supercar. And you can forget your finance and PCP deals – Dave’s a grafter, a self-made man, he doesn’t want to owe eye-watering sums of money to The Man. When he buys a car, he buys it outright. So what’s a fella to do? 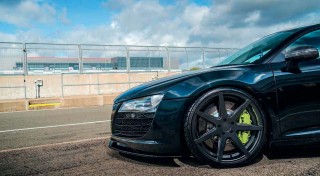 The answer, as it so often is, was to play the waiting game. He busied himself with his various modifying projects, indulging his fast car hobby, until the day came in 2019 when he could slap down a wad of readies and buy his dream R8, no strings attached.

“I’ve been a petrolhead from day one,” Dave assures us. “Right back to when I was a little kid, I was always taking things apart to see how they worked, and it was spending time sitting in an old Mini Clubman in the garage that really got me excited. Just sitting in the driver’s seat, imagining the open road. And when I turned 17, I was given the Mini – and I built it up into a cool little project; 1275 engine, wide arches, the works! I had an MG Montego Turbo after that, which was a proper little motor, surprised a lot of people with how quick it was. And then I reverted to Essex type with XR3s and XR3is, an RS1600i, an XR4x4 twin-turbo… and it went on and on. I had a 309 GTI and built myself a turbo motor for it, then had a load of Japanese stuff – Pulsar GTi-R, a lot of Mitsubishi Evos, 22B Impreza, Skylines, you name it. Even a TVR Tuscan! And I worked really hard to buy every single one of these. No-one ever gave me any of this, I earned it all.” 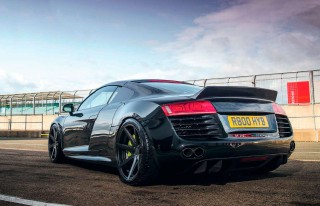 It’s this hard-won work ethic that plays such a starring role in the acquisition of the R8 you see before you. See, if he’s brutally honest, Dave’s reason for buying it was simply that he’d always wanted a supercar, and a first-gen R8 V8 was the most affordable route into supercar ownership. That’s not to say he was simply settling for what he could afford, of course; no, that spark which had ignited at the launch of the Le Mans quattro concept was still burning brightly when this R8 popped into his life. The car was in the right place at the right time. Although it has to be said that it wasn’t an easy route to get to it…

Prior to this car, Dave had owned a beautifully modified B5 RS4, something he’d had for a couple of years and poured a lot of time and effort into modifying in his own unique style. Then, one day in 2017, his business was ram-raided by thieves who clearly knew the RS4 was in there, as it was the only thing they took when they got in despite the place being full of tools and customers’ cars. However, their haphazard efforts to get into the building caused tens of thousands of pounds’ worth of damage – and what’s more, the tax had just run out on the car, the SORN form in his hand and ready to be sent, so the insurers washed their hands of it and Dave got nothing. He was right back to square one. It was a total kick in the teeth.

But Dave’s not a quitter. He was determined not to let this setback beat him, but instead to come out swinging harder than ever before. Pooling his resources and refocusing his efforts on a B7 RS4, he started the merry dance all over again… until one day, on a whim, the thought occurred that he could actually achieve the supercar dream he’d always carried. A buyer had been sniffing around the B7, and a deal was struck at the right price so that Dave could lay it down on an R8 he’d spotted advertised on Canvey Island. 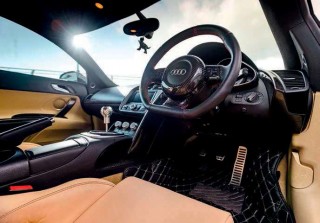 “It belonged to an old boy who was terminally ill, and was working through a bucket list of cars he wanted to own,” Dave explains. “He’d only owned it three months but was keen to get onto his next car. It wasn’t exactly as advertised, it did have quite a few issues, but they were all things I was more than capable of fixing myself, so I struck a good deal and got it for a price I could afford.” Among the discrepancies in the advert was the fact that it had supposedly just had a full respray – it turned out that this had happened four years before and it was getting a bit shabby, but being a bodywork man by trade, Dave wasn’t put off by this. And a huge plus was that the car had fairly recently had a full engine replacement under warranty – even now, the motor’s only got 29k miles on it.

All the signs were pointing toward a perfect project base. Ah yes, but of course it was going to be a project. It may have been the lifelong dream to own a supercar, but he wasn’t just going to buy a stock one and call it a day. Modifying’s in this dude’s blood, it was always bound to end this way. So, after fixing all of the R8’s various issues, Dave set about putting his mark on it. It makes all the right noises thanks to a Milltek exhaust system, working with a K&N filter that’s housed in a box he’s customised with a viewing window; he’s also painted the engine plastics in a cool effect that graduates from pearl black to gloss black, while inside the car you’ll spot a custom carbon steering wheel ahead of a pair of Braum Racing seats that have been retrimmed in OEM beige to match. The chassis has enjoyed a comprehensive makeover too: “The magnetic ride kept clonking and needed replacing,” Dave recalls. “I think it’s too solid for road use anyway, it’s alright if you’re on the track – but I opted to swap it out for a set of BC Racing coilovers.” With added aggression fed into the ride height, naturally he had to fill out those arches with something more serious, and the answer was a set of 20” Rohana RC7s. “I was told 11-inch-wide wheels wouldn’t go on the back of an R8,” he grins. “Proved them wrong, eh?” 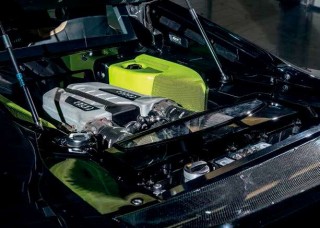 Perhaps the most dramatic element of the reimagining of this car lies in the myriad carbon fibre parts you can see all over the exterior: the side blades, mirrors, rear diffuser, rear fins, exhaust tips, it’s everywhere – and the coolest part (and Dave’s favourite element of the whole project) is the Liberty Walk ducktail spoiler. He’s cunningly half-painted it, so you can see the carbon weave if you’re standing beside or above, but it looks more OEM if you’re following behind. Ingenious.

So, this is really a tale of a dream coming true; of a lifelong petrolhead finally acquiring the supercar he’d always fantasised about. Naturally he guards it pretty jealously, particularly given the brutal nature of how his old RS4 was stolen – the business premises now has some frankly phenomenal security, it’s a veritable Fort Knox, and this is also true of the R8. The car has a supremely clever alarm system that will allow a thief to start the engine and think they’re safe, then shut it down, deadlock the doors and sound a deafening 200db internal siren. It’s safe to say that Dave is not a man you f**k with.

And what about the R8 now it’s rocking an aspirational spec and a trophy-winning finish – does it sit on a pedestal, wheeled out on dry days for short runs to shows? Not a bit of it. “It’s a daily driver – of course it is,” he laughs. And why not? After all those years of dreaming, the devastating setbacks, the hard graft and the ultimate victory, Dave’s keen to spend every second he can in it. It’s his dream car, pure and simple. 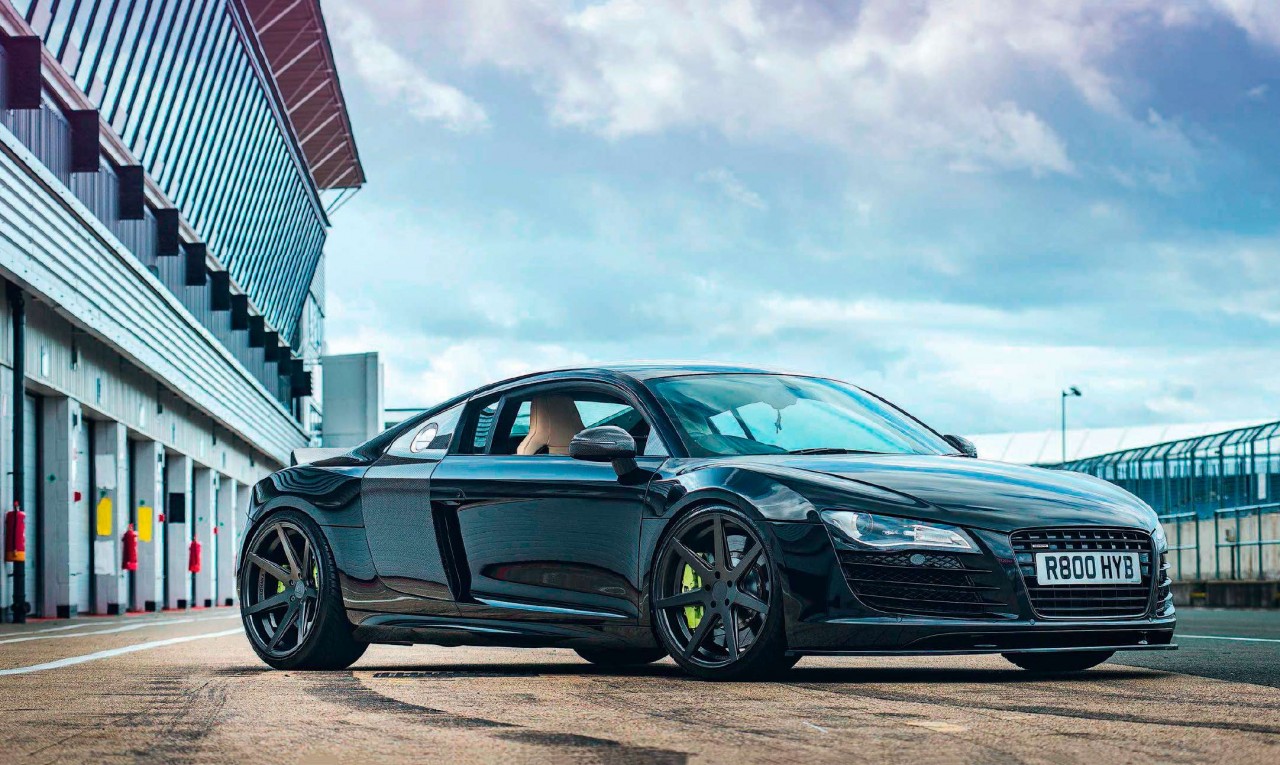 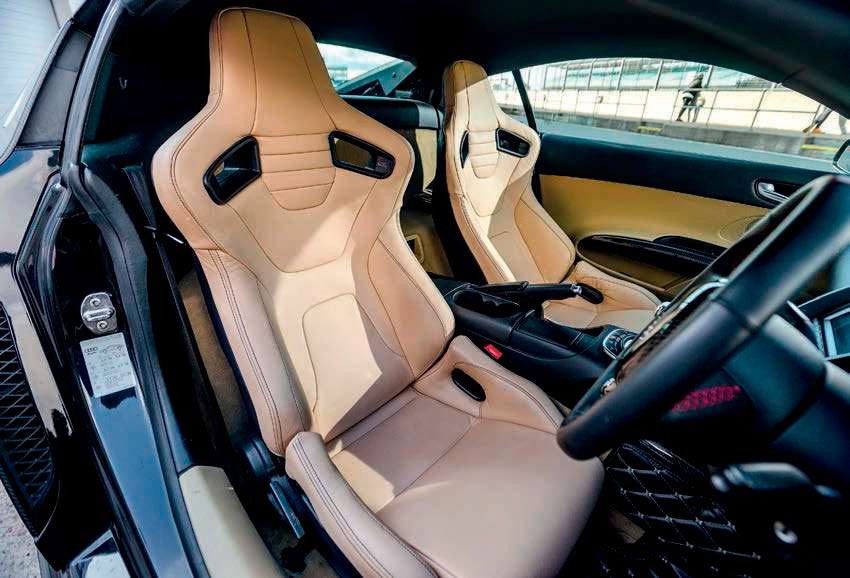 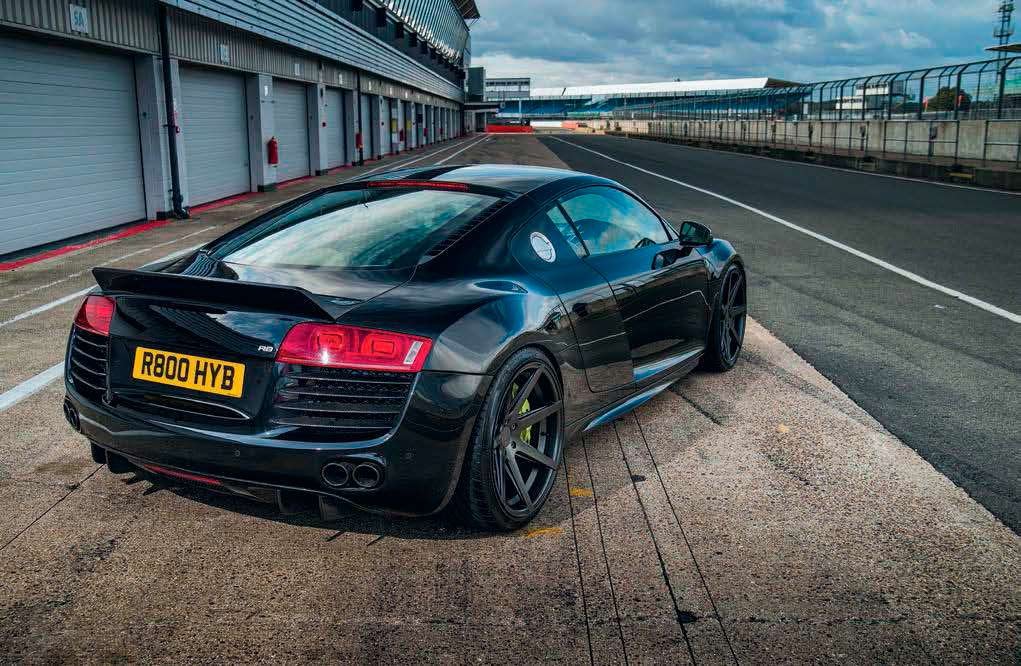 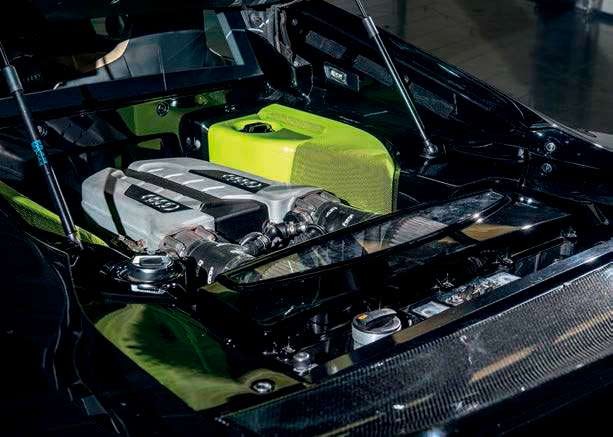 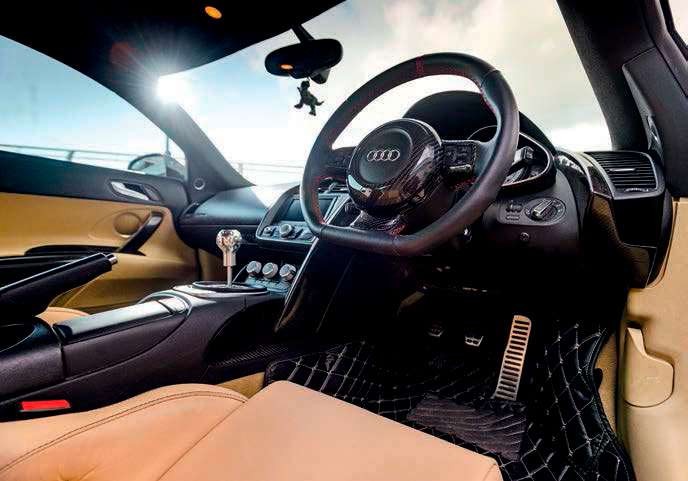 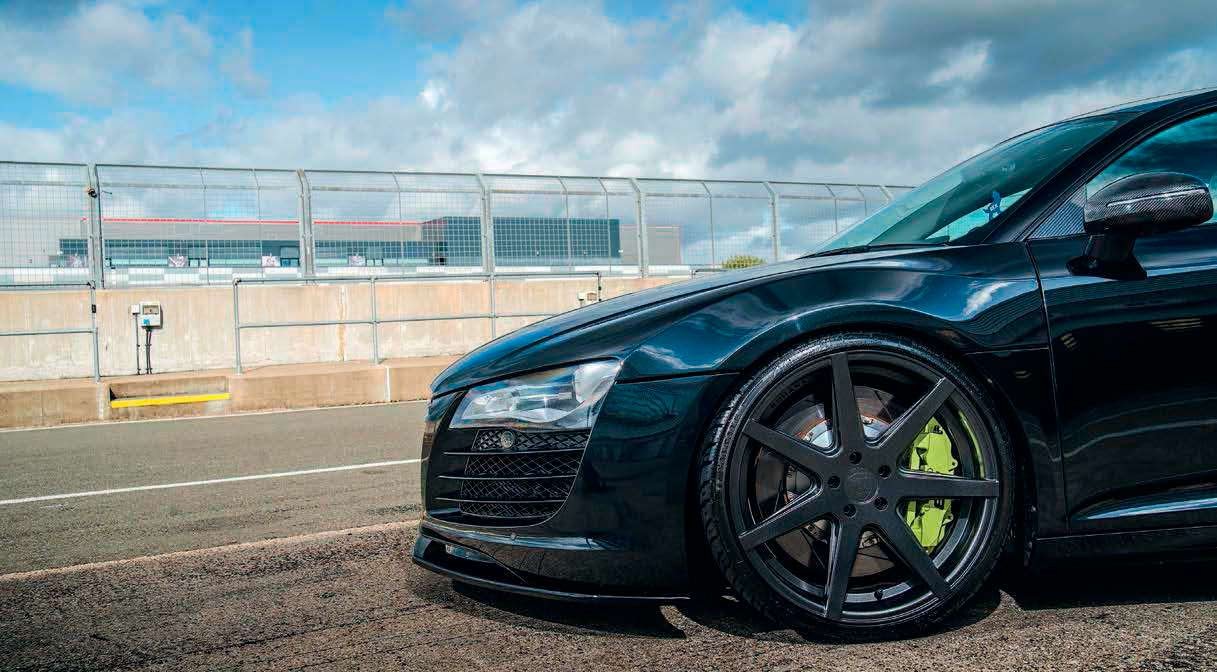 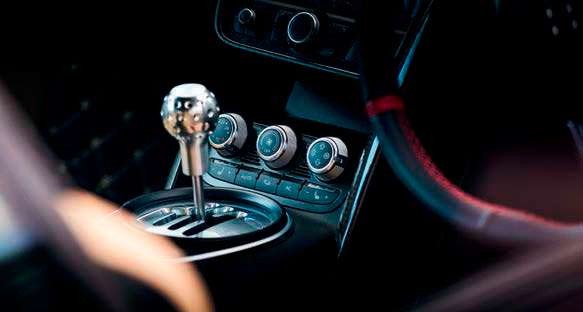 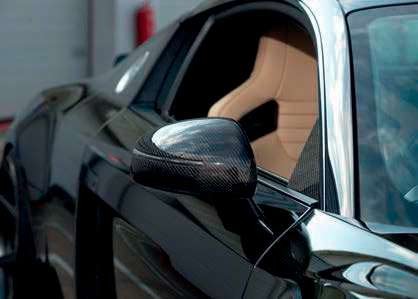 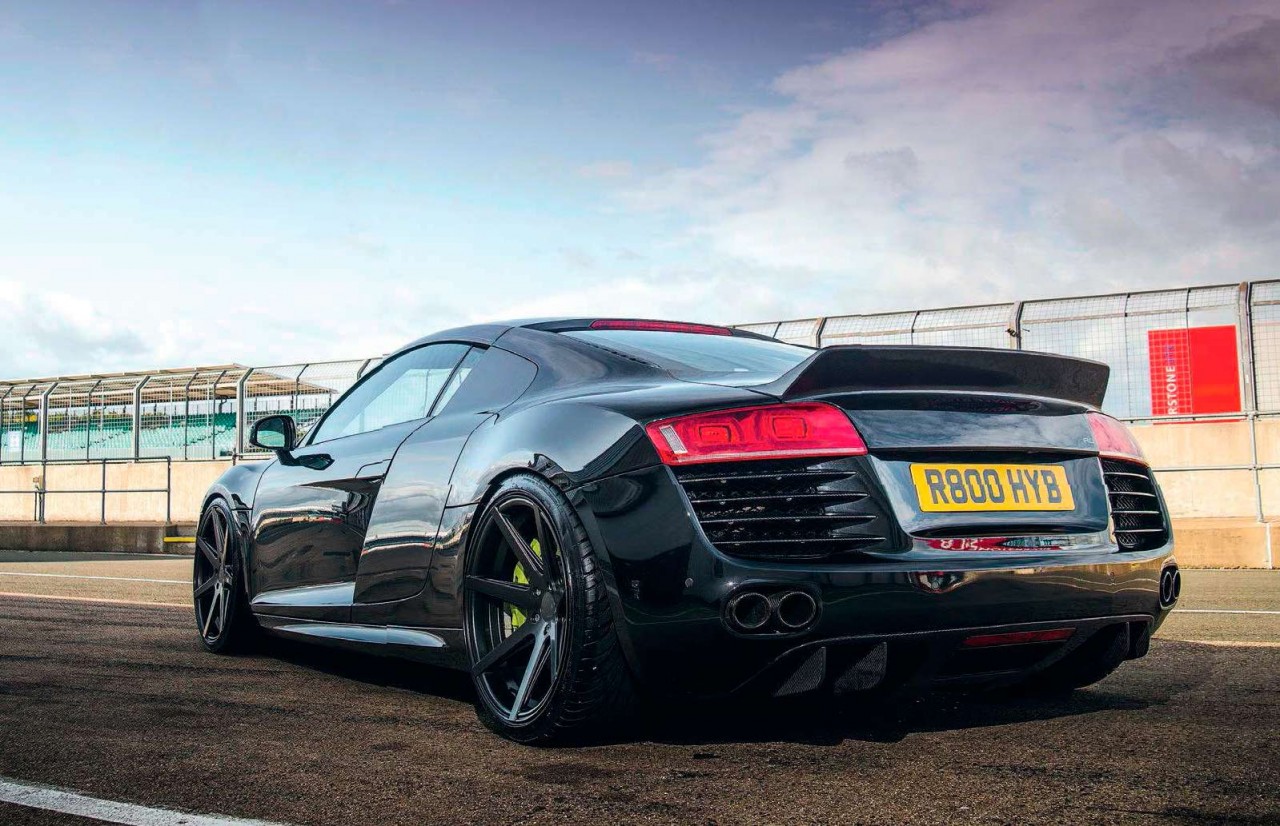 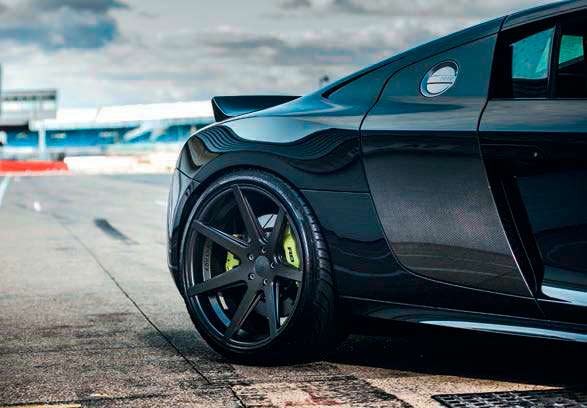 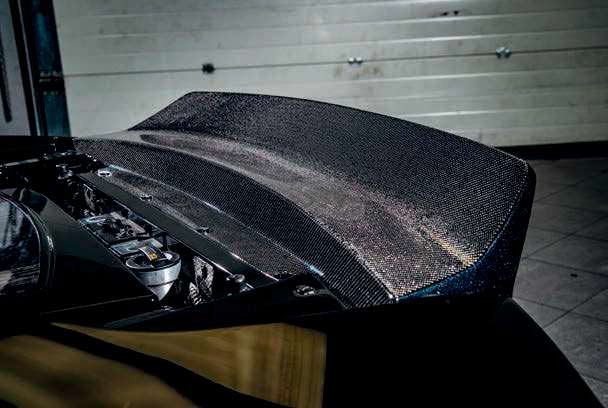 Impressively, most of the carbon fibre parts you see on this car are all Dave’s own work – even the custom steering wheel! The exhaust tails were crafted in his workshop, as were the rear fi ns (the horizontal elements between the exhausts and taillights), although there’s a cautionary tale there: he’s going to remake them stronger as the spectacular heat from the pipes is causing the fi ns to melt. “I wish I’d known that before I spent 45 hours making them,” he laughs, “but this is how we learn…”