The phrase ‘barn find’ is the bane of today’s car ads. People have really latched onto the idea, as it indicates a hidden treasure, a once-in-a-lifetime opportunity; there was a point in time when genuine barn finds occasionally surfaced and made waves across the motoring community   one-owner rarities that were locked away and forgotten about, to be rediscovered by surprised relatives after the owner’s demise. But nowadays the term has been hijacked by quick-buck merchants… pop the phrase ‘barn find’ into eBay and you’ll be treated to a massive list of cars that have simply run out of MOT a year ago and been parked on someone’s drive. 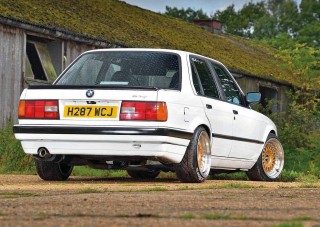 So when we do hear about genuine barn finds, you can imagine the excitement it causes – like the four-door E30 you see here. This wasn’t simply an old runabout that had been left unused for a while, its owner – 24-year-old Karl Coca – genuinely did find it in a barn. Although this isn’t one of those fairy tales about it having been owned by a little old lady who put 100 miles on the clock before parking it up in the hay barn for good. “I actually stumbled across the car, looking sorry for itself in a barn, when I was helping a friend with his retro project,” Karl explains. “It had sat in the same spot for over six years and looked like a total wreck – it had been stripped for parts, and not in a nice way.

Most of the car was missing, including the rear arches due to rust! However I could see potential and just knew I had to have it, so I paid £400 for it, which I couldn’t really afford, so I gave the owner £50 a week until it was all paid for.”

The best part of half a bag of sand may sound like an ambitious wedge for a seemingly terminal case, but Karl’s got form and a keen eye; he used to work in motorsport and now earns his crust in car body repairs, so he has an innate sense of what’s strong and what isn’t. He’s also more than a little curious about the inner workings of BMWs: “I love the older Beemers because of their bold retro looks, the racing pedigree and that fantastic six-cylinder sound that comes with them,” he enthuses. “I’ve always wanted an E30 for as long as I can remember and, at the time with my small budget, a ‘parts car’ left in a barn was all I could afford! Mainly because I love the old-school look and the racing potential it had from the off, I knew it wouldn’t take a lot to make it into a serious track weapon that I wouldn’t lose all my investment in.” Given that he’s also got a two-door E30 on the drive that’s going through a turbo conversion, along with a sensible E82 and an E38 that’s being harvested for bits, it’s safe to say Karl’s healthily brimmed his E-numbers. He was pretty single-minded in his ambitions then, having acquired this rusty hulk? “Oh yes, I knew straight away that I wanted to build a really clean, but fast track car that still looked like the original E30 that it was,” he says. And being a go-getter sort of chap, that’s precisely what happened.

Stripping the car right back to the shell, Karl was able to calmly assess the full extent of the degradation and analyse what work needed to be carried out. While it ran to an extensive list, it was all well within his skill-set, so he set about the challenge with methodical and calculating logic. New quarters were welded in to replace the crumbly originals, along with new corners for the floor and some fresh inner arches. With the shell structurally solid, it was then a case of spending countless hours filling and correcting all of its minor imperfections, prepping the body for paint, and then laying on a few coats of Ford’s Frozen White. “I chose that because it’d be easy to colour-match in the event of any track-based mishaps, which will definitely happen,” he grins. The subsequent reassembly stage saw the chassis receive a thorough freshen-up, with every bush replaced throughout the suspension system, and a set of Bilstein coilovers installed along with camber plates, and strut braces at either end. The braking system originated in a 325i, although the servo actually came from a Mazda 323 as it’s the only one that’ll fit in the newly-reduced space in the engine bay. Which brings us neatly onto the subject of motive power…

What we’re looking at here is an M52TUB28. This is the kind of 2.8-litre straight-six you’d normally find in an E46 328i, a Z3, or a late-1990s 5 or 7 Series. A far more modern engine than the E30’s original range, essentially, and the ‘TU’ in the descriptor stands for ‘Technical Update’, meaning that this is the post-1998 evolution of the motor with dual-Vanos to boost low-end torque (which is what differentiates it from the earlier version of the engine you’d find in the E36). It’s a seriously muscular engine and the perfect partner for the E30’s lightweight body, giving this 3 Series some serious shove.

“The engine internals are standard,” says Karl, “however it had a really light flywheel from an M20 that I then had machined down to 4.7kg, including the complete clutch. I also had some racing exhaust manifolds made up, as the steering column ran about 2mm away; as a result, I modified the steering linkage to miss the manifolds. After that, I set about making a custom wiring loom to run it, along with a modified home-made ECU. The main problem I had with the build was the wiring, as the original loom had been cut through and trying to wire the M52TU into it was like trying to plug the Millennium Falcon into a brick!” Not something we’ve ever tried, but you see his point – attempting to get old tech to talk to new tech is like taking your granny to a rap battle, and the complexity increases when people have been hacking things about without a thought for future-proofing. Karl’s electrical efforts here are little short of miraculous, frankly.

It was all worth it, though, and with forthright engine comes equally forthright numbers; “The end result was 240hp in a car that weighed bang-on 1000kg, with near-perfect weight distribution,” says Karl. Staggering figures, we’re sure you’ll agree. Brutal stuff – and just for reference, 240hp-per-tonne is the same ratio you’ll find with a supercharged Lotus Elise, or an Audi R8 V8, or – more relevant to our interests – a shiny new M4 with the Competition Package. That featherweight metric tonne was achieved by ruthlessly hacking away all of the sound deadening, even inside the doors (cunningly retaining the door card skins), as well as unceremoniously junking everything superfluous from the interior. While plenty was taken out, a few new bits were added, such as the Subaru seats, which have been partially retrimmed, Willans five-point harnesses, a deep-dish Momo steering wheel and the headlining and sun visors have been trimmed in sexy suede.

Of course, power alone wouldn’t do and the rest of the E30 needed to be upgraded to match this newfound performance. “I knew with the amount of power-to-weight I was running I’d have to step up the braking system and suspension,” Karl explains. “I achieved this by fitting 325i rear arms with a disc conversion, and a 325i front braking system with custom-made forced air ducting,” and this set up offers ample stopping power to match the ample grunt from that engine.

You wouldn’t know just how much performance this E30 is packing to look at it, would you? The element of stealth was deliberate, of course. “I loved the look of the E30 just as it was, so I was dead set on doing all my modifications without really touching or modifying the exterior,” says Karl. “I was almost going for a retro sleeper look, with modern wiring and running gear.” The efforts in this area have evidently been a resounding success, and after a solid nine months of graft, doing all the work on the car by himself along with the occasional assistance of a few brave friends, this crumbly barn find has been utterly transformed. And there’s no doubt in Karl’s mind what the best bit is: “The engine,” he laughs. “It pulls like a train, and the sound that comes from that six-cylinder at 8100rpm turns a lot of heads.”

This, then, is how a seemingly dead E30 goes from zero-to-hero in under a year. A genuine barn find, reframed as a stealthy track-slayer with a focus on pure function, with sublime classic aesthetics to boot. Yet more evidence that you should never underestimate the more-door and, most importantly, proof that barn finds do still actually exist. You’ve just got to hope you stumble across one by chance, rather than actively seeking them out – the element of surprise is half the fun.

THANKS I’d like to thank all my friends who have helped me along the way, and my other half for not killing me and putting up with my boring car talk

“It pulls like a train, and the sound that comes from that six-cylinder at 8100rpm turns a lot of heads” 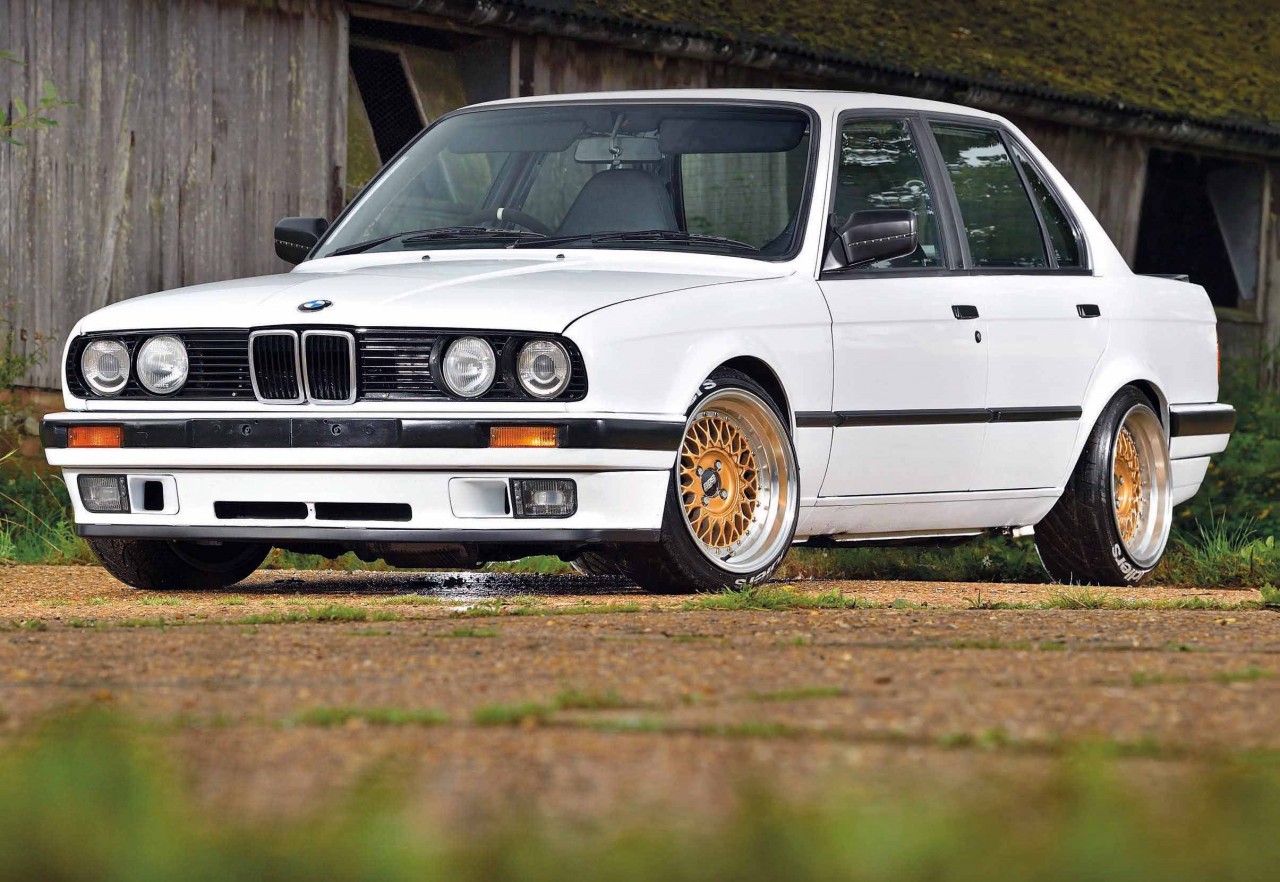 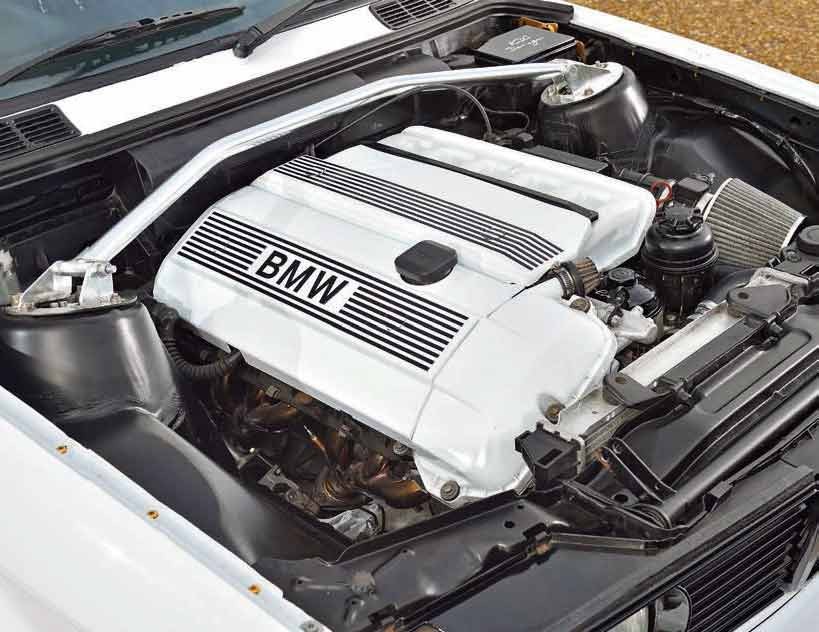 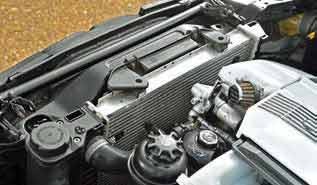 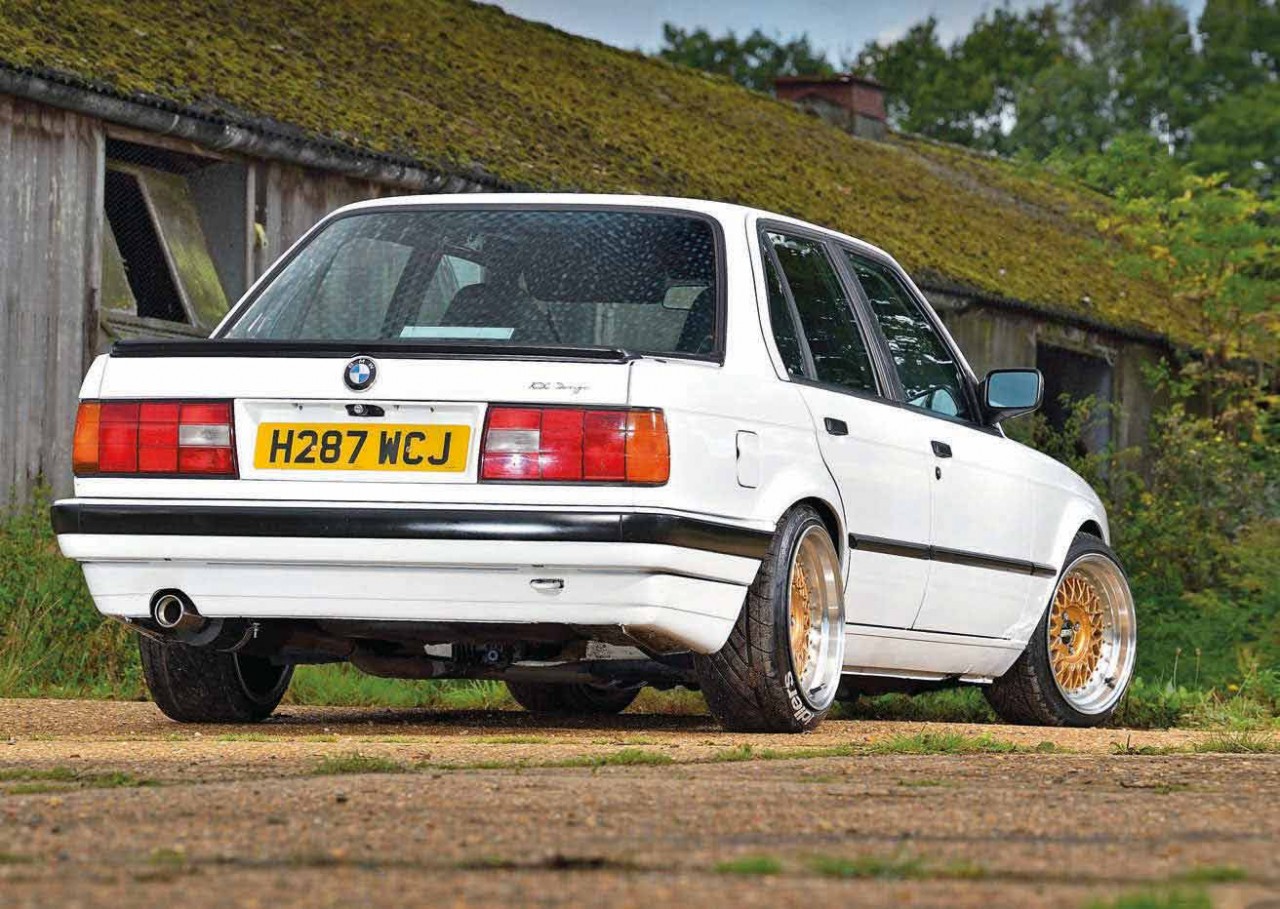 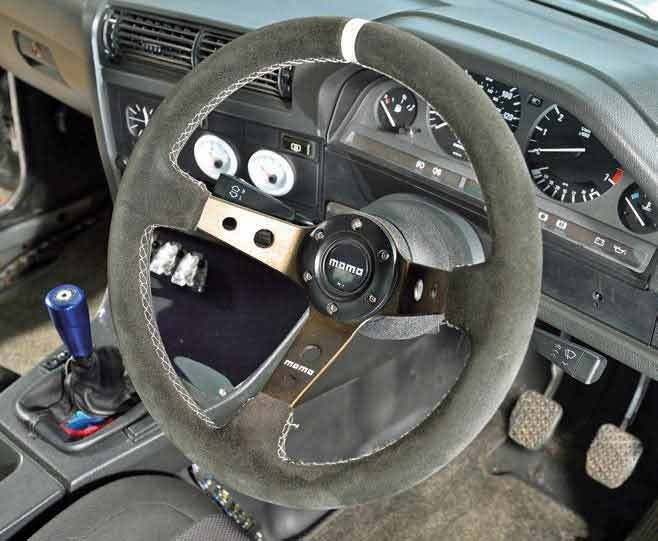 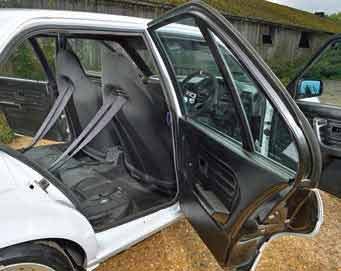 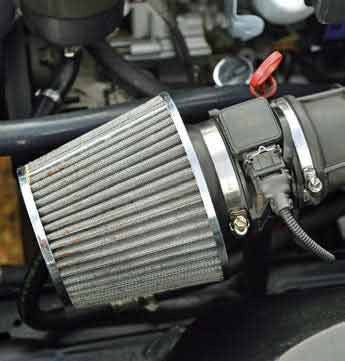 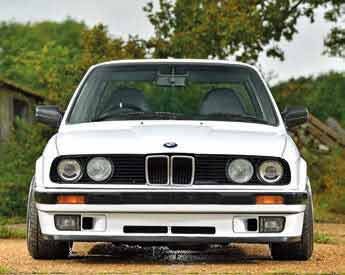 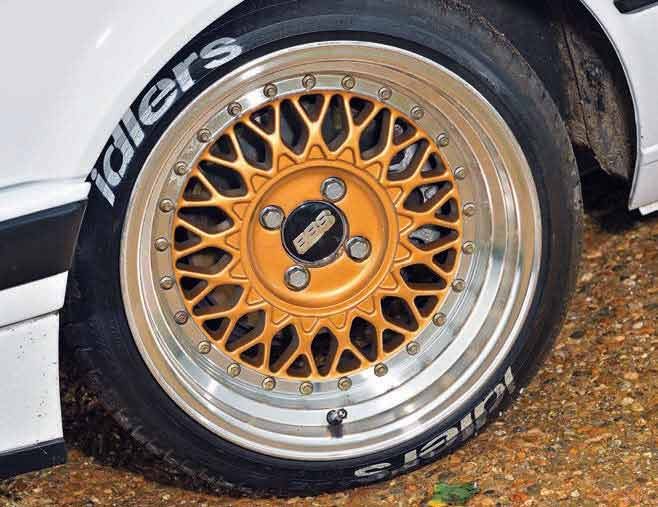 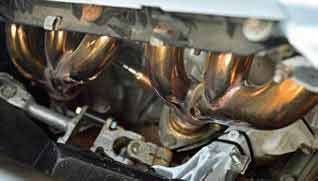