Leighton Buzzard, 2010. Mild-mannered delivery driver, Rich Gibson, was munching miles on a work errand. That’s when he saw it. As a lifelong retro Vauxhall nut, he knew the Calibra he was looking at was something special. After all, he’d spent the previous decade cruising about in a V6-powered version of the aerodynamically superior Griffin. There’s not a lot the man from Mexborough doesn’t know about the Mk4 Astra Bertone Coupe’s predecessor. 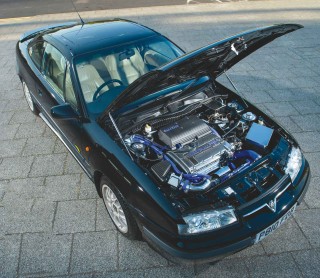 He turned tail. This opportunity might not present itself again. Responsibilities to his employer temporarily forgotten, he resolved to follow wherever the cool Calibra led. Before long, the beautiful black Vauxhall came to a halt in a supermarket car park. Rich bolted over to meet the owner. “I was first drawn to the car after eyeballing its glossy black paintwork. As I got closer, I could see I was looking at a rare Turbo LE.”

To understand why the LE is a big deal, we’ll need to drop back into Calibra history. First launched as an Opel concept as the 1990s drew near, the rounded coupe took the ageing Manta’s boxy, butch styling and binned it. In its place, General Motors offered dependable Mk3 Cavalier (Vectra A, if you’re being picky) underpinnings, industry leading aerodynamic efficiency and minimalist styling. Even in this, the model’s thirtieth year, the Calibra looks seriously on point.

OUT WITH A BANG

When production hit the buffers in 1997, Vauxhall resolved its range topper wouldn’t go quietly. Based on the 204bhp C20LET-powered Turbo, the LE (Limited Edition) runout model struts with an Irmscher rear spoiler, body-coloured door plastics, suspension 35mm lower than stock and a set of sixteen-inch BBS RX alloy wheels finished in a soft shade of gold named Champagne. Opel Motorsport badges flashing from the tailgate and both doors hammer home the Calibra LE’s status as a very special Griffin.

Inside, the high-end machine drops its driver in the lap of luxury. Forget the proletarian family car underpinnings. This Calibra peacocks with cream leather, a steering wheel trimmed in grey leather, air-conditioning and heated front pews. A discreet oval badge – mounted ahead of the gear stick – boasts of the LE’s strict production run. Yep, these late-model beauties remain the rarest of the rare, with only fifty-one units produced. Rich was in pursuit of car number four. Three weeks later, it was his.

Our fairytale now takes a less exciting turn. More than fifteen years into its long life, the fourth LE built was suffering the effects of a rusty bonnet, missing BBS centre caps, a bust third brake light and an engine bay you wouldn’t want anyone to see. Pressing the force-fed fourby into daily driving duties, Rich wasn’t fussed, but after a while, the minor imperfections started to mount.

“After two years,” he explains, “I started to right some of the car’s wrongs, but it’s not in my nature to remove an item, fix it and put it back unaltered!” Indeed, he carefully cleaned every part he touched on the way to removing a suspect component. Little by little, the LE had tricked him into a rolling restoration. “Nothing ever actually broke,” he laughs. “Nevertheless, I felt I had to keep removing, restoring or replacing every one of the car’s components!”

A professional respray didn’t quite produce the results he’d hoped for, leading the bearded Calibra fan to embark on an intensive course of automotive amelioration. The scale of the task quickly became clear; as soon as he’d plucked the engine, transmission and steering system from the car – work in preparation of an engine bay refresh – he realised he had much to learn before he could make serious progress. Not one to be deterred, he sat in front of his laptop and watched every available instructional video YouTube could provide. “With knowledge gained from online films and help from friends, I was able to strip the engine bay to bare metal, repair all visible corrosion, smooth the turret tops and spray to a clean finish.” 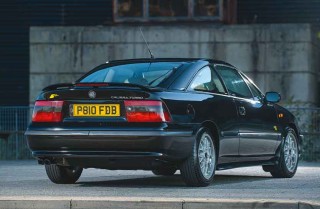 Now it was time to let the turbocharged Red Top shine. Literally. Keen to create visual impact without compromising mechanical originality, Rich curated a selection of polished metalwork for the two-litre powerplant. TX Autosport provided the exhaust downpipe elbowing its way through the front-lower section of the engine bay. The same company delivered a polished oil dipstick and breather tube. Roose Motorsport was the source for a collection of bright blue silicone fluid and air transfer hoses, while every bracket has been powdercoated or polished. Additionally, every bolt has been replaced with a shiny stainless or chrome item.

Rich’s resourcefulness even allowed him to procure Pro Alloy parts. The power assisted steering fluid tank was an online find, whereas the expansion tank was one of three parts tucked away in the manufacturer’s storage room. In the years since, this LE’s engine bay has become even more ornate, gaining blue ‘Turbo’ lettering on its top hat cover, flocked lettering on its polished spark plug cover and an Imperial Performance custom exhaust heat shield. Rich hasn’t skimped on steering either; every seal has been renewed and bolstered by the addition of Powerflex power steering system polyurethane bushes. As an extra nod to excellence, the work is capped by the very last no-longer-serviced new-old stock Calibra bonnet Vauxhall had in stock.

This is now, but back then, the restoration mission saw Rich strip the car’s underseal with a drill and wire brush. The floor pan then came in for attention, gaining a new layer of stoneguard before paint and lacquer. It was, however, the running gear which gave Rich the chance to excel. Piece by piece, he acid-dipped and powdercoated each suspension component, adding replacements and the mildest upgrades where needed. Tired standard dampers have been swapped with OEM-spec Bilstein B4 shocks. EBC Brakes discs and pads are slotted into rebuilt standard calipers. Every nut, bolt and bush is new. 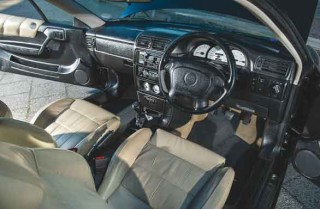 Speaking of bushes, the LE’s camber bushes are model-specific, contributing to a 35mm lower stance than standard. Rich managed to locate a set from a native of Carlisle who’d had the parts in storage since the 1990s. Rich also managed to source the last new genuine rear top stabiliser arm bushes available anywhere in the world. Quietly snoozing in the back of an Opel dealership in Germany, they were shipped to the UK to help complete the refurbishment of this cool Calibra.

There was still work to do before the car could hit the road. Working in his garage at home, Rich installed new seals in the differential, returned the propshaft and heat shields to factory fresh specification, overhauled the fuel system with a new pump and fluid transfer hoses, restored an OEM Philips SC804 head unit and commissioned the fabrication of a stainless steel exhaust system matching the bore size of the standard pipework. Never one to leave a stone unturned, this LE’s dedicated owner even sprung for a set of genuine floor mats and then had a replica set made to preserve the life of the originals!

Polished and preened, the finished Turbo has fast become a media darling. September 2014 saw it faceoff against its period adversaries in a Practical Classics magazine group test before Modern Classics treated the car to a feature-length profile. All concerned confirmed the drive absolutely lives up to the looks. 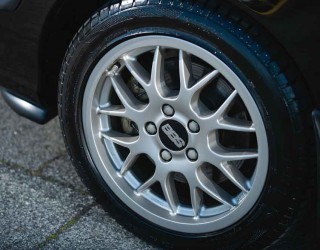 Show attendees from across the UK are equally enamoured with this rare Vauxhall. 2016’s VBOA National Rally saw the car coin the Treasurer’s Cup for best post-1990 car in show. ClubCalibra.net’s Best in Show award followed. A gong for Best Modern Retro at Kendal’s Total Retro Show further finished the trophy cabinet in 2018. “It’s a car capable of generating a big reaction wherever it goes,” smiles Rich. From the white LEDs illuminating the dash to the polished camshaft and timing belt covers, the love he has for this legendary LE is writ throughout. He even extended his garage in order to make the project a reality. “Every now and then, I get a tad giddy,” he grins. “On New Year’s Day, I decided to take the car for a quick spin around the block. I ended up racking up loads of miles over the course of a number of hours!” Proof, if proof be needed, that nine years after he first encountered his black belter, it’s a classic Vauxhall continuing to urge him along the extra mile.

THANKS ClubCalibra.net for support and help throughout the project, Stephen Davies, Ally Mcvittie and Steve Cracknell for helping with the engine bay rebuild, Steva Armstrong for helping me to paint the engine bay (and for all his pestering!), Autovaux for sourcing parts, Craig at Powder Precision UK for the blasting, acid-dipping and the perfect powdercoating

There’s a lot of love out there for Red Tops, be they turbocharged or naturally aspirated. Sixteen-inch BBS RX alloys are standard equipment.

HE EVEN EXTENDED HIS GARAGE TO MAKE THE PROJECT A REALITY

WORST THING ABOUT YOUR CALIBRA LE To be honest, there’s nothing I dislike about the car