Another month, another new Porsche to get excited about. Unlike the recent Carrera 4S Belgian Edition (largely a stying exercise paying tribute to Le Mans hero, Jacky Ickx), however, the latest powerhouse of performance to roll out of Stuttgart is a distinct model entry in the 992 line-up. In fact, it’s the one we’ve all been waiting for — the range-topping 911 Turbo S. Porsche’s plan to reveal the car to an expectant public at the 2020 Geneva International Motor Show was scuppered when the event was cancelled due to the Swiss government’s concerns regarding crowded places and the spread of COVID-19. Instead, an innovative online presentation hosted by Porsche brand ambassador and ex-F1 ace, Mark Webber, showcased the new 911’s qualities, which centre around a new 3.8-litre flat-six bolstered by two turbochargers delivering almost 70bhp more than the outgoing Turbo S. Torque is up to a whopping 590lb-ft. 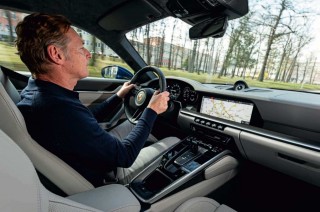 The eight-speed Porsche Doppelkupplung (PDK) double-clutch automatic transmission has been custom-tailored to transfer the higher torque forces of the Turbo S. Overall, the yardstick sprint from 0-62 mph now takes just 2.7 seconds (a reduction of 0.2 seconds), while the top speed is unchanged at an licence-baiting 205mph.

Helping to plant that power to the road, the car’s track is increased 42mm wide at the front and 10mm at the rear. Furthermore, for the first time, the Turbo S transfers its power to the road with mixed wheels and tyres in two different sizes (twenty-inchers with unique 255/35 black circles at the front and 21-inch wheels with 315/30 rubber at the rear). The centrelock alloy wheels are a new design.

Adaptive electronics include cooling air flaps in the nose, with a larger rear wing generating higher levels of downforce and aerodynamic pressure than previously seen on the 911 — the pneumatically extendable front spoiler and the larger surface area of the rear wing deliver fifteen percent more downforce than the previous 911 Turbo S.

But what of that engine? The completely new six-cylinder beating heart of the Turbo S is based on the unit powering the 992 Carrera range and boasts the largest leap in performance ever achieved in the history of turbocharged production 911s. Helping deliver this hike in power is a completely redesigned charge-air cooling system (radiators which water-cool air after it passes through the turbochargers before entering the engine), which features a larger chargeair cooler to improve efficiency.

The engine benefits from a new high-flow intake system. The previous routing of engine intake air and charge-air cooling was swapped around: part of the induction air now flows through the characteristic Turbo inlets in the rear quarters. In front of the air filters (now situated in the rear wings), two extra airflows have also been incorporated through the grille of the rear engine cover. This means the new 911 Turbo S has four intakes with a larger overall cross-section and lower air resistance, further aiding engine efficiency.

New, larger turbochargers again deploy VTG (variable turbine geometry) to adjust intake boost according to engine speed and load. They’re now mounted in a symmetrical layout, featuring compressor and turbine wheels rotating in opposite directions. The diameter of the turbine wheels has been increased by five millimetres to 55mm, while the 61mm compressor wheel is now three millimetres larger. The wastegate flaps are electrically controlled with stepper motors for faster responses and increased power.

Together with rapid piezo fuel injectors delivering optimised combustion, this leads to significant improvements in the engine’s responsiveness and revving ability, as well as power, torque, and emissions.

One demonstration of the engine’s higher state of tune is the temporary overboost function being no longer required — maximum torque is permanently available in the rev range (2,500 – 4,500 rpm).

The new 2021 Porsche 911 Turbo S 992 can be ordered as either a coupé or drop-top. Both models are available to order from Porsche Centres in the UK and Ireland with immediate effect. The coupé is priced from £155,970 and the cabriolet is yours from £165,127.