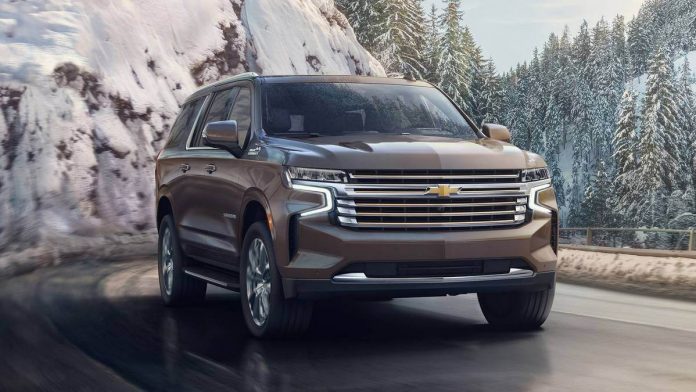 Dating back to 1936, the Suburban is the longest-running continually used nameplate in the auto industry. Almost a century later, the 2021 Chevrolet Suburban is still going strong.

By sharing a platform with the concurrent GM line of pickup trucks, the Suburban was always able to provide a sturdy base for both people and cargo hauling. Although it’s spent most of its earlier years as a station wagon, the modern-day Suburban is a full-bodied SUV; and the largest one the company has to offer as well. As most Chevy nameplates do, the Suburban, too, has mechanical twin stablemates of its own, namely the GMC Yukon XL and Cadillac Escalade ESV.

The 2021 Chevy Suburban is available in no less than six different trim levels, starting from the base LS, over LT, RST, Z71, Premier, and topping with the ultimate High Country models. Most of them are available in both 2WD and 4WD configs, except for the off-road-oriented Z71 models that are, naturally, available exclusively with 4WD. 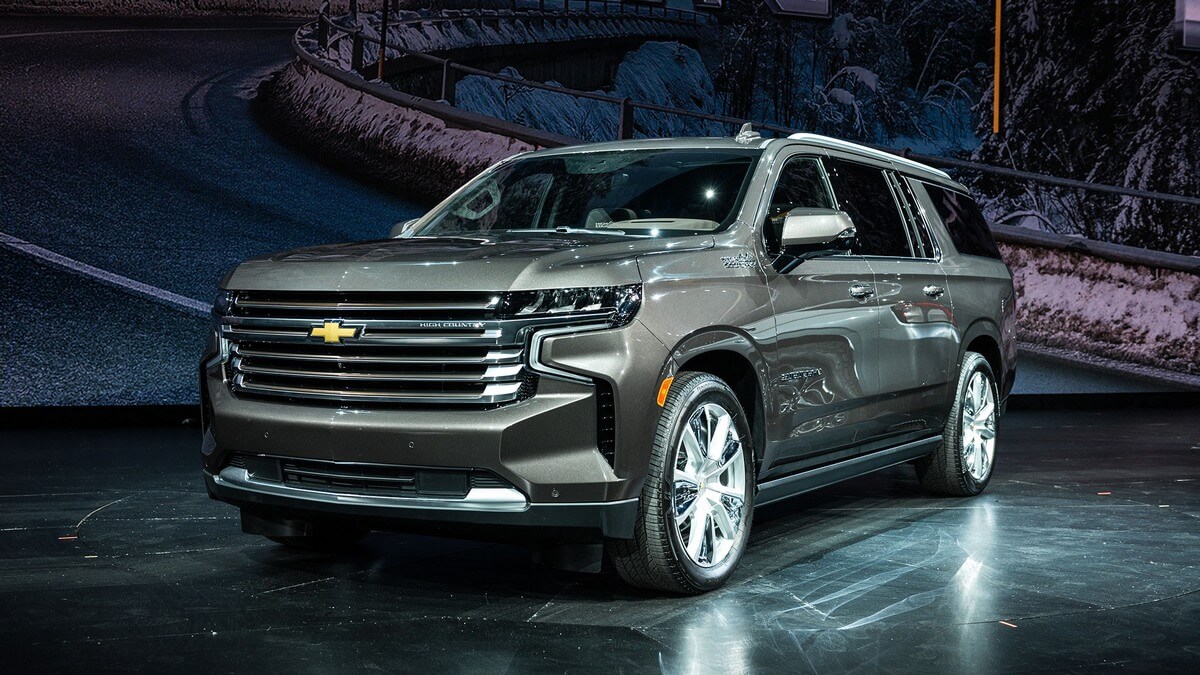 Built on the same GMT T1XX platform as the Chevrolet Silverado and GMC Sierra half-ton pickup trucks, the Suburban is very similar to the slightly smaller Chevrolet Tahoe. While both SUVs can accommodate as many as nine passengers in their base LS forms, the Suburban’s 144.7 cubic feet of cargo room is simply unmatched in its segment.

The passenger and cargo room increase has been made possible mainly due to the switch from a live rear axle to a four-link independent rear suspension. This change doesn’t only improve the SUV’s spaciousness but comfort and handling as well.

The Suburban represents an excellent choice for those in need of a sturdy land yacht with the highest amount of room for passengers and their cargo. Being the largest and one of the more expensive models in Chevy’s lineup, the full-size SUV is also stacked with an abundance of standard convenience and safety features. However, this comes with a caveat; it might be hard to find a sufficient number of parking spots for it. Moreover, the Suburban’s fuel economy is, as expected, poor compared to smaller crossovers.

If you’re wondering what advantages and disadvantages come with each of the 2021 Chevrolet Suburban’s trim levels, here’s a rundown to help you reach a decision.

The entry-level Suburban retains a relatively affordable price tag while still offering all the essential gear you might be accustomed to when it comes to large SUVs.

Most Suburbans come with standard 5.3L V8 and optional 3.0L turbodiesel inline-six mills, and the entry-level LS is no exception. The petrol burner generates 355 hp and 383 lb-ft of torque. It returns either 16 mpg in the city and 20 mpg on the highway in 2WD form or 15/19 mpg in 4WD guise. 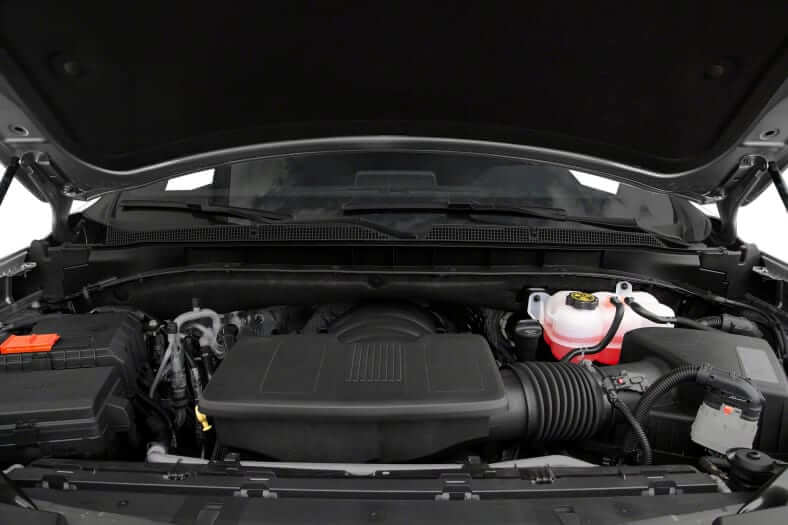 The oil burner, on the other hand, cranks up 277 ponies and 460 pound-feet of twist. It’s also much more efficient at 21/27 mpg for the 2WD or 20/26 mpg for the 4WD, both the best you could hope for in a Suburban. Every model features a modern 10-speed automatic gearbox.

Despite being the most affordable, the LS trim still offers a richly-appointed interior, albeit with cloth seats and a plasticky center console. This is also the only trim level capable of stuffing as many as nine passengers, thanks to the available bench seats across all three rows.

A 10.2-inch touchscreen with Android Auto and Apple CarPlay compatibility is standard from the get-go. So are 8-way power front seats, tri-zone automatic climate control, LATCH system, USB ports front and rear, and 4G LTE Wi-Fi hotspot, among other gear. 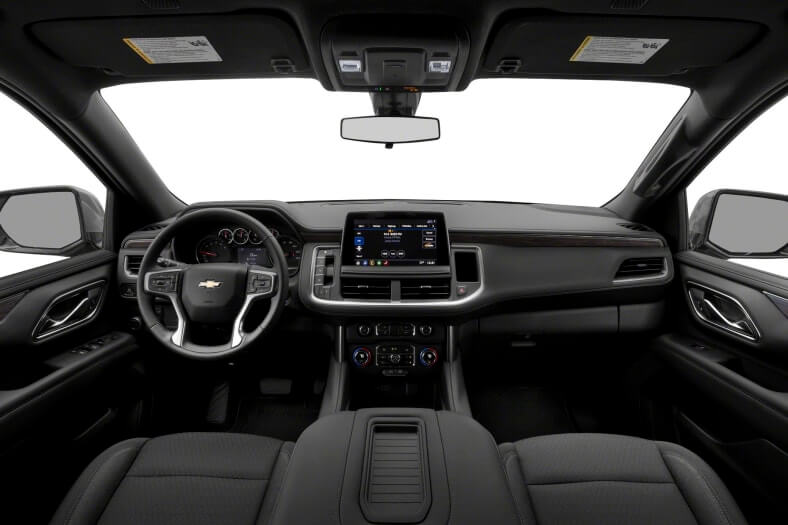 While you can further enhance the Suburban LS by adding a premium cloth seat trim, plenty of features are not available. For instance, you won’t be able to order heated seats, a head-up display, second-row captain’s chairs, power tilt and telescoping steering column, and even the handy new 10-inch power-sliding center console that’s optional across the rest of the range.

As the first upgrade to the base models, the LT trim serves as a great starting point for most families.

Much like the entry-level models, the Suburban LT offers a choice between a burly 5.3L petrol V8 engine and a 3.0L diesel inline-six mill available for an additional $995. A 10-speed automatic transmission is mandatory in both instances, and the fuel economy figures remain unchanged.

Although similarly executed as the base trim, the LT adds 10-way power driver and passenger seats in leather, heated front seats, a Bose 9-speaker audio system, a wireless charging pad, an auto-dimming rearview mirror, and a driver seat memory.

The list of available upgrades is also longer than on the base model. It includes a heated steering wheel, heated second-row seats, leather upholstery for the first two rows, and manual-folding second-row bucket seats.

The $5,000 or so LT Package also adds a panoramic power sunroof and the $2,820 Luxury Package that you can also order separately. Aside from improved convenience gear, the Luxury Package also unlocks the most advanced active safety features, including those helpful when parking the hulking SUV. The rear media and nav package are also available for $2,490, and apart from navigation, it adds a 10.2-inch diagonal color touchscreen at the back.

The safety gear remains largely the same as in base models with the unlocked rear pedestrian alert and HD surround-view camera. 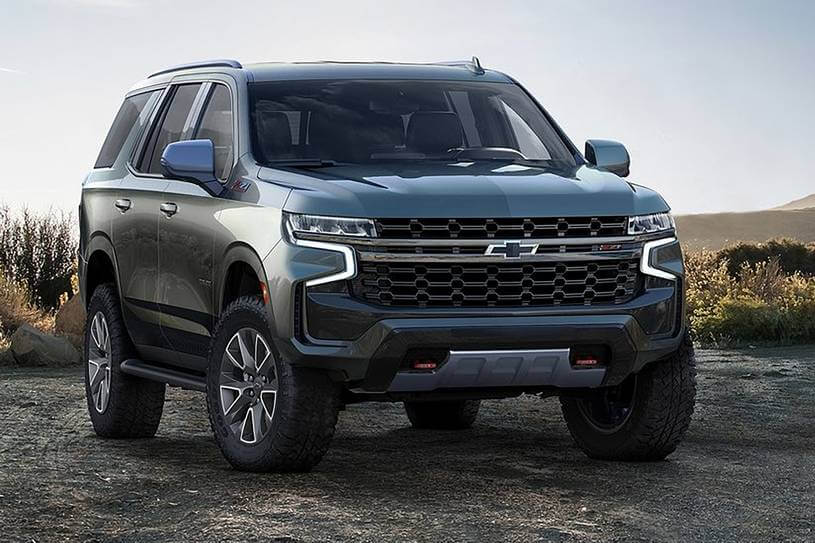 The RST trim still won’t fully load the Suburban, but it will provide some visual enhancements outside. The 22-inch all-season tires replace the 20-inch ones from the LT or 18-inch tires of the LS. The RST also provides standard wheel locks and a choice of nine different sets of wheels – most of which are close to $2,000 upgrades.

There aren’t too many differences between the inside of the LT and RST Suburbans. The latter does come with perforated leather seats, though.

Most of the advanced driver’s aids can be unlocked with the $2,820 Luxury and Driver Alert Package, making the RST and LT trims virtually identical in this regard. 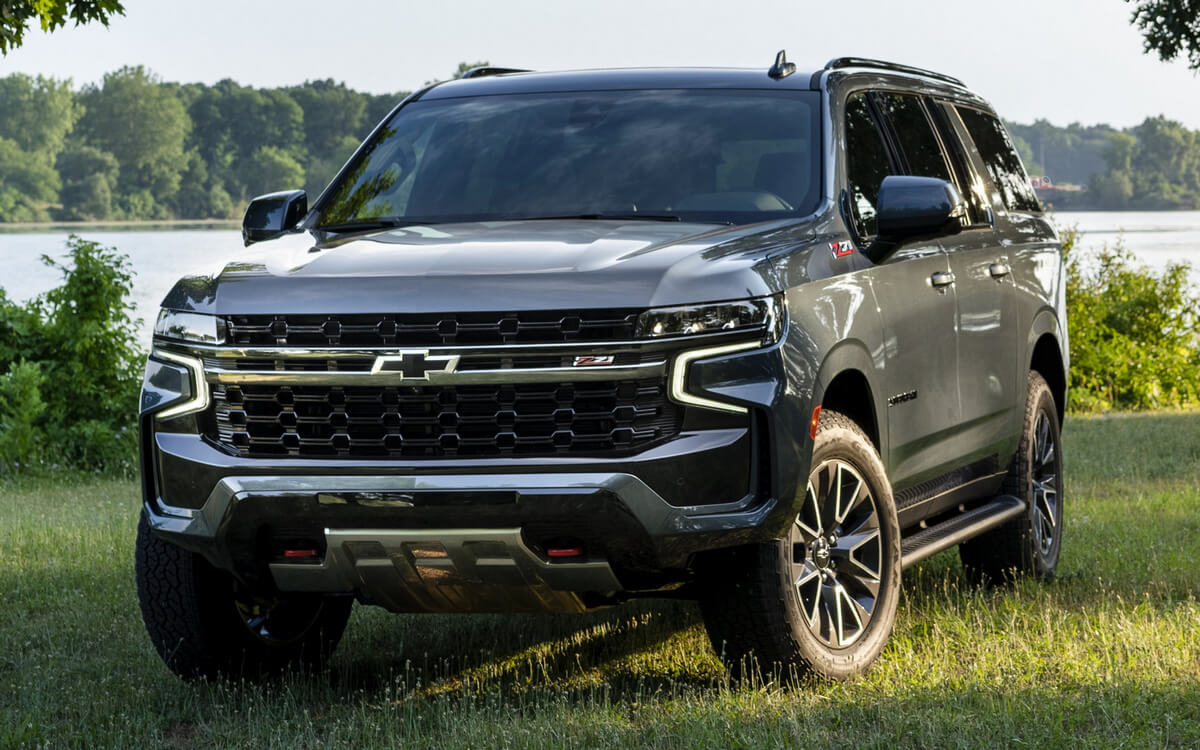 The Z71 trim is the first to tread off the beaten path by being exclusive with a 4WD setup. It’s also slightly different visually as it boasts a high approach angle frontal fascia while reverting to 20-inch wheels.

Another differentiating factor for the Z71 trim is that it’s offered exclusively with the 5.3L V8 engine and 10-speed auto gearbox combo. Furthermore, with its mandatory 4WD, the fuel economy ratings are 15 mpg city and 19 mpg highway.

Leather seats are standard with all Z71 Suburbans, but other than that, everything is more or less the same as in RST models.

Most of the advanced safety features are still only available by purchasing the $2,820 Luxury Package.

The optional Duramax diesel engine is again available for an extra $995, but the base engine remains a 5.3L petro-burning V8. Their ratings and fuel economy figures remain unchanged. Likewise, a 10-speed automatic remains the sole transmission choice. 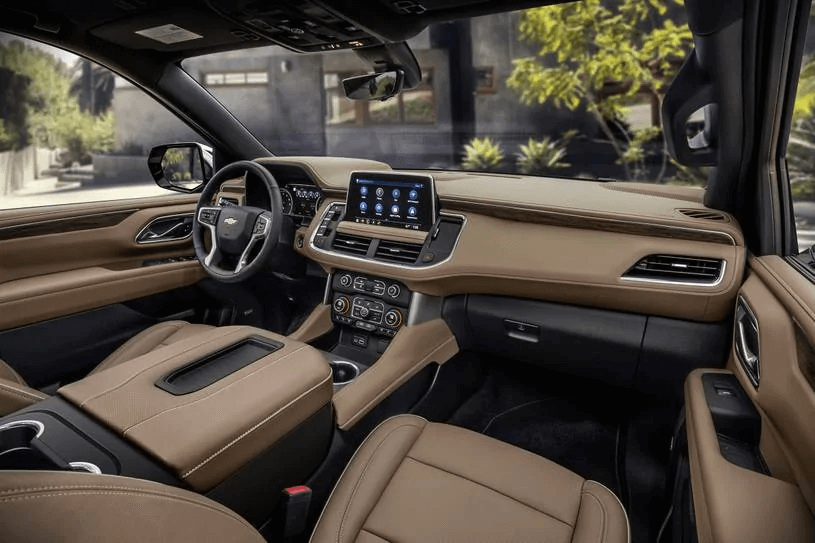 However, some things do change on the inside, where 12-way power driver and front passenger seats are now standard. An option from Z71, the 8-inch Driver Information Center is now standard too. An automatic heated steering wheel is also standard with the Premier trim. So are the premium Bose 10-speaker surround sound system, infotainment with Navigation, heated and ventilated front seats, and a heated second row of seats plus memory settings for seats, mirrors, and steering wheel.

Although many features are standard with the Premier grade, there are still plenty of ways to upgrade. For instance, several Jet Black perforated leather upholstery setups are available at cost. Also optional are the Premium, Texas Edition, and Max Trailering packages for $4,485, $2,000, and $465. Note that the last is automatically included with the Premium Package, but you can order it separately.

Most of the upper echelon driver’s aids are part of the mentioned Premium Package. These include the surround-view monitor, rear pedestrian alert, adaptive cruise control, and enhanced automatic emergency braking that works at all speeds above 2 mph. 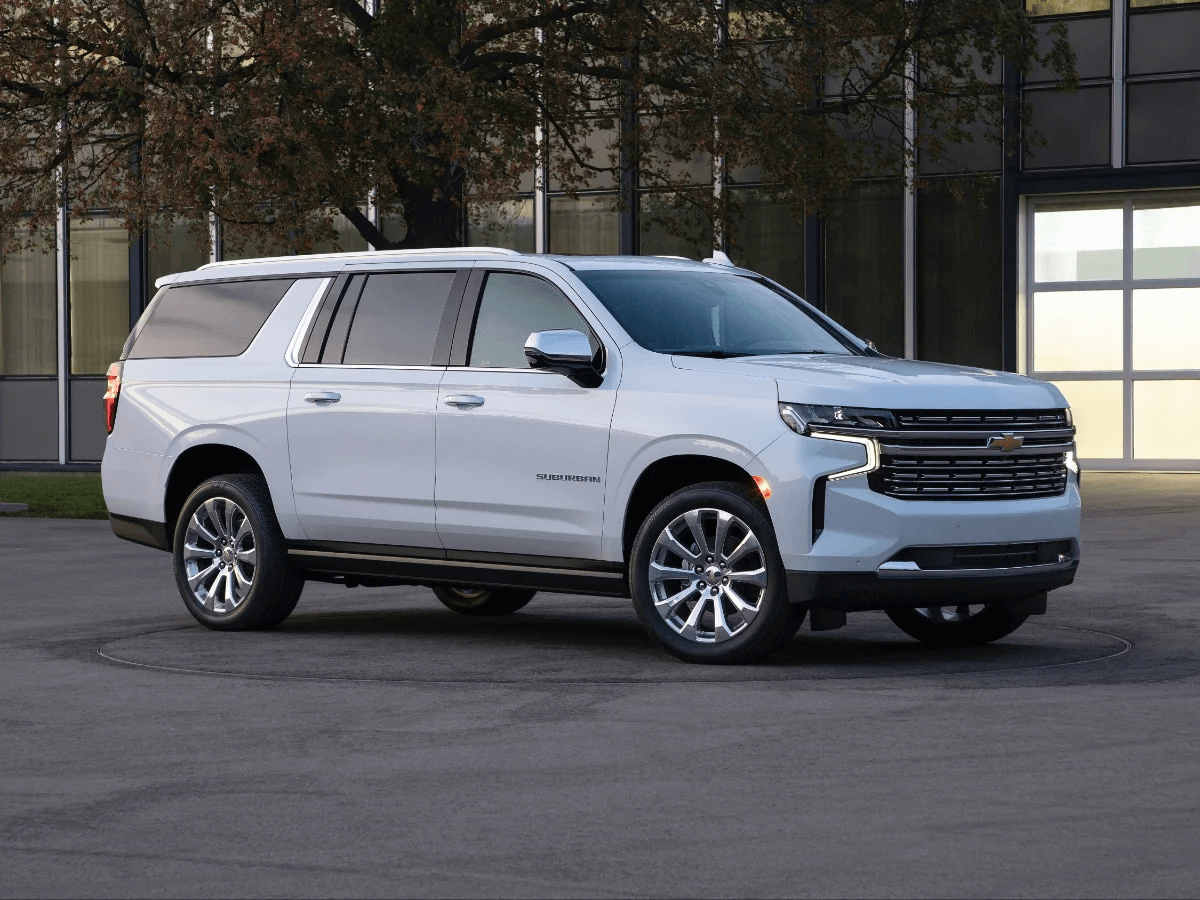 The range-topping Chevy Suburban is both an expensive and capable large SUV. Despite all its strong suits, it needs to be noted that some of its features – namely advanced driver’s aids – are still only available as options while some of its competitors offer them throughout their lineup. What’s more, an entry-level Cadillac Escalade ESV is significantly more affordable than a fully loaded Chevy Suburban. It goes without saying that the Caddy is much more lavishly appointed and even better equipped than its volume stablemate.

Unlike the rest of the Suburban range, the High Country models come with a 6.2L V8 as the base engine. This powerful unit develops 420 hp and 460 lb-ft of torque and pairs with the same 10-speed as the remaining two powertrains. Fuel economy with 2WD stands at 15/20 mpg while 4WD cuts both figures by a single point. The optional Duramax diesel is still available and is actually $1,500 cheaper than the large petrol burner – not to mention much more efficient. 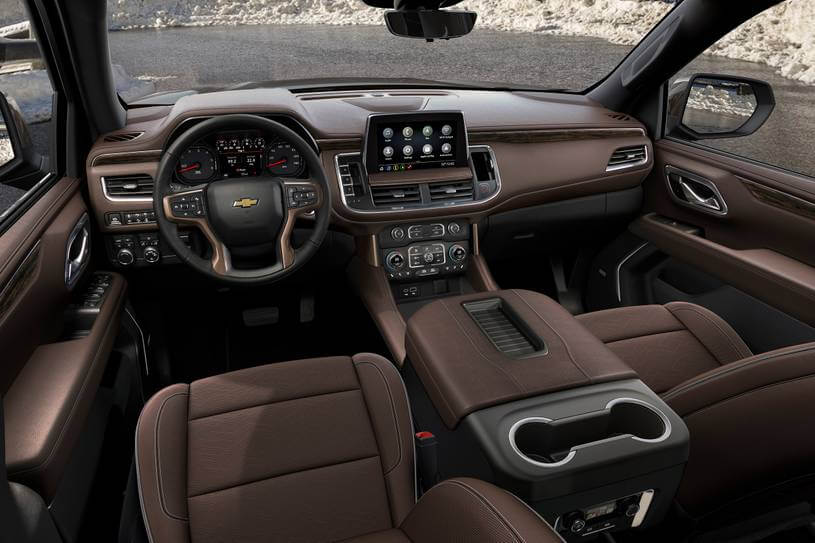 There aren’t many differences between the range-topping High Country and Premier trim’s interior setups. The former does receive a different selection of optional two-tone perforated leather upholsteries alongside a standard HD surround-view camera and a head-up display.

To fully load the Suburban, you can always order the $5,605 High Country Deluxe package, which adds a self-leveling air suspension, panoramic sunroof, and also absorbs the less expensive Premium and Technology packages and their features.

Some of the most advanced driver’s aids like a rear pedestrian alert are also standard with the High Country trim. However, adaptive cruise control and enhanced automatic emergency braking have to be ordered separately via a $3,355 Technology Package.

Performance Upgrade Package (available in all trims with petrol engines)

Rear Media and Nav Package (LT, RST, and Z71 only) 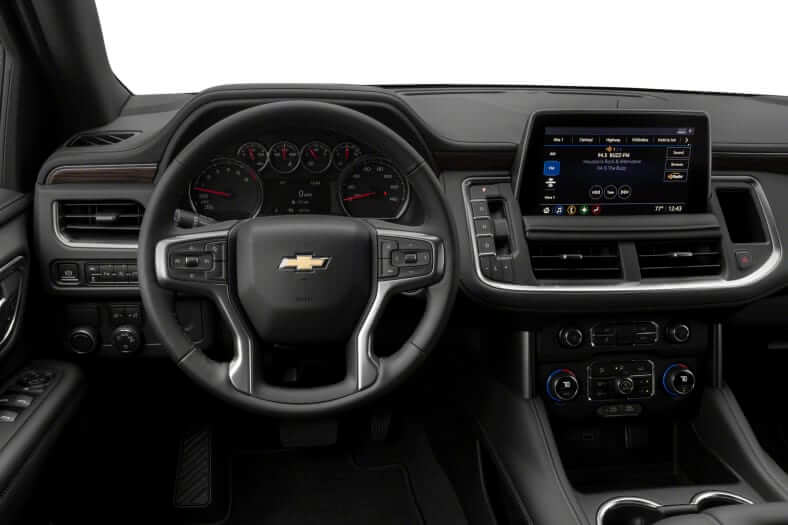 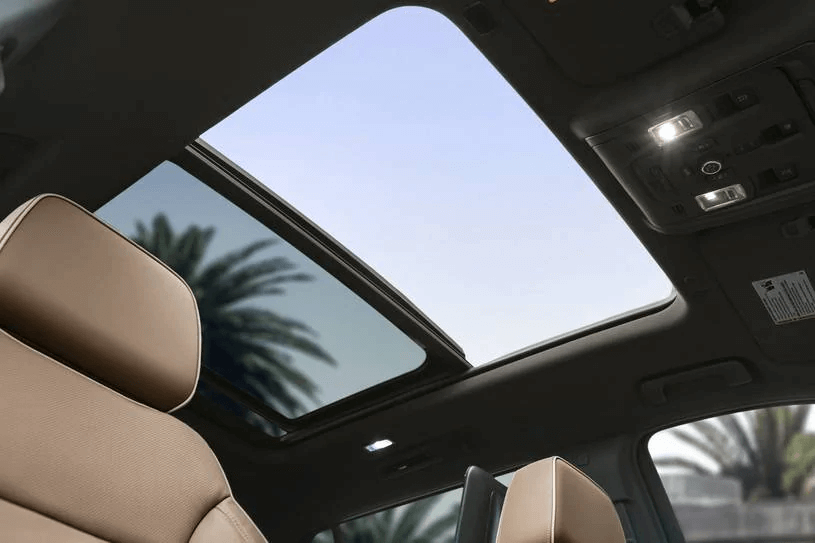 Texas Edition (LT and Premier only) 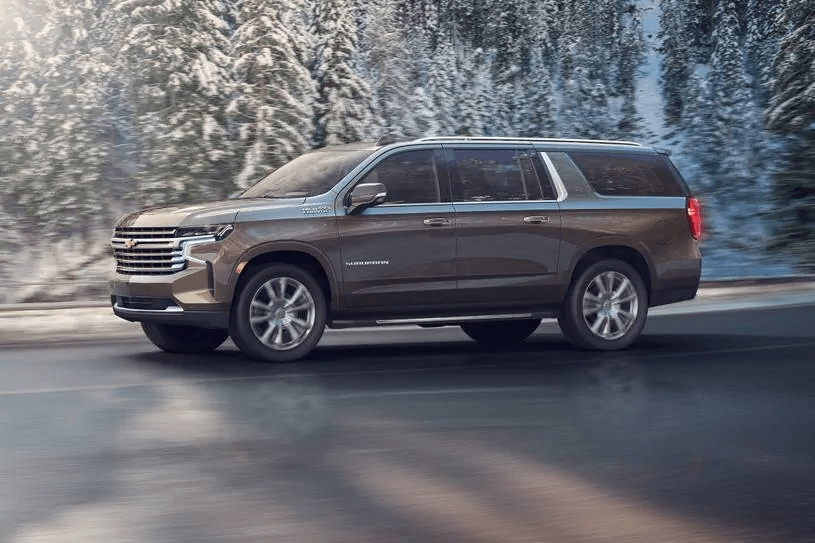 The 2021 Chevrolet Suburban offers the biggest amount of cargo space in its class: 144.7 cubic feet with the second and third rows folded, 93.8 cubes with the third row folded, and 41.5 cubic feet behind the third row. 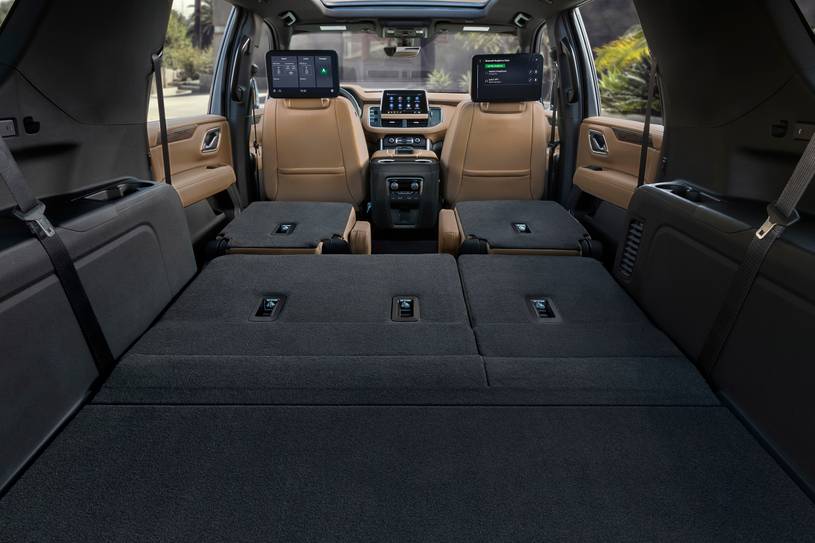 The Suburban can tow up to 8,100 lbs if equipped with the Max Trailering Package.

The body-on-frame full-size SUVs of old might not be the most popular people and cargo haulers anymore due to their usually dreadful fuel efficiency, but that doesn’t mean they’re becoming a dying breed like wagons, for instance.

Spacious beyond imagination, the largest Chevrolet vehicle on the market (not counting the HD trucks) still has plenty to offer in terms of utility and capability. Moreover, it’s stacked with both modern convenience and safety gear and provides plenty of bang for your buck if outfitted the right way.

With its 460 pound-feet of torque and more than respectable fuel economy, we’d strongly recommend the Duramax diesel as your engine of choice.

The range-topping trims’ high price tags hardly justify any lack of luxurious trim inside and the fact that adaptive cruise control and enhanced automatic emergency braking never come as standard is just one more reason to bail on them. The best choice would probably be the LT or RST trims with an additional package or two tailored to suit your needs.