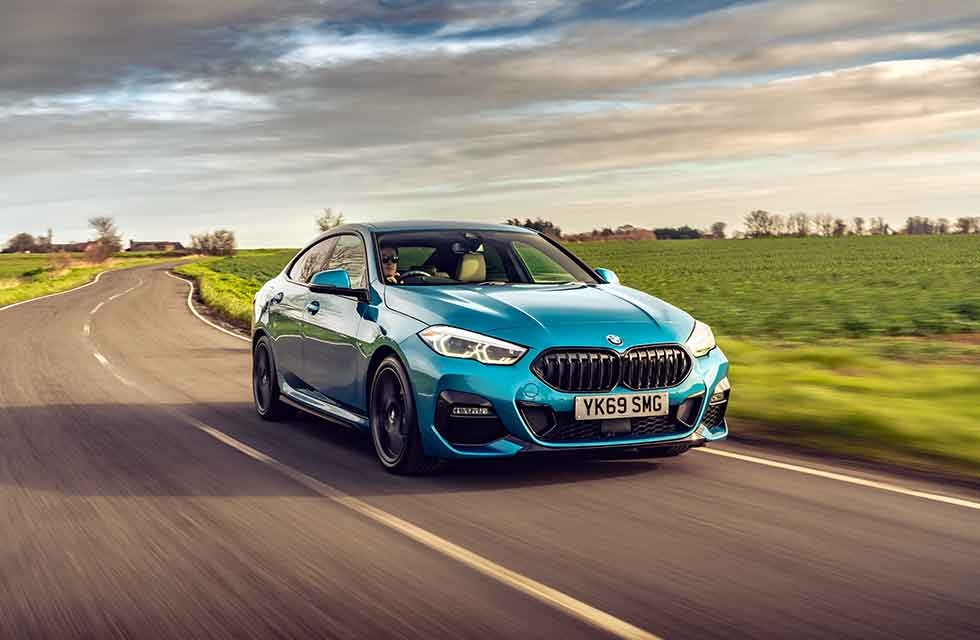 Forget the coupé pretensions and instead look at the 2 Series Gran Coupé as the junior saloon of the BMW range – then it begins to make a lot more sense. We drive the entry-level model on UK roads… Words: Shane O’ Donoghue. Photography: BMW AG.

I’m a sucker for an online configurator. And BMW’s is pretty decent. So, in the name of research for this article, and having driven the entry-level 218i model in right-hand drive, I spent some time playing with the configuration of the new 2 Series Gran Coupé. Maybe a little too much time. Maybe it would be my ‘specialist subject’ if I ever went on Mastermind. Anyway, it was an illuminating experience for someone that, I’m ashamed to admit it, sometimes lives in a bubble of highly specified official media test cars…

Saying that, and given that the Gran Coupé has the lowest starting price of any BMW 2 Series model (don’t forget, the range still features the two-door Coupé and Convertible, plus the Active Tourer and Gran Tourer people carriers), it shouldn’t be a complete shock to see analogue dials (remember those?) and cloth seats in the basic version. To be fair to BMW, I’m being a little facetious, as the entry-level instrumentation on the 2 Series Gran Coupé is a good deal fancier than bog standard analogue clocks of old. It looks almost completely black until you turn the engine on and then it looks sharp and crystal clear. I don’t mind admitting that there’s a lot about this design that I prefer to the latest generation of digital dashboards from BMW.

The oddly shaped speed and rev gradients in the latter don’t get old-fashioned needles, which, as I may have mentioned a few times in these pages, makes them difficult to read at a glance. And what’s more, while BMW’s rivals have implemented similarly swish digital instrumentation, most of them come with more customisation, whereas BMW has been very restrictive in the layout of the dials (this is the case across the whole range, from 1 Series to X7). Hence, it’s a breath of fresh air to see the simple (nearly) round dials that come as standard.

Unfortunately, if you feel strongly about such things in the 2 Series Gran Coupé, that means sticking with the cheapest trim level, Sport, which also has a smaller touchscreen and makes do with an older generation of the iDrive software. And while it’s relatively well-equipped (it gets dual-zone climate control, touchscreen infotainment, Bluetooth telephony and USB port, cruise control, front and rear Park Distance Control, automatic lights and wipers, sports seats and a three-spoke multifunction steering wheel among much more as standard), many will find it a little demure looking, especially when they click on over to the M Sport version on the aforementioned configurator.

Immediately, this has a lot more presence, even if you avoid the popular M Sport Plus package (an extra £2,200 for tinted rear glass, a set of sportier looking 18-inch wheels, M seat belts, a Harman Kardon sound system, a rather unnecessary M rear spoiler and Extended Shadowline exterior trim, which blacks-out the grille and the exhaust, essentially). The Sport’s 17-inch five-spoke rims are binned in favour of an 18-inch design on the 2 Series Gran Coupé M Sport, and it works with the lower M Sport suspension to better fill the wheelarches, for a start. Perhaps just as effective is the slight restyle of the kidney grille, which gets vertical Satin Aluminium struts in the M Sport version. The icing on the cake is provided in the forms of beefier bumpers front and rear and even sporty side sill covers. Even if you go for one of the more daring paint colours on the Sport model, it cannot compare.

Speaking of the exterior finish, may we suggest that you seriously consider one of the darker hues? We’re big fans of BMW’s bright palette of colour options (Melbourne Red, Misano Blue and Snapper Rocks Blue never fail to turn heads), but we reckon that most controversial aspect of the 2 Series Gran Coupé’s design is the black piece of trim that joins the rear lights with the BMW roundel in the middle. Maybe don’t focus too hard on the side profile either. But you can’t do much about that. You can, however, make that ugly trim piece ‘disappear’ by choosing an appropriate paint colour. Shame that the 218i comes with a single exhaust outlet, where as the 220d and M235i get an outlet on each side of the rear bumper. And while we’re on the subject of design, it’s a bit of a stretch to put the word ‘Coupé’ in the name of this car. Sure, its four doors get frameless windows, but that’s about as ‘coupé’ as it gets.

Not, I hasten to add, that that will matter one jot to the target audience. Put simply, the 2 Series Gran Coupé represents the cheapest way into BMW saloon ownership ever (even if BMW doesn’t think of it as a saloon, as such).

Audi and Mercedes-Benz have already proven that there’s considerable demand around the world for such a car, so BMW would be mad not to cash in on it. And while wizened old BMW diehards still can’t get their heads around the concept of a front-wheel-drive car with a BMW badge on the bonnet, they’re not the ones likely to spend circa £30,000 on a new vehicle such as this, even if drive did go the back axle.

The BMW 1 Series hatchback is available in cheaper SE specification, but comparing like-for- like, the 218i Sport Gran Coupé is less than £400 more expensive than the 118i Sport, before anyone ticks an options box. That’s all but irrelevant in today’s market of PCPs and monthly repayments and, so long as the styling of the Gran Coupé doesn’t offend you, why wouldn’t you go for it? The badge number and ‘Gran Coupé’ epithet give it more cachet, while the frameless door windows give the owner an extra feel-good factor.

Inside, the cabin is much the same as that of the 1 Series, which on the whole is no bad thing. The 2 Series Gran Coupé Sport gets an unusual upholstery finish as standard – described as Cloth Nivala/Sensatec – which is a little rough to the touch, if quite high-tech in appearance. The M Sport model comes with Dakota leather by default, which is much preferable. In terms of practicality, the Gran Coupé’s boot trumps the 1 Series hatchback’s official capacity (430-litres versus 380-litres) and that of the outgoing 2 Series Coupé proper, too. The Gran Coupé also gets 40:20:40 split-folding rear seat backs that can be operated from inside the boot, while rear seat space is usefully better than in the two-door 2 Series Coupé, as well.

At the time of writing, the UK-market F44 2 Series Gran Coupé line-up consists of the two launch models we sampled at the international media presentation of the car (220d and M235i xDrive) and the one pictured here, the 218i. Power comes from a three-cylinder 1.5-litre unit we’re quite familiar with, using turbocharging, Valvetronic variable valve timing and Double-Vanos variable camshaft timing to release 140hp and 162lb ft of torque.

What the tech specs sheet doesn’t tell you is that, other than a little judder on start-up, this engine is turbine smooth and its exertions are heard in the distance rather than intruding on the serenity of the cabin. As evidenced by the 0-62mph time of 8.7-seconds, it’s not slow, though it’s at its best when ambling around. Well, it is when paired with BMW’s seven-speed Steptronic dual-clutch automatic gearbox. We’d really like to try it with the standard manual transmission, as it could be a bit of fun – plus it drops the weight by 25kg.

From behind the wheel, the 2 Series Gran Coupé is not exciting, or even interesting, to be honest. It is very capable, very polished and refined, too. The damping feels worthy of the BMW badge and body control is perfectly acceptable, but in this guise, it never encourages you to take it by the scruff of its neck and go seek out the long way home. You’ll have to spend a lot more time on that configurator to bring this car to life. But we don’t think that’ll hamper its prospects one little bit.