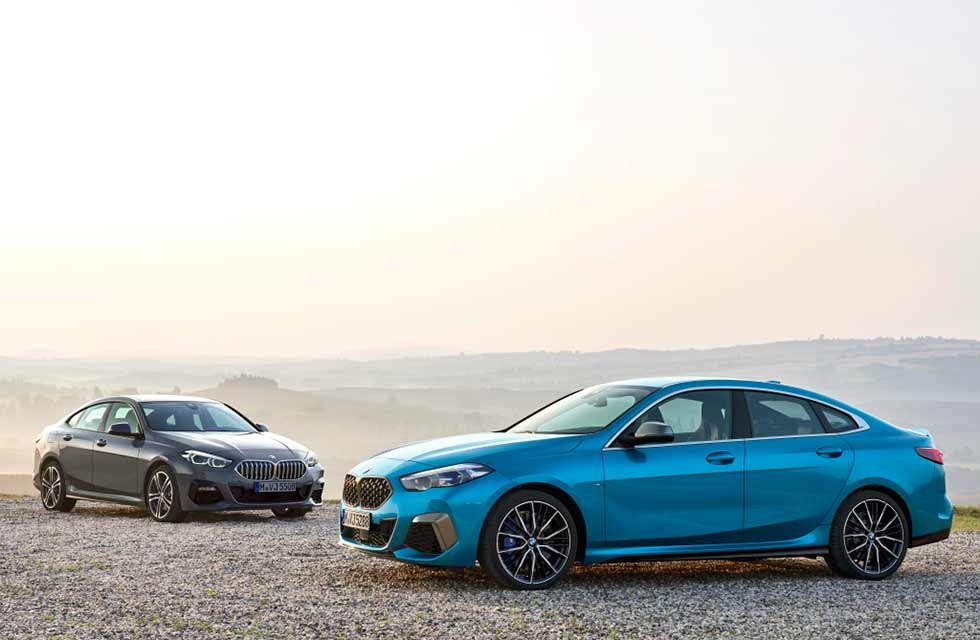 As BMW’s desire to explore every possible niche in the automotive world deepens, so the existing model lines get spun off into ever-new and more adventurous avenues. And here’s the latest: it’s the first four-door 2 Series we’ve had, going under the Gran Coupé epithet to tie it in with its bigger relatives, the 4 Series Gran Coupé, now-defunct 6 Series Gran Coupé and the new 8 Series Gran Coupé. No, we’ve not forgotten the MPV versions of the 2 Series, in the forms of the Active (F45) and Gran Tourers (F46); but as they were almost models apart from the F22 and F23 Coupé and Convertible 2 Series, which just so happened to come under the ‘2 Series’ banner out of convenience more than any mechanical similarity, we’re inclined to forget those. Anyway, they were five-door vehicles…

This 2 Gran Coupé’s codename of F44, however, does tie it in with the 2 Series MPVs, because it – like they were – is front-wheel drive. It sits on the same chassis architecture as the third-generation ‘F40’ 1 Series and, of course, the MINI family, and while there are a few models with xDrive four-wheel drive for both axles, the majority of 2 Gran Coupés will indeed be driven from the front.

Four frameless doors and a swooping roofline from the 4 and 8 Series Gran Coupés are the visual hallmarks of the F44, which has arrived before any 2 Series Coupé or Convertible siblings have broken cover. But, and we’re trying to be diplomatic here, the styling is easily the 2 Gran Coupé’s worst point. It is not a vehicle that has won universal appeal from onlookers for its design. In fact, it’s hard to think precisely who will like it, although the Chinese and Middle East markets are expected to lap it up. Nevertheless, Europe is slated to account for one third of the 2 Gran Coupé’s annual sales numbers and, to our eyes, it’s an unremittingly ugly car. There’s too much metal above both the wheel arches, the front-end details are too large and oversized for the rest of the car, the rear is needlessly fussy and a set of what are still rather big 18-inch alloys look completely lost when they’re bolted onto the 2 Gran Coupé. Adrian van Hooydonk, BMW’s design boss, has said that ‘good’ design should generate a response, even if that response is unfavourable; well, maybe by that yardstick, the 2 Series Gran Coupé is a piece of good design, then.

Moving on, as looks are wholly subjective and you might vehemently disagree with us regarding the 2 Gran Coupé, the interior is much better. It has that homogenous look of all modern BMW cabins, with the Live Cockpit Professional digital instrument cluster and the latest Operating System 7.0 for the infotainment making for a dashboard that looks the same as almost anything up to an X7, but it’s beautifully put-together, ergonomically superb and nicely appointed. Naturally, the Gran Coupé’s raison d’être is to offer more practicality than the outgoing F22, which it does with big rear doors for easy access to the second row of seats, where occupants will find there’s an additional 33mm of kneeroom to luxuriate in. Indeed, sitting back there as a six-footer, headroom is good and it wouldn’t be a hard place to spend a good length of time on a journey, although it’s not exactly as commodious as a 3 Series Saloon in there. The 430-litre boot is 40-litres bigger than the old 2 Series Coupé’s, as well.

In terms of the launch range, BMW has three engines lined up for the UK – the three-cylinder 218i petrol, the four-cylinder 220d turbo diesel and then a flagship M Performance variant called the M235i xDrive, which uses the engine and running gear from the M135i and the X2 M35i. Both the 218i and 220d come in Sport or M Sport trims, with a manual gearbox for the petrol and an eight-speed auto only (which is an option on the 218i) for the 220d. Both are front-wheel drive, as well.

Initial impressions of the 220d are good. The 2.0-litre turbo diesel fires into life unobtrusively and has a rich, muted rumbling when it’s in operation that isn’t entirely unpleasant, for a four-cylinder diesel-drinker. On the motorway, the 18-inch wheels of the M Sport specification manage to deal with lumps and bumps in the tarmac very well indeed, although we should add the caveat that our test car had the optional Dynamic Damper Control suspension, to firm up or smooth off the 2 Series as required. Nevertheless, with this, the seamless eight-speed ZF gearbox and the totalitarian sound insulation as well, the 220d M Sport felt great for town driving and motorway work, its manner suitably grown-up and premium. Regrettably, in the corners it’s not nearly so impressive. It handles gamely enough, with OK steering (it’s still way too heavy in Sport mode, though) and a nice balance of body control, but when you start asking serious questions of the chassis, the inevitable, rather-non- BMW-type things start to happen at the limits of grip. As in, you get understeer. Lots of it. Driven in mildly slippery conditions, the 220d’s propensity to lose traction out of tighter corners in lower gears, spinning its power away in a fury of axle tramp, or to plough into bends with that glassy feel under its nose, or to simply roar wide if you open the taps too soon on corner exit, are all traits we’d never associate with the blue-and-white propeller. Of course, no one drives around oversteering everywhere on the public roads, but with the rear-driven BMW stuff it’s nice to know that chassis grace is there if you need it; we did manage to coerce the 220d into some very tame lift-off oversteer, but only by absolutely throwing it into a second-gear left in an awful, hamfisted fashion and having to wade through a lot of push-on understeer, prior to the tail eventually tweaking out of line.

The M235i, then, is a far preferable proposition for the keen marque enthusiast. It is by no means perfect, of course, as it’s still massively stable and grippy, rather than delicate and rewarding, but with some of the drive heading rearwards it manages to even out the 2 Series Gran Coupé’s nose-led tendencies. That four-cylinder engine might be lacking two-cylinders, in the traditional Munich sense, but it’s a great powerplant, with lag-free power delivery and impressive reach. It makes a decent noise, too, albeit one that is augmented to a significant degree, but the M235i’s real skill is that it preserves all of the 220d’s day-to-day civility, while layering on a substantial level of most welcome driver engagement on top. Sure, at £37,255 basic, it’s not exactly cheap, but it’s less than four grand more expensive than the 220d and it feels a much more invigorating car.

As ever with these new niche models, though, we’re left slightly confused by the 2 Series Gran Coupé overall. Until any two-door versions of the F4x generation of this model come along, it serves more of a purpose in BMW’s compact portfolio, as there are no Coupé nor Convertible alternatives to fall back upon. But, even allowing for its current uniqueness in the 2 Series family, a 320d M Sport saloon is £36,635 and therefore a mere £2780 price walk from the 220d Gran Coupé.

That the Three is nothing like as ugly and is rear-wheel drive to boot only makes this decision a complete no-brainer, in our eyes. Of course, there’s no direct 3 Series equivalent for the M235i, as the M Performance Three has a 340hp six-cylinder and is therefore in another league for price by a margin of more than £11,000. Yet it’s the 2 Series’ challenging aesthetic that hampers its potential appeal most of all. Therefore, if you can live with the outlandish looks, there’s a fi ne car to discover underneath this somewhat lumpy skin.

Cabin and practicality distracts from the exterior styling…