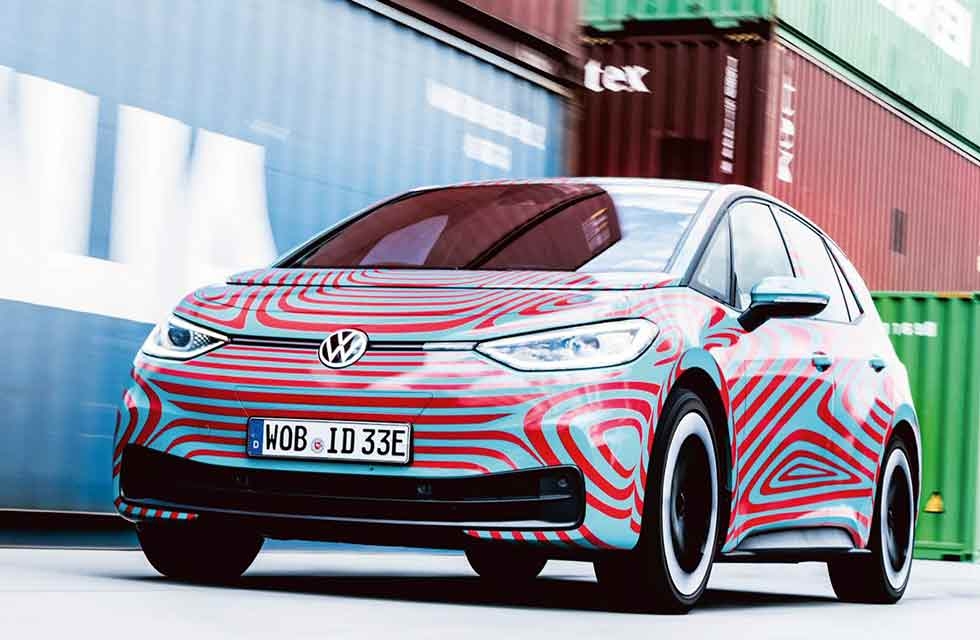 Id day. The car to bury Dieselgate and propel VW into its electric future.

The future is now. The 2020 Volkswagen ID3, VW’s Golf-size battery-electric hatch, goes on sale this time next year as an affordable mainstream car designed to be more desirable, more functional and more normal than the Leaf, Zoe and i3. Expected to cost from just over £30,000, it’s a five-door five-seater with up to 201bhp and a potential range of almost 350 miles. And we’re driving it right now, in unfinished pre-production form, one of the first ID3s to roll off the Dresden assembly line.

Hit the starter button, then use the gear selector mounted on the steering column. It twists in two directions: forward for drive and the re-gen modes; back for neutral and reverse. It’s unfamiliar if you’ve only ever driven petrol or diesel, but it’s simple and logical enough to get used to very quickly. And the reward comes immediately, in the form of silent, instant torque. Put your foot down and you’ll be impressed by the take-off momentum 229lb ft of torque can generate. True, the forward thrust does not compare to the spine-snapping Ludicrous mode of Tesla’s top-of-the-line Model S. But since the ID3 weighs a relatively light (for an EV) 1670kg, acceleration is linear and insistent. The ID3 is closer in size, price and performance to the Model 3 than the Model S, while avoiding the making-a-statement tendencies of all Teslas.

It’s a crowd magnet in this swirly finish. But special livery aside, the design is conspicuously inconspicuous

Stab the VW’s throttle at 30 or 40mph and let this zero-emissions sled waft you to 60 or 70mph in a sublimely energetic fashion. This is the drivetrain’s sweet spot, where the propulsive forces eclipse rolling resistance and drag. Above 80mph, every additional degree of throttle travel is instantly penalised by the distance-to-empty and state-of-charge read-outs. So forget about aggressive overtaking manoeuvres and late-braking corner- to-corner stints: the ID3 has been optimised for smooth driving.

Beyond the compulsory pedestrian warning buzzer, which switches off above 12mph, the electric VW has its own characteristic tone of voice, which varies from a wheezy whisper to a happy hum. Wind noise is an issue, and so was tyre rumble on our test car, although it was not wearing the low-rolling-resistance tyres that will come as standard.

The spring and damper tuning did not feel worthy of a finished car, either. Low-speed ride was wooden, and poor road surfaces could be jarring. But the handling is as neutral and secure as a Swiss bank, thanks to the balanced weight distribution in this rear-motored, rear-drive car.

With no heavy engine between the front wheels, the ID3 benefits from a low centre of gravity, faultless traction and quick steering action. It remains to be seen whether the optional adjustable dampers can cushion the barren ride, whether the transition from passive electric to heavy hydraulic braking will be polished prior to the arrival of the ID3 in VW showrooms, and whether the directional stability is susceptible to crosswinds on more exposed roads than we experienced on our test drive.

In the conventional drive mode, response from both pedals is brisk but not rushed. If you engage the high-re-gen setting, lifting off the throttle gives prompt deceleration with no need to touch the brake pedal except in extreme circumstances. Low-regeneration mode makes it easier to drive smoothly, while offering some lift-off braking.

And before you know it, you feel like you’ve been driving the ID3 forever. It’s easy to drive – and to like. All those development millions, all that brainpower, and they’ve created a car that very quickly feels pretty familiar and normal. This is a huge success, given products on Volkswagen’s MEB architecture are not aimed at Tesla-style early adopters, but at the soccer-mom mainstream. For all the conventionality of the way it drives, what’s under the skin is entirely new – not one bit of Golf, Polo, Passat or anything else makes it into the MEB.

The skateboard-style arrangement that puts the battery modules in a water-cooled cradle in the belly of the car gives a slightly higher seating position, a better view and a few extra cubic inches of cabin space – think Golf SV, and you’re almost there. Freed from traditional packaging constraints, the engineers moved the front chassis rails closer together, giving the front wheels more room to move. The most striking benefit is a much tighter turning circle; it’s now almost as manoeuvrable and easy to park as a Smart, and it U-turns with the nimbleness of a London taxi. The steering itself, however, still needs some fine-tuning in the shape of stronger self-centering, better defined straight-line performance and more feedback when winding on lock. The ID3 is 4261mm long, 1809mm wide and 1552mm high. These figures are close to the current Golf Mk7. But it sits on a 2765mm wheelbase, which is 128mm longer than the Golf’s, and runs on 19- or 20-inch tyres.

There will at first be three choices of drivetrain, with battery packs of 48, 55 and 62kWh, enabling WLTP-certified ranges of 205, 261 and 342 miles respectively. The batteries, which account for about 50 per cent of the total production costs, are warranted to have a least 70 per cent of their usable capacity after eight years or 100,000 miles. There are two motors to choose from, rated at 148bhp and 201bhp, both of which propel the rear wheels through a single-speed transmission. All-wheel drive and more power, from an additional electric motor on the front axle, will be available later.

A few months after the ID3 goes on sale across Europe, the ID4 Cross SUV is expected to arrive at dealers. Next in line are 2021’s long-wheelbase ID Buzz (2021) and ID Aero saloon, then in 2022 the seven-seater ID Lounge. The second wave of ID products will put an emphasis on more emotional concepts such as a multi- talented coupe, an RUV (rough utility vehicle) and a pair of lightweight special-purpose commercial vehicles, sources tell us. Meanwhile, the MEB architecture will spread throughout the Seat, Audi and Skoda line-ups in various forms. And Ford will use MEB to create at least one pure-electric vehicle, due in Europe in 2023, as part of a deal that will enable Ford to play catch-up and VW to recoup some of its costs.

The version of the ID3 we drove was the flagship 62kWh, 201bhp model, which can accelerate from zero to 62mph in 7.5 seconds, with its top speed limited to 100mph. Find a 100kW charger and you’ll need just 30 minutes to take on board enough energy for the next 160 miles; it can accommodate a charging capacity of up to 125kW. If you choose to use the biggest battery for range rather than speed, your ID3 might be good for 430 pussy-footed miles. Bespoke wallboxes will be available from VW, and it’s been working with Tesco in the UK to accelerate the roll-out of public charging points.

More details will be available after the finished production car has been unveiled at September’s Frankfurt show, but expect three equipment levels, plus a bells-and-whistles first edition with head-up display and panoramic sunroof. A version of the red and green swirly finish of our test car might be offered as an early limited-edition finish. Looking like this, there’s no wonder it turns out to be a crowd magnet. But special livery aside, the design is conspicuously inconspicuous. Pity about the highly questionable full-width black panel that plugs the gap between bonnet and windscreen like a bulging afterthought.

Inside, the packaging is claimed to match the Passat, but I’m dubious. Legroom in row two feels insufficiently generous, and visibility to the rear is compromised by the wide C-posts and intruding roof spoiler. Although the ID3 is taller than a Golf, it doesn’t have a useful gain in headroom; blame the underfloor batteries. The boot is a decent size, though.

The entire instrument panel is lifted from the Seat el-Born show car we admired at Geneva. Essential data such as speed, state of charge and range are relayed by a small monitor in front of the driver. Infotainment can be accessed via the multi-functional steering wheel and the 10-inch touchscreen above the centre air outlets. The optional head-up display is useful, projecting its augmented-reality message to the driver’s primary field of vision in the middle of the car’s flight path. With the exception of the awkward sliders controlling volume and temperature, the in-dash layout is largely self-explanatory and easy to use.

Assuming the below-par ride quality is sorted out before launch, the ID3 feels reassuringly normal. It presents few challenges for even the most reluctant EV driver, and many pleasures.

But however accomplished the ID3 is, it can’t be viewed in isolation. Some bits of the future have not yet arrived. The charging infrastructure, mostly. Although the ID3 can travel far enough to reduce range anxiety to manageable levels, there’s still its next-door neighbour to deal with: charge anxiety. That’s the fear that you’ll turn up at a charging point and find it’s not working, or there’s a queue; or you’ll plug your car in to your wallbox at night, only to get a phone call telling you that you’re required 300 miles away, and you’ve only got 80 miles in the battery. That will be enough to make plenty of people decide that the time is not right for them to go electric, not yet, not quite.

Is charging a hassle?

THE CHARGE NETWORK IS GROWING FAST

Ownership and operation of the UK’s network is divided between multiple companies. It’s worth registering with more than one provider for flexibility. The UK’s largest public chargepoint network Polar (operated by BP) offers both pay-as-you-go and subscription options. Ecotricity has something of a monopoly on the motorway network, with 300+ sites at service stations. More competitors will follow, as private investment in the sector ramps up. Tesla owners can enjoy the company’s proprietary Supercharger network, with 290 locations and counting.

An RFID charge card is the easiest and most convenient way to access most public chargers, but you don’t have to use one. A bank card or appequipped smartphone can now get you anywhere. If you don’t have the latter, government policy is to make access to rapid chargers in particular possible with contactless payment. Before too long authentication data will be stored in cars, with payment made automatically.

HOW LONG WILL I HAVE TO WAIT?

Slow chargers (3kW) are an overnight eight-hour job to fill an empty battery. Equivalent time for fast chargers (around the 7-22kW mark) is three to four hours, and rapid chargers (43kW+) around 35 minutes. Not all cars are capable of using the most rapid of chargers; some offer higher-grade capability as an option.