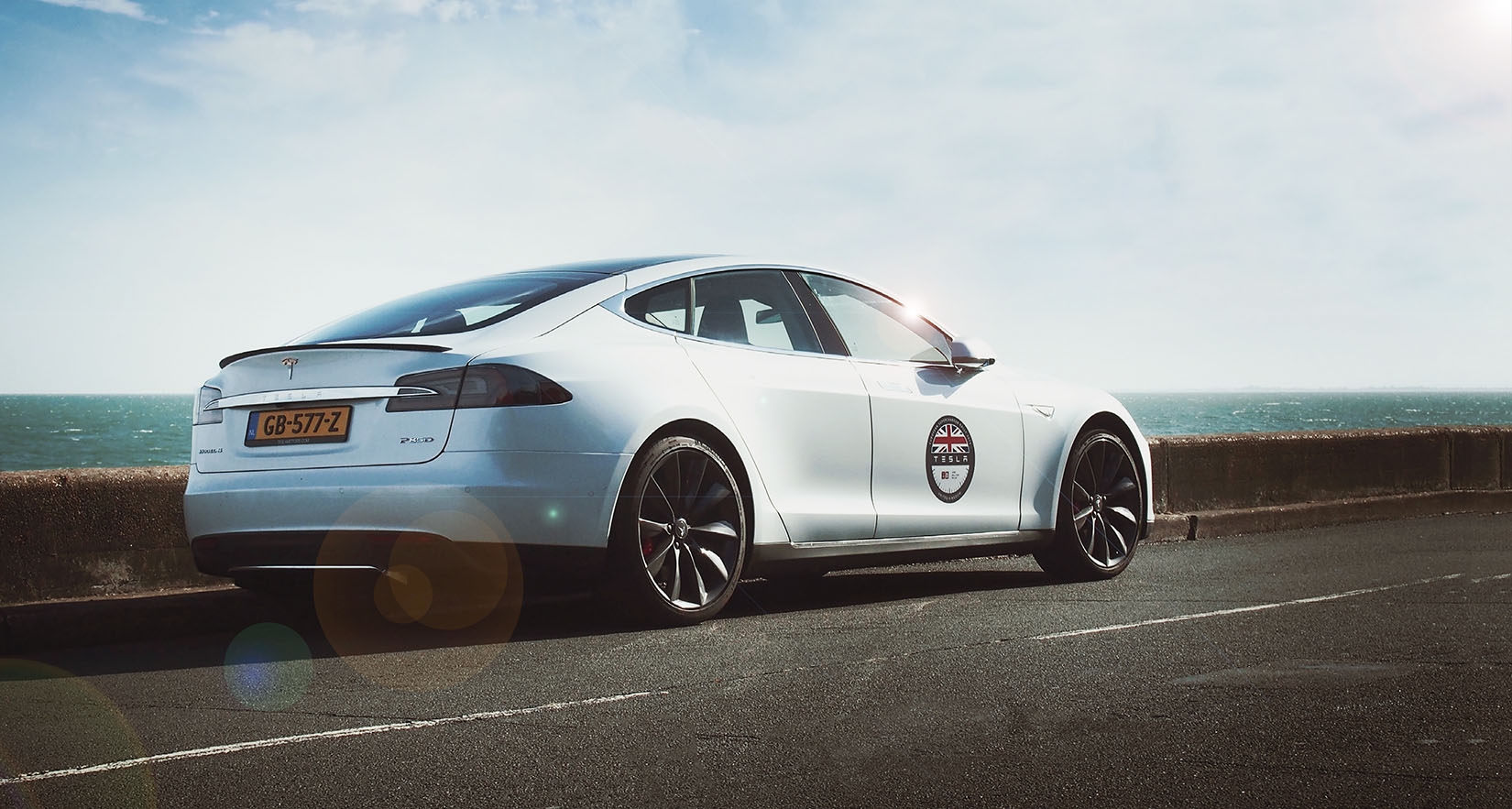 First Drive: Tesla Model S P85D. Yes, more Tesla! AutoVolt gets a first drive in Tesla’s supercar beating P85D. It’s shockingly (or should that be insanely) quick! Having been given a Tesla Model S P85D for the return leg of our Tesla Supercharger trip, we took it across a variety of roads through the Netherlands, Belgium, France and the UK. WORDS: Jonathan Musk. PHOTOS: Lucy Hargrave.

BESIDE THE SEASIDE A wolf in sheep’s clothing, the P85D gives nothing away to hint at its ‘Insane’ performance potential. 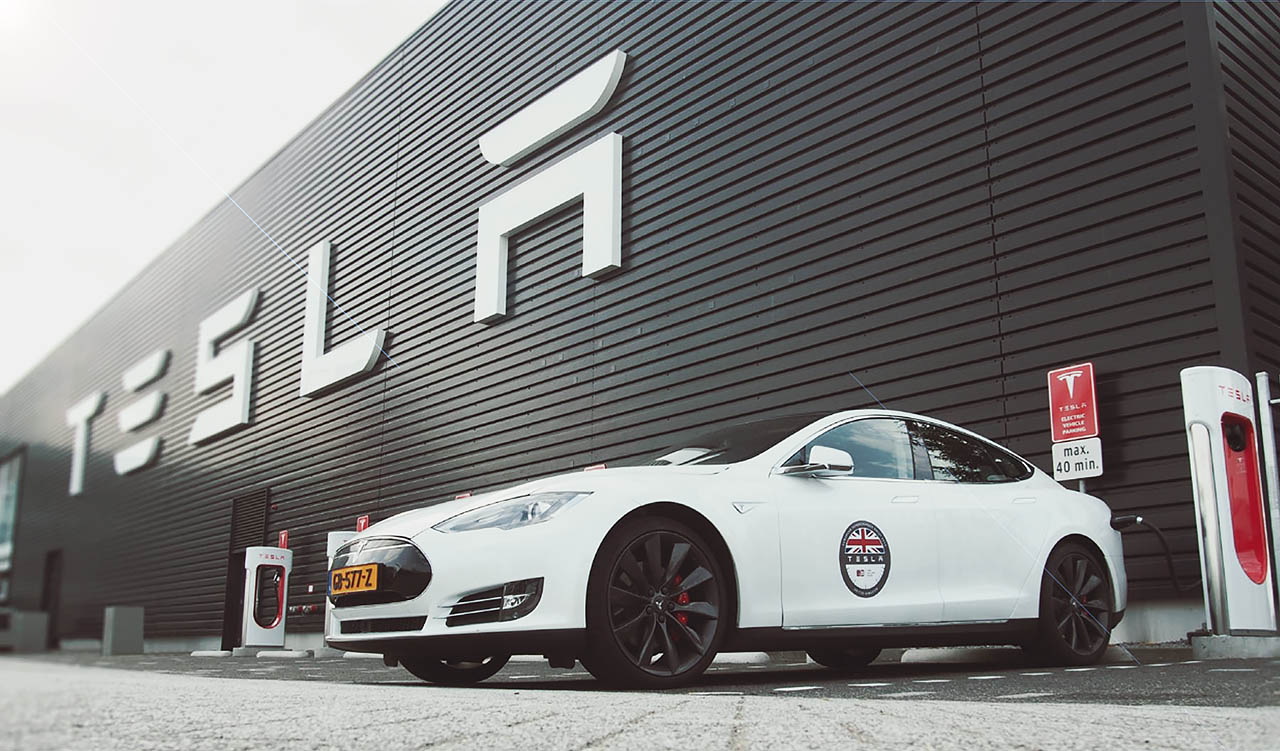 Take a look on YouTube and you’ll notice that ranking above the plethora of funniest cat videos there is greater interest given to watching the Tesla Model S P85D embarrass the most nostalgic motoring names. Drag racing a P85D it seems has become a past time for both those who film it and those who watch it – online only. Is this a sign that it is a car for the youngster, not bound by the same constraints that you and I have regarding the respect for the established car world? No. Not at all. Instead, it is a sign that the uninfluenced generation have made their own mind up that electric cars are cool and especially cool if they can trounce a Ferrari or Lamborghini from 0-62 mph and onwards to complete a quarter mile sprint.

The P85D then, has already gained an almost legendary status. It is without doubt the darling of the electric car world and fast becoming the bane of most automotive firms older than 2010 – which is all of them. Perhaps that’s because nobody has dared before show up the competition like Tesla has or that nobody else has dared swing away from our fixation that sport cars should be loud sleek gas guzzlers only capable of carrying two + two amputees? Whatever the reasoning, Tesla has remained remarkably quiet while news of their machine goes viral.

So, what is it actually like to drive? It all depends upon your starting point. If coming from the land of gas and oil, then it is remarkably different to anything else you will have ever experienced before. For starters, there is no start button. No key slot and no way to turn the thing off once you’re done trying to figure out how to turn it on either. Instead, simply walk up to the car – it will have sensed you’re standing beside it – and open the door using the gloriously eccentric door handle that has presented itself in front of you having protruded from the door like something out of a science fiction movie. Jump in, buckle up, foot on brake and select drive from the steering column mounted lever. Simple as that and you’re off. Stamp on the go pedal and in 3.1 seconds you’ll be travelling at 62 mph. If you really master the speed at which you can open the door and buckle up, you should be able to get your out-of-car- to-62 mph time to less than it takes most cars to accelerate to the same speed, with the driver already in position. It is astonishingly quick. 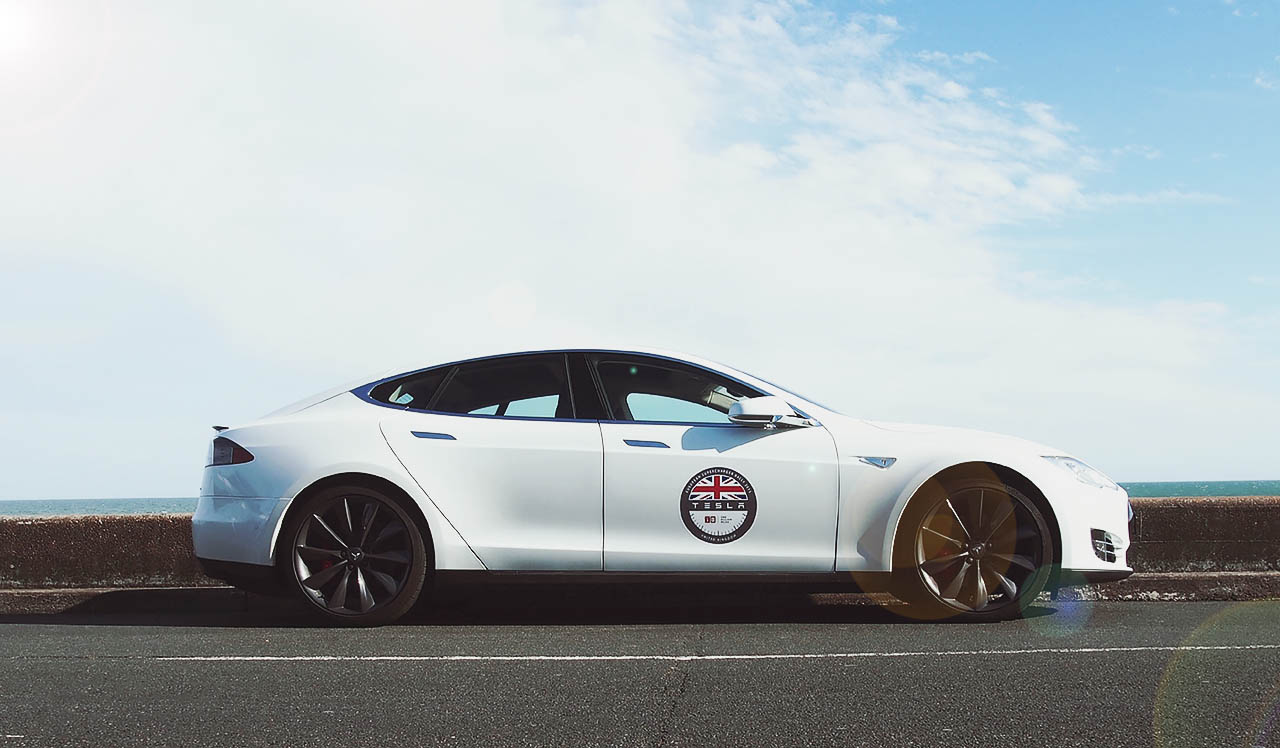 Speed is one thing, but can it handle too? Yes it can. The key to cornering ability is a low centre of gravity, which is generally a bit of a problem for most cars since their engines have to be mounted relatively high as the crankshaft needs to be at the base of the pistons, meaning a great bulk of engine must be higher than that point, no matter how low that point can be. Tesla doesn’t have that problem as the electric motors themselves each weigh less than 50 kilos and in this car there are two of them, one for the front wheels and the other for the rear. It’s the reason why Tesla has named it ‘Dual Motor’ and the ‘D’ appears at the end of the P85D name. Aside from the lightweight motors, which by the way are mounted low down in the car, between the wheels, the car’s battery is the greatest item of weight. Tesla has sensibly placed it right at the bottom of the car between the four wheels, making the overall centre of gravity incredibly low. Remember this is a five

or seven seat hatchback with acres of boot space when you’re informed that the centre of gravity is the same as a Ferrari 458. That’s pretty remarkable for something that can carry that many people and their luggage too. The P85D therefore can handle like the best of them and perhaps a better comparison would be BMW’s excellent M5, that is too a car with supercar performance but is capable of accommodating five people with luggage. However, while the BMW would be sensationally fast, the Tesla is able to leave it standing and travel in silence as well as be fuelled for free and offer one of the safest driving experiences too according to Euro NCAP and the American NHTSA equivalent.

Too good to be true? It seems not. The only stopping point is the asking price, but considering its performance, that too is remarkably cheap. At £79,900 including the current government Plug-In Car Grant (PICG), the level of luxury, space performance and dare it be written; prestige incredible value for money.

However, it is all well and good being able to perform madcap pursuits against rival fast cars. What is it like when driven at normal, regular road speeds, which is after all where it will spend most of its time? Thankfully, the answer is not the sort of negative counter remark you might expect in a bid to balance an article. Instead, the P85D exhibits the very same road manners as its less powerful siblings. The four wheel drive element is merely a detail when driven in traffic and when not besting lap times at your closest track day club. Refinement is excellent, even in spite of the large tyres needed to keep the car on the road when moments of madness occur. Essentially, the remarkable thing about it is that it is unremarkable. Travelling along motorways is a pleasure and because the Tesla is relatively modest, it doesn’t attract too many undesirables egging you on either.

There is little reason to believe that there is anything else quite like it available today. While there are some (but not too many) cars faster than it, they don’ offer the same level of interior accommodation or everyday practicality. There are other cars that offer similar load lugging ability but that don’t come close in performance. They also usually look like a modified van, which is probably because that’s what they will likely be.

The typical Tesla 17” touch screen sits pride of place in the centre console and is identical to use as it is in any other Model S. However, one small button has been included that commences ‘Insane’ mode and allows the hedonistic performance usually associated with hyper cars. In honesty, this is more of a gimmick than anything else as when driving the car gently, the car is never aggressively trying to make you drive faster. The beauty of electric power is that it will only consume what it needs and so the P85D can be as efficient as a Nissan LEAF. In fact, refer to the aforementioned YouTube and look up, ‘Tesla world record on one charge’. You’ll see a P85D being driven exceptionally carefully and slowly, yet travel a distance of 452 miles to one charge. Typical range is more usually about 250 miles and the official figure is 305.

For our cross country road trip, the P85D performed flawlessly. As with the 85 we drove the day before, it never once gave a sense of any range anxiety despite the 225 mile trip from Amsterdam to Calais. Stopping only for a bite to eat and a couple of diversions, one purposely and the other incidentally, the P85D was the perfect car for the entire length of journey. Whether it was cruising around the busy streets of Amsterdam, or blasting along the motorway through Belgium and then attempting a country lane diversion in Northern France, the car was masterful in all situations.

Essentially, this is the best trick of the Model S. Tesla set out not to make the best electric car, but rather the best car. They ended up making it electric because they felt it was a better solution to using a petrol or diesel unit that took up precious cabin space as well as added inherent complication. The Model S isn’t without its faults and the hugely spacious interior could be improved as mentioned in our 85 article, but overall this can be forgiven when performance as exceptional as the P85D can offer is attainable for such a relatively low price.

Shortly after our European road trip, Tesla announced the introduction of a further couple of upgrades to their model line-up. The first is a new ‘fuse’ that Tesla can install on the P85D enabling it to accelerate from 0-62 mph in just 2.8 seconds, with the new ‘Ludicrous’ mode enabled. That makes this family saloon car as fast as +£700,000 hyper cars as featured in this magazine. Furthermore, upgrades to the battery can now be had too, allowing a 90 kWh battery to be installed that provides additional range. While this is only 5 kWh more than the 85 kWh Model S, which is 25% of the full capacity of a Nissan LEAF’S battery and so is not insignificant. Tesla state range should increase by 6% and this addition was not made by squeezing more cells into the pack. Instead, a new anode material has been used that makes the battery more efficient. 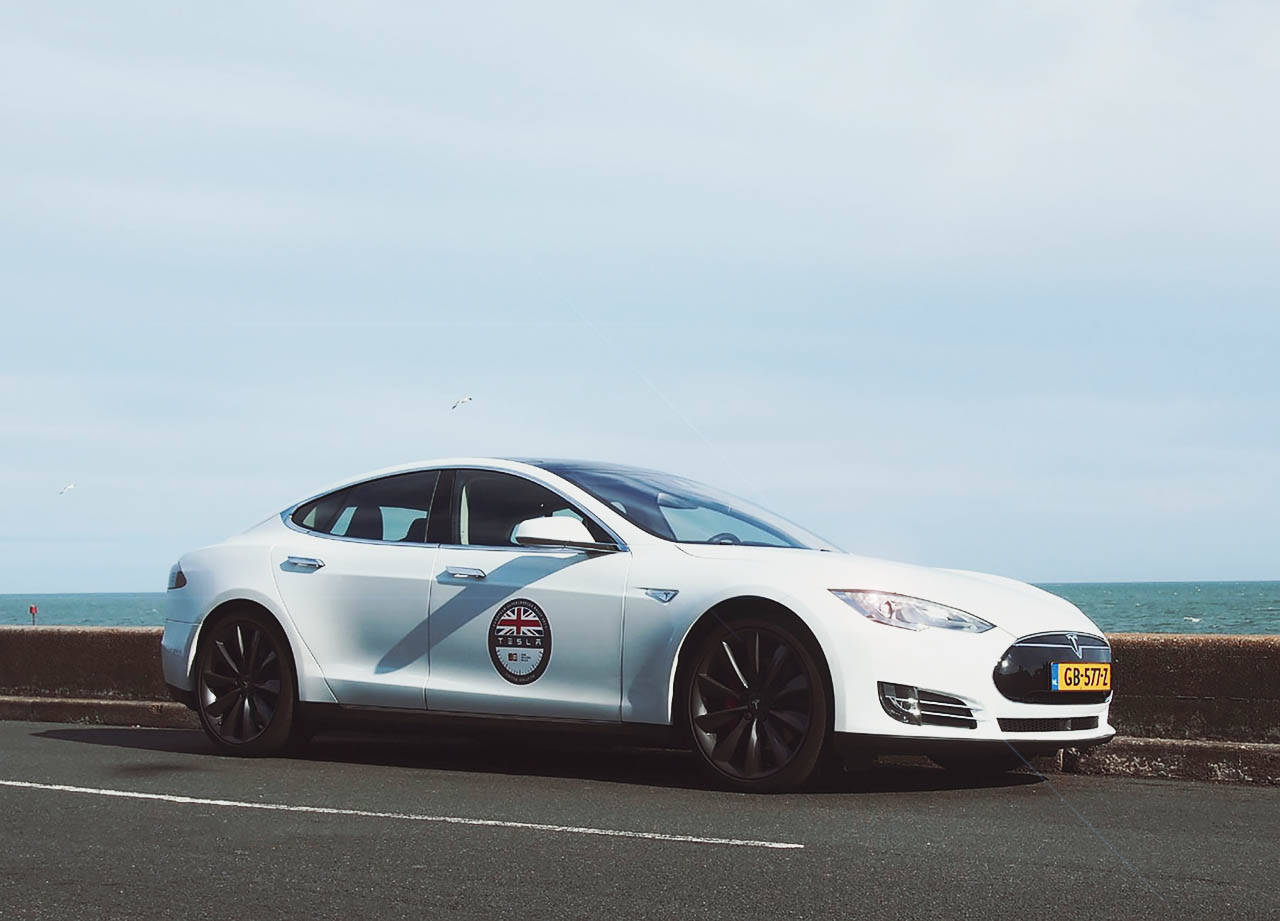 The second motor making this car, ‘dual motor’ is located in the front storage compartment, or ‘frunk’. It takes up some of the space, but leaves plenty for shopping or even a small suitcase. The graphic shows the location of the motors (in red) and battery. Being so low equals fantastic cornering ability.

A handsome four door hatchback in the shape of a saloon means there is plenty of occupant space. Supercharging at Tesla’s Amsterdam European HQ. The ‘Insane’ option on the touch screen display, allows a driver to make the most of the blisteringly fast performance. ‘Sport’ mode is still shockingly quick for a car of this size. Digital display reminds you this is the P85D.