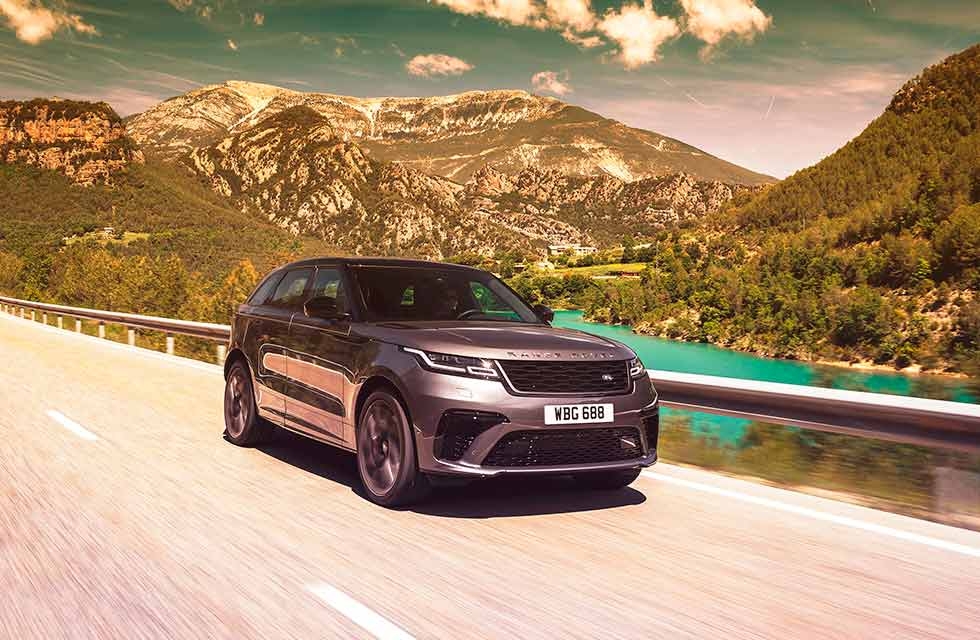 This is a car that almost didn’t exist. When Jaguar Land Rover’s finances started to look shaky, its Special Vehicle Operations arm had to take some tough decisions, striking the super-luxo three-door Range Rover and off-road-biased Discovery SVX from the product plan, then hovering the crossing-out pen over the Jaguar F-Pace SVR. The Jag won a reprieve, which was good news for this, the sportiest Velar, with which it shares its engine and platform. Given the faff of redesigning the bulkhead to squeeze JLR’s supercharged V8 into the engine bay, one couldn’t exist without the other to give economies of scale, though the Velar will be made for just one year, unlike the soon-to-be-facelifted Jaguar.

To reduce the overlap between these two brisk SUVs from the same maker, the Jag is tuned to be snorty and aggressive and gets the SVR badge. This Velar, meanwhile, is made in the image of the treatment applied to the full-size Range Rover, which attempts to marry easy performance with high luxury under the unwieldy banner of SV Autobiography Dynamic.

The lux bit is covered by a thorough interior retrim with acres of soft quilted leather, real aluminium shift paddles and sundry metal trim pieces that have been fed through a knurling machine. The overall effect is smart and tasteful, even with the optional carbonfibre trim that features interwoven metal threads for added sparkle. The exterior revisions, which extend to new bumpers, side panels and wheels, are equally well-judged, giving the Velar a beefier stance without spoiling its sheer-sided good looks. The changes are practical as well as cosmetic and hint at the engineering upgrades beneath. The new front bumper, for example, gains bigger intakes to feed the V8 behind, while the rear one accommodates four substantial, and real, exhaust tips that are the visible part of a new system that saves 7.1kg. Likewise, the new forged alloys, in 21- or optional 22-inch diameters, save up to 2.5kg per wheel over the cast equivalents on other models.

The SVA gains these weight-saving measures not to offset the mass of its own badges, but to prove that it’s about more than looks and extra leather. It’s also got the upsized brakes (395mm front, 396 rear), fatter anti-roll bars and active rear diff from the more overtly sporting F-Pace SVR. However, there are differences. The Range Rover is 90kg heavier at 2085kg, for one thing, and wears the same-width 265/40 tyres all round, where the Jag has 25mm fatter rears. Most significantly, while the F-Pace rides on coils, the Range Rover uses air springs, albeit with smaller chambers than other Velars to increase the effective spring rate.

‘You can fling the Velar down a winding road at a giddy lick, harnessing that lovely V8 shove’

The use of air suspension helps in the compromise between cornering vim and ride quality, while giving the car the ability to get onto its tiptoes for off-road work. Land Rover considers this important enough to have debated at length the height of the front bumper lip in a battle between on-road aero effectiveness and off-road approach angle. The aero faction got their way on the undersides, where a new transmission tunnel undertray smooths the airflow at the risk of getting scuffed on the rocks you will never crawl over.

Such changes suggest a thoroughness to the SVA D conversion beyond simply installing a big engine and some extra cow skin, and this is immediately apparent on the road where, even at low speeds, the car feels tighter and more tied down than a normal Velar without seeming busy or aggressive. Switch to Dynamic mode and click the eight-speed auto ’box into Sport and there’s a subtle shift in tone as everything becomes a little faster, weightier and more urgent, allowing you to fling the Velar down a winding road at a giddy lick, harnessing that lovely, instant V8 shove. All 542bhp and 501lb ft of it.

Where a normal Velar has a bit of slack in its steering away from the straight ahead, this one is accurate without being twitchy so that it goes where you ask. Likewise, the roll and slop in the suspension of lesser models is vastly reduced, so you can confidently blast through bends without fear of scraping the paint off the door mirrors. It can’t quite hit the mad, high-riding hot hatch feel of a Porsche Macan Turbo, but it’s still an easy car to trot at pace across the landscape (0-62mph is over in 4.5sec and top speed reached at 170mph) and it’s a delight to find the better handling hasn’t been achieved at the expense of the ride, which is firm but well damped, and notably better than the bobbly sensation of slower Velars on big wheels.

Of course, the ride is at its nicest in Comfort rather than Dynamic mode, and actually that goes for the whole car, right down to the switchable exhaust, which gets a bit harsh at higher revs in its noisier setting but is muted and fruity if you back it off. The SVA is perfectly capable of hustling along on the ragged edge with all the systems set to their fightiest, but it’s when you stop trying to push it so hard and knock everything into the softer settings that it feels at its best.

Given Land Rover’s ambitions to make this a high-riding, long-striding GT, that’s not necessarily a problem as long as you remember that for not much more than the £86,685 the SVA will cost you could have a full-size Range Rover SDV8, which brings an even more soothing sense of occasion, if not such controlled handling. Alternatively, if you really want the supercharged V8 and a side order of cornering ability, you could have the F-Pace SVR and save yourself over ten grand in the process.

As such, the Velar SV Autobiography Dynamic finds itself in a strange position. It’s a perfectly nice car, but the same company makes other things that better cover the extremes of its personality. But if you want a Velar, this is the nicest they make.

Above: Velar SVA utilises air suspension to help combine cornering ability with ride quality, whilst aiding its off-road capability too, although how many will venture away from tarmac is another matter. Left: forged alloy wheels come in 21- and 22-inch options and save up to 2.5kg per corner over the cast items found on regular Velars; uprated 395mm front and 396mm rear brakes are borrowed from the Jaguar F-Pace SVR. Above: new exhaust system helps shed 7.1kg; those tips are real, too.

+   Quick, luxurious, the pick of the Velar bunch