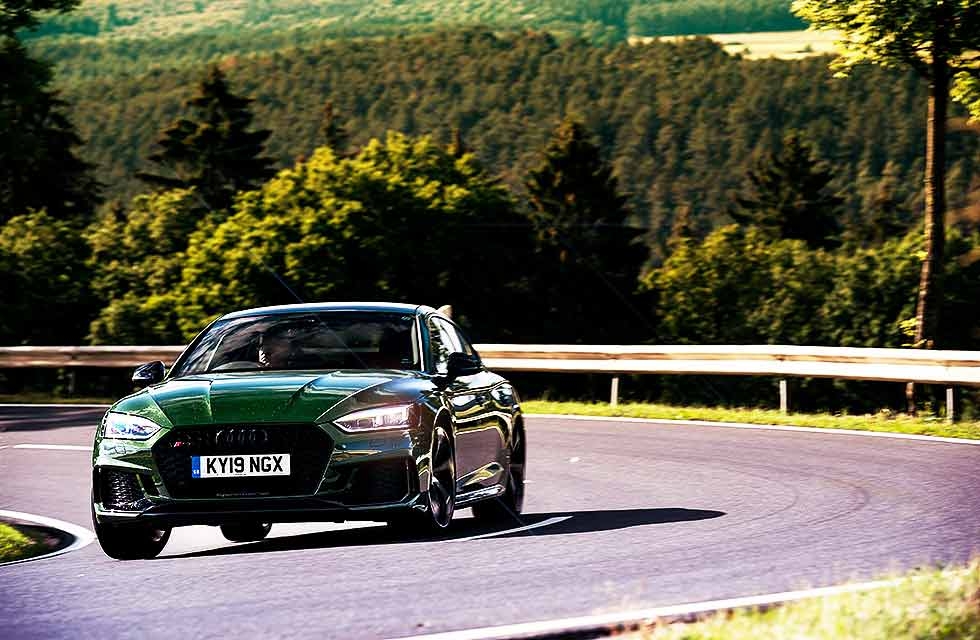 The only fast Audis to consider are those that wear an Avant body; it’s written in the rules somewhere, on the internet most likely. Generations of RS4s and RS6s have built on the legacy laid out by the original RS2 and are firm favourites of those who enjoy a performance output that’s directly proportional to the load space available.

However, remove the load space and, R8 aside, Audi Sport’s model line has often fallen short of expectations. RS3s are a bit of a blunt instrument, likewise the TT RS, which mistakes rapid progress for driving thrills. And the RS5 coupe? As a GT car it could pass for a junior Bentley, but as a sports coupe it comes up short when asked to go splitter to splitter with a C63 C205 or M4 F82. Quick, but not engaging; plenty of grip, but little in the way of entertainment. It’s a fine place to spend a lot of miles, though, offering a bit of fizz should the road become interesting.

None of which leaves much hope for the new RS5 Sportback 8W6. It’s the first time Audi Sport has been charged with applying its RS recipe to the Sportback shape (it will be doing the same for the A7 later this year), and for all intents and purposes the result is an RS5 coupe with two rear doors and an opening hatchback. And yet it feels a sweeter drive.

After taking a WLTP hit and being sent back to the dyno room to pass the latest emissions regulations, the 2.9-litre twin-turbo V6, codeveloped with Porsche, returns with unchanged figures of 444bhp and 442lb ft of torque, numbers that put it at the back of the class when facing AMG, Alfa Romeo and BMW. And as we discovered with our long-term RS4, while the V6 is a willing performer, it’s not what you would call a charismatic one.

In the RS5 Sportback it’s a similar tale. There’s a near-instant response to throttle inputs, followed by a rapid-fire sequence of upshifts from the ZF eight-speed auto ’box as it races for the most emissions-friendly gear as quickly as possible. It’s a performance-dulling process. So you scroll through the Drive Select system and find Dynamic mode, shift the lever to manual and do it all yourself. A sharper throttle follows, and by changing gear manually you feel more connected to the action, a larger cog in the performance mechanism, if you will. Run the turbocharged six to its peak and the speed piles on at a rate you expect of a car carrying an RS badge (0 to 62mph is done in 3.9sec). But it’s still not whip-crack quick or pin-you-back-in-your- seat thrilling. Much of this is down to the mute vocals that accompany the process, the remainder the switch-like gearchanges that feel more PlayStation than 13-time Le Mans winner.

Forget about the engine being an emotional pull and turn to the dynamics and the RS5 Sportback has a surprise or two. It’s no M3 Comp Pack F80 when you start to push and go looking for feel and feedback. Neither is it a C63 C205 when all you want are thrills and tyre bills. However, what it is a faithful device that can cover ground, no matter how challenging, with such resolute surefootedness that the RS5 Sportback’s reason for being suddenly becomes clearer.

It’s blisteringly quick across A-roads, blending tenacious grip from its quattro four-wheel drive with a sense of connection and feel unfound in the RS5 coupe and RS4. It settles into a corner with a reassurance and a level of feedback that’s unexpected, but oh so welcome. The steering weights up with a precise motion, allowing you to lean on the tyres’ grip rather than guess where it is, and the car controls its mass with a fluidity that allows you to work with it rather than against it, which means quicker corners are less of a leap of faith and more of a linear, controlled process. However, it’s when you arrive at a slower, tighter deviation in the road that the RS5 Sportback B9 feels out of its depth. It’s here that the steering lacks low-speed precision, culminating in a less-than-fluid turn-in as you take a number of bites to latch on to the apex. And then the mass needs controlling, because if you’re too fast and have committed too early the body pitches with a lurch and there’s little you can do until it settles down. It’s frustrating that a car that has such good high-speed composure falls over in the slower stuff.

A bit of a damp squib then, the RS5 Sportback? Not quite. We know it doesn’t have the sophistication in its chassis of a Giulia Quadrifoglio, M3 F80 or C63 C205. Neither does it have the single-minded focus on pure performance of the aforementioned. But it does have huge appeal for those who want something that’s special, is a step up from the model beneath it in the range and offers an alternative look from the norm. It’s the Audi RS from today’s crop that I’d consider above all the rest.