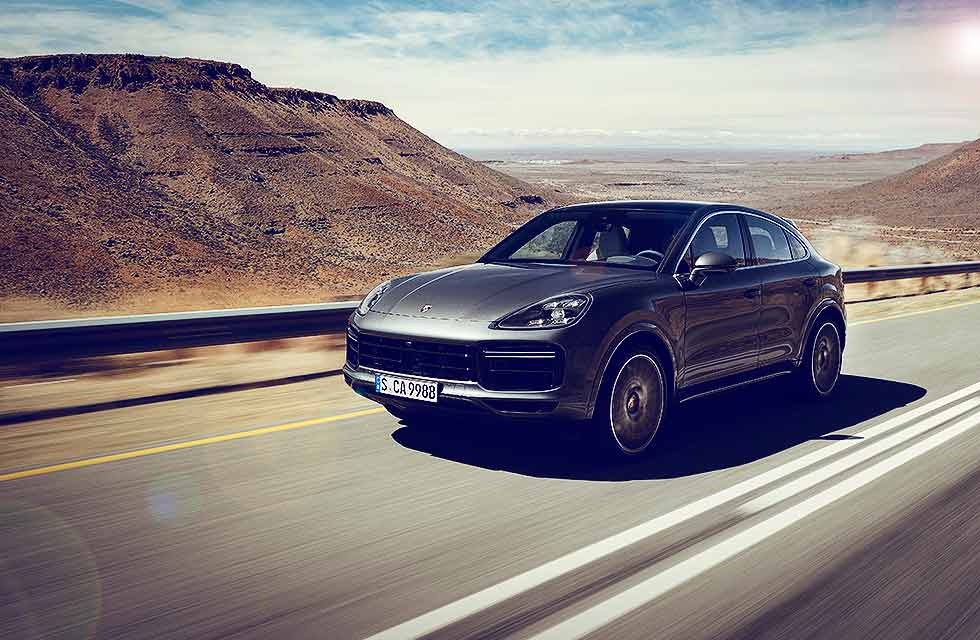 you fancy me Go on, admit it A fast, fun and family-practical Porsche, the Cayenne Coupe is the 911 blueprint gone crossover Words Georg Kacher.

A lot of style, a lot of substance. But is this any more than a cash generator? A spirited blast across Germany should help us find out

Porsche, which isn’t bad at spotting niches these days, is convinced there’s a market for a Cayenne with a dose of the Macan’s sporting flair. ‘I joined in 2004, when the first Cayenne was launched – I couldn’t imagine a Cayenne Coupe back then,’ design chief Michael Mauer tells CAR. ‘But as the generations passed it became obvious that we could do one. We don’t use clinics; we just want to design cool cars.’ The Cayenne Coupe is simply a more rakish body over Cayenne fundamentals, and Porsche has form here: it’s already massaged the Panamera range with the LWB executive edition and the Sport Turismo shooting brake.

Think Audi Q8, BMW X6, Mercedes-Benz GLE Coupe. Then think Porsche Cayenne, until now more Stuttgart’s answer to the Q7, X5 and GLE than a genuinely sporty SUV with a capital S. It took Weissach R&D one full Cayenne life-cycle to conclude that Porsche also had to create the kind of machine that’s proved such a licence to print money elsewhere. When Matthias Müller was still in charge, two SUV coupes were in the making: a smaller one based on the facelifted Macan and a bigger, Cayenne-based creation. The Macan-based remix may yet resurface in 2024, as a version of the upcoming Audi Q6 e-Tron built on the electric PPE architecture. But you can order your Cayenne Coupe now.

In the metal the low-roof Cayenne is in-your-face: wider, ground-hugging, arguably prettier and quite different, especially in the rear where flared arches, a carbon diffuser, an extended fixed roof spoiler and a motorised second air deflector make up the improved Porsche active aero suite known as PAA.

While the faster A-pillars and more steeply raked windscreen lower the car’s summit by a token 20mm, the roofline drops significantly faster from the B- to the C-pillars. The reduced height affects the ease of entry and exit to and from the second row, as well as rear headroom – though you do sit 30mm lower than a standard Cayenne to compensate. It’s also darker and more claustrophobic in the back, like the Lamborghini Urus.

The Cayenne Coupe goes on sale with a choice of three engines: either the 335bhp entry-level or 434bhp S model (both V6 turbos), or the Turbo tested here, a bi-turbo V8 good for 542bhp. All can be optioned with the Lightweight Sports Package, which saves up to 22kg, but adds a heavyweight £7482 to our Turbo, and an even chunkier £9342 to the lesser models. Go for it and the roof and cabin trim turn carbon, the standard 20-inch wheels (0r 21s for the Turbo) give way to matt 22-inchers, the black-and-white plaid upholstery adds a touch of classic 911, leather and alcantara abound, and the rowdy sports exhaust exits via four fat tailpipes capable of turning the deaf into folks with perfect hearing, and vice versa. While nav is standard, Porsche still charges extra for keyless go, and every single assistance system bar the legally mandated ABS and ESP systems.

At 2200kg, the Turbo coupe is about 700kg heavier than the new 911, and yet very nearly as quick. The dragster-like acceleration from zero to 62mph takes a time-warp 3.9sec, sprinting to 125mph is an equally stunning 14.6sec flurry, and the 177mph top speed can only be described as remarkable in view of the vehicle’s terraced-house frontal area.

In Sport Plus, with the exhaust set on max volume, tip-in makes the Cayenne roar like a Stuka rolling into a dive. Further enhanced by its fearless orange livery, our test car earns widespread respect, but probably doesn’t make any friends. You see, even in Porsche’s homeland, social acceptance is a fast-growing issue that confirms that the zero-emission Taycan cannot arrive a day too soon. After all, the onboard display of the V8 headturner simply refuses to move to the eco-friendly side of 15mpg. It could, in theory at least, but it doesn’t, and for only one reason: the temptation to set spurs to this trucklet with the heart of a sports car is simply irresistible.

On the autobahn, even fast-lane regulars have long stopped underestimating the overtaking power of high-performance SUVs. Despite its substantial bulk and mass, the Cayenne Turbo coupe rules the 85 to 125mph straightline domain like no other. With 568lb ft on standby from 2000rpm to 4500rpm and a fast-acting eight-speed transmission to match, on-demand full-forward thrust is a way of life. At the end of any long straight, it’s above all the considerable drag that sees the Coupe eventually drop behind a flat-out 911. Having said that, Porsche’s engineers have, to an extent, turned this disadvantage into an asset by creating enough downforce to create the world’s first ground-effect SUV. On the A7 north of Stuttgart, there are a couple of 150mph bends that are flat in a GT3 and flat again in the Cayenne Coupe. There is no wobble, no shoulder shrugging, no undue tramlining. Like the Urus, the Porsche stays put, cool and relaxed, and hugely confidence-inspiring. Given the height of its centre of gravity, it’s deeply impressive.

The loaded test car boasts carbon-ceramic brakes (grabby and noisy), matrix headlamps (a must-have), rear-wheel steering (so much more important than the even more expensive 48-volt anti-roll bars), torque vectoring (delete) and Innodrive, which includes active cruise control. Nice to have but not essential are the crowded head-up display, ventilated massage seats and the Burmester stereo.

What’s missing from the option list is any form of electrification, at least until the 680bhp V8 hybrid arrives in the course of model year 2020. The Coupe not only adopts the busy MMI system from its stablemate, it also shows the same detail flaws such as push buttons that can get stuck when pushed, poorly fitted glossy in-dash panels, irritating ergonomics (work out those stalks in a flash, if you can), a disappointingly harsh low-speed ride and the brusque low-gear throttle response, even in Normal mode.

In terms of handling, roadholding, performance and brakes, the Cayenne has most rivals firmly under control. On a rainy day, you want the dampers in Normal, the drivetrain and steering in Sport, and ESP off because the intermediate handling mode spoils the fun before it begins.

Unfortunately, you don’t have the option of locking the drivetrain in rear-wheel drive, deactivating the differential or playing with the torque split. Hard cornering typically starts with a nudge of understeer followed by a long neutral phase which either turns into a brief all-wheel slide or lays down as much power oversteer as the strip of tarmac that is still left can take. Since the twist action is available in full force from 2000rpm, third-gear drifts are definitely also an option.

In the dry, the P Zero tyres and the trick suspension produce an unreal amount of grip and traction, with the rubber yowling for mercy and the inner rear wheel collecting enough loose chippings to keep you warm over a long, cold winter.

Sport Plus adds a shot of syrup to the steering rack, sees the suspension flex its muscles and releases a couple of angry hornets inside the transmission housing every time the driver hammers the throttle. Although you’re much better off in Sport, coasting is still only possible in Normal. Since even the most powerful Cayenne is unlikely to ever show its true colours on a racetrack, the 10-piston fixed-caliper steel brakes are just fine for hard everyday use.

What Porsche does so much better than just about everyone else is to calibrate the weight of the controls in sync with the selected drive mode. Steering, brakes and acceleration are playing into each other’s hands and feet with impressive subtlety. Rather than locking the transmission in Sport, where it likes to show off by disturbing the flow, it’s best to use the shift paddles and time the changes yourself. And what is there not to like about the surprisingly compact 4.0-litre V8?

Well, on the one hand there is still room for a 600bhp Turbo S, and on the other an efficiency improvement wouldn’t go amiss – sounds like a challenge, but a worthwhile one. In the meantime the Cayenne Coupe makes a lot of sense for a car built on an inherent contradiction.

Happier than he thought he’d be. Sports exhaust’s racket alone is enough to kick the rear axle sideways.

Wet roads? Pah. The days of having to treat those with respect are long gone Like a Cayenne but cosier (or an XXL 911)