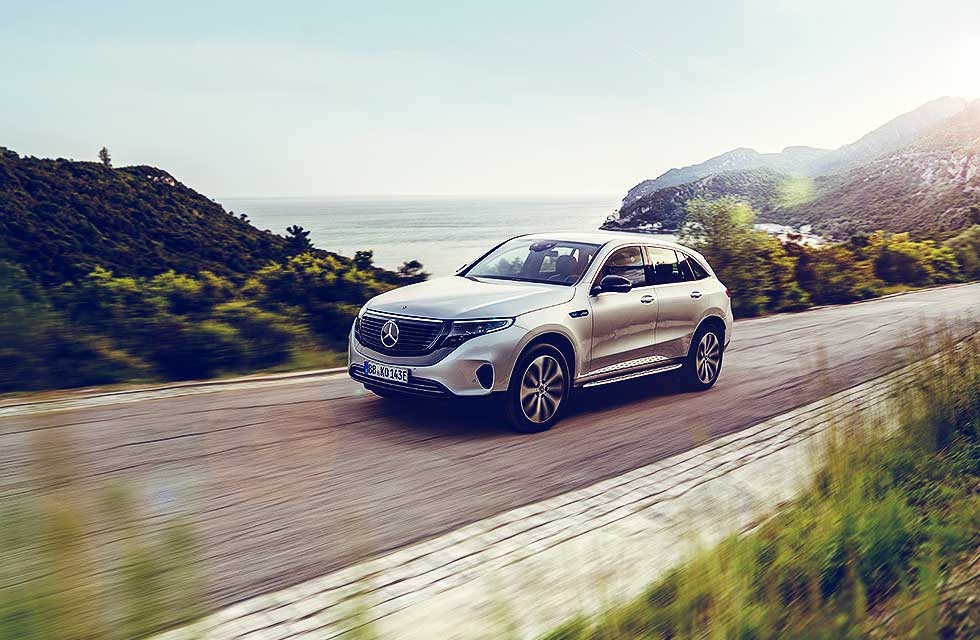 2020 Mercedes-Benz EQC Nothing to see here. The first electric car from the car maker that invented the car is a big deal, surely? Nah. Mercedes’ new EQC might be electric but above all it’s a Mercedes.

Ruthlessly sensible in every way, from its compromised but production-efficient platform engineering to its comprehensive aftersales care, Mercedes’ landmark battery-electric EQC isn’t without a sense of fun. While it’ll happily coach you in the oddly satisfying art of EV hyper-miling, in 400 guise (less powerful versions, still with all-wheel drive, will follow next year) the EQC is well able to thump you in the back and prompt the juvenile joy that comes with piling on speed without any apparent effort.

Ahead, perfectly-surfaced Norwegian A-road glides left and right between great walls of pine, each curve cambered just so. Lovely. Only there’s a logging truck and three cars in the way. Heavy though the EQC undeniably is (2495kg), 396bhp and the instant, 564lb ft twist of the two motors don’t seem overly troubled. From a dawdle the faintly awkward-looking Mercedes soars up to speed in an instant; perfect traction, no delay, barely any audible effort.

Now free to cruise as you see fit, without traffic, there’s time to take in the car. The EQC is electrification by stealth, the contemporary electric car not as a bold, brave harbinger of change but as a Trojan horse, ushering in the zero-emission future so quietly you’d be forgiven for failing to notice. The package isn’t clever or particularly spacious and there’s no front boot, no giant infotainment iPad, no cameras for mirrors and no geeky Easter eggs hidden deep in the infotainment. From the glossy screens of MBUX to the elegant, almost baroque interior of the higher trims levels – finely fluted detailing, brassy vents, beautiful fit and finish – Mercedes’ new electric car is far more a Mercedes than it is a new electric car.

Refined? Of course. In Germany the EQC is built on the same production line as combustion- engined Mercs, a move that, while imposing limitations, makes for an enviable degree of production flexibility. The front motor unit, twice rubber-mounted to smother its work, even lives in a tubular steel cage whose shape mirrors an engine and gearbox, easing assembly (while adding weight – EQ chief engineer Michael Kelz admits such compromises add at least 150kg). The rear motor unit is equally swaddled in rubber insulation, helping create a cabin and driving experience so whisper-quiet and calming that the world beyond seems catastrophically loud when you park up and climb out. There’s some audible work from the power electronics if you’re sitting in the back, and the murmur of tyre roar and mirror turbulence haven’t gone away, but the EQC’s ability to remove all that might be considered tiring from long-distance travel is impressive.

Flowing with the road over wooded, hilly rural Norway, the driving experience is at once composed and unexciting. There’s grip, power and a degree of poise, despite the weight and the lack of any clever electronic roll control (the front end’s steel-sprung, the rear on passive air springs). But while the cosseting ride, on 20-inch wheels (preferably the ace multi-spokes) stops short of wallowing, nothing about the numb steering or the pervasive sense of weighty loftiness ever makes you feel like trying harder, braking later or carrying more speed in the way that, for example, the Model 3 Tesla or Jaguar i-Pace undoubtedly do.

Making for Oslo, the chic wooden holiday homes and dazzling, crystal-clear lakes give way to urban sprawl. Gliding around the ring road, alternately diving into dim tunnels and climbing, blinking, into the fiercely bright afternoon sun, the EQC goes on quietly impressing. When red lights go green the Mercedes always wins, launching clear of everything you just queued with in moments. Its two motors aren’t identical, with the front wound for peak efficiency under low load and the rear for power. As such the EQC is front-wheel drive much of the time but feels rear-driven, since under duress it’s the rear axle that delivers the lion’s share of the forward thrust. At the same time MBUX impresses with its augmented-reality nav display, the map making way for a camera view of imminent junctions with helpful arrows and road names to assist you on your way.

It’s typical of the EQC’s approach that there’s no hefty off-throttle deceleration to get used to. Five levels of regen are available, selected via the shift paddles behind the wheel. And because you instinctively click the left paddle to increase engine braking, flitting between the different levels on the fly, as the road dictates, soon feels entirely intuitive.

Select the Max Range mode, hold the right paddle for D auto and now the EQC dedicates itself to eking every mile from the battery, urging you to back off when, via nav data and traffic sign recognition, it calculates that any more throttle will simply go to waste. Within certain limits it also tweaks the level of regen, working to charge where it can but freewheeling if it’s more efficient to simply carry the speed.

Range, then: 259 miles (WLTP) compares with 292 miles for the Jaguar i-Pace and 259 miles for the Audi e-Tron. Stealthy charging by Mercedes technicians whenever we stopped means the wait for a real-world figure goes on but the car generally rated its energy consumption in the low 30s (kWh/100km) rather than the claimed 22, suggesting normal driving would lop a third off that range figure. While it’s stopped short of its own Supercharger-style network, Mercedes has at least worked to make charging as easy as possible, linking 80 per cent of public charge providers to both its navigation system and owners’ accounts (pay via a card or the downloadable app), easing payment, and offering a discounted (£275) fast-charging Chargemaster wallbox. And these are but two aspects of an aftersales package which, while not hugely innovative, does feel engineered from scratch to systematically allay every EV fear you might have, from battery life (an eight-year, 100,000- mile warranty) to grinding to a halt (recovery to the nearest charger).

If you’re starting to think a lighter, simpler and cheaper EV might be more you, a glance at the EQC’s pricing won’t do much to change your mind; £65,640 for the Sport, rising to £74,530 for AMG Line Premium Plus, and nearly £80k for the loaded 1886 edition. And while Sport cars come with blindspot assist and parking assist, you’ll need the £1695 Driving Assistance bundle for tech like active cruise, active steering assist, active braking assist and evasive steering assist. The EQC won’t win any awards for originality. It looks like any other Mercedes SUV, it designs nav routes around strategic charger usage like a Tesla and its package is entirely conventional. The next generation of Mercedes electric car will use a dedicated platform, and perhaps then we’ll see the innovation so conspicuously absent here. Until then the EQC is here to ease the transition, its most significant achievement the fact that it’s an electric car that feels like any contemporary big Mercedes you may have been fortunate enough to drive; refined, thoroughly engineered, reassuringly expensive. The more things change, the more they stay the same.

A slickly executed, fast and hugely refined EV. Not cheap nor particularly fun but easy to use, easy to own and reassuringly Mercedes

Front-wheel drive much of the time, the EQC feels rear-driven since under duress it’s the rear axle delivering much of the thrust

Slick infotainment does the lot, from charging strategy to pretty diagrams of energy flow. Acceleration is so instant and effortless it feels quicker than 5.1sec 0-62mph. You don’t need time to adjust to how it looks – or how it drives. Wraparound dash and cosy cockpit are in stark contrast to Tesla’s roomy minimalism

MBUX is pretty and rich in functionality. But like any touch-based system it takes time to master

42 minutes Max Range with Eco Assist works beautifully, making for ultra-efficient progress. But life’s too short, so you stick it back in Sport

PLUS + Performance, interior, ease of use, entirely unchallenging