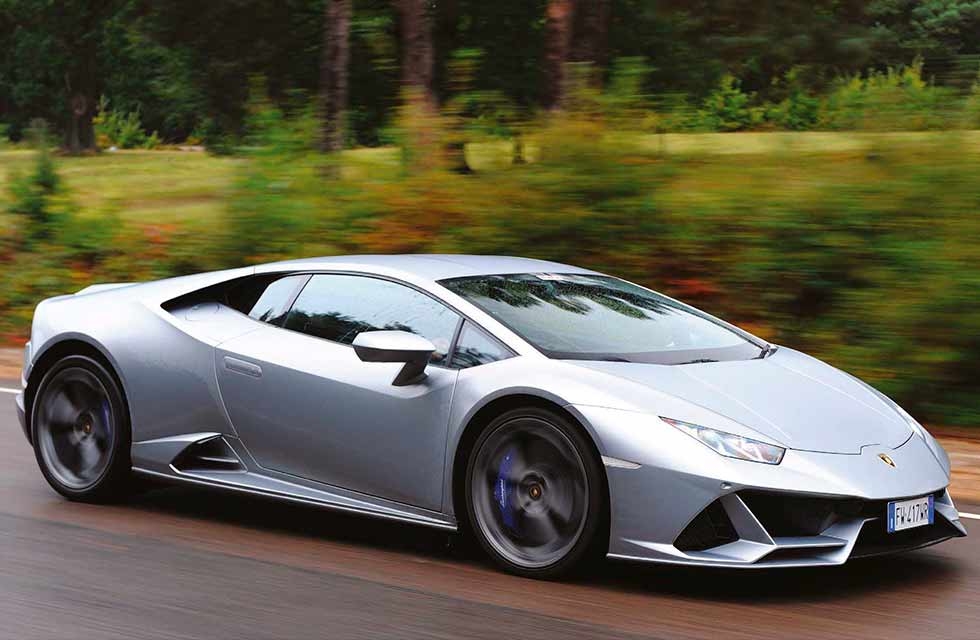 Coupe and Spyder models on test

There was a period between the Miura and the Gallardo when Lamborghinis were, shall we say, inconsistent in various respects. Ferrari ruled the roost. Today, under Audi’s ownership, Lamborghini has evolved, in particular the V10-engined cars. The Huracán has been a game changer and just gets better and better. The Italian supercar gap is narrower – for the time being at least.

Part of the Huracán’s success is its naturally aspirated power unit, developed from the Gallardo’s. In its original 2014 Huracán guise (the four-wheel drive LP610-4), the V10 had 610hp. In 2016 came the two-wheel drive LP580-2 with power reduced to 580hp, while the LP640-4 Performante of 2017 boosted power to 640bhp. Now we have the new 2020 Huracán Evo, which borrows the Performante’s power unit and tweaks it to include titanium intake valves and a new lightweight exhaust system.

“Like the Ferrari 458 Speciale, the Huracán Evo could soon be the end of an era”

While Ferrari is fully committed to turbocharging its V8s, Lamborghini has avoided going down this route with its V10, but for how much longer? It doesn’t matter what the engineers do to concoct a decent sound from a turbocharged engine, the naturally aspirated engine still has the aural edge.

Visually the Evo differs from its siblings by having a reprofiled front bumper to improve aerodynamics and cooling. At the rear, the spoiler is now slotted to benefit hot air extraction from the engine compartment and the flow of exhaust gases from new, higher-mounted pipes. A new diffuser design increases downforce, while out of sight underneath the car are new deflectors that also increase downforce. Lamborghini claims that downforce has been improved sevenfold compared with the original Huracán.

The major qualifying aspect of the ‘ 2019 Evo’ title is the four-wheel steering and torque vectoring, and the all-new Lamborghini Dynamic Vehicle Integration (LDVI) system. The driver is oblivious to the LDVI, which operates in the background and constantly adjusts the car’s chassis settings. Lamborghini even claims that LDVI can set the car up to anticipate the driver’s next move.

Accurate real-time updates of the car’s behaviour are constantly fed back, with dynamics managed by magnetorheological suspension, a steering system that engages all four wheels via all-wheel steering, traction control, torque vectoring and constant distribution of the torque between the two axles (this is a four-wheel drive machine, with a 30/70 front/rear bias).

The drama begins with the initial start-up when the engine explodes into life but quickly settles down as it comes up to temperature. On the road, the Huracán’s V10 is just superb and in Sport and Corsa mode it sounds just glorious. The crackle between the explosive gear changes adds to the excitement and is super-grinworthy all the way up to the 8000rpm red line.

There are three driving modes – Strada, Sport and Corsa – which are selected via a conveniently located illuminated switch at the base of the steering wheel. Strada mode is best for real world driving and has the most comfortable suspension setting for relaxed motoring. The smooth-changing seven-speed dual-clutch transmission will trickle along in top gear at just 40mph.

However, don’t expect fireworks to happen if you give the accelerator a quick squirt at low speed. Best to click the down paddle for the desired response.

Sport is the option to select if you like some oversteer. While previous Huracáns had a tendency to understeer (difficult to engineer out of all-wheel drive cars), the Evo is much sharper on turn-in. That’s a result of a combination of increased downforce at the front, new-generation Pirelli P Zero tyres and the torque vectoring system. There is a very fast off-camber sweeper on our test track, and if you lift off mid-corner in a lesser car, you can easily provoke lift-off oversteer; however, the Huracán detects the issue and remains planted and safely on course.

Corsa mode is essentially for track day fast laps, offering maximum traction and accuracy. The grip is simply phenomenal and the corresponding g-forces really require full seat harnesses to keep the driver pinned down. Whatever mode you choose, the car sounds great, looks fabulous, and is very easy to drive quickly and hugely entertaining. It instils confidence and flatters the driver.

The Huracán scores big points with me in its cabin layout. All the ancillary switches are lined up in easy reach and well labelled. The stop/start system is very easy to override and there is a very useful front ride height switch to avoid grounding. Daylight running lights come on as soon as the engine starts, however its worth a mention that, in common with many other cars, only the front lights illuminate and not the rears, which are essential in poor weather/low light conditions. Illuminated switches in the footwell open the front boot and engine compartment, but for some reason you can’t open the engine cover unless the engine is running. The Strada/Sport/Corsa selector is also conveniently placed at the bottom of the wheel. The instrument cluster carries everything important you need to know in the same eye-line and in one display.

The Evo has a new 8.4-inch portrait infotainment system in the centre console, with Apple CarPlay as standard. I found some basic functions difficult to find instantly, diverting my attention from the road, in particular the heating and radio volume controls. The audio system is superfluous beyond town driving speeds, since the exhaust note and tyre noise soon take over, but then it’s a very nice soundtrack to listen to.

The seats are superbly adjustable and quite comfortable. On our test car they were trimmed in blue to match the vibrant brake callipers. The choice of matt grey body colour was a talking point but it does give the Huracán a sinister stealth fighter appearance – at least you would never need to polish it. Rear vision is an issue, especially in rain as the see-through engine cover does not clear very well.

If you’re in the market for a car in this class and prefer a pure aural experience, then the Huracán Evo is an excellent choice. Buy one while stocks last, as like the Ferrari 458 Speciale, the Huracán could soon be the end of an era.