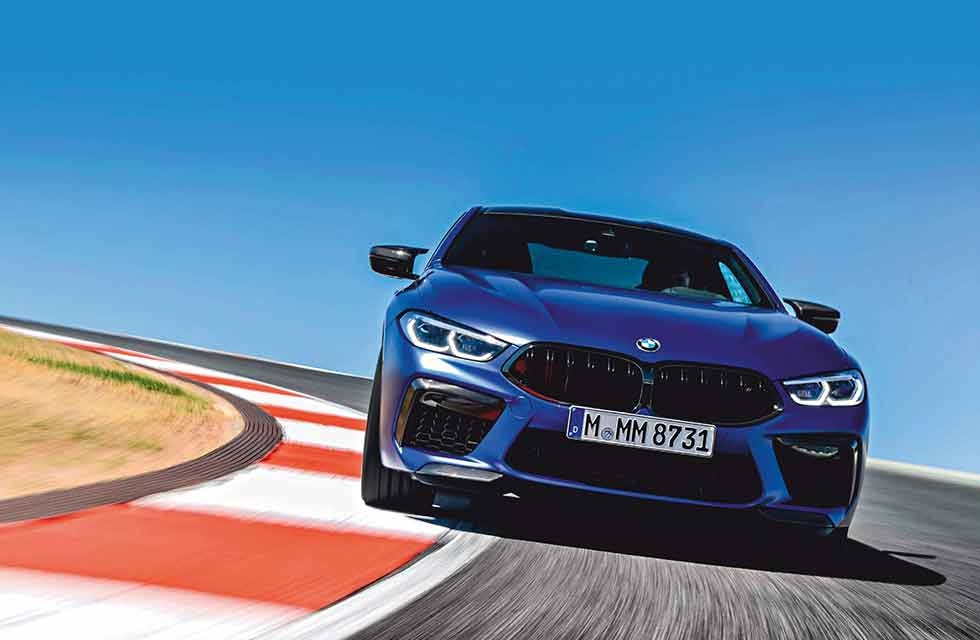 Unlikely competition BMW’S new M8 is a fine fast luxury cruiser, but it’s no Porsche 911 Turbo 992 crusher, despite what the Bavarian brand might say.

BMW would like to think the M6 came close to challenging the Porsche 911. It didn’t. And R&D chief Klaus Frohlich says the new M8 Competition F92 “has what it takes to secure the sports car crown in the 600bhp segment”. It doesn’t. In fact, the M6 F13 replacement is not a full-fledged sports car at all, rather a more desirable GT that weighs 285kg more than a 911 Turbo S 991.2. The 8 Series is in essence, again, a rebodied 5 Series, kicked upmarket to a new price point that comfortably eclipses its predecessor, the commercially inconspicuous 6 Series.

AGAINST THE STOPWATCH THE M8 FEARS NONE, BUT IT’S AN ODD MACHINE THAT FALLS BETWEEN MANY STOOLS

When they defined their new flagship, the engineers could have gone down electric avenue, taken a bunch of weight out or even put the engine in a different position, but instead settled for a pragmatic evolution of the status quo. Which raises the question whether the latest arrow in M Division’s quiver is sharp enough to really hurt the competition. Unlike its ancient ancestor, the legendary reduced-to-the max 3.2-litre CSL ‘Batmobile’ E9 of the ’70s, the new M8 is kind of a no-holds-barred overkill proposition, aimed to be rigorously sporty yet overtly luxurious. To accomplish this problematic mission, its creators pulled out all the stops, just as they had done with the sixth-generation M5. But while it was easy to pardon the four-door saloon for taking on weighty go-faster bits and ritzy upmarket mod-cons, the M8 perhaps should have been more of a purist’s car.

ON THE TRACK AND THROUGH THE TWISTIES, PUSHING THE M8 TO THE LIMIT IS HARD YET EXHILARATING WORK

In the end it turned out to be more of the same, the strategists avoiding the risk of sharpening the brand’s flagship coupe when the Cabriolet and the Gran Coupe variants are destined to follow the same conservative concept that seemingly clicks with a loyal but ageing clientele. Although the 8 Series is on a standard seven-year lifecycle, electrification of any kind is conspicuous by its absence.

The 617bhp M8 Competition was launched on the Portimao circuit in Portugal and nearby country roads. On the track, we had to follow a pace car, were cautioned not to touch the ESP button or activate 2WD, and since sideways cornering was strictly off limits no such pictures were to be taken at any time. This car was to be presented as a precision tool, not an enabler of hooliganism. Which was a shame because the irresistible 750Nm torque summit from 1800-5600rpm is perfectly capable of initiating controlled drifts in 4WD Sport and sending up enough smoke to darken the blue sky in 2WD. True, the awesome longitudinal acceleration rarely ceases to amaze. Whizzing up to 0-62MPH (100km/h) in 3.2sec and on to 200 in 10.6sec feels (and is) jolly quick. The same goes for the top speed, which increases from 250 to 305km/h in cars fitted with the optional M Driver’s Pack.

With these numbers, one expects great things from the cream-of-the-crop BMW. And the M8 delivers, for instance by masterminding the front-to-rear and side-to-side torque split like a pro, then conquering a banked second-gear corner with swift single-mindedness thanks to determined turn-in and a self-correcting balance supported by fast-acting dampers and standard rear-wheel steering. Although it can play all the tricks and then some, the on-track performance of the ultimate Bavarian muscle car makes you frown with surprise and criticism more frequently than expected.

What keeps putting a spoke in the wheel is above all the weight; at 1885kg, the M8 Competition coupe simply has too much fat over its frame. On road, the 4.4-litre V8 produces easily enough grunt to overcome this physical handicap, but at Portimao the 250 excess kilos are clearly felt. Predictably, the first victims are the tyres. On fresh rubber, the handling is not too nose-heavy and understeer has yet to rear its ugly head, but tyre pressures soon soar and the car squiggles and fishtails, fighting a losing battle against abrasive Portuguese tarmac.

The M boys could have cobbled together a decontented rear-drive M8 CSL with only two seats and without AWD, but we’re told the market for such a car is too small to justify the investment. Instead, they opted for an all-in high-tech model featuring M-specific upgrades for aerodynamics, suspension, steering, brakes and drivetrain. In addition, the carbon-core 2+2 coupe body received numerous reinforcements to beef up torsional stiffness, the ride height was lowered 10mm compared to the M5, the centre of gravity dropped 24mm, and the 19-inch wheels were replaced by 20s with Cup tyres.

Unfortunately, none of the tech goodies are weight-neutral, and most boast numerous alternative calibrations that make things complicated. In fact, for the first time ever, BMW even offers two different brake settings, but it’s hard to see the point of providing different feedbacks to what is essentially the same intent and input. In case you’re wondering, the stopping distances are allegedly identical.

IS THE LATEST ARROW IN M DIVISION’S QUIVER SHARP ENOUGH TO REALLY HURT THE COMPETITION?

So the hurdle on the way to your preferred dynamic set-up is how to best judge, access and bundle the myriad of options. Engine and transmission operate in Efficient, Sport or Sport Plus. The three tuning stages of the dampers are Comfort, Sport and Sport Plus. Brakes and steering each offer a choice of Comfort or Sport. The xDrive system can be set in 4WD, 4WD Sport or 2WD. The standard M Sport exhaust is even more brutal in Sport Plus mode.

If that sounds complicated it’s because it is, at least until you discover the new ‘Setup’ button in the centre console. Push it to select, store, review and modify your favourite DNA. Red toggles on the steering wheel labelled M1 and M2 summon your two favourite dynamic medleys, be it for laidback cruising with all electronic watchdogs on duty, or for plenty of risk and even more fun without electronic safety nets.

Another fresh addition to the crowded cockpit is an M Mode button, which invites you to tweak the assistance systems and digital displays to your liking. In Sport, the main readout – focusing on revs, upshift warning lights, road speed and gear position – is flanked by g-force meter, tyre pressure monitor and boost indicator. Track mode idles all helpers, switches off the sound system and blocks incoming calls.

BMW expects the M8 Gran Coupe later this year to become the best-selling body style, accounting for every second order. The other 50 per cent will likely be split between the coupe and cabriolet, which tips the scales at an even more critical 2010kg, its rear passenger compartment is yet more cramped, the cargo bay less cavernous, and the three-quarter visibility is a guessing game. Despite these reservations, the folding top does suit the M8’s grand cruiser character, and confirms the effectiveness of the numerous body-strengthening measures.

Bleached by scorching sun, dusted with fine sand and deteriorated over time, the B-roads between Faro and Lisbon are a dangerous terrain for low-flying sports cars. A properly set-up GT like the M8, however, will master even the worst sections without bottoming out, hitting the bump stops or grazing its prominent chin spoiler. Lack of low-gear grip is more of an issue in this habitat, as is the occasionally agitated on-off roadholding though quick pock-marked corners, dropping a way dips and alternating camber changes. But even on these tricky roads, it’s best to leave the driveline in Sport Plus, which keeps the transmission on its toes by striking a nice balance between relatively late upshifts and neatly timed downshifts.

On the other hand, the variable-rate, variable-effort steering feels more at ease in Comfort. Sport quickens the response when you need to wind on even more lock or stage a low-speed mid-corner correction manoeuvre, but the price for that extra dose of agility is more effort and a dash of artificial stiffness, which fakes a straight-line stability that eventually falls apart on sub-standard blacktop. It’s a different story altogether on smooth pavement and on the motorway, where steering weight and response, precision and poise don’t deviate greatly.

On the track and through the twisties, pushing the M8 F92 to the limit is hard yet exhilarating work. In either environment it’s at the height of its game in MDM (M Dynamic Mode), which reels in stability control while sharpening the car’s key responses to driver inputs. With 7200rpm to play with and oodles of torque available at almost any speed in almost any gear, you can either rev the hell out of this engine or zoom in on the sweet spot around 2000rpm, where maximum grunt consumes minimum energy.

The 8 Series is an odd machine that falls between many stools. It costs $30,000 (AU$50,000) more than the discontinued 441kW M6 in Europe but is a less compelling drive than the current M5 Competition that sells for much less. While it is notably quicker than, say, the Aston Martin DB11 V8, it lacks that special sense of occasion. Similar money buys a Mercedes AMG GT R, which is a superior track weapon and much more of a proper sports car. In the final analysis, the closest rival is perhaps the new Bentley Continental or, if money is not the decider, the Ferrari GTC4 Lusso V8.

Against the stopwatch, the M8 must fear none of these challengers. But when it comes to style and craftsmanship, flair and exclusivity, presence and space utilisation, the attempted synthesis of hardcore dynamics and augmented luxury produces a slanted picture. Perhaps a clear either/or concept would have yielded a more convincing result than attempting to conceive a best-in-class jack of all trades.

MAIN BMW might have targeted German rival Porsche’s enduring classic, but the M8 Competition weighs in some 280kg more than a 911 Turbo S 991.2.

LEFT Equal portions of luxury and performance? It’s surely a contradiction of terms. Who needs a Swiss army knife on wheels?