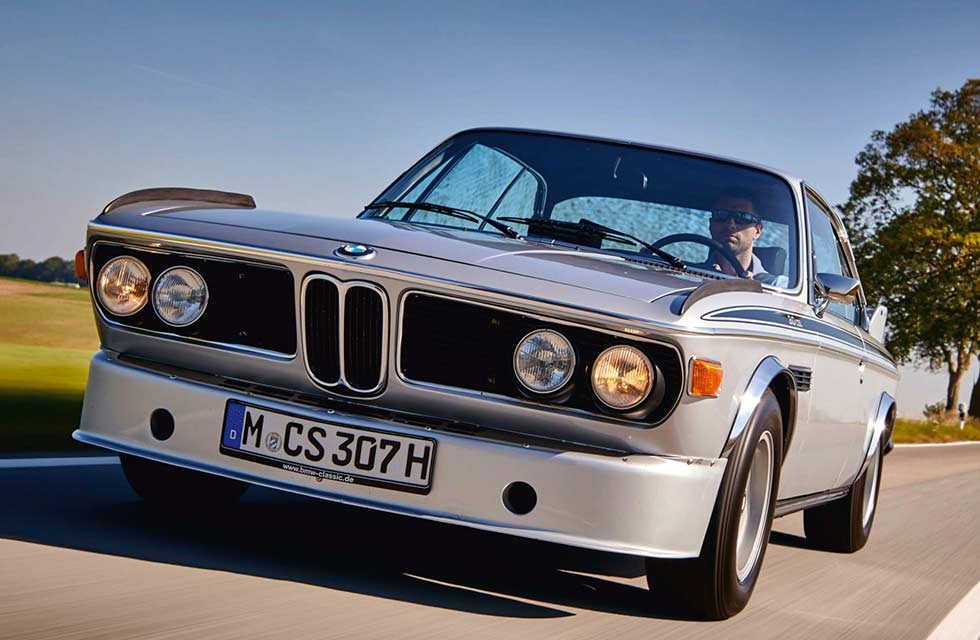 Bat out of hell 1973 BMW 3.2 CSL E9. Last year marked the 50th anniversary of one of the most outlandish cars BMW has ever built. We headed to Munich’s autobahns and surrounding country lanes to drive the CSL. By: Wilhelm Lutjeharms. Photos: Tom Kirkpatrick.

The moment I clap eyes on it as I walk trough the beautiful arched entrance of BMW Classic, the parked CSL leaves an indelible mark.

BMW’s E9 coupé is unquestionably one of the 1970s’ prettiest automotive shapes. The same can’t be said of the CSL because some of these cars, especially those fitted with the optional aerodynamic package, were manufactured to fulfil the homologation rules required for its racecars. Function very much dictated form.

The result is that the elegant E9 coupé adopted a lower front bumper with two holes for airflow, a roof spoiler (with a small centre support arm) and that rear wing. Interestingly, these aero packages were never homologated for the road cars but they could be ordered with the 151 kW 3,2-litre versions, of which only 167 were produced.

Instead of factory-fitted, they were shipped with the car for the owner or dealer to install. Produced on 6 August 1973, this very car was delivered to a dealer in Austria mid-October that same year. Four decades on, in 2010 BMW added it to the collection. While all CSL road cars had a “3.0” badge, this unit features an engine displacement of 3,153cc.

I lower myself into the driver’s bucket, a proper sports seat that supports my entire body all the way to my shoulders. It is very comfortable and the driving position is spot on. This is not always the case with classic cars; the Lamborghini Miura and its contorted seating position is a case in point. The CSL’s two (smaller) rear seats are also ornately sculptured.

The thin-rimmed steering wheel, with its drilled spokes, feels fantastic, as does the Alpina gearlever (parts could be ordered directly from Alpina at the time). The thin pillars and large glass surface area translate into an airy, inviting cabin. The door cards are covered with patterned vinyl with wood trimmings and there are even extravagances such as a Philips radio.

I turn the key and the engine settles into a perfect six-cylinder timbre. Being a factory-fettled classic, I can sense this car has been meticulously maintained. I would discover just how well over the next few hours. “I know a beautiful, quiet road 35 km away. Should we drive there?” asks the photographer. The BMW representative gives the thumbs up and, with a short shift action, I select first gear and pull into the road … sedately. I want to first acquaint myself with this iconic car.

As we make our way through Munich’s traffic, it’s apparent the brakes are perfectly calibrated. They bite with conviction and cement your level of trust. The pedals are perfectly positioned for heel-and-toe work; once the brake pedal is pressed, it is perfectly in line with the throttle.

The CSL stands out among the modern cars (there are not a lot of bakkies on German roads) and I spot a number of enthusiasts looking on in disbelief. The engine is surprisingly tractable. Keep the revs between 2 000 and 3 000 r/min, and the six feels brawny, while there is a lightness to the CSL I didn’t expect. Top gear (fourth) can be selected at low speeds without labouring the engine.

The first real revelation comes when our escort, a BMW Group Classic X5, heads onto the autobahn and quickly picks up speed. I oblige and plant my foot. The needle quickly moves past 150, then 170 and 190. Seconds later, we’re cruising at an easy 200 km/h. It feels solid at these speeds and I don’t doubt it can clock its claimed top speed of 220 km/h.

After only a few kilometres, we turn off the autobahn and pass through a few small villages before arriving at a stretch of twisting tarmac. Although I am always extremely cautious with a classic car, I’ve been given the go-ahead to explore what the CSL offers. I relish the way the engine pulls with vigour from below 3,000rpm and then, as you pass 5000rpm, an intense, raw, high-pitched metallic sound takes over.

The engine zings in the upper part of the rev range and is extremely responsive; a perfect combination. The vehicle’s racing pedigree is evident in its stability through corners. Shifting through the four gears is effortless and encouragingly direct. Managing the steering wheel is another highlight.

There is a constant stream of feedback, the likes of which modern cars can’t replicate. Having also driven a 1973 Porsche 911 Carrera 2,7 RS, I found myself comparing these two icons. Currently, the RS is valued up to three times as much as the BMW. This doesn’t make sense if you consider their racing pedigree. Their production runs are similar (only 1,265 CSLs were produced) and both are intensely pleasurable to drive. Is the Porsche overvalued, or the CSL undervalued? I suspect it’s the latter.

01 The wings were not fitted at the factory but by the owner or dealer.

02 Driving position is great and the manual lever a joy to use.

03 Simple but functional cabin with all the basic luxuries you may need.

04 Even in Germany, the CSL draws a lot of attention from fellow road users.

06 Engine has an abundance of torque but is also happy to rev to the redline.