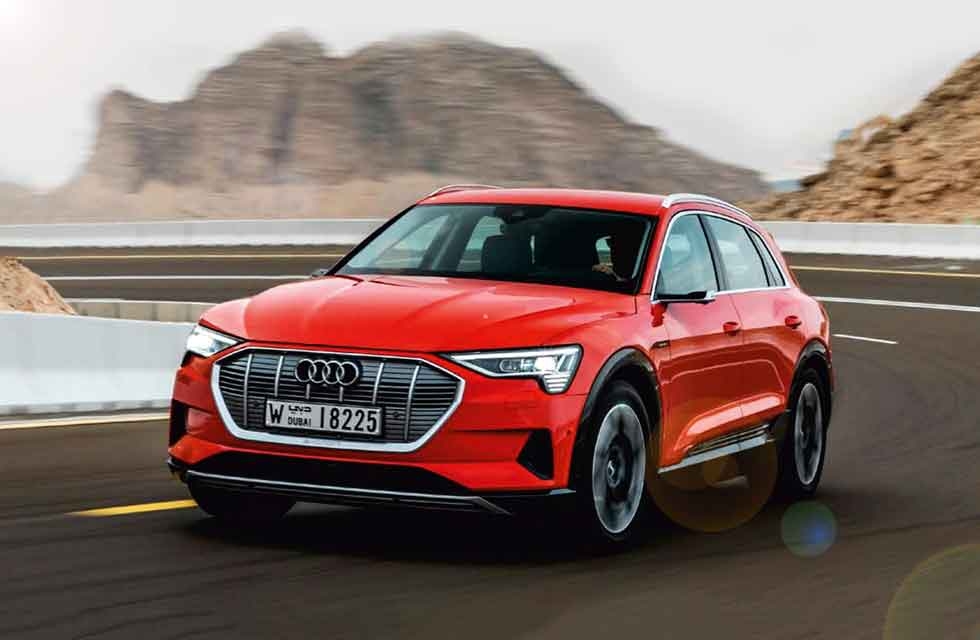 What a metaphor, launching an electric vehicle in the oil-obsessed United Arab Emirates. If Audi’s E-tron can succeed here, it can succeed anywhere. That’s the plan, at least.

IT’S NOT ABOUT THE CAR WE DRIVE AUDI’S E-TRON The new EV benchmark!

Purgatory. That’s not where we are but it’s an accurate description of the South African electric-vehicle landscape right now. Everywhere, manufacturers of next-generation zero-emissions vehicles are investing billions. As far as infrastructure goes, however, there is no “roadmap” for implementation in South Africa. Just like Dante’s poem of the same title, “Purgatory shall produce a patient and humble soul resigned to divine will.” That’s us, waiting for someone – government; OEMs; private sector; a partnership of all three? – to plug us in and make EVs feasible.

This lofty thought is put on hold as the world’s media gathers for the first drive of the all-electric Audi E-tron. Our start point is Masdar City, which functions completely off the grid and has ready-built chargers for an EV’s all-important power fix. At first glance, the E-tron is conservatively styled, like a cross between an A6 Allroad and a Q7.

Then you consider Marc Lichte’s nuanced design; subtle in places and edgy in others, it makes a concerted effort to honour existing forms while underlining futuristic detail and incorporating sophisticated aerodynamics.

The emphasis of sharp lines and triangular shapes, such as the flow-optimised wheels, LED daytime-running lights and wraparound taillamps, are obvious enough, but it’s the prominent cladding between the front and rear wheels which highlight it as an EV. That’s where the batteries live.

With them fully charged, 500 km of highway, urban, dynamic and gravel driving lies ahead, with a 150 kWh fast charge at the halfway point to replenish 80% of the battery in 30 minutes. Audi claims a 400 km cruising range, which should provide an angst-free 250 km zip to our first scheduled stop atop Jebel Hafeet, with a spectacular, switch-backed stretch of asphalt leading up it more suited to an R8 supercar than a 2,5-tonne electric SUV.

Climbing aboard, the E-tron has a pleasingly gimmick-free interior, although the raised centre console and slim glasshouse do initially feel constrictive.

Its designer talks up the cocooning effect but this is more a symptom of stowing an entire skateboard of batteries beneath the floor and having an electric motor at each axle. The battery unit consists of 432 cells, it weighs 700 kg and measures 2 280 x 1 630 x 340 mm.

Size-wise, the E–tron is a few millimetres shorter front to rear, top to bottom, than a Q7, and there’s seating for five adults with a Q7-besting 660-litre boot growing to 1 725 litres with the rear seats folded down.

This practicality is aided by top-level digital tech with a TFT Virtual Cockpit ahead of the driver and two prominent screens positioned on the facia: one with emphasis on sat-nav/ MMI and the other configurable to preferences like climate control or graphical tracking of energy flow. And, of course, there are the virtual mirrors, a world-first for any production car, which don’t only look brilliant, but have an even greater aerodynamic benefit: they slim the width of the car by 150 mm and cut drag to 0,27 Cd. Equipped with conventional wing mirrors, the figure increases to 0,28 Cd and so undoing some of the aerodynamic gains from computer-controlled radiator ducts, a flat underbody and the long-edged roof spoiler.

Operating the E–tron is simple enough. The starter button, transmission selector and Drive Select all live in close proximity on the centre console and they’re the sole stand-alone buttons. Hitting the starter summons the instrumentation/ infotainment and, with no engine noise, your next target is a futuristic-looking drive selector with the self-explanatory D, N, R and P to operate the vehicle’s single-speed transmission. The car is still to be fitted with its government-mandated low-speed warning sound to alert pedestrians and animals to its presence below 30 km/h, so less attentive onlookers get the fright of their lives as the convoy glides noiselessly out of Masdar City. Later, an Audi engineer plays the sound for us and it echoes a small V8. Bonus. On the motorway while cruising at the 140 km/h speed limit aided by adaptive cruise control and lane-keeping assist, the E-tron is supremely relaxing. However, the virtual mirrors do require some getting used to. The cameras feed images to two digital screens on the inside of the doors but they’re positioned a few centimetres below where your eye instinctively travels to check your mirrors and it does take a concerted effort to drop them further. What’s more, it takes time to trust the image contained therein has no blind spots because adjusting your line-of-sight doesn’t alter the camera’s display.

From the outset, the range readout has stayed constant at around 350 km as the distance to our destination tumbles. But, off the motorway, we forget the range and toggle from efficiency to dynamic to unleash the drivetrain’s paciest setting.

Fed by the 95 kWh lithium-ion battery, the two electric motors are near-identical, generating 125 kW up front and 140 kW at the rear for better traction and balance. Together in boost mode, the total output is 300 kW and 664 N.m torque. This will see you accelerate from 0-100 km/h in just 5,7 seconds (and 6,4 with boost mode deactivated).

Starting our ascent of Jebel Hafeet, the hills are alive with the sound of … precious little, except the murmur of hot, fat rubber meeting tarmac. While the E-tron’s handling ability is of purely academic interest in the greater context of electric mobility, we’re fascinated to see how a fully loaded EV handles a road which is quite clearly a drivers’ paradise, with rubber 11s charred into every hairpin. The answer is: only as dynamically as you make concessions for. The battery’s unique positioning in the long, heavy wheelbase adds enough weight to flatten road imperfections, but any benefit of a low centre of gravity is offset by the sheer mass of the vehicle. The turn-in is urgent and pitch and roll are neutralised to an extent by standard-fit air suspension, but unleashing instant punch from the electric motors can leave the vehicle lurching mid-corner if you’re greedy with the throttle.

This brings the axle-by-axle torque-vectoring into play, where an inside wheel is braked and the outer accelerated to keep you in line. Clever electronics can adjust drive in just 30 milliseconds, 50 times faster than conventional Quattro. With all this intervention going on, the E-tron doesn’t major in driver involvement. Feedback from the steering, brake pedal, chassis and electric motors is minimal. And that’s absolutely fine considering the nature of the vehicle.

Once at the summit, we head back down to test something more relevant: brake regeneration. Operated via paddle shifters, there are three levels to its recuperative force. The drive up wiped out 25 km of range but purring back down regenerates 8 km.

In that respect, this hasn’t been your typical EV drive because the dreaded range anxiety has largely been absent, the route carefully calculated within the car’s range remit. Should Audi SA follow the lead from overseas when the Etron reaches South African shores in Q4, three charging solutions will be offered. They include compact (up to 11 kWh AC home charging which will replenish the battery in eight hours; connect (up to 22 kWh AC home charging which can be controlled via the myAudi app and recharged in roughly half the time: four hours); and 150 kWh fast chargers accessible with an E–tron Charging Card, or activated via QR code on your smartphone after registration on the myAudi app, with charging billed each month. Although it’s early days and Eskom electricity prices do fluctuate, we estimate a full 95 kWh recharge at home would cost between R300 and R350.

The E-tron isn’t a complete game-changer but it is plainly a technological tour de force that should get people charged up for electric mobility. If we were to level any criticism at it, it’d be the virtual wing mirrors need further refinement and Audi should explore lightweight componentry beyond the vehicle’s aluminium and steel structure. Although that’s not where the real challenge lies because now that we’ve driven the E-tron, we’re left with a lot of promises about the future and we suspect the difficult work to make them happen is only just beginning. Honing advanced engineering is one thing but finding leadership with the expertise to implement wholesale policy change in the absence of a convincing EV strategy, particularly in South Africa, is where the true challenge lies. So, like the title of this story, it’s not really about the car.

Clockwise from right Note the screen instead of side mirrors; space is abundant at the rear; cockpit eschews physical buttons in favour of large touchscreens.

Pros: alongside Jaguar I-Pace, a whole new world of mobility Con: no EV incentives in SA as yet