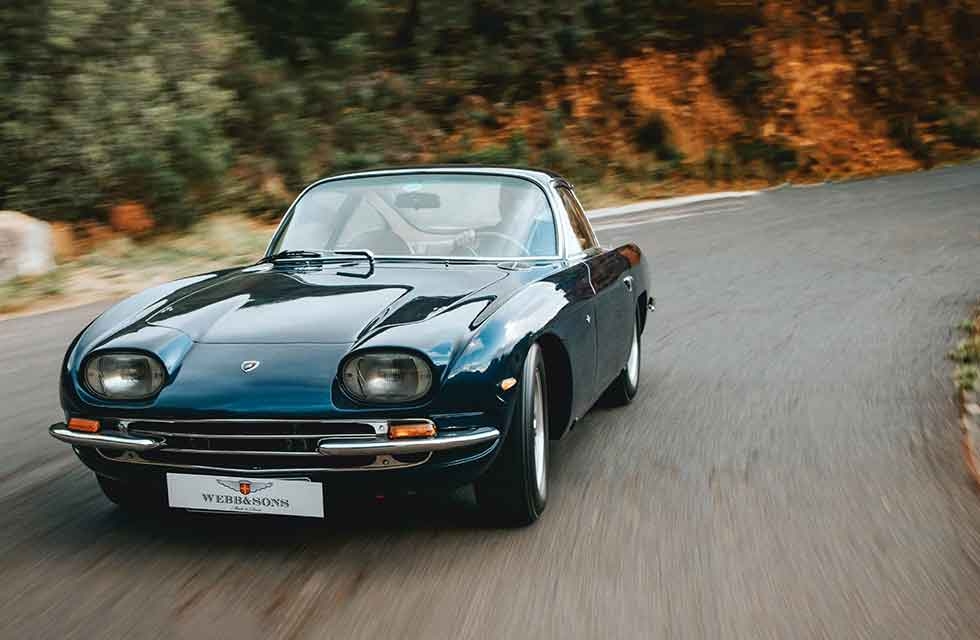 It’s strikingly sleek and elegant. The glass area is large, allowing for an abundance of light to stream into the cabin. On a fine summer’s morning like today, life is beautiful.

The history of why Ferruccio Lamborghini produced his own cars at a time when he was building agricultural equipment is well documented. Needless to say, as with the start of any new product or the first few items rolling off a production line, 350 GTs are scarce. Franco Scaglione conceived the original prototype, while Carrozzeria Touring was responsible for the production cars. Incidentally, they also produced two Spyder versions collectively called the 350 GTS.

This car (chassis number 0301 with engine no. 0298) has an interesting history. It is not only the oldest Lamborghini in South Africa, but also the first one imported to SA. Richard Webb of The Archive in Cape Town, the car’s current custodian, explains: “Paul Cox from the UK, who is part of the 350 GT registry, confirmed this was the first Lambo brought to South Africa. He has been tracking this car most of his adult life. He even flew out to SA to buy the car but, at that stage, the price seemed too steep.

“This 350 GT’s original factory colour was Grigio Saint Vincent grey with a tan leather interior. Somewhere in its lifespan, its owner painted it orange while both front and rear windscreens were replaced with Perspex. However, it was restored and is now due for another restoration. We already have the details of the specialists in Italy to whom we need to send the engine and gearbox to have them rebuilt.”

As I open the door and lower myself into the comfortable seat, I’m struck by how close I am to the dashboard, windscreen and A-pillar, while behind me there is ample space for luggage. As the seat can move far back, though, tall drivers do fit behind the metal-and-wood steering wheel and there is ample headroom.

The wheel is large, which offers welcome leverage at lower speeds, and through it you can see beautiful, classic Jaeger dials with the yellow Lamborghini Raging Bull emblems sited at the bottom of the rev counter and speedometer.

To the right is a tall instrument tower with a row of additional dials, lights and no fewer than seven toggle switches. There are even buttons for the electric side windows. Ahead, the bonnet flows away to the curved fenders, an evocative reminder you are piloting a front-engined GT.

When you turn the key and the V12 erupts with a bark, the soul of this car awakens. And the 3,5-litre engine with its twin-barrel side-draught Weber carburettors is all too eager to disarm with its rorty nature every time you blip the throttle.

Below Table Mountain, the road twists and turns but, between the corners, the 350 GT is eager to clear its throat and there is an evident keenness to run higher into the rev range.

Blipping the throttle between gearchanges assists with a smoother action. Shifts need a strong arm as the lever has an overly mechanical action that can’t be rushed. The popping and banging from the exhaust pipes (and even a flame or two) indicate the engine is in need of some tuning but, overall, the cacophony contributes to the experience and excites every time you press the throttle. As you would expect, there is body roll but that certainly does not detract from the driving experience.

Before I return the key, I take one final look. There are a number of wonderful design highlights such as rear wheelarches covering the upper part of the wheels and a flat, horizontal rear deck rising steeply to meet the glasshouse. It’s a stunning piece of design.

Striking as the GT may be, though, the real star of the show is the fabulous V12. As it is now, so it was with car number one…

When you turn the key and the V12 erupts with a bark, the soul of this car awakens. The 3 5-litre is all too eager to disarm with its roarty nature every time you blip the throttle.

02 The chrome bumper is split in two and each section sits atop dual exhaust pipes.

07 This is how a facia should look: peppered with intricately engineered dials and toggles.

11 The GT’s successor switched to double lights a side.

What you need to know

After showing the car at the Geneva Motor Show in 1964, Lamborghini started building the 350 GT only two months later. Just 120 units were produced.