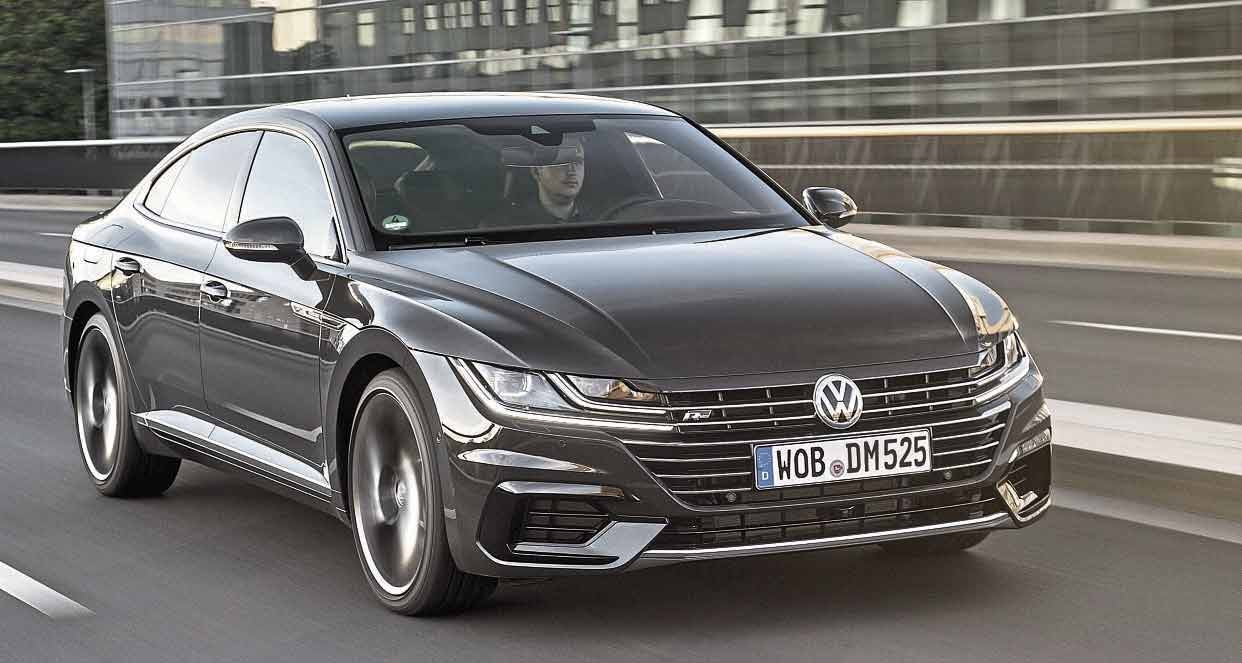 Driving impressions 2019 Volkswagen Arteon R line 2.0 TSI 280 PS 4Motion DSG. After spending two weeks behind the wheel of the 280 PS Arteon R line, Ian Kuah concludes that it not only looks great, but is great…

Based on the Mercedes-Benz E-Class W211 saloon, the CLS C219 of 2004 was the progenitor of the four-door coupé genre, a theme that was picked up in 2008 by the VW Passat CC, as a more visually appealing version of the Passat saloon. But the separation in terms of image and pricing was not huge, leaving a massive gulf between the CC and Volkswagen’s flagship, the Phaeton.

At a glance, some would say that the more recent Arteon is a replacement for the Passat CC, but in reality its totally different styling, packaging, and far superior cabin room give the lie to that.

With no obvious Passat design cues evident in its sleek five-door fastback shape the Arteon clearly bridges the gulf between the current Passat and the now defunct Phaeton. In this respect it is VW’s spiritual counterpart to the more expensive and prestigious Audi A7.

My Arteon journey started at Munich Airport and for the next two days the Arteon and I became acquainted over the short run down from my hotel to the MOC exhibition centre, where the annual Munich High-End audio show was being held back in mid-May. Amongst other things, that 20-minute run on the autobahn gave me the chance to become familiar with the sat-nav, audio system, and suspension mode controls.

Driving a wide variety of test cars from different manufacturers has given me a good sense of how to operate the increasingly feature-laden infotainment systems that come with today’s cars.

Part of the infotainment suite was the touchscreen operated central control screen that controls everything from suspension modes to the Dynaudio sound system. The latter is fed from either a USB port in the centre console cubby or the optional DVD player in the glovebox.

Fortunately, the latter allowed me to play my test audio CD to assess the system as, like many USB fed systems in the latest cars, the head unit that Volkswagen has paired with the Dynaudio amplifiers and speakers is unable to read high-resolution music files.

I find this very annoying as manufacturers entice buyers to tick the box for a high-end sound system clearly capable of great resolution, but in a move away from CD/DVD players, they then do not provide the means to play back high-res files. The Dynaudio system is more than good enough to highlight the compression in MP3 or MP4a files so this is annoying, and something that needs to be recognised and addressed.

The gradual departure of more and more high-end audio manufacturers from the CES show in Las Vegas over the last three years means that Munich High-End has increasingly become the most important high-end audio show on the international circuit.

With more and more domestic audio companies like Burmester, B&W, Dynaudio, Harman Kardon and Naim now paired with car manufacturers it is no surprise that some of these companies have test cars at the Munich High-End show.

I dropped in on the Burmester and Dynaudio stands to speak with their car audio people. It was a good chance for me to air my grievances to Dynaudio about the high-resolution files issue on the USB only systems.

Interestingly, the head units of the Burmester high-end audio systems used by Mercedes and Porsche do not suffer from this issue and are able to read high-res files. It is really a line of code that enables this function as opposed to an expensive piece of hardware, so there is really no excuse for selling expensive four-figure audio systems that do not have the ability to read the best quality software.

While I initially lamented the lack of a V6 engine option for the Arteon at its launch last year, in terms of sheer speed on the autobahn, thrust for overtaking on country roads, and its long-distance cruising ability at the other end of the spectrum, the 280 hp 2.0-litre TSI engine does actually deliver the goods quite convincingly, especially in conjunction with the 7-speed DSG transmission and 4Motion drivetrain that is exclusive to this combination.

While it may have less acoustic charisma than a big V6, the Volkswagen Group’s ubiquitous turbocharged 1984cc twin balancer shaft engine has a distinctive sporty rumbling acoustic that is not as anodyne as the fours from rival manufacturers.

The 4Motion all-wheel-drive perfectly dispenses the 280 hp and 350 Nm of torque to despatch the 0-100 kph sprint in just 5.6 seconds, with its top speed electronically limited to 250 kph (155mph). The Arteon rockets up to 200 kph fairly rapidly, but then its relatively small turbo engine starts to run out of puff. Getting up to 230 kph is not a huge effort on a long stretch of autobahn, but that last 20 kph is definitely hard won.

On the chassis front, each mode of the electronically controlled DCC dampers makes a significant difference to the ride and handling, the effect of each setting being distinctly discernible in terms of its control of bump and rebound damping.

While I appreciate the Comfort setting for its ability to round off bumps around town, body control becomes too loose for my liking once you get much above 80 kph. The Comfort sitting is certainly not recommended for high motorway speeds where discomfort is induced by excessive body motion and a less precise response to steering input. At the other end of the scale the Sport setting clearly works best for attacking smooth, winding roads, with the operative word being ‘smooth’. Feedback from bumps to the seat of your pants on fast country roads is a bit sudden, and I did not even particularly like it on the autobahn.

The R-Line comes with 19-inch alloy wheels as standard, but my test car had the optional 8.0J x 20s, with their good-looking and easy to clean ‘fan blades’ painted in fashionable satin black. The sidewalls of the 245/35 R20 Pirelli P-Zero tyres clearly do a lot of the heavy lifting for the suspension so Normal mode, with its good balance of bump, rebound and body control, proved to be the best all-rounder and became my default choice. The chassis engineers did good work on NVH as even this combination of big wheels and ultra-low profile tyre exhibited remarkably low road noise.

With the chassis set up to my liking I found the power steering spot-on in terms of weight and feel, and the way the car turns into bends and allows you to deploy its not inconsiderable engine power is very confidence inspiring.

Although I never actually had to dodge the rain during my photo-shoots, it rained quite heavily at times en route to my appointments. The wet conditions served to highlight the supreme traction and stability conferred by the 4Motion all wheel- drive. At other times just being able to confidently deploy the full engine power away from T-junctions to slot into small gaps in heavy traffic without a trace of wheelspin was a boon.

One such day was when I crossed the German border to see my old friend, Karl- Heinz (Charly) Feustel, owner of Raceline Feustel, one of the world’s finest classic Porsche restoration companies. Charly and his small team had recently moved from Heischeid, a small village near Cologne to Neunkirch, a small village near Schaffhausen in Switzerland, and I owed him a visit.

After the grand tour of his new facilities we went to lunch. The venue, the Klettgauerhof Weinstube in the nearby village of Klettgau, was interesting because the owner’s father was Steve McQueen’s chef in the movie Le Mans. He tells a good story that motorsport buffs will find fascinating. Thanks to its 2837 mm wheelbase, cabin space is an Arteon strong suit. While this is a fairly low car to get in and out of thanks to its sporting four-door coupe demeanour, once you are seated it impresses with its sense of space and quality furnishings.

The electric memory seats and steering wheel that is manually adjustable for reach and rake ensure that drivers of varied heights should be able to find their ideal seating position. The ergo Comfort seats fitted to the test car also feature an electrically adjustable lumbar support and a back massage function that I used frequently.

The rear cabin has more than generous legroom, at least equal to a standard wheelbase Audi A8, and despite the Arteon’s fastback roofline its rear seat headroom works just fine for a six-footer.

Open the tailgate and you find a truly enormous 563-litre boot whose floor area equals that of a large estate car, albeit without an equally generous load height. Fold the rear seat and you have a cargo area able to swallow some quite large items. Over the next few days I visited half a dozen German tuners including ABT Sportsline and MTM, whose RS4-R and RS5 I tested respectively. Quite telling was the fact that no matter which tuned high-performance car or supercar I tested on a given day I never felt hard done by when I got back into the Arteon and drove away.

If anything, in some instances after spending some hours in a low, cramped and hard sprung supercar, I was actually very glad to be back in the Arteon with its comfortable massage seats, cold air-conditioning, and decent stereo.

After covering over 2,300 km during the 14 days, in various weather conditions on a myriad of roads in Germany and Switzerland, I really warmed to the Arteon, which had slowly revealed its deep well of talent.

In the end, the one abiding memory I have of VW’s new five-door coupé is its fine overall balance and comfort, and the unerring stability conferred by its long wheelbase, wide tracks and all-wheel-drive. This is a car I was very happy to live with for two weeks, and I am sure it will be a good car for an owner to live with over a much longer period.

‘The 280 hp 2.0-litre TSI engine delivers the goods quite convincingly’