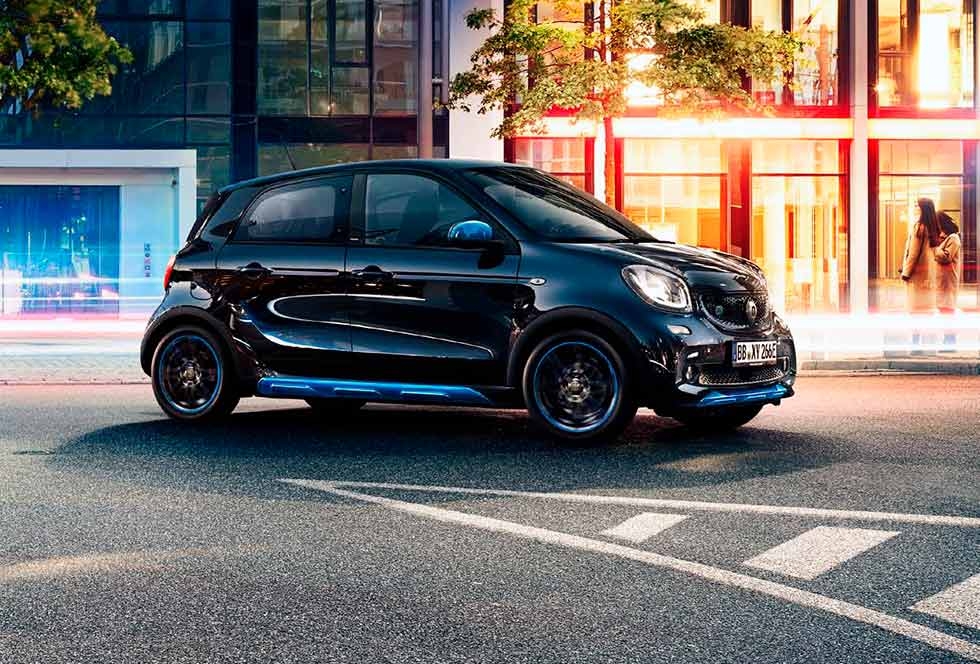 2019 Smart Forfour Electric Drive (EQ) Smart is the first Mercedes-Benz brand to have its cars adorned with the new ‘EQ’ nomenclature and is also one of the only car makers in the world to offer its entire range in electric form. Jonathan Musk drives the current generation to find out what it’s all about. Words: Jonathan Musk. Photos: Smart.

The latest generation of smart cars, ranges from the diminutive two-seat “fortwo”, to its convertible counterpart and the four-seat variant, the forfour. While the old smart electric drive was fettled by Tesla, this time around smart teamed up with Renault to co-produce the forfour and the Twingo in the same factory.

Naturally, this causes either concern or pleasure. On the one hand, the Twingo is a fine small car, sporting an unusual setup by way of rear engine and rear-wheel drive. However, its lacklustre petrol engine isn’t wonderful, its gear-change is pretty dire and what might have been a relatively practical boot, or opening space up-front due to no engine, was quashed by the rear engine setup and somehow stuffing a load of equipment under the bonnet meant there was no additional passenger storage there either.

In electric form and with a smart badge, however, it’s an altogether different proposition.

Basic is about as luxurious as it gets.   However, there are neat little design tweaks to be found all over the cabin and there was never a feeling that it needed more storage space. The cabin is adequately appointed for the type of car that it is, with a soft material-topped dashboard, decent-sized central touch screen straight from Renault, but with some rebranding to become a smart – and there’s nothing wrong with any of that. The rear seats might have been better designed so as to offer more ‘smart’ flexibility, but generally speaking they weren’t bad and certainly offer more practicality than the fortwo. Buyers can choose between a continuous rear bench or optional “readyspace” seats that fold into the footwell before the backs fold down, adding extra load lugging ability if needed.

The nav is, as mentioned, straight from Renault, but it has everything you might want including battery and charging information, road stats and figures, sat nav and the usual infotainment too. The design is fun and functional and does the job needed of it, but doesn’t really go beyond.

Elsewhere in the cabin, there are the usual smart oddities, such as the extra pod stuck onto the dash to offer the driver range at a glance and power being used at any time. However, the layout is a touch confusing, especially for a vehicle that’s as basic as it gets. A smart mobile app can be used to enable preheating or cooling so long as the car is still plugged into the mains, as well as offering charge level and available range.

The first thing that strikes you upon sitting in the driver’s seat is that getting comfortable in the car is a bit of an art form. It’s not that the seat itself is uncomfy, but a lack of steering wheel adjustment means if you’re a tall driver you might reach the pedals but not the wheel, or you’ll be unable to see the 3.5-inch digital dash readout. Nevertheless, around town the smart forfour electric (EQ) is astonishingly adept at feeling like it’s the quickest thing around. It’s as though nobody can come close to its instant power, and it’s always the first thing to leave a junction. As with all electric cars, this isn’t its only trick, as hard acceleration will quickly see your range plummet, but instead its best trick is its versatility on the road that leads to a calm and controlled drive. Whether you wish to crawl along in stop-start traffic or cruise at any speed, no matter how low, or if you wish to hammer along a motorway, the smart will do it and does it mostly well.

A party piece of the smart forfour EQ is its radar assisted regenerative braking, which monitors traffic ahead and adjusts the braking force accordingly. In practice, it can make it a little difficult to judge whereas a constant force might be simpler to anticipate.

Because it’s small and has a low-centre of gravity, corners become a fun challenge rather than obstacles that hinder progress too. It is a delight to drive and belies its on paper performance specs.

Urban landscapes are this car’s natural habitat and at just 3.49 metres long, it’s a doddle to park. Its turning circle is tight too, making manoeuvring effortless. An audible alert can be specified so that pedestrians are alerted to your presence at speeds up to 17mph, thereafter tyre noise takes its place.

Venture onto a motorway and it surprisingly manages to keep pace with traffic while retaining its surefootedness. The usual small car attributes apply though, such as there’s a bit too much road noise due to a lack of sound insulation and everything else on the roads [read: SUVs] look big and scary.

Range is an adequate 100 miles maximum, though in reality (and in no small part due to the addictive acceleration) you’re more likely to observe 70-miles. While that might strike you as low, it’s plenty for a shopping or school run car and, let’s face it, this is really intended as a second car to complement something else for longer range. To that end, the car isn’t equipped with any form of rapid charging, although smart has confirmed that new EQ branded models can get an optional in-built 22kW charger (a £275 option) that’s good for 0-80% charge in around 40 minutes. Otherwise, you’ll be in for a wait, as the car takes 3.5 hours to charge the 17.6kWh lithium-ion battery from 20-100%.

If it can fit into your lifestyle, or you’re a two car household with one car used for local journeys, the smart forfour is perhaps the most fun choice there is. It retains much of the charm of older electric smart, but with the added versatility of four seats and a small boot. Though it is small, it is strangely practical and certainly during my week with the car, it never felt inadequate in any way. If only to experience the sheer thrill of driving something so alive, it gets the thumbs up from us, though a lack of any real-world rapid charging is a bit of a let down.

And then there’s the competition. There’s no question the smart is priced high, especially when considering the Renault Zoe undercuts it yet offers a larger and arguably more capable vehicle with a longer range and rapid charging as standard. Volkswagen’s e-up! falls into very similar territory and is better built and just as much fun, but is even more pricey. This leaves the forfour in a rather smart position: if you like it, can abide by its quirkiness and don’t mind its shortcomings as a car, it’ll save you more over the years to come than its on-initial glance price might dissuade you. With new EQ badging too, it feels like something a little more special than it ought to. The acid test, however, is whether or not I miss it now that it’s returned to smart and I’m pleased to say I do – and that, in many ways, says it all.