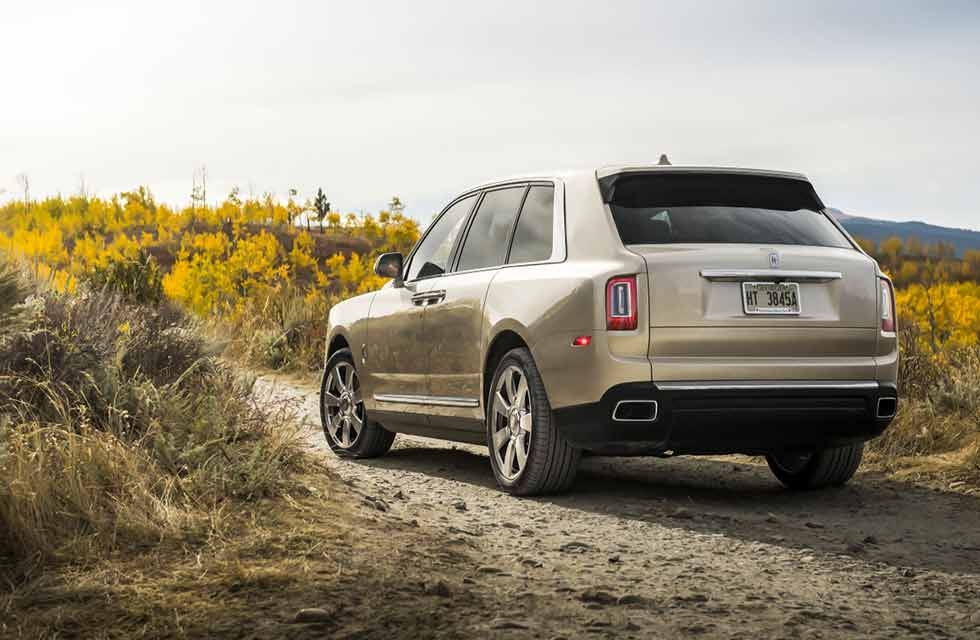 No one struggled with the concept of a Rolls-Royce SUV more than Rolls-Royce. In 2015, after 111 years of producing opulent sedans and coupes, the automaker announced an SUV would be joining the fleet. You know how it is, they said, sheepishly. Extensive customer requests. Luxury is evolving. You always wanted a brother.

It felt blasphemous. Luxury SUVs are for people who made bank selling illegal substances or people who replace the Ss in their names with dollar signs or, at the very least, for convoys of villains approaching desert lairs in a certain brand of action movie. They are not for the whispered ancient luxury of Rolls-Royce.

Richard Carter, director of global communications, laughed as he introduced the Cullinan to a group of journalists invited to Jackson, Wyoming. Would you believe, he wondered aloud, that we’d ever be using the words “utilitarian” and “Rolls-Royce” in the same sentence?

He was anxious that we understood the pains the company had taken to make certain the Cullinan looked the part. “We all know the silhouette of the Rolls-Royce is sacred,” added Alex Innes, head of coachbuild design. Rolls-Royces are known for long hoods, short front overhangs, and a 2:1 ratio of the height of the roofline to the height of the wheels. Passengers are ordinarily hidden from the unseemly world, reclining deep behind the C-pillar.

The Cullinan indeed invokes a sense of gravitas—perhaps not so much in the flippant red of one test car, which felt too close to Roll$-Royce, but certainly in deep Tungsten gray. The front fascia makes it look like a sage cousin to the Phantom, if not a full sibling. The side and rear views aren’t quite as successful: handsome enough, but not dissimilar to the current Range Rover (pertinently, the SUV the automaker notes is most likely to share garage space with a Rolls-Royce).

But the Cullinan is outfitted with unmistakably Rolls-Royce touches: long hood, hand-polished grille, suicide doors that open at a touch. It towers on optional 22-inch wheels (21s are standard) and Continental tires developed specifically for the Cullinan, with foam lining to muffle the road’s screams and a special sealer to mitigate stab wounds. Inside the Tungsten specimen I drove, the leather was Rolls’s shocking Arctic white, a striking and elegant contrast. It was beautiful; whatever had died for those seats hadn’t given up its skin in vain. Rolls offers two rear configurations. The Tungsten model sported the traditional Rolls setup, two individual seats with a luxurious center console. The red Cullinan wore a more pedestrian bench seat for families who need a fifth seat for a complaining middle child.

As with the rest of the marque’s lineup, every detail that can be hand-stitched is hand-stitched; every piece that can be hand-polished is hand-polished. The steed even kneels for you to mount. Once you climb in, the Cullinan’s air suspension rises an inch and a half to its standard ride height. And it’s all topped off by the Spirit of Ecstasy above the massive grille, gazing down from higher than ever before. But it was not enough for the Cullinan to look good in pearls. The Cullinan had to also perform as an SUV while still delivering Rolls-Royce’s legendary “magic-carpet ride.” It had to float, even off-road; to be silent, even striving up an incline; and to be effortless, everywhere.

Rather than adapt an SUV architecture from parent company BMW to create its first-ever all-wheel-drive vehicle, Rolls started with its own aluminum structure. The so-called Architecture of Luxury was introduced on the Phantom VIII but was engineered from inception to be robust enough for offroad applications.

Other components, however, needed to be augmented. The air suspension, for instance, has larger external air reservoirs to accommodate greater suspension travel, and the control arms were reinforced to deal with higher curb weight and more coltish applications. Like the Phantom, the Cullinan also sports three anti-roll bars, two front—one active, one not— and an active one at the rear. The extra bar up front is one of the keys to Rolls’s oft-touted magic-carpet ride, since it allows engineers to dial in the ride/handling balance with greater precision.

When it came time to test the Cullinan’s off-roading mettle, Rolls set us loose in Jackson Hole, home to some of the nation’s steepest ski slopes. As someone who ordinarily batters tuner cars around midnight streets, I didn’t think the sword would come free from the stone under my hand, but the twinturbo 6.8-liter V-12 came to life when I pressed the ignition button. The sound was capable, restrained—understandable, considering that Rolls used the thickest glass possible and 220 pounds of sound-deadening material. The engine is essentially the same as in the Phantom and other Rolls-Royces, but with different software tuning. The housing for the Cullinan’s ZF eight-speed transmission was adapted to accommodate a transfer case for power to the front wheels. Driveshafts and axle gears were also beefed up to handle higher torque loads typically sustained during low-speed off-road driving.

As promised, the 6100-pound leviathan glided over loose stones, sparing us the boring details of off-roading. Effortless. The Cullinan is equipped with more cameras than the FBI, which took the guesswork out of perilously tight switchbacks. It can wade through 21 inches of water. A button on a steering-column stalk puts the car into low, which holds gears longer and brings engine braking to the ascent. Crawling back down an even steeper slope involved hitting the button for hill assist and removing my feet from the pedals. I’ve got this, the Cullinan said. Enjoy your mocktail.

It was quite unexciting, which is the entire point. Anything I pointed the Cullinan at, it gently crawled over, all while displaying my speed and current music selection on the head-up display. On the road, it was equally quiet and gentle, if lacking some of the poised muscle of a Ghost. This is fine, I thought.

The Cullinan has the self-contented insouciance of a vehicle that isn’t needed—it’s wanted. The actual customer for the Cullinan will most likely be one who already has a Rolls-Royce. Michael Fux, who built his fortune selling memory-foam mattresses, collects a new custom Rolls at every Pebble Beach Concours d’Elegance. His latest is a white extended-wheelbase Phantom with an interior in an exclusive shade of fuchsia named Fuxia.

It’s a world of its own; it is impossible to understand the dynamic between Rolls-Royce and its buyers unless you understand it as an artist-patron model. This dynamic means that Rolls-Royce had to take its customers’ requests for an SUV seriously, no matter how deep a challenge it represented to construct one within the brand’s tradition. Rolls makes beautiful things, but wealthy customers enable it to continue making beautiful things, at its pleasure.

Somehow, the Cullinan walks the tightrope—or, as situation would have it at the end of our trip, deeply rutted mountain roads. I asked the Rolls minder how hard I was allowed to push it. “Don’t cut a tire,” he advised. “These are road tires.” I pushed it.

The Spirit of Ecstasy bobbed and flew as I took rally lines and hurled into corners and searched for grip, teasing ever faster. It was incredible to feel a three-ton vehicle’s rear turn out beautifully and predictably, and equally astonishing to feel it drift controllably along the line set for it. Body roll was negligible.

That stiff frame paid off. I tried to make it stumble. The Cullinan refused to stumble. We stopped at the top of the mountain. The Rolls-Royce rep hugged me. He said, “That was spectacular driving!” But, really, it’s a spectacular vehicle.

A FIRST: ROLLS-ROYCE BUILDS AN SUV. NOT FIRSTS: HANDSTITCHED LEATHER SWADDLING THE CABIN, MORE SOUND DEADENING THAN A RECORDING STUDIO, AND A PLUSH RIDE.