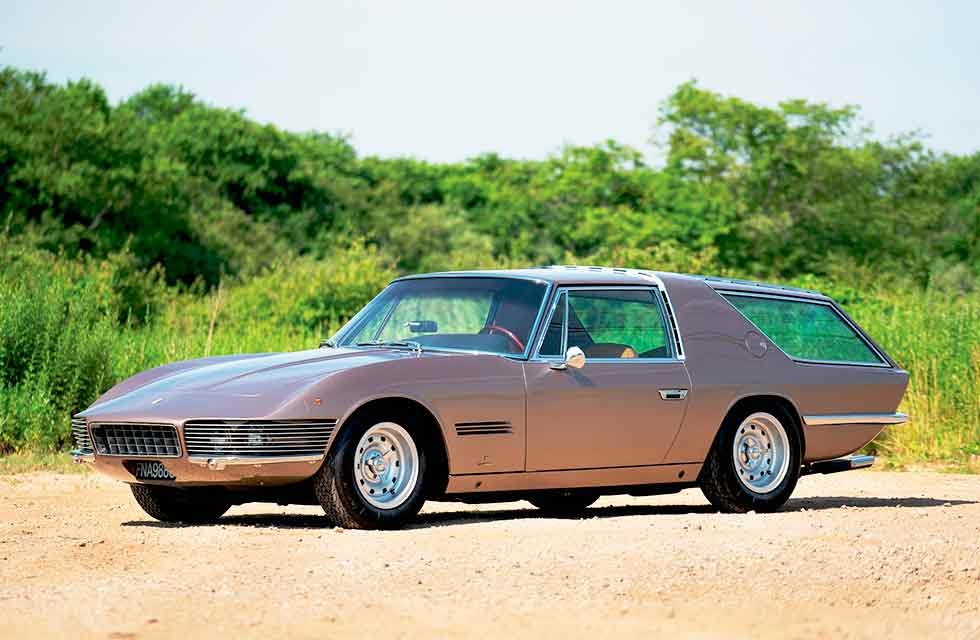 It looks as though it wandered off the set of a 1960s sci-fi flick; the sort of film that came free with a mop-top hero, a beautiful playmate with big hair and little clothing, and a soundtrack to die for. The 4.0-litre, V12-engined 330 GT 2+2 shooting brake featured here hasn’t lost the power to shock, that’s for sure. Conceived by the American Ferrari importer, Luigi Chinetti Jr, styled in part by the renowned illustrator Bob Peak, and bodied by Alfredo Vignale’s eponymous carrozzeria, it was – and remains – one of the most controversial Ferraris ever to turn a wheel.

By the time you read this, chassis number 07963 will have gone under the hammer at RM Sotheby’s end-of-year sale at the Petersen Automotive Museum, 50 years after it first broke cover at the 1968 Turin Motor Show. The new custodian will own the last Ferrari ever clothed by Vignale, and one which has enjoyed something of a critical re-evaluation of late (witness several appearances in blue-chip concours events).

It wasn’t always thus. There was a time when this car routinely topped website listicles; ‘Top 10 Ugliest Ferraris’ and so on. While the car’s outline continues to divide opinion, the passing of time has seemingly brought more people around to the ‘like’ camp. For some of us, it isn’t even the least attractive Vignale Ferrari; it isn’t even the fifth least attractive Vignale Ferrari.

For most of the 1950s, Ferrari’s road car production consisted of small-series runs, production of which often didn’t reach double figures. The Maranello firm was a boutique enterprise, one patronised by royalty, playboys, movie stars and your common-or-garden beautiful people. If you wanted a one-off, no problem. Ferrari typically sold cars as rolling chassis to be clothed by an outside coachbuilder.

During the firm’s embryonic years, this tended to be Alfredo Vignale’s tiny body shop. The son of a car painter, and the fifth of seven brothers, Alfredo took his first tentative steps into coachbuilding in 1924 on commencing his apprenticeship with Ferrero & Morandi of Turin. He was just 11 years old. Six years later, he caught the eye of Battista ‘Pinin’ Farina under whom he would complete his training. Aged 24, he was then poached by Giovanni Farina – brother of Battista and owner of Stablimenti Farina – to be his workshop foreman. Nonetheless, Vignale dreamed of being his own boss, only for World War 2 to interrupt his plans. He would have to wait until 1947 before establishing his own body shop.

Operating out of a former sawmill, his small business became a moderately sized one after Vignale landed a contract to make refrigerated storage containers. The first car to be wear his own badge was a rebodied second-hand Fiat Topolino. What’s more, he had by now embarked on what would prove a long and fruitful relationship with fellow Stablimenti Farina alumnus, Giovanni Michelotti. The two friends became regular collaborators, Michelotti producing renderings which Vignale turned into three-dimensional reality. Such was Carrozzeria Vignale’s burgeoning reputation, it rapidly became Ferrari’s couturier of choice.

A bewildering array of coachbuilt offerings would follow. If there was one common characteristic, it’s that Vignale offerings were bold and often startlingly modern-looking. This symbiotic relationship would, however, last only a few years. While notoriously impassionate about his road-going wares, Enzo Ferrari was astute enough to realise that having them completed with an endless array of body styles resulted in a degree of uncertainty as to how they would turn out. He wanted greater uniformity. He needed a partner, a carrozzeria of choice, and it wasn’t Vignale. It is widely held that around 150 Ferraris were bodied by the Turin concern from 1950 to 1955, before Pinin Farina assumed the mantle. There wouldn’t be another Vignale Ferrari until 1968 – this one.

A fair amount of bovine do-do has been excreted about this car in print and on the internet. The truth is this: the donor car was imported into the USA in 1965 by Luigi Chinetti Motors of Greenwich, Connecticut and sold to a Mr Desy. It was originally red with a beige interior. Two years later, the 330 GT 2+2 returned to the dealership and Chinetti Jr – or ‘Coco’ as he was then universally known – was tasked with selling it. “Man, that was tough!” he recalls. “Nobody wanted them new, and I couldn’t give it away as a used car. I was interested in design, and sketched out my ideas, and that car seemed like the perfect basis for what I had in mind. Bob Peak was a good friend and an excellent artist who lived just up the street from me.

He did a lot of famous movie posters, including those for West Side Story, My Fair Lady, Apocalypse Now and some of the James Bond movies. He also illustrated the cover of Time magazine a whole bunch of times, and did a ton of car advertisement and brochure illustrations. Bob also loved cars and we just hit it off.”

Their first collaboration was a gullwing-doored device based on a 275 P sports-prototype that was damaged in a race at St Jovite with Chinetti Jr at the wheel. They followed this Michelotti-constructed confection with something a bit more practical. “I always liked the concept of the ‘shooting brake’,” Chinetti muses. “There was something uniquely British about something sporting but also elegant and practical. I wanted to do something similar. In America, they’re called ‘station wagons’, but I always referred to this car, and the Daytona rebody we did later, as ‘Extended Coupes’. Anyway, I sketched out a few ideas and then Bob took them and worked in his own.”

There was then the small matter of finding someone to fashion their starry-eyed vision. “I went to see Alfredo Vignale and he couldn’t have been nicer. You know, back then guys like Vignale and Michelotti were true artists. They wouldn’t stick their noses in the air around guys like me. There wasn’t one panel on that car that was shared with the original 330 GT 2+2, other than part of the doors, and I really liked the way it turned out. You have to remember, we didn’t do a scale model beforehand or anything like that. If I had to do it over again knowing what I know now, I would have had a windshield made, rather than using the one from the 330. Something less curved would have looked better. Overall, though, I thought it looked pretty nifty. I still do.” Unveiled at the 1968 Turin Motor Show, the Ferrari ‘wagon’ was met with both muted praise and derision. Some arbiters of beauty admitted to liking the concealed headlights and other details, if not necessarily the overall outline. Then there was Cyril Posthumus. In his six-page review of new cars and concepts at the Turin Motor Show for Road & Track magazine, the Briton well and truly got his knickers in a twist. Having erroneously described the car as being based on a 365 GTC chassis, he labelled it ‘deplorable’ before adding: “In effect, they’ve taken a 2+2 fastback and added a glazed rear extension, leaving a triangular filled area, the lot finished in dismal two-tone brown and suggestive of a semi-detached hearse.”

Writing for Sports Car World, Jerry Sloniger commented: “Vignale should do well with their ’1968 offerings… [The] most intriguing (not to be confused with most tasteful) offering was a yellow and off-brown station wagon with imitation yellow fur rug in the luggage compartment, parcel rail on the roof and air conditioning. Coco Chinetti and Bob Peak expect to sell several dozen a year.” Forgoing the fact that both men couldn’t even agree on what colour the car was, it should be pointed out that the NART-Vignale offering was always going to be a one-off, despite several mentions of a mooted limited run in period articles. “There was no intention of making more than one,” Chinetti insists. “I sold the car before it was even built.”

The 330 ‘wagon’ was initially finished in metallic gold on metallic brown, and enjoyed a somewhat cosmopolitan existence. In 1977, the car was advertised Stateside for $29,500. Some time later, it was acquired by Frenchman Jean-Claude Paturau (aka ‘Patch’), an authority on watches and a collector of shooting brakes (he also owned the NART-Panther Daytona ‘wagon’ and Touring Lamborghini Flying Star II). By the time he bought it, it was finished in gold over metallic green. More recently, it passed though the hands of purveyor of wine bar funk, Jay Kay. It has since undergone yet another change of hue to the current (and rather fetching) metallic bronze.

“The NART-Vignale Ferrari was always going to be a one-off, despite several mentions of a limited run ”

THE OTHER FERRARI ESTATE CARS

The Carretto SicIliano was dreamed up by the famous (if only in Ferrari lore) Marzotto brothers, and constructed by Carrozzeria Fontana of Padova on a 212 Export chassis. The shooting brake-style body was subsequently removed to make way for an open Vignale outline. The Fontana shell was then placed on a 340 America frame; that, too, was later reconfigured back to a Spider.

Willy Felber had form when it came to modifying (some might say ruining) Ferraris. The Swiss car dealer collaborated with Michelotti on the construction of a 365 GTC/4-based beach car that broke cover in 1974. It subsequently gained doors and an estate car-like roof, before being converted back into a beach car. Felber followed through by commissioning the construction of the 365 GT4-based Croisette. Michelotti has retrospectively been accredited with building this one-off ‘combi-coupé which was first seen at the 1977 Geneva Motor Show.

The only NART Ferrari not fashioned in Italy, this one-off 365 GTB/4-based machine was styled, for the most part, by Gene Garfinkle. It was commissioned by enthusiast Bob Gittleman in 1974 and built by Panther Westwinds of Surrey. The arrangement made sense, given that Luigi Chinetti Jr of NART was also Panther’s US concessionaire. The conversion, which included gullwing-style rear Perspex panels, was carried out in the winter of 1975-76. However, contrary to popular belief, it wasn’t equipped with twin turbos.

Pininfarina produced seven specially modified 456s for Prince Jefri Bokiah which included four-door saloons and five-door estate cars. The build of these cars was shrouded in mystery, and it later transpired that the notorious playboy paid around $1.5m per car, but didn’t take delivery of one example, which was sold to a British collector.