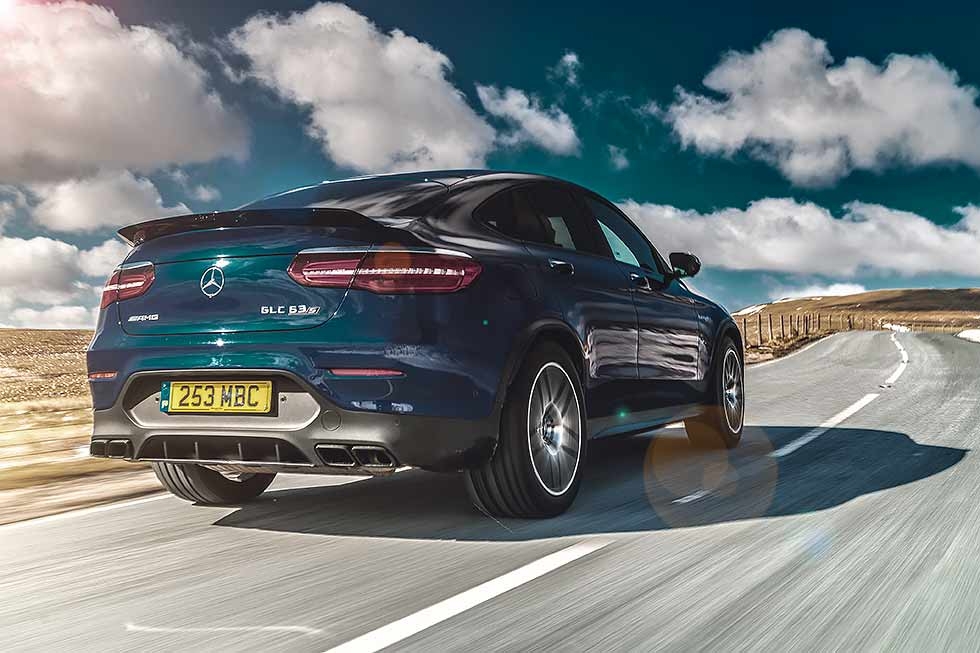 Audi has its A5, S5 and RS5 Sportbacks and BMW its 4-series Gran Coupe, but if you want a Mercedes-Benz C-class with five doors that isn’t an estate you’ll need to head down the SUV route, and if you want an RS5 Sportback rival it will need to be the AMG GLC63 S Coupe as driven here. All £76,860 of it (or £90,925 as tested).

Wearing a ‘63’ badge means, of course, that this coupe-SUV is equipped with the most utilised engine in performance car history this side of the Volkswagen Group’s 2-litre TSI unit. This AMG GLC has 503bhp and 516lb ft of torque to call upon and drives through tie company’s nine-speed Speedshift MCT gearbox and 4Matic+ all-wheel-drive system.

The standard air-suspension has its work cut out controlling a 1945kg machine capable of reaching 62mph in 3.8sec and hitting 174mph. Even more so given this car considers itself more hot hatch than hot SUV. Because, as with Porsche’s Macan and Alfa Romeo’s Stelvio Quadrifoglio, AMG’s GLC63 S doesn’t sing from the SUV hymn sheet of unresponsiveness. It genuinely feels as well set-up as any other AMG product.

Yes, the steering’s as textured and granular as a rubber glove, but its rate of response and how it directs the GLC’s bluff nose into a corner is both unexpected and reassuring for what comes next. Which is a calmness to the body control and a chassis that feels distinctly rear-wheel drive as opposed to flat-footed and four-wheel drive. The GLC doesn’t move around nor flow through corners like a C63, but neither does it bludgeon the course like a front-row forward making a break for the try line. It all means you’re not resigned to a journey of pointing and squirting along the straights and grinning and bearing it through the fun bits.

The GLC63 S Coupe may drive more like a hot hatch than an overladen SUV, but it still lacks that tactile adjustability and that sense of the driver being an integral part of the drive. So while it Impresses with how neatly it turns in, how well its body is controlled and just how sophisticated its damping is, you can’t set it up for a corner, nor adjust it once heading through it as you can in many of AMG’s more conventionally shaped performance cars.

If how it drives is perhaps a little surprising, how it goes shouldn’t be. That V8. as in so many AMG applications, will rotate its crank at close to 7000rpm with the enthusiasm you’d expect of a naturally aspirated 16-valve four-pot. And when you introduce the underside of the throttle pedal to the carpet there is always a part of you, no matter what your feelings towards such machines, left in awe as it takes off with the violence and urgency of a C63. It only really begins to let up when you are well into autobahn speeds and the aerodynamic drag and portly kerb weight finally have their say. And when it comes to slowing it all down you’d be wise to cough up the £4285 for the optional carbon-composite brakes.

Drive-My will always favour a four-door coupe or an estate over an SUV. but we also appreciate that some have no choice, in which case the 2109 GLC63 S Coupe C253 falls into that shallow pool of performance SUVs we’d suggest considering.