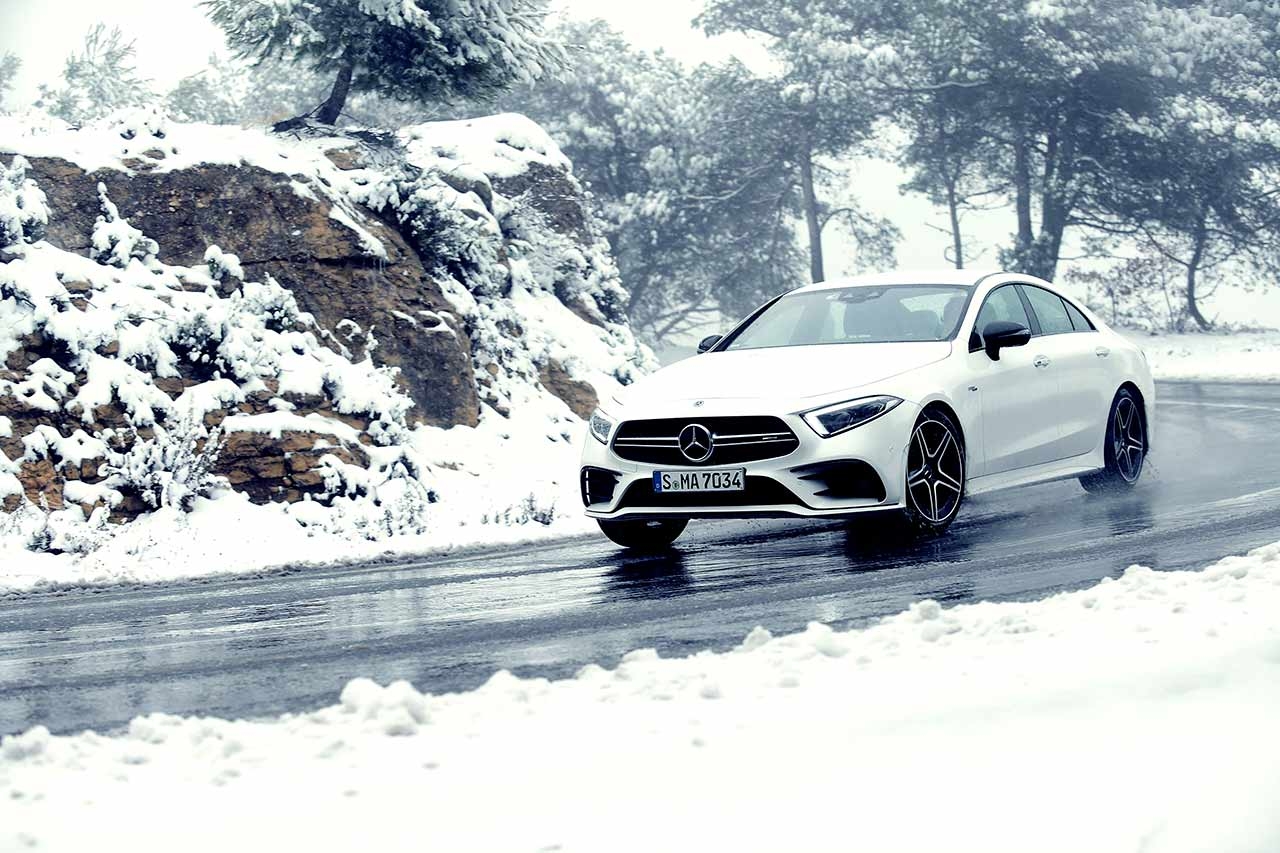 There’s always been a heightened appeal to Mercedes’ CLS four-door coupe, its more rakish body and svelte lines giving it a considerable edge in the desirability stakes compared with a conventional E-class saloon – or Audi’s A6 C8 or BMW’s 5-series G30. The original from 2004 still turns heads today, more so than its rather heavy-handed update, which gained a bit of bulk and lost the crisp lines in the process.

This third-generation CLS C257 edges back towards the clean original design and has the ability to stretch an onlooker’s neck muscles. The rear treatment isn’t as distinctive as that of the first CLS, looking a little too generic Mercedes (think C-class saloon) to me, but as an overall aesthetic it certainly beats any traditional saloon’s three-box design. Inside you’ll find more differences over the E-class with which it shares its architecture, with bespoke detailing and finishes providing the individuality. The CLS53 also comes with an AMG leather/Alcantara steering wheel as standard, and sports seats, all wearing suitable AMG branding.

However, it’s what lies behind the CLS53’s three-pointed star that’s of real interest. In the past, for its version of the CLS, AMG installed the same powerhouse V8 as fitted to the then current AMG E-class W213. That’s all changed. Instead of the 563bhp ‘hot-vee’ twin-turbo 4-litre V8 of an E63, here there’s a 429bhp twin-turbocharged in-line six-cylinder mild-hybrid petrol engine. One of those turbos is a conventional exhaust-driven type, the other a compressor driven by an electric motor – the ‘EQ Boost’ starter-alternator – installed between the engine and the nine-speed automatic gearbox. This also generates power for the car’s 48V electrical system and can deliver an additional 21bhp and 184lb ft of torque when the situation calls for it.

This AMG CLS is also the first to be offered with all-wheel drive (4Matic+) in right-hand- drive form, although unlike the E63 S it doesn’t feature a drift mode that allows you to turn off every stability- and traction-control system (and there are quite a few, thanks to a generous tech hand-out from the S-class) to create a rear-drive tyre burner. It is, however, still predominately rear-drive, only redistributing the torque when the sensors anticipate a tyre making a break for freedom.

Multi-chamber air-suspension is standard, so too is AMG’s Dynamic Select, allowing you to configure the throttle mapping, gearbox response, steering weight, exhaust note and damper stiffness. AMG’s speed-sensitive steering is also standard. Further chassis changes over the regular petrol and diesel CLS models include revised steering knuckles, and all load-bearing joints have been beefed up, too. Both the front and rear axles have more negative camber than non-AMG models, and every chassis setting has been tweaked to enhance the dynamics. It may not have a fire-breathing V8, but it certainly appears to be a bona fide Affalterbach-developed AMG. What strikes you first about the CLS53 is the more restrained way in which its engine introduces itself. Those of you used to the theatrical start-up procedure of a V8-engined AMG may feel short-changed, but you shouldn’t dismiss this powertrain on a first encounter. Switch the engine and gearbox to Sport, knock the dampers back to Comfort, and you have a discreet-sounding device in which to make indecent progress. What it lacks in V8 torque, it makes up for with electric throttle response (pun intended). Sport mode hangs on to lower gears for longer, so every throttle opening results in instant responses, with a surge of electric-boosted torque to ride before the exhaust-driven turbo spools up and the oily bits get into their stride and continue to the near 7000rpm rev limit. Again, there are no theatrics or fireworks when you reach the higher reaches of the rev band, but there’s performance aplenty to get stuck into.

Even if you leave the gearbox in auto it will respond and kick down as quickly as you could wish for, but changing manually with the wheel-mounted paddles provides a more engaging drive, although it does leave you wishing those paddles were larger when the road nips and tucks and your hands need to be a bit more mobile.

Through slower corners the CLS53’s air-sprung chassis minimises body roll, and the steering, even with winter tyres fitted, has a level of precision and accuracy that’s totally unexpected. It makes for incredibly fluid progress. Up the pace and the CLS feels decidedly more sure-footed than an E43 (which you have to work so hard to awaken), and more precise than an E63, which means the forthcoming E53 Coupe could be an unexpected gem.

Criticisms are few and far between. This is the first five-seat CLS, although rear space is tight for three adults, there won’t be a V8- engined AMG CLS, and neither will there be a replacement for the outgoing CLS Shooting Brake, Mercedes feeling the more rakish design of the new E-class wagon has those customers covered. So, if an E63 saloon is out of reach, and an E43 leaves you wanting, it’s the CLS53 for you, which is no bad thing at all.

Above left: CLS53 more sure-footed and precise than its E-class cousins. Top: cabin gets bespoke finishes. Above right: in-line six supported by a 16kW electric motor

‘The steering, even with winter tyres fitted, has a precision and accuracy that’s totally unexpected’

– Design still not as distinctive as the original, 4Matic only, heavy