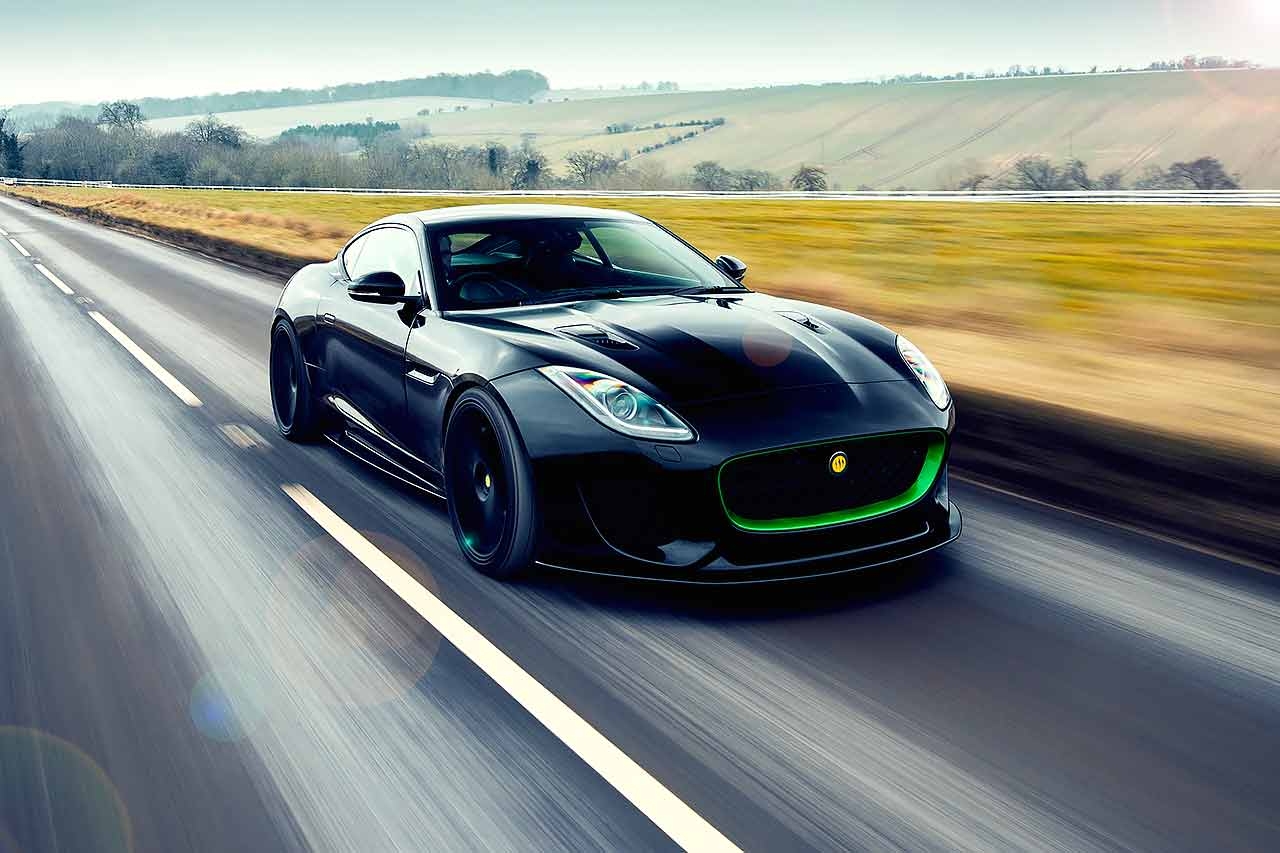 Lister Thunder. Calm after the Storm? Not if the latest creation from Lister has its way – with a soundtrack straight from hell, the 666bhp Thunder has the mark of the devil about it… Text by John Barker. Photography by Aston Parrott.

Every time we stop, at least one person appears, keen for a closer look at the car and a chat. It seems odd that they all ask what it is, because to me it’s clearly a Jaguar F-type with enormous wheels. But take a few steps back and you realise that the design of those 21-inch rims makes them look even bigger than they are, and this messes with your sense of scale so the car looks smaller. And it being black makes it look more compact still, while the painted grille surround changes the car’s face, and in place of the Jaguar badges is the name Lister. All very mysterious to the uninitiated.

There is another reason this car attracts attention: its arrival is heralded by an exhaust note so loud it sounds apocalyptic. It is comfortably the loudest road car I have driven. Even modest throttle openings produce a sound like a cataclysmic thunderstorm, while the overrun is loaded with more pops, bangs and crackles than a fourth of July fireworks display.

Welcome to the aptly named Lister Thunder, a car which a lot of people have been waiting for, it seems. The Lister name has always been associated with Jaguar, the last road car being the Storm of 1993-94, of which just four were made for homologation into GT racing. This new car, from new owners, brings the relationship bang up-to-date. The father and son team of Andrew and Lawrence Whittaker, who run car warranty supplier Warrantywise, took over Lister and all its associated businesses in 2013, and in 2014 announced a limited run of its most famous racer, the late ’50s Lister-Jaguar Knobbly. Just this January they revealed the Lister Thunder.

It makes Jaguar’s own feistiest F-type, the 567bhp SVR, seem rather tame. The claimed figures for the Thunder are 666bhp and 720lb ft of torque. ‘It came out at 670bhp on the dyno,’ says Lawrence, ‘but 666 is more evocative.’ The work involves fitting a new, larger capacity supercharger, new intercoolers and air filters and a whole new Quick-Silver exhaust, plus a remap. Lister considered breaking the engine open and fitting trick parts such as lighter pistons, but reckoned that 700bhp is the maximum from the 5-litre V8 so it wasn’t worth the trouble or expense.

This is the prototype, and the company intends to build a limited run of 99 examples, each priced at £139,950. The final car may turn out a little differently: the firm is considering making it more special by fabricating its own front and rear bumper aprons in carbonfibre, maybe the bonnet, too. The base car is a £92k F-type R rather than the more potent £112k SVR for a few reasons, the first being that Lawrence doesn’t like the SVR’s rear wing, nor does he like its suspension set-up, which he considers a little too hard. Most pertinent of all, though, is that most of the enhancements the SVR offers over the R are in the same areas where Lister applies its upgrades.

Suspension is by KW, with ride-height adjustment built in and the adaptive damping retained, while those enormous alloys are supplied by Vossen and are shod with some of the lowest profile Michelin Pilot Super Sports I’ve ever seen: 295/25 R21s at the rear, matched to 255/30 R21s up front. And a 22- inch wheel option is planned…

In black with black wheels the Thunder is a serious-looking car, and the interior is quite something, too. It’s totally retrimmed to a very high standard in Bridge of Weir leather with green contrast stitching: the seats, dashboard and door casings, and so too the roof lining, steering wheel and even parts of the boot. It’s not cheap, but, says Lawrence, it affirms Lister’s commitment to artisan crafts.

Even if you’re a big fan of the traditional V8 rumble, the Thunder will test your commitment. Pretty much from the moment you press the starter button until your journey’s end, the V8 is an audible, and sometimes physical, presence. The standard V8 F-type has tailpipe valves and a ‘loud’ button on the centre console, but there are no valves on the Thunder – it’s full-on, full-time.

The merest squeeze of the throttle deepens the note of the V8 and fills the cabin with its edgy beat, occasionally with the sympathetic resonance of some hidden part. Floor it and, well, how do you describe the noise that erupts from the four carbon-trimmed tailpipes? Imagine being on a roller coaster and the carriage behind is filled with Brian Blessed clones with megaphones, and each time you nail it coincides with a big drop.

The first few miles with the car are so dominated by the sound that even the performance is secondary, in the way you wouldn’t notice a sprained wrist if you’d broken your leg. On wet roads you’re wary of unleashing all that torque, even though there’s four-wheel drive. The tuned V8’s heftier lowdown shove tests the reflexes of the stability control system out of junctions, even with the Rain/Ice/Snow drive mode selected, which sends more torque to the front axle.

This mode also softens off the throttle response and leaves the suspension supple, helping grip and traction, but this doesn’t work too well with the lowered ride height. The set-up is a work-in-progress, but currently over bumps that I wouldn’t normally notice there is a shifff! sound, suggesting some contact between the rear tyres and the arches or arch liners. You also find yourself scanning the road ahead carefully in towns where potholes lurk, because with so little tyre sidewall the hit from a hole is so sharp that you fear a puncture, or perhaps a nipped tyre and dented rim. Amazingly, neither occurs.

Steering precision isn’t the car’s most outstanding feature, with a bit of tug and weave on bumpy roads. The amount of grip found by the Michelins and all-wheel drive under acceleration is impressive, though, particularly when the car is pointing straight. Once the roads dry out and I am able to select Dynamic mode, firming up the damping, the car is transformed – supple, but very well controlled, with no hint of a lack of clearance. It feels composed under the onslaught of all that torque, too, the grip of the Michelins improving with the rise in temperature.

Given its head, the tuned V8 is never quite as ferocious as you might expect, seemingly doing its best work low down the rev range.

However, you rarely need to use full throttle. The Thunder is one of those cars that’s deceptively fast; many times I look down and find the speedo needle 20mph further round the dial than I expect… The V8’s torrent of torque can kick the tail against the stability control, and when you switch the safety net off – in the interests of scientific endeavour – the Lister behaves just as you’d expect.

That’s to say like a rear-drive car, until the front axle gets its share of the spoils and pulls the car straight. Unless the corner is long you’ll have travelled for some distance on opposite lock before this happens. While the scale of the push is vast, throttle response is merely good. Otherwise, the standard eight-speed ZF automatic gearbox is as sharp and seamless as we’ve come to expect.

Even without its fanfare, the handsome Lister attracts a great deal of interest. The Whittakers say they are dedicated to enhancing Lister’s reputation, Lawrence adding that a look at the accounts shows they are driven by passion rather than profit. The reaction to the Thunder has surprised even them, and they are now considering Lister versions of more Jaguar models, including a rival to the upcoming XE Project 8. There’s clearly still some set-up work to do on the Thunder, and we drove this car knowing that it is the prototype. In Dynamic mode it revealed its potential, and we look forward to trying the production version, which will hopefully also have a slightly less vocal exhaust system…

‘The Thunder is one of those cars that’s deceptively fast. You rarely need to use full throttle’