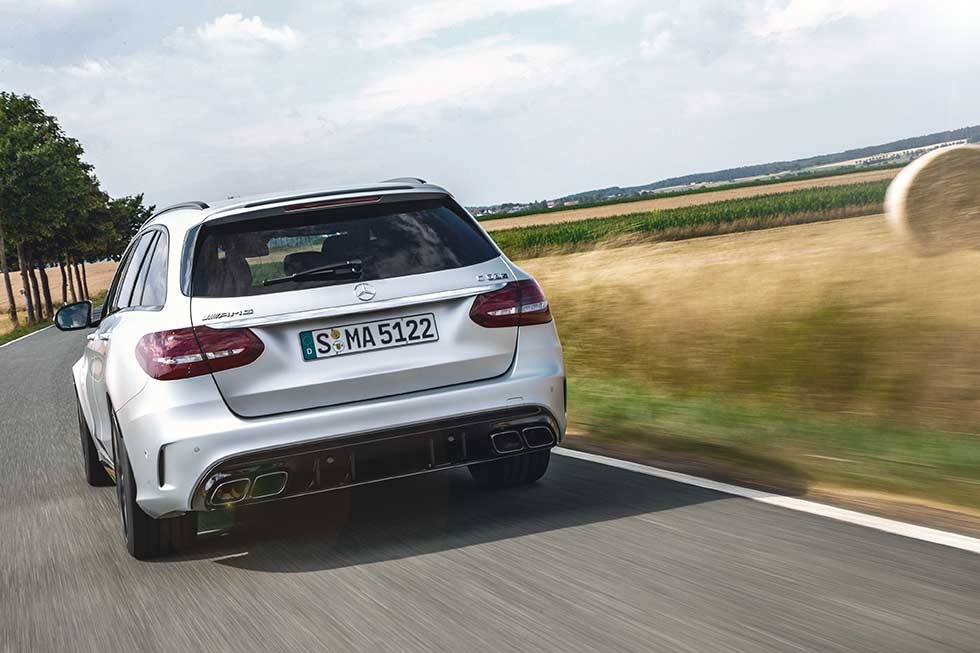 Mercedes-Benz is the car industry’s niche-filler extraordinaire, and AMG’s willingness to offer one of its bombastic derivatives in every sector the mothership operates in knows no bounds. Unless, of course, you want an AMG-fettled B- or V-class, because even Tobias Moers has a threshold for what he will ask his engineers to work on.

By far the widest AMG choice comes from the 205-gen C-class line-up, the volume seller that chases BMW 320d F30 sales as hard as it hounds Audi RS and BMW M customers for their monthly payments. And following the regular C’s midlife nip and tuck last month, AMG has presented its updated C63 range, from saloon to coupe, cabriolet to estate, with two tunes of hot-vee V8 to get stuck into: the 469bhp non-S and 503 bhp S.

You’ll need to be a 205-Series C63 fanboy – or girl – to spot the difference with this new one, though. There’s a new AMG grille and rear diffuser, and if size matters you can ditch the standard 18-inch wheels for a set of new 19-inch forged items from the AMG GT R (both sizes are fitted with Michelin’s Super Sport tyre). There’s also some tweaking to the air inlets, but that’s about it.

Inside there’s a bit more nip and a few more tucks, the biggest of which is the introduction of 12.3- and 10.5-inch TFT screens – the former for the instrument cluster, the latter for the infotainment centre. There’s a new flat-bottomed steering wheel, too, featuring touchpad controls first seen on the S-class.

You can also specify AMG’s interpretation of Ferrari’s manettino by adding a rotary mode control to the bottom of the wheel.

So far, so midlife facelift, but what about beneath the toned haunches and aerodynamically efficient wheels? Remarkably, AMG has not touched the V8. Sure, it’s been tweaked to pass the most recent emission tests, but power, torque and peak revs all remain the same. If it ain’t broke…

Dynamic engine mounts are also still standard for the S model, but what has changed is the gearbox. Out goes the seven- speed auto and in comes a nine-speed unit controlling an electronic differential that is now standard across all C63 W205/S205 models.

Also new is serious chassis and driver mode technology. The S model now gets AMG Traction Control – the same nine-stage system first seen on the GT R – and in AMG Dynamic Select there are also five predetermined driver modes, along with an Individual mode that allows you to choose the engine, gearbox, steering and exhaust settings. You also have AMG Ride Control (steel springs, adaptive dampers) to play with. Within Dynamic Select there is also AMG Dynamics, which enables you to manage the ESP settings and torque distribution to the rear axle through four further settings: Basic, Advanced, Pro and Master. Keeping up? Good.

If all this sounds like too much choice, you’re thinking along the right lines, because at times it’s baffling as to which are the best options for the circumstances. Obviously those with an account at Blackcircles will turn everything off, while those with some self-preservation will settle on something resembling Comfort damping, a Sport or Sport+ throttle map and steering with some weight to lean against if you like that kind of thing. Exhaust? Depends if you like your neighbours.

You’ll probably also choose an S Coupe when it comes to the body style, certainly if you live in the UK, but seriously, go for the estate. There is something achingly desirable about a car that offers more practicality than its siblings but without any noticeable trade-off in how it drives.

The V8 remains a modern-day turbocharged masterpiece. Gutsy, full-bodied and capable of delivering across a wider spectrum than Audi and BMW’s six-cylinder RS and M engines. Its throttle response remains un-turbo-like, its willingness to chase revs unrestricted. The new nine-speed automatic is super-smooth no matter which way the ratios are heading, and although on track the downshifts can be a little slower than you might expect (I know, I bet Lewis doesn’t have this problem), on the road it’s so intuitive and the engine’s torque so strong that third and fourth will devour most areas of the countryside.

As for how it drives, it’s just like the old C63 S, which means one of the finest all-round compact performance cars you can buy. An M4 Comp Pack may have the dynamic edge, but the AMG’s no-nonsense approach has huge appeal. The confidence it inspires, the way it devours straights and scythes or slides through corners will leave you wanting to find the long way round to everywhere.

When you need it to be, the C63 S remains an absolute thug: shouty, aggressive, driving a fine line between impeccably behaved and borderline psychotic. But it will also blend in and cover ground at a rude rate of knots to remind you why you must have a 503bhp, V8-engined, rear-drive estate car in your life.

‘The C63 S remains an absolute thug, but it will also blend in’

Above: estate shows no trade-off on the road when compared to coupe and saloon versions.

Above: new 12.3- and 10.5-inch screens plus a new steering wheel are among the changes. Below: revised grille one of the few subtle differences that mark out the updated car for keen C63 W205 spotters.

+ V8 performance, not too shouty